Gardening in America in the 1700s was pretty basic. With conditions primitive, most gardens (aside from a handful of grand estates) were utilitarian enclosures for growing vegetables and medicinal herbs. Carrots, radishes, cabbages, and onions grew interspersed with coriander and rosemary. Sometimes, when time and money allowed, plants growing beneath the windows and around the front door added fragrance and softened the exterior; hollyhocks, pennyroyal, and sweetbrier were favorites.

The layout of most gardens was uncomplicated—a central path flanked by beds on either side. Paths were just packed dirt early on, or covered with crushed clamshells or gravel. (Brick walks were used in some locales and around wealthier homes, and became a staple of Colonial Revival gardens.) Low boxwood hedges sometimes defined the perimeter—and were handy for drying bed-sheets in the sun. Fruits and vegetables provided color and visual interest, but early gardens were rarely ornamental, except for the occasional sundial. (Washington had one, accessible to trav-elers, in front of Mount Vernon.) In larger yards, horse chestnuts, sycamores, and tulip poplars (Magnolia grandiflora) provided shade. 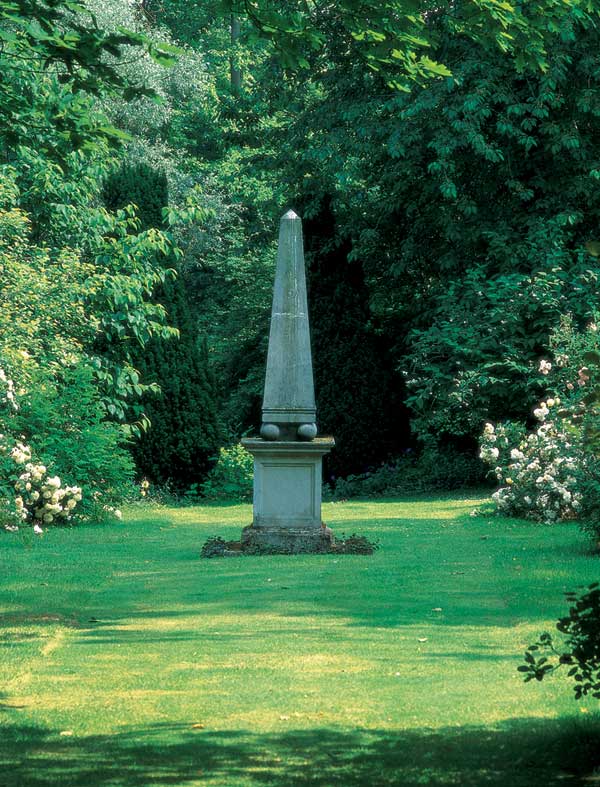 Two hundred years later, “colonial” gardens came into vogue as the Colonial Revival gained wide popularity. Sparked by displays at the 1876 Centennial Exhibition in Philadelphia and the 1893 Chicago World’s Fair, interest in American history grew, fueled by nostalgia for the past during a turbulent time of rapid growth, the Great War, and the Depression. Antiquarians such as Wallace Nutting idyllically portrayed Colonial-era homes and gardens. It was the beginning of the automobile age, and families traveling to historic sites like Monticello and Colonial Williamsburg longed for a “simple colonial” of their own.

In this era, garden structures added to the romance. Trellises, arbors, and pergolas all were encouraged. The iconographic image of the Colonial Revival garden is, of course, a symmetrical, axial layout with a sundial (now purely decorative) at the center.

How to Create a Colonial Revival Garden

Gardens in the Colonial Revival mode of the early 20th century had a classical, geometrical structure. Four essentials for such gardens:

• Keep the layout formal and symmetrical. Beds should be square or rectangular, radiating from a central axis with paths in between.

• Define the perimeters with boxwood or with a white picket fence.

• Add a romantic structure, such as an arbor draped with wisteria or a climbing rose. (The historic ‘Old Blush’ is a favorite.)

• A sundial in the center always makes a classic focal point.

Flowers: Use traditional classics, which include irises, tulips, black-eyed Susans, asters, day lilies, dianthus, foxglove, columbines, and bee balm. Try to have an old-fashioned rose or two, such as Harrison’s Yellow Rose (thought to be the rose in the song “The Yellow Rose of Texas”).

Vegetables: In a separate kitchen, cutting garden or behind the ornamental borders, plant such edibles as asparagus, beans, beets, broccoli, carrots, corn, and squash.

Fruits: Blackberries, gooseberries, melons, and strawberries would also be found in traditional gardens.