Site planning and a consistent architectural vision made sense of this unique double lot near the sea in Marblehead, Massachusetts. Architect Frank Shirley “integrated two properties and made this a special place to be,” the homeowner says. Outbuildings, two of them newly designed and built, are critical to the overall design, providing not only additional space but also protection from the street. New porches, formal elements of hardscape, and plantings tie it together.

When multiple restrictions define the challenge, a holistic design may be the satisfying result. This difficult yet beautiful site was molded by tight parameters. The main house, a ca. 1900 Victorian Queen Anne that had seen a few remodelings and additions, was better than salvageable. The pool was already in position. Two factors were immutable: on one side, a busy street; on another, the Atlantic Ocean.

The homeowners had snapped up the lot adjacent to their own, when it came up for sale. The neighboring house, sight-unseen at the time of purchase, turned out to be a derelict rental stripped of every detail. “I mean, gone,” says Cambridge architect Frank Shirley. “Every window, moulding, even the staircase: gone. It was on piers, and the furnace was underneath, in open air.” The initial plan was to turn the second house into the garage, but it was deemed “too horrific” and too expensive to save. The carriage house built in its stead holds garage space and a mudroom, with unfinished space above.

The new shed became the architectural hub uniting the property. “It has an outsize personality,” Shirley laughs, “considering it’s just 10′ x 15′. But it’s so intentional. We created a kind of architectural folly in the middle to anchor the site—it’s the sun around which the planets revolve.” The building, which one owner uses as her home office much of the year, is exquisitely detailed, boasting an English Victorian-style brick chimney with narrow, tinted mortar joints; custom French doors based on originals in the house; a cedar-shingle roof stained red.

Frank Shirley gives a shout-out to his general contractor, Boston-based F.H. Perry. “His work was of critical importance,” Shirley says. “This was a complicated project, on a fast track and with neighbors close by. His elegant navigation, and the quality of his sub-contractors, made it a success.”

A new shed is the jewel and the architectural hub of the property. The garage is behind it, on the lower slope.

A pull-off parking spot near the house remains, but the clients wanted a place to keep cars out of the New England weather. The lot configuration, along with zoning and conservation restrictions, made it impossible for a garage to be built close to the house. To make the walk from the garage to the house feel like a shorter, more interesting experience, “we designed it as a series of events,” Shirley says. “Pulling into the carriage house is already insulation from the street. Then you exit through a mudroom to a small porch, and from there to a short run of stone steps, through a gate, past the storybook shed and pool, through the formal garden and fence, to find a view of the house with its ornamental balustrade. The walk unfolds . . . it’s similar to a Japanese way of designing.”

Even with the additional lot, the site presented a host of restrictions. Zoning and environmental conservation rules were non-negotiable. The sloping site has an eight-foot drop, front to back. And, although the original lot is oceanfront, it’s also on a main street in a dense, historic neighborhood. Visual privacy and a barrier to sound were paramount concerns. “Planting trees does nothing to create quiet,” Frank Shirley says. “You do that with density, with obstruction. Thus we have the tall privacy fences, the stone walls. And buildings. We staggered the new shed, and the new garage behind it, to create an auditory barrier.

“The owner knew she wanted a fire pit, and that became a garden room next to her studio–shed,” Shirley says. Behind it is access to the carriage house.

Every element of the design, from site layout to details, has a well-considered hierarchy. Consider the design of the privacy fence. “It’s tall, at least six feet, and solid,” Shirley points out. “What keeps it in scale is breaking it up, with a gridded frieze topping the lower section—like a Victorian wall division.” 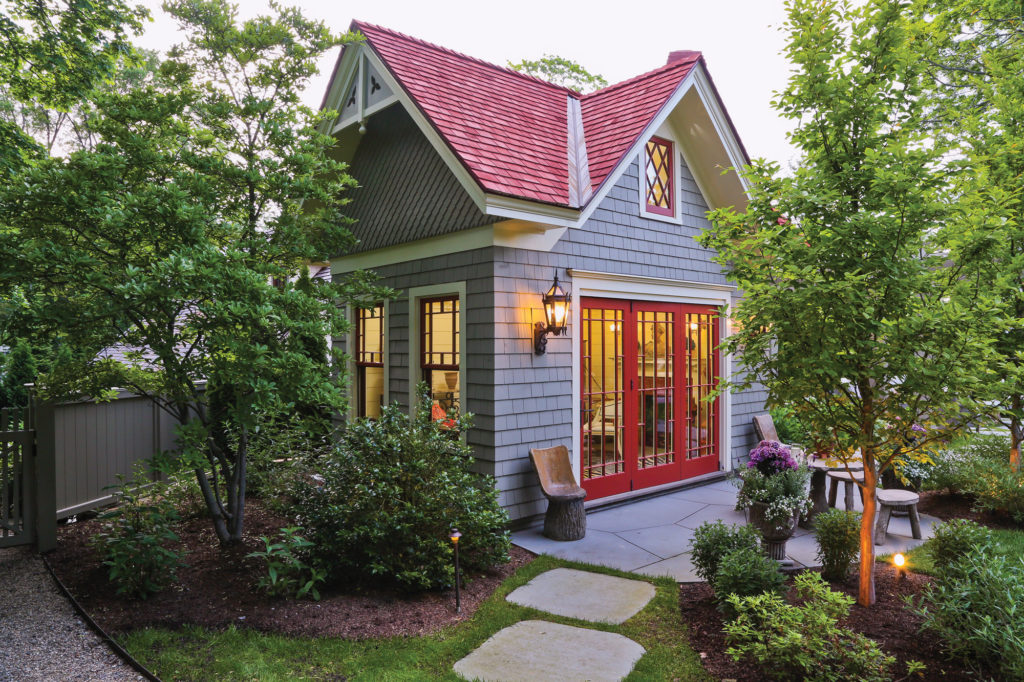 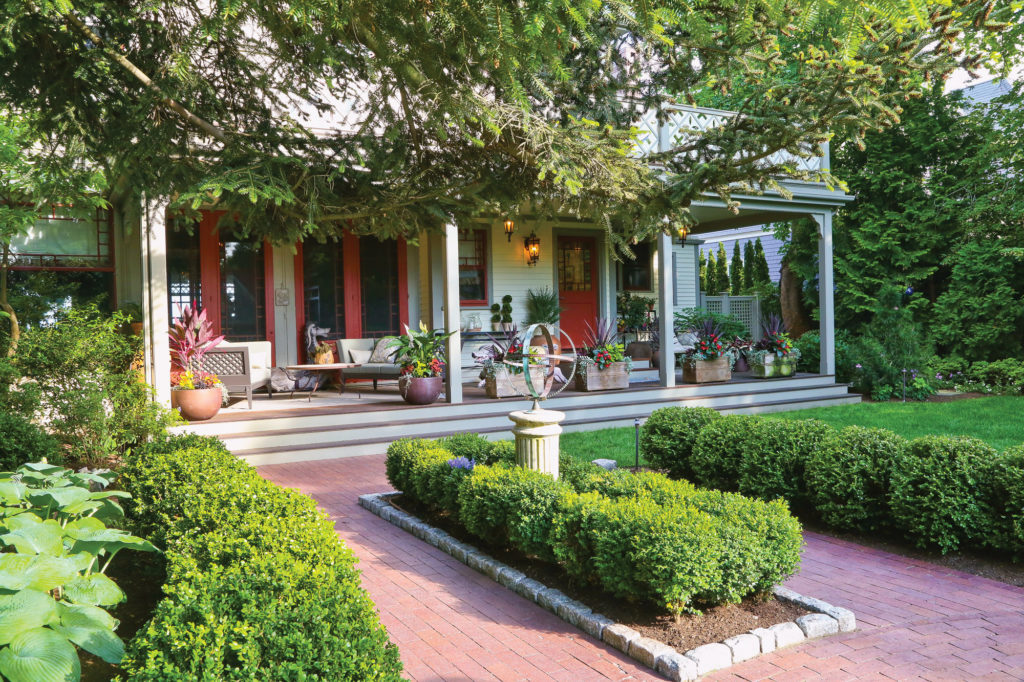 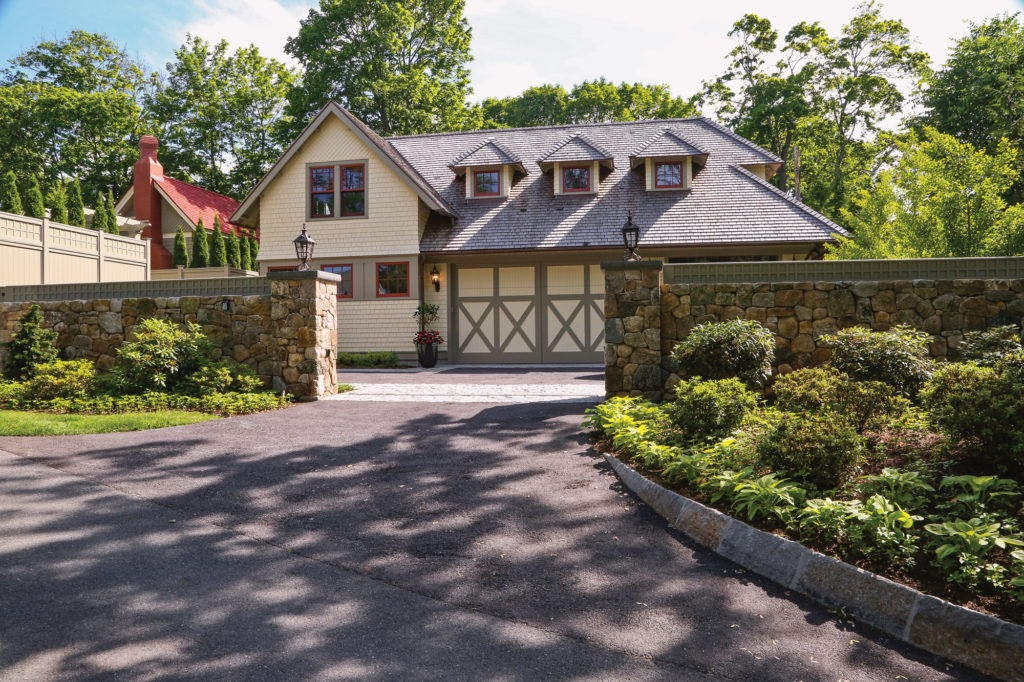 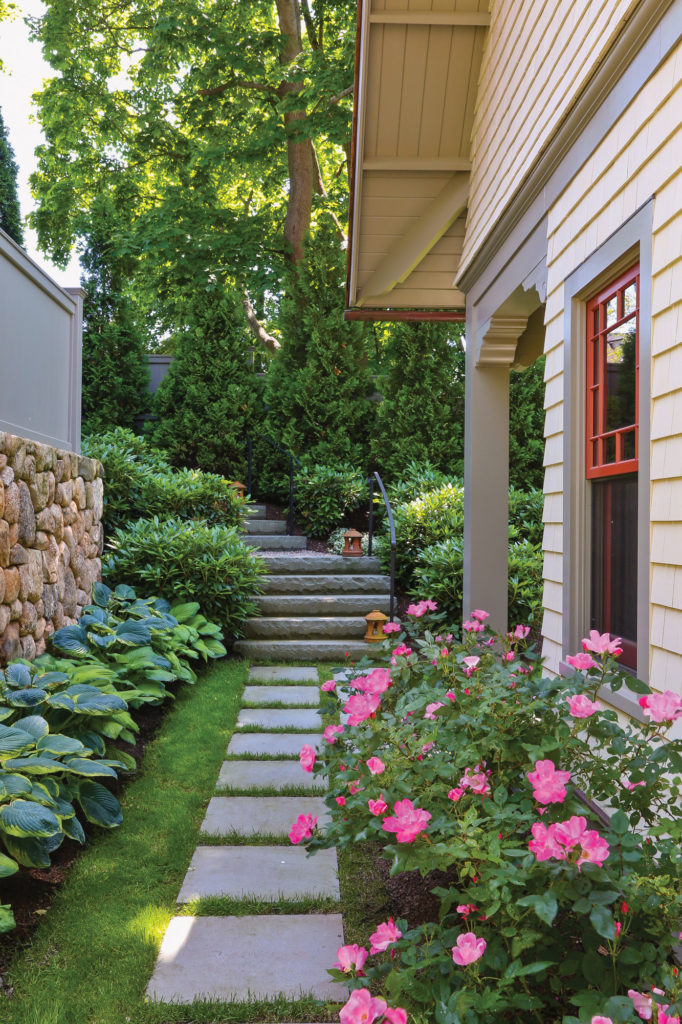 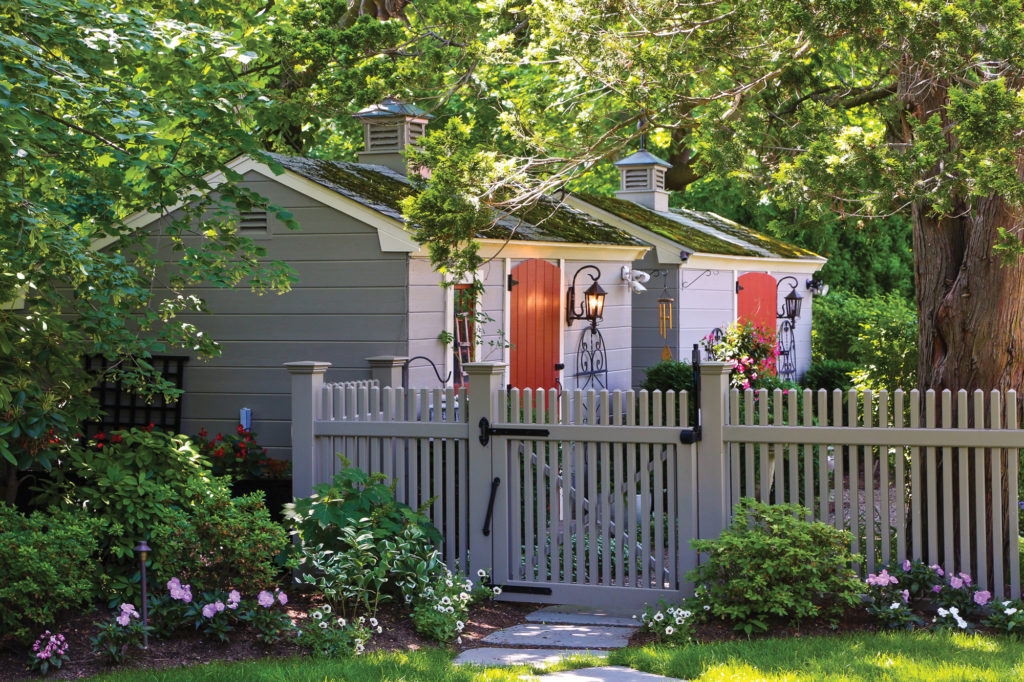 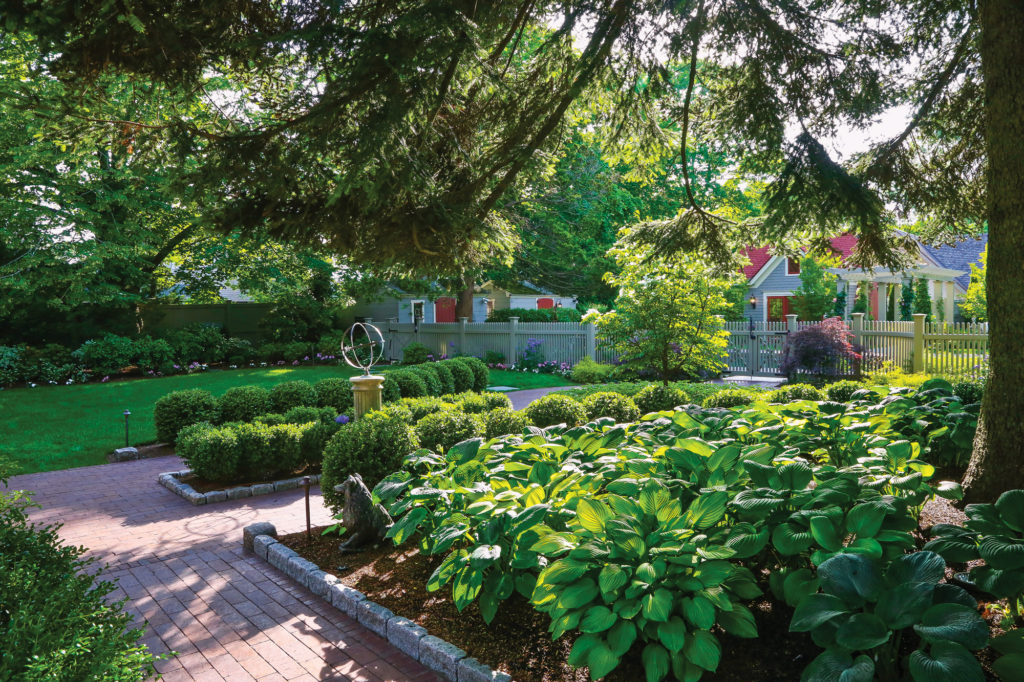 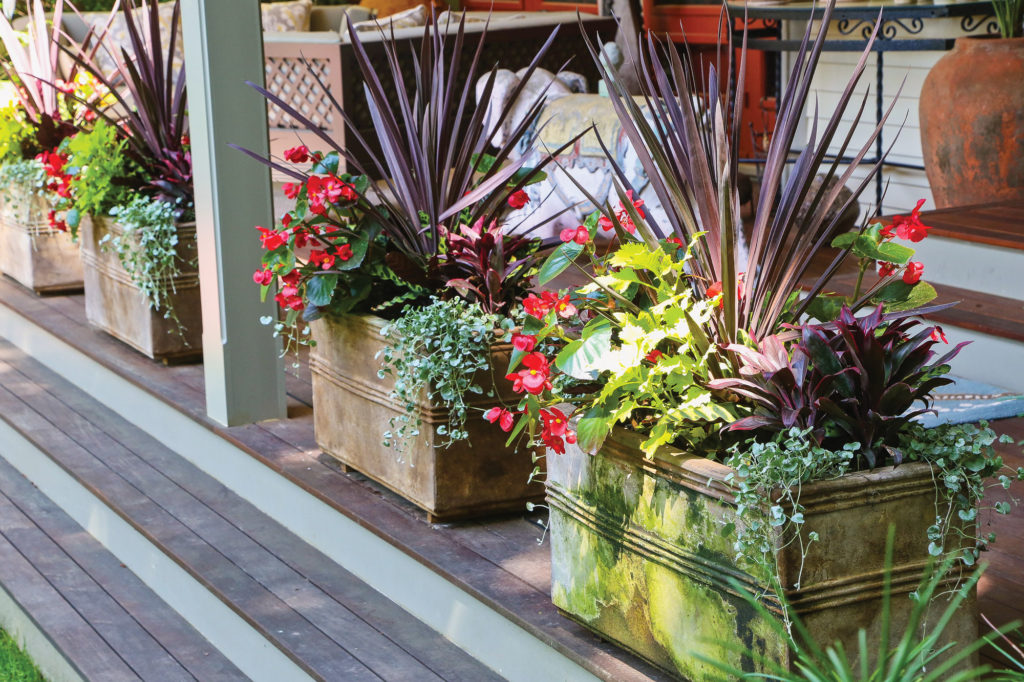 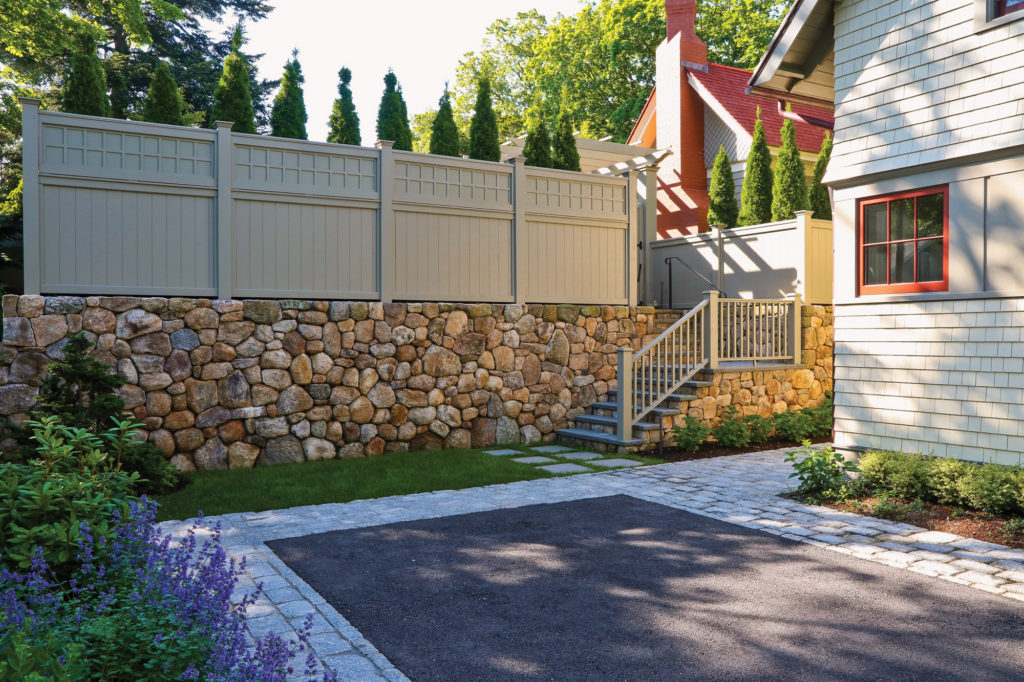 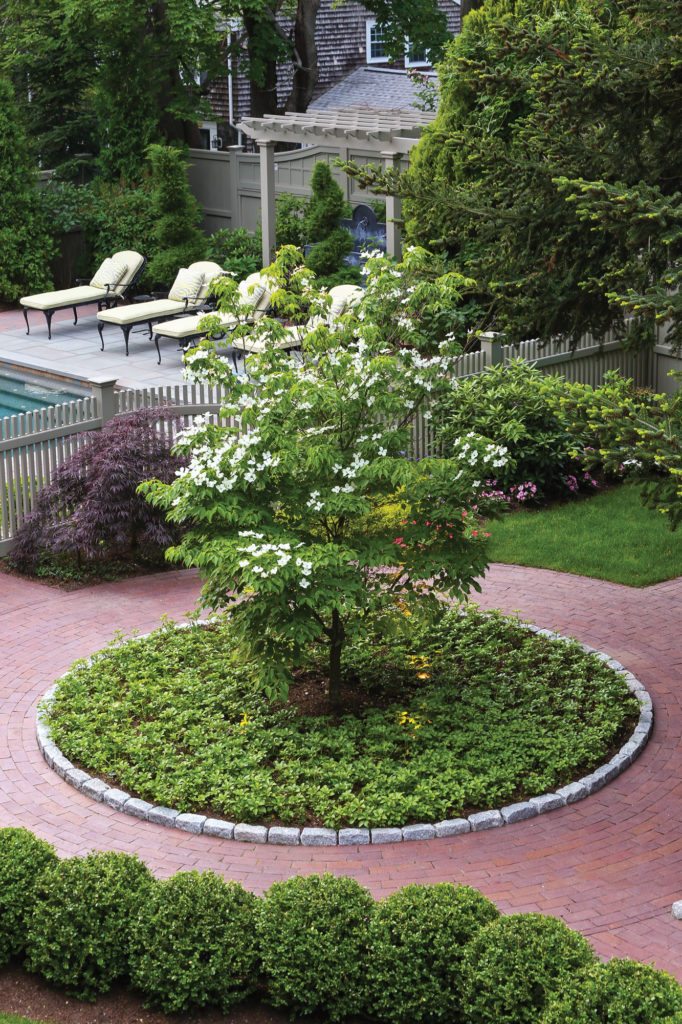 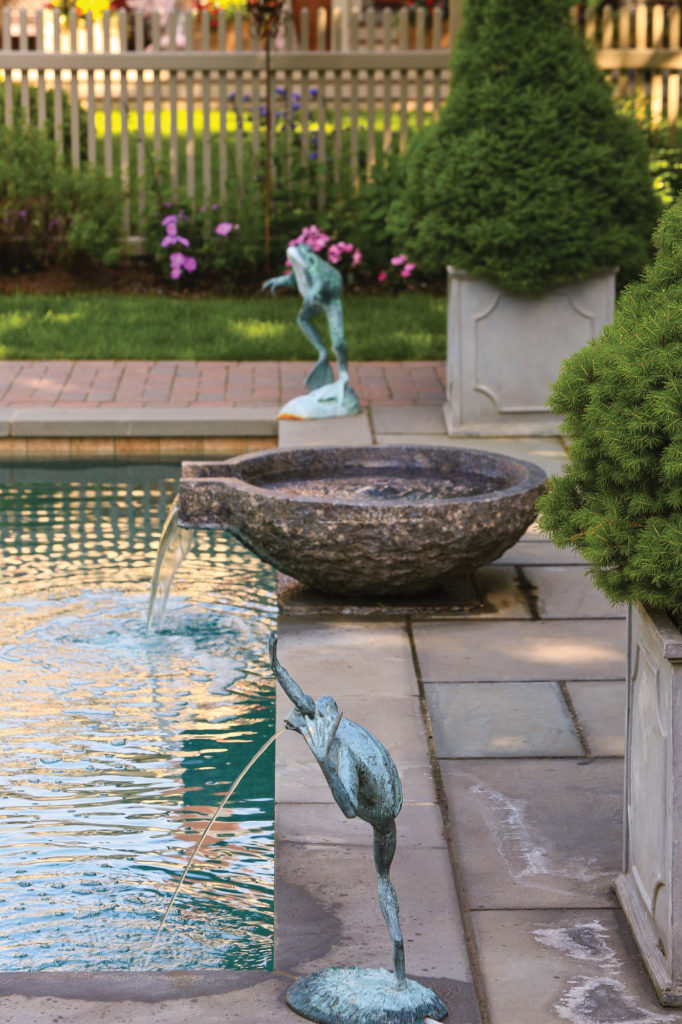 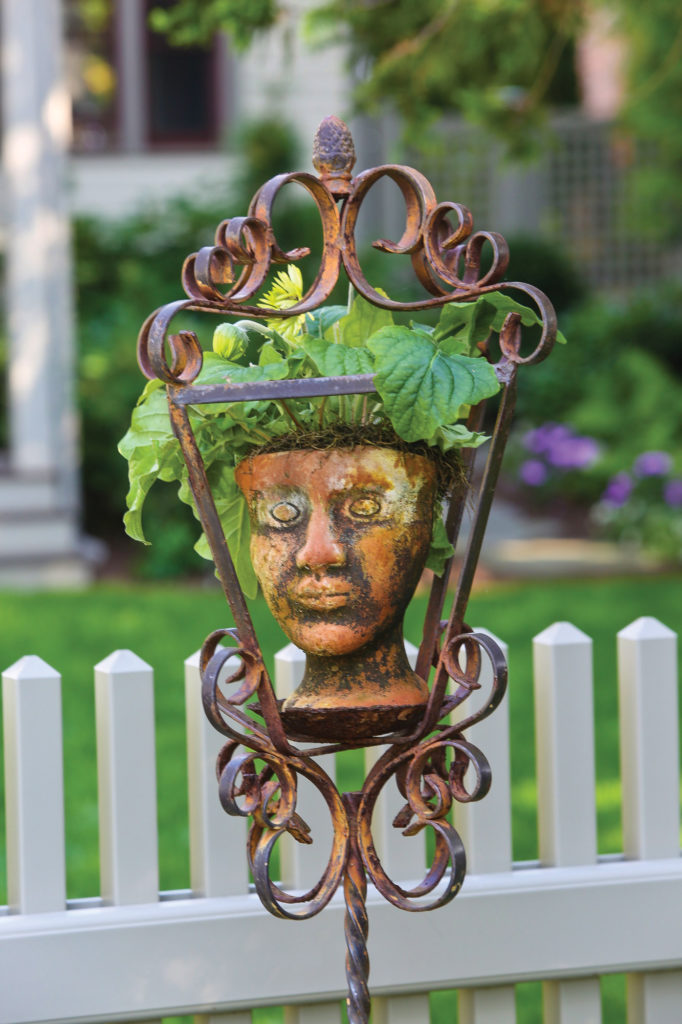 Frank Shirley Architects’ design was augmented with hardscape and gardens by the Sudbury Design Group.

Mature trees and and a shade garden occupy space between the house, one end of the pool, and the property line, where two existing storage sheds were upgraded with new light fixtures and a color sheme matching other buildings. The formality of the upper garden comes from an axial arrangement of brick paving, granite cobble edging, and trimmed boxwood.