Like early electric lighting, most early garages were plain. (Having electricity, or an automobile, was status enough.) Today the garage is expected to do more, from storing grownup toys for four seasons to providing a workshop or plant room or home office. With the cost of new construction, it makes sense to hire a designer for your project and to make the most of it. No matter whether you have a vintage home or a new house designed along traditional lines, you don’t want to end up with “a garage with house attached.”

The garage was at first a utilitarian building separate from the house. By the 1920s—when it might be built alongside the house rather than at the back of the lot—the garage was increasingly tied to the house proper by a loggia, pergola, or breezeway. A low wall between house and garage formed a courtyard (or, at least, a laundry yard). The “walled compound” look was particularly popular for English and French Revival houses. The attached garage became more popular after fear of gas fires subsided, although many codes continued to require fire walls. 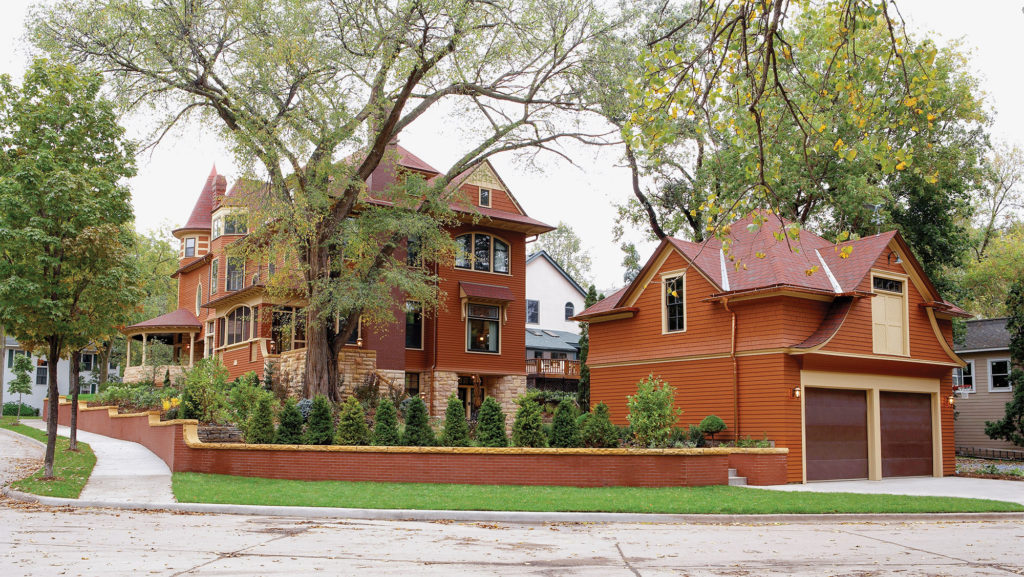 Garages for 20th-century Colonial Revival houses emulated the connected buildings of New England farmhouses. On formal Georgian Revivals and symmetrical Dutch Colonials, a garage as one wing balanced a porch-on-slab, sleeping porch, or sunporch on the other side. Soon garages were tucked under the house or hidden in irregular massing. Not until the postwar split-level did double doors boldly appear on the primary façade.

If the garage itself has little precedent as a fully detailed, multi-function space, that’s not true of outbuildings in general. Surviving barns, already offering multiple areas and storage capacity, were remade by several generations as guest quarters, or as car barns with a workshop, storage loft, and so on. Victorian houses may have had a carriage house later converted to garage space. Both are common scenarios used by today’s designers for adding a garage to old houses. Bungalows often had a garage from the beginning; builders’ catalogs as early as 1909 include garages with new homes.

Fancy garages are nothing new; they were built all along for wealthy. By the Twenties and certainly the Thirties, suburban owners could choose from garage designs that matched the house: Mediterranean, French, Colonial Revival, Dutch Colonial, or English. Craftsman-influenced styles were easy to adapt to garages, with their wood shingles, simple framework, and lattice or a pergola. A Japanese look was not uncommon. “Spanish” garages had tiled roofs. Garages have always had windows for ventilation and light, often mimicking those of the house.

First of all, if you have an old garage that’s usable, even if doesn’t match the house, consider choosing paint color and trellising to make it attractive. You’ll see garage doors painted to match the trim color of the house, or even left white from the factory. But painting an ugly or too-big door the body color will help hide it. (New premium doors made of hardwood are sometimes varnished for the natural-wood look, adding furniture quality and a lovely color to the doors.)If the doors are attractive, do paint them in the trim color, perhaps with panels reversed to body color (or a shade of the trim color).

If you are building a new garage, decide which of these categories you prefer: a simple, utilitarian garaging space, or a garage that stylistically matches the house. Will it be at the back of the lot, semi-detached, attached, or integrated into the house? If fitting in matters to you, walk or bicycle around town, peering down alleys and side streets. Note materials, garages’ relation to their lots and houses, roof types, door styles, and details. Remember that the new building will be close to the old, so match the basics and even try to incorporate some salvaged windows, millwork, or ornament.

An architect will take a sophisticated approach to garage design. A designer may be able to integrate car parking into the existing house, as a modest rear extension—or under it, in space excavated from the basement or patio. A designer understands that the garage has to be subservient to the main building, by means of lower height, a setback, or locating it at the rear or side of the house. Details are designed to be related to the main house but simpler, not fancier.

Appropriate design goes beyond aesthetics to solve site problems. The garage can bridge a slope, hide an unfortunate view, or block road noise.

However plain or fancy, the garage will be judged by its doors. If they out of proportion, obviously modern, and clunky rather than stylish, the building will look wrong. The inherent problems of swinging doors (they sag and get blocked by snow) led to invention of the segmented door that retracts into the garage above the vehicle. Today’s manufacturers go to great lengths to create the impression that their apparently old-fashioned doors look like they swing (or slide, or fold), even though they offer the convenience of an overhead sectional door—and respond to the remote-control opener. 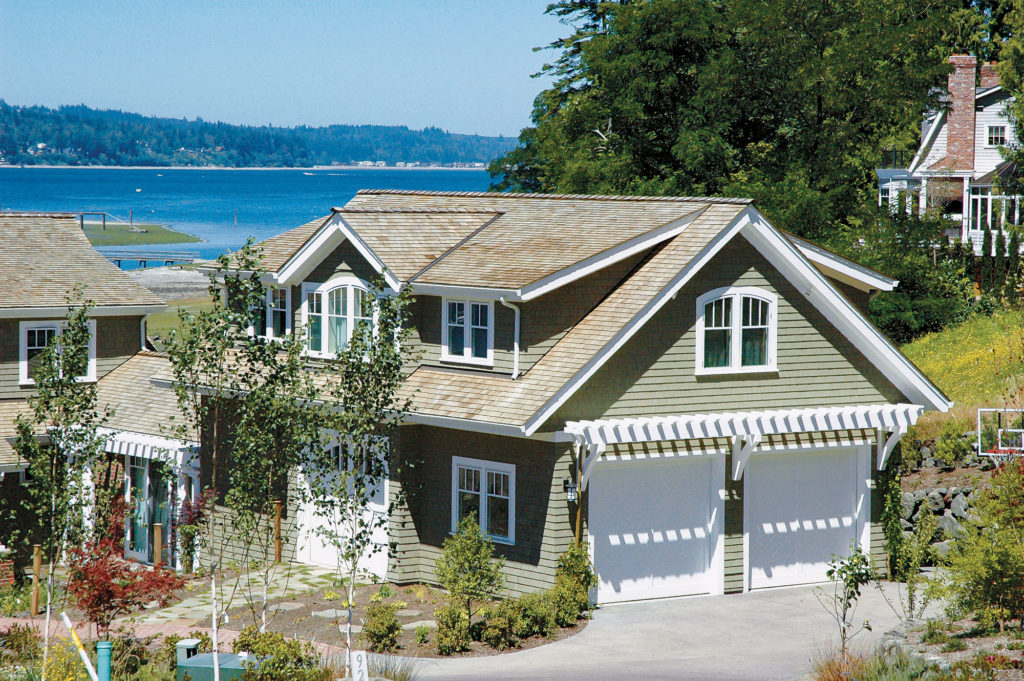 The Garage as a Carriage House

The original carriage house was dilapidated: Early on, horses had taken their toll, while, more recently, changes to accommodate an RV had destroyed the historical character. “The new homeowners saw a fun, quirky old building worth saving,” says Cambridge, Mass., architect Frank Shirley. His design adds vehicle storage, as there are four drivers in the family. A game-room getaway for teenagers and a private retreat for guests fill the loft area above the garage bays.

Historical design makes use of architectural features to add style and dimension to a garage meant to blend with an old house. Corbels, brackets, siding and shingle details, pergola extensions, and window boxes are added to make the building more attractive. Period lighting is the finishing touch.

Until recently, the problem with stock and manufactured garage doors has been their flat, dimensionless appearance. That’s changed since the introduction of such elements as true divided-light windows, V-groove panels, cross braces, and better hardware.