There’s a stampede they call spring in Connecticut. It starts tentatively with a courageous carpet of bulbs, then gathers gumption to explode with flowering shrubs and a leafy canopy overhead. It’s a celebration, an ovation—and it’s just the sort of first hurrah that Priscilla Hillman loves. The garden is why she and her husband, Norman, packed up and moved when the 1830 house around the corner went up for sale.

The Hillmans had been eyeing this house for a while. They liked the smart flowing dimensions of its 1870 update and its Colonial Revival addition. They admired the way it modestly sinks back into its setting rather than toeing the street. It has ample space, but the rooms aren’t yawning; it has a kitchen they could have fun in (they had a playful ode to the 1940s in mind); it had a laundry alcove where Priscilla might hang her linen collection. Sunbeams enter at all angles, illuminating every room for an upbeat temperament perfect for houseplants. But the clincher was the presence of all those trees.

Wrapped in a breathless froth of arching apple-blossom limbs with crabapple sparks, the property has a flirtatious “come hither” presence. Priscilla took the bait. She coined a phrase for the feeling evoked by this house of her dreams: “careless rapture.” 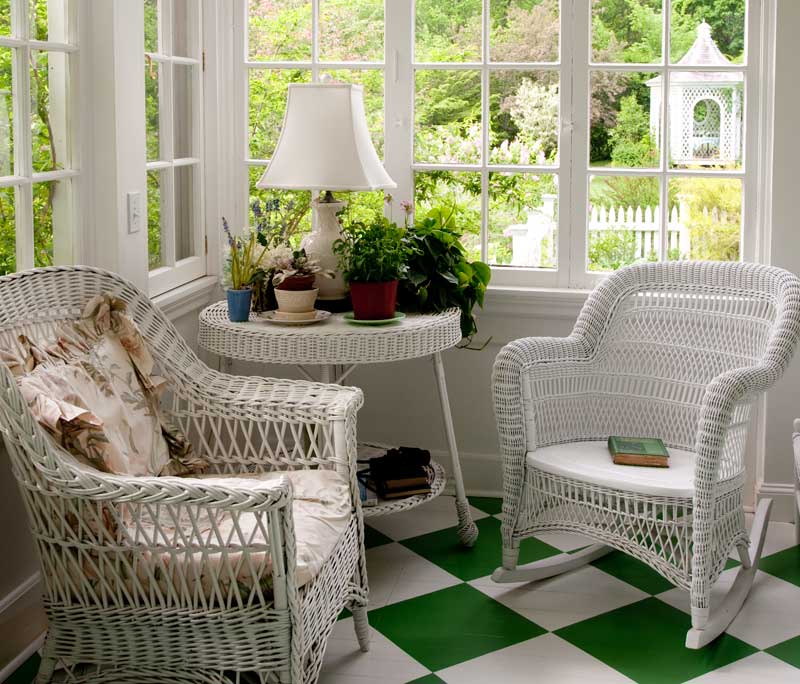 When the Hillmans took possession in 2005, it was, of course, an “I love it, it’s perfect, now it needs work” affair. For the two acres surrounding the house, Priscilla knew just what she wanted—more of the same. More apple trees and more crabapples … and lilacs, forsythias, bridal-veil spiraeas, and the whole romantic list of 19th century flowering shrubs. And she wanted perennials, her favorites: violets, peonies, forget-me-nots, irises, lily-of-the-valley, hollyhocks, and hostas. She didn’t have a master plan, but she had a mood in mind.

If Priscilla Hillman has a romantic view of gardening, blame it on Elizabeth and her German Garden, the 1898 classic by Elizabeth Von Arnim. “I don’t read novels; I read and reread garden books,” she says. “I’m crying by the time I finish my annual reading of Celia Thaxter’s An Island Garden.” She watched her father, a newspaper editor, work in their garden in the evenings. “If I’d been a man with a good back, I’d be a gardener,” she avers. As a young mother, she worked the soil. Now Priscilla leaves the heavy lifting to her son, Glenn, who is a landscape designer and an artist in the family’s collectible figurine business.

The trees around the house are commanding, but they needed to frame focal points. So Priscilla asked Glenn, who studied architecture, to design a gazebo. Then she put up birdhouses, a fountain, and finally a child’s playhouse beside an outdoor dining table in a knoll by the stream.

With fruit trees in bloom, it’s a beautiful scene outside—one that’s echoed indoors. Not content to leave the “careless rapture” outdoors, Priscilla continues her dialog with nature in every room. Even in Connecticut’s worst weather, the place has the feel of a garden. Houseplants, garden tools, seed packets, birdhouses, straw hats, trugs, terracotta pots, flower-arrangement frogs, and you-name-it (“I haven’t found a watering can I didn’t love”) are artfully arranged in vignettes in porches and on tabletops.

Not surprisingly, Priscilla explored interior design and marine biology before choosing fine art as a career. She puts all of that into service, taking “nature rides” several times a week, driving slowly about the countryside, looking for inspiration.

“Whether it’s a lamp or a houseplant, my mom picks a time period to go back to,” her son explains. She’ll put palms, ferns, and primroses beside banker’s lamps and Remington typewriters. It wasn’t always that way. In Priscilla’s newlywed home, she invested in contemporary furniture. “But fashions moved so fast, ‘modern’ always felt dated,” she says. “I couldn’t keep up. It was like trying to catch a train that was going faster and faster.” Fortunately, her father was fond of antiques and urged them on her. “They felt so homey,” says Priscilla. Before long, she was going to the Rhinebeck Antique Fair and similar events.

The garden theme also came naturally. Connecticut has a brief growing season, leaving Priscilla bereft of garden pursuits during long lulls. In previous houses she’d explored the indoor/outdoor merger that’s an art form here. She saw how perfect it is to put the softness of fern fronds next to an old wood birdhouse. Priscilla and Norman even created a garden room with a potting bench. They removed screens from a porch, added heat and windows, and created an indoor garden of ferns, primroses, peperomias, and forced bulbs—especially hyacinths. It’s low-maintenance, she insists: “I know my limitations and steer clear of citrus plants that sulk and then attract bugs.” Airy and bright, the house has the feel of outdoors.

Check out these tips on how to create a bountiful cutting garden.

How To Design a Bungalow Porch

Building A New Porch Railing for a 1920s Home