Even before she married Kevin Denton, Lynne wanted the 1747 Hall Christy House. It was an orphaned colonial Dutch house, all boarded up and forlorn. “I want that house,” Lynne told her fiancé; “he married me anyway.”

In truth, Kevin had found a fellow antiques aficionado in Lynne. They met in college when Kevin was getting his law degree (which would come in handy during the “adoption”). Meanwhile, Lynne was studying architecture (which one day would help with the restoration and garden plan). They married, Lynne started an antiques business, Kevin began to practice law near the town where he grew up, and life went on. But Lynne never forgot the old house.

She realized her dream when a gun club acquired the property. The club had no interest in the structure, and Lynne wanted to take it. But even after the sale was underway, years slipped by before the hunkered-down building could be dismantled and re-erected in New York’s Hudson Valley. There was nothing on the land the couple had acquired—a five-plus acre field with nary a tree or shrub. Without the history-inspired gardens that Lynne envisioned, the house would be as lonely as before. The Dentons placed the house in the middle of the field rather than at roadside. They planned a long, leisurely approach that let the modern world slip away, creating a kind of time warp as one approached the front door. Lynne anchored her jewel in a lush, carefully laid-out setting of floriferous gardens and ponds. Amazingly, even the pool seems apropos. 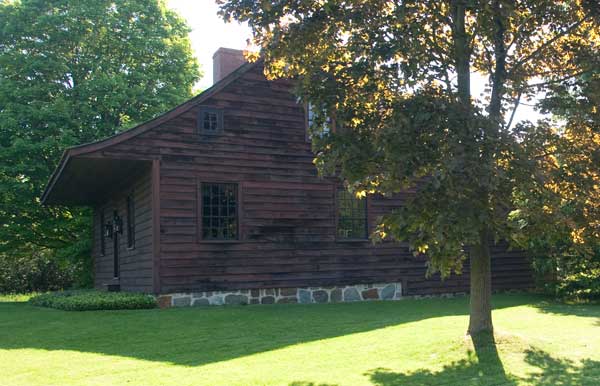 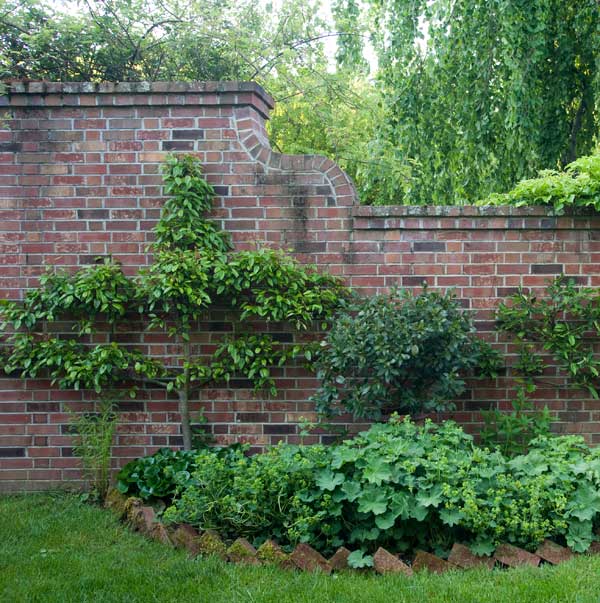 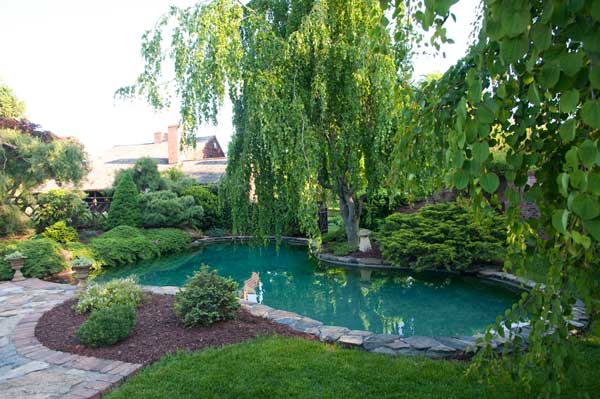 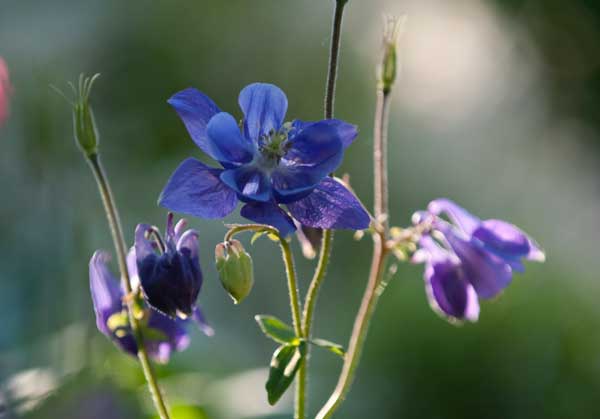 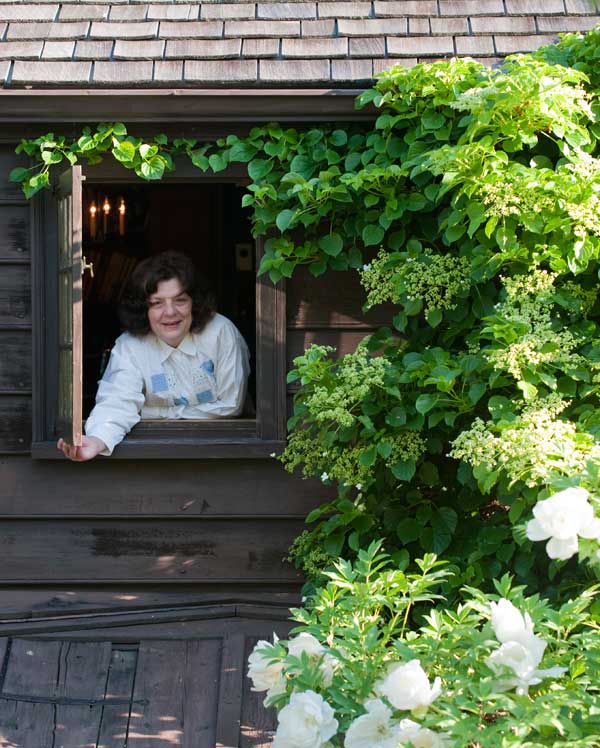 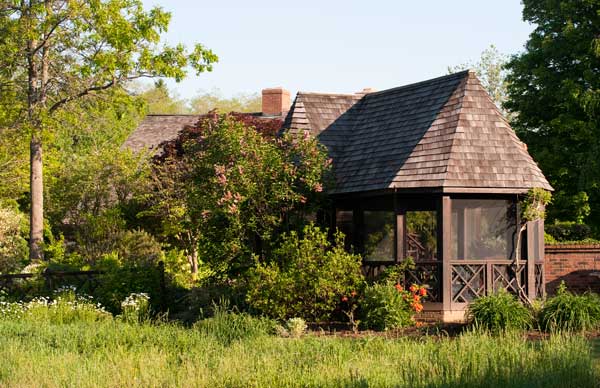 Lynne’s background in architecture helped her relate the house to the planned gardens. Like so many old houses, theirs features frequent steps up and down between rooms. The interior is a maze of spaces with narrow hallways. Lynne translated the connecting corridors and rooms into the garden plan, using walls, fences, brick pathways, and open patios. She and Kevin themselves installed 10,000 bricks in a meticulous herringbone pattern, and built the walls stone by stone.

The Dentons acquired the 1750 Skidmore House “for parts” when they were restoring the main house. The restored shell of the old gambrel became a garage and potting shed. The area immediately around the houses was enclosed by low walls—and not just for looks. Walls and fences also serve as a partition between the cultivated domain and the wilderness beyond; the Dentons hoped that deer would be content to graze the outer field without pestering the inner sanctum. (That bubble was quickly burst, and a camouflaged deer fence rings the entire property.) The surrounding meadow is part of the scene; in spring, it is awash in buttercups, and Lynne fancies that the buttercups become fireflies as summer unfolds.

The couple called the restoration a “five-year plan,” but creating the garden took much longer. The project started with a mature maple tree that had outgrown a nearby car dealership, which the couple moved (another adoption). Other trees followed: sycamores, river beeches, lindens, katsuras, tupelos, and a magnificent, weeping European beech that cascades beside the pool, helping it merge into the property and blurring the lines between eras. Lynne worked with shrubs and evergreens to integrate the man-made ponds that were part of her master plan.

“I grew up helping neighbors bring their cows in at the end of the day,” Lynne says about her childhood in an agricultural region of Upstate New York. She had an image: flowers, coreopsis and veronica from Lynne’s grandmother’s garden for starters. Like her grandmother, Lynne loves the color blue, so there are many larkspurs. A white garden is directly across from the kitchen win dow. Lilacs, hydrangeas, iris, rhododendrons, hostas, ferns, Jack-in-the-pulpits, deutzias, and other stalwarts reinforce the feeling of wellbeing.

Need help figuring out what to plant in your garden? See our list of the best hydrangeas for historic gardens.

Old houses tend to be dark and close. Dining terraces, pool-side chaises, and garden benches open the floor plan to outdoor rooms full of light. For design cues, Lynne turned to gardens she has visited: Westbury Court, Sissinghurst, and Inverewe Garden. When they decided to add a gazebo, Lynne drew an amalgam of the Karlsmost Bridge in Prague and a bus stop at an inn in Charlottesville, Virginia. Somehow, it looks Dutch and period-friendly.

The Dentons collect water from their roof and pump it into the vegetable garden. Lynne wanted a wildflower dell, which she created around a pond at the far end of the property. It took Lynne and Il Doge, that era’s golden retriever, a whole lot of digging and weed wrestling (at which the dog excelled) to clear the land for the intimate tableau now filled with wild ginger, azaleas, tiarellas, Japanese maples, willows, and irises.

Il Doge is buried beside his pond garden. Today Le Comte de Rochambeau (Robo, for short), another golden, drags toys around the brick paths. The Dentons have put their masterpiece on the market to fulfill another life dream: to move to France and buy an old house there. No doubt it will have glorious gardens once Kevin and Lynne dig in.