When the Arts & Crafts movement emerged near the dawn of the 20th century as an alternative to the mass-produced finery of the Industrial Revolution and the excessive ornamentation of the Victorian era, its trailblazers emphasized a connection with nature as one of their key tenets. “The healthiest and happiest life is that which maintains the closest relationship with out-of-doors,” Gustav Stickley wrote in his 1909 essay “The Craftsman Idea.”

Not only were Arts & Crafts houses designed to be simple and open, with plenty of windows to let in light and air, but the surroundings of the home were considered just as important as the house itself. Today, thanks to a wealth of new Arts & Crafts-style products made specifically for the porch, yard, and garden, it’s even easier to bridge the gap between indoors and out. From mailboxes to path lights, door knockers to house numbers, these fixtures fill the need for practicality while still reflecting the movement’s core principles—handcrafting, simple design, and high-quality materials.

A front door is always a statement-maker, and this is especially true on Arts & Crafts homes, where entry doors tended to be wide and were often embellished with sidelights, transoms, art glass, or a broad horizontal shelf. Accompanying door hardware, cast from metals like brass, bronze, or iron, was simple yet beautiful. A substantive door knocker was often a standout on front doors—positioned at eye level, it defined a visitor’s first interaction with the house. As such, Arts & Crafts door knockers were designed to make an impression. They were heavy pieces of hardware, in shapes that often echoed the geometric lines of the house. Reproduction door knockers, sturdily constructed from materials like raw copper and cast iron, faithfully emulate the spirit of the originals through details like hand-hammering, squared-off shapes, and geometric cutouts. 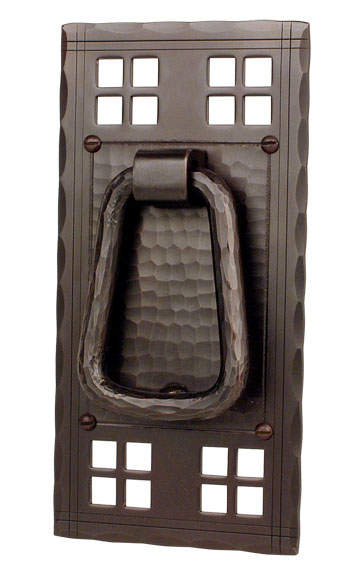 Indoor Arts & Crafts light fixtures were showpieces of fine handicraft, made from durable wood or metal, with shades in a range of natural materials like glass, mica, and shell, and crafted using a variety of techniques, including hand-hammering, cutouts, soldering, and etching. Although outdoor fixtures of the era would have appeared mainly on porches or as lanterns illuminating low walls abutting outdoor spaces, today there’s a cottage industry in Arts & Crafts-inspired path lights. While such all-weather fixtures need to be sturdier than their indoor counterparts, they easily showcase the same attention to detail. Mounted on piers or hung from posts, path lights might be supported by a wide column of river stones, crafted from wrought iron or hammered copper, accented by mica or art glass shades, or finished off with a filigree of designs mimicking natural vistas (treelines, mountains, clouds). Many are produced with weather-beaten patinas, and exposure to the elements only enhances the back-to-nature aesthetic. Most of today’s designs also come with a modern bonus—they can accommodate environmentally friendly compact fluorescent lightbulbs. 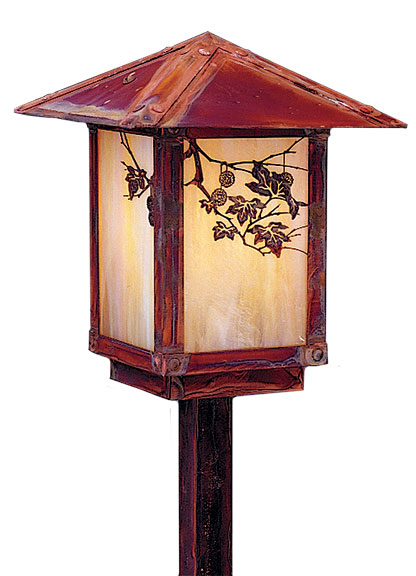 The house numbers crafted by modern artisans represent a perfect marriage of traditional Arts & Crafts details. Dard Hunter’s signature Arts & Crafts typeface—which he developed by hand over a period of four years until it completely captured the artistry of the movement—often makes an appearance on modern house numbers. Coupled with the hand-hammered copper that became the signature of the Roycroft artisans, the numbers convey an immediate note of authenticity. The work of period tile makers like Rookwood and Grueby also lends inspiration with its emphasis on natural shapes, patterns, and colors. Today’s studios carry on this tradition, borrowing the same ceramic techniques to create numbered plaques. These tile numbers can be embellished with reliefs depicting natural motifs, or surrounded by a simple, broad wooden frame. 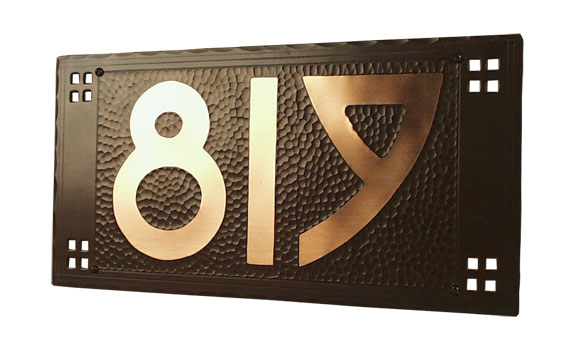 No home is complete without a mailbox—and luckily, there are enough period-inspired designs out there that owners of Arts & Crafts homes don’t have to settle for generic steel boxes. Although rural homes of the era would have had post-mounted mailboxes facing the road, most houses had a mail slot or box on the front porch. Regardless of where they were mounted, original Arts & Crafts mailboxes were usually made from steel, brass, copper, or wood, and they were often smaller than the current standard. Today, artisans have taken inspiration from a variety of the movement’s key aesthetics—from cutouts to filigrees to aged patinas—to create mailboxes in a wide variety of shapes and colors. The choices range from simple copper boxes (either wall- or post-mounted) embellished with basic details like rivets, studs, and geometric vents, to more artistic interpretations featuring plant and animal motifs, which hearken back to the movement’s emphasis on the outdoor world. 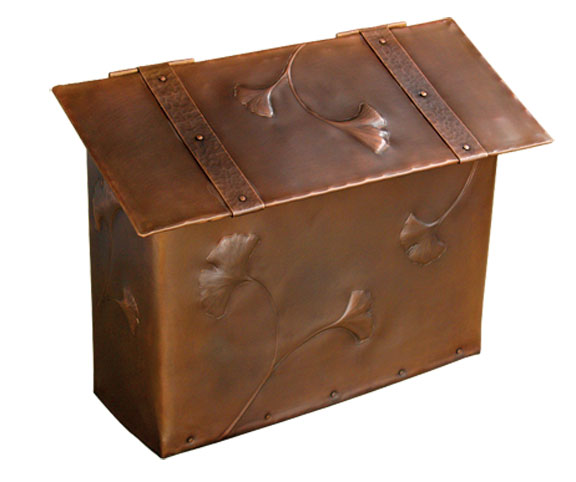