“Watch Hill, Rhode Island, has a lot of period houses, built at the turn of the century, with staff and servant quarters,” notes Keith LeBlanc, principal at LeBlanc Jones Landscape Architects. They were intended to serve as summer homes “with a little more of a formal nod.” This turn-of-the-twentieth-century, Shingle-style home by Hammer Architects is no exception.

From the beginning, LeBlanc and his team aimed to preserve the historic nature of the house while simultaneously updating its environs to accommodate modern coastal living. To do so, he notes, is “the fine line we walk as designers.” The home sits one lot inland from the waterfront proper, with Manatuck Beach at the end of street. Suffice it say, the view to the ocean was paramount.

The architects had wrapped a new porch around the side of the house to be able to open up the interior layout. “With that new addition, and wanting to keep the ocean view open, that’s how the approach worked,” notes LeBlanc. “It’s really a minimal garden directly in front of the house—it’s more about being on the porch and looking out.”

In fact, most of the gardens were approached from that perspective: on the porch, viewing the ocean; on the porch, looking toward the front yard; on the porch, enjoying the new garden (a perennial and shrub mixed border in front of a tightly clipped privet hedge)—it was all designed so as not to disrupt vistas seen from the elevated porch.

Throughout the landscape, architectonic plantings are softened with naturalistic borders, made so with the incorporation of native species. “We like to interject native plants, even though they are not as showy,” says LeBlanc, noting, in this case, they are beach-side appropriate. “It really helps the garden fit into a more natural environment.” Adjacent to an isolated freshwater wetland, the plant palette along the naturalized edges of the property includes native plants that can take wet and salty seaside conditions, such as Acer rubrum (red maple), Ilex verticillata (winterberry holly), and Clethra alnifolia (summer sweet). Of the front-side plantings LeBlanc says: “We didn’t want [them] to be so strikingly different.” Hence, the mix of natives with more ornamental species. “To be consistent, we picked out spots for interjecting non-native perennials.”

A new stone wall in the front yard helped create a plinth of lawn that was then hemmed with curvilinear planted beds. Naturalistic stairs descend a slope from the house to the backyard, complementing the building’s stone cladding. The team opted to keep a crisp privet hedge for screening the street, as well as to frame the less tame plantings. To the south side, they applied the formal language of the architecture to a new bocce court and vegetable garden. “As landscape architects we know [vegetable gardens] sometimes get kind of messy,” notes LeBlanc. The hedges add a structural element and link it with the larger landscape and design. “It can be as messy as it wants to be and still look good.” 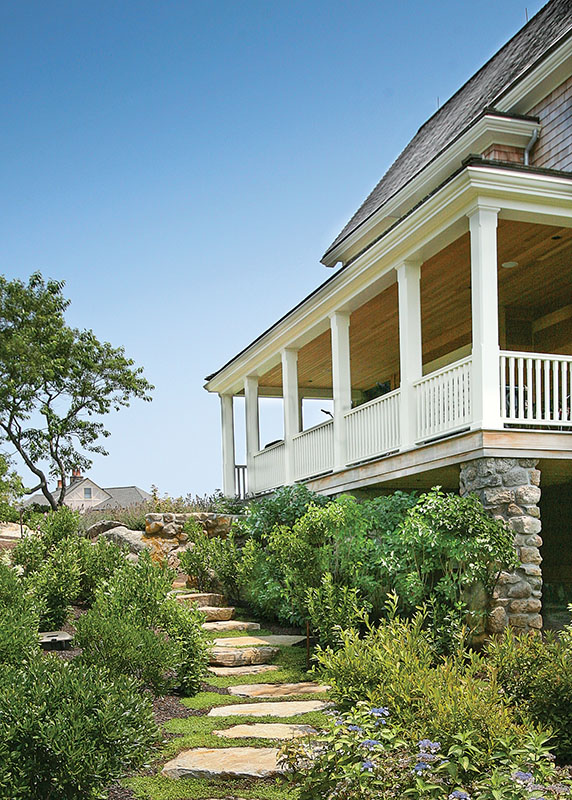 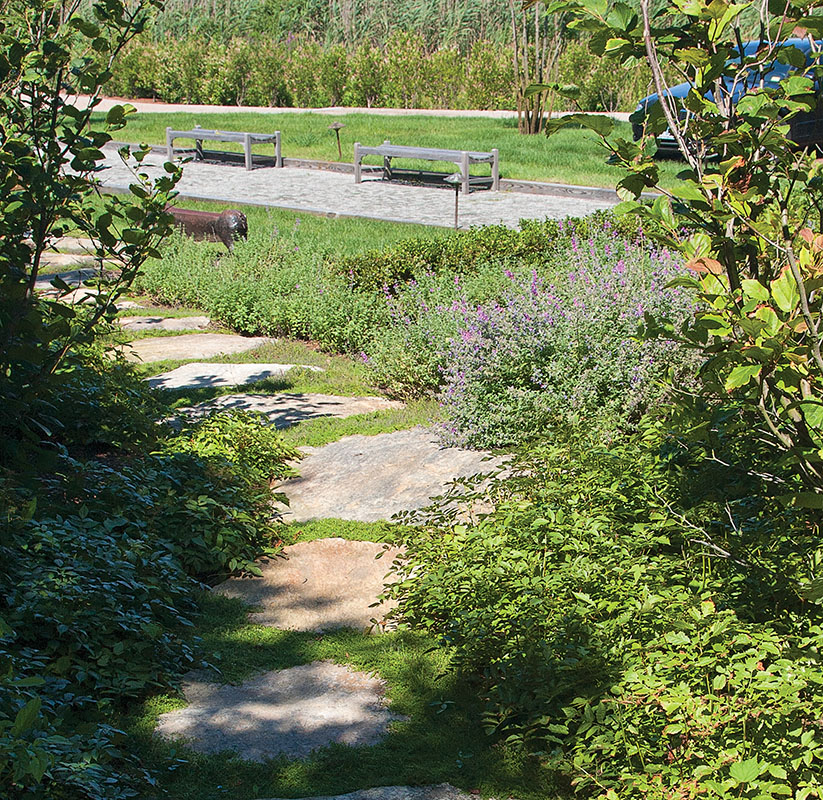 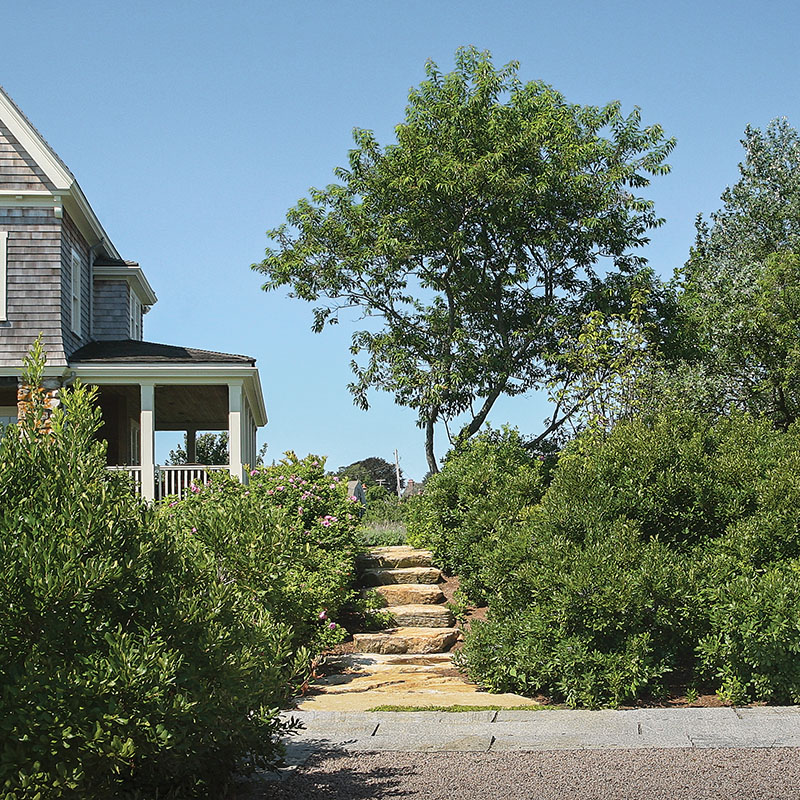 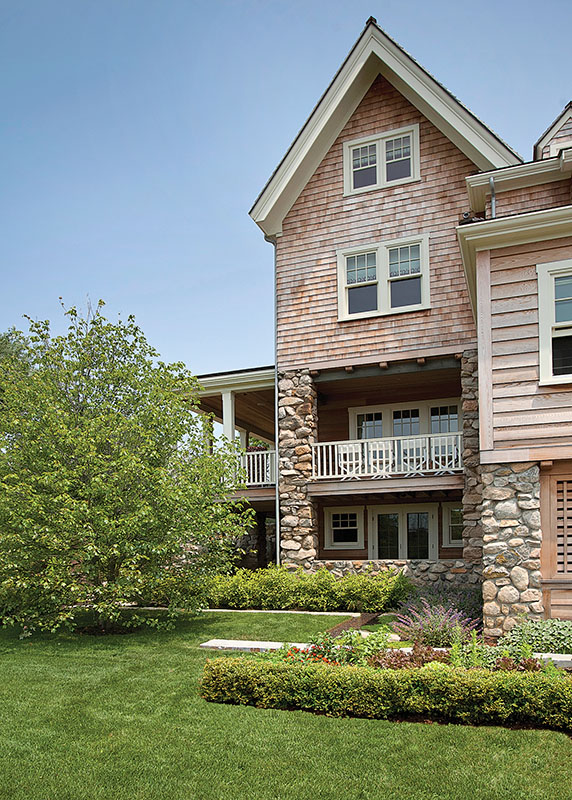 Formal Entry
Upon arrival, guests ascend a more formal entry that respects the formality of the house in terms of symmetry. “We had two approaches: One is a more formal, a straight-on shot up the front steps to the house. The other is a more leisurely, stacked-stone approach that goes through plantings and approaches on the side of the new front porch.”

One of the project’s major challenges was getting a septic system in place. The wetland setback includes half of the back yard, making siting it there an impossibility. “Part of that adaptation of the front was to install a garden in front of the hedge we were keeping.” Thereby disguising the septic system’s “impertinences.”

Unique to the property is a rear drive, in addition to the front driveway, which enables the clients to tuck their cars to the back to accommodate guest parking. They also relocated the original drive and parking area to the edge of the lot—where they would not break the sight lines to the ocean—and screened them with native plants. “Parking is at a premium here,” notes LeBlanc. “Having a dual driveway in the front and the back meant that we didn’t need to take up the whole front yard with [a driveway].”

To be sure, no space was wasted. Because the lot is “so house-centric,” they decided to make use of a side slope as a separate sitting area—one not associated with the porch or the house. The “hillside,” being higher than the front porch, lent itself to becoming “a cleared area in the grove,” and offers a different perspective of the ocean. “Prior to us working on the site, it was just a grove of weeds and heavy undergrowth.”

What strikes LeBlanc about the project is “this respect for the old house.” The beach is not a formal location, yet the house leans that way. The informality of its locale, in combination with a relaxed planting design and the wrap-around porch makes the property comfortable and inviting, as a beach house should be. “I think that is the major difference between what was there before and what is there now.”