In December 2009, on an unusual property in Cleveland, Ohio, landscape architect Virginia Burt found herself contemplating Japanese garden design principles. Her clients stood facing a deteriorating house 12′ from their own. Both wood-framed houses were built in 1897 and, a century later, were considered “grand dames.” But only one was to survive the test of time. The other’s destiny—inexorably linked to that of its neighbor—lay with its dismantling.

“It was taken apart stick by stick,” explains Burt, who oversaw the salvaging of stone foundations, woodwork, windows, sandstone pavers, and trees from the adjacent property. Those materials were to become the building blocks for a sunken garden, an arbor, and twin sheds. The excavation unveiled several surprises, including a balloon frame comprised of 30′-tall pine timbers. “It was astonishing to see some of the things that came out of there,” says Burt. Salvaged studs were used in the building of the arbor and matching sheds—which include original spiderweb windows from the old house—as well as in new framing for the existing porch roof. Of those windows, Burt says, “We are purposing things that suddenly make sense in a manner that really [adds] richness to the design.” 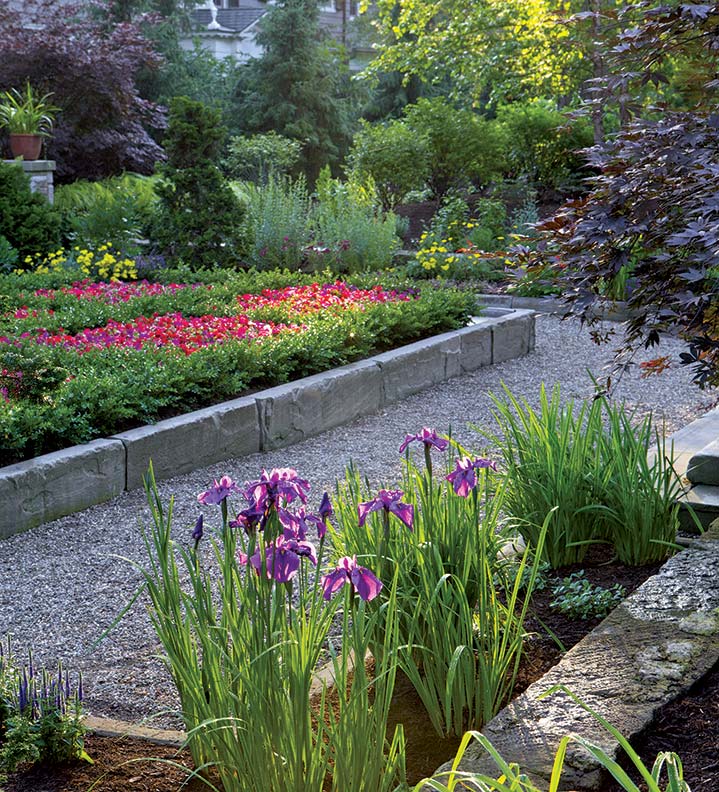 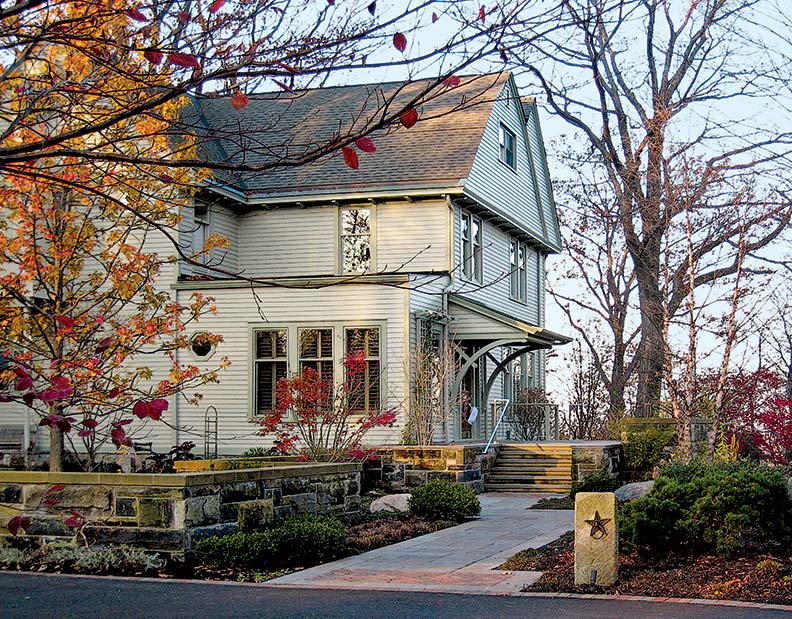 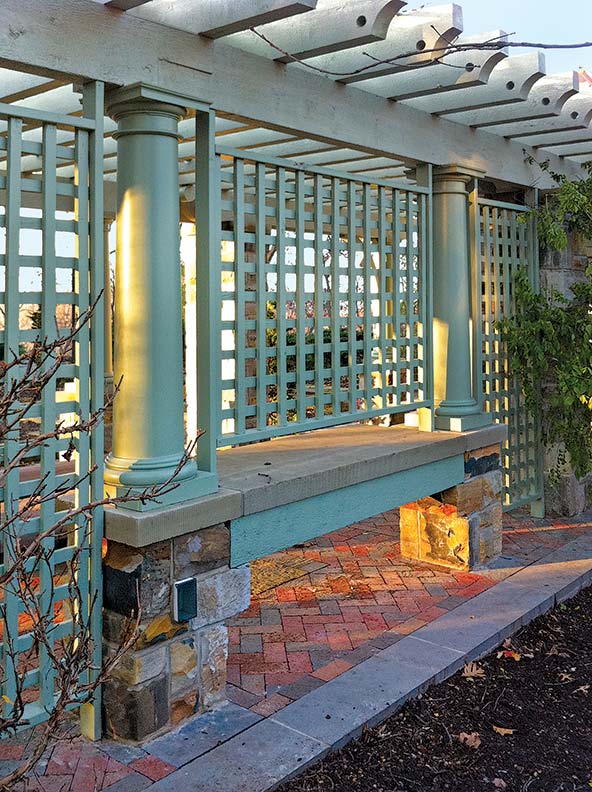 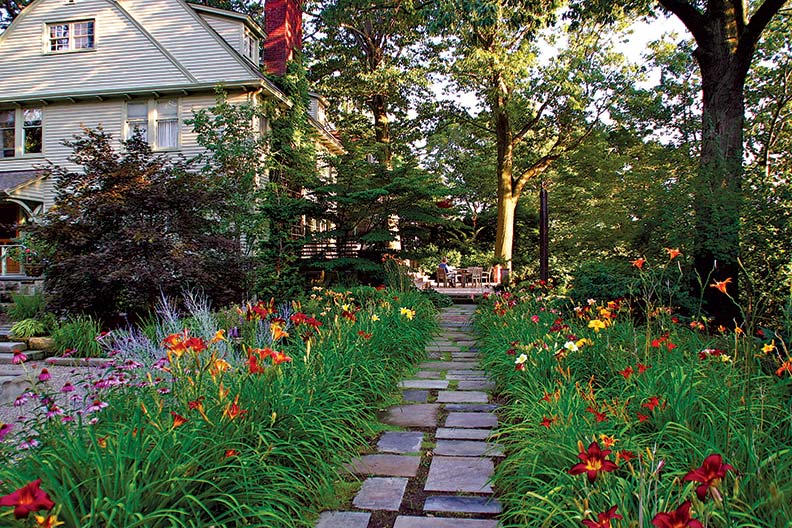 Inspired by an article in the New York Times pointing to the advantages of deconstruction over demolition of old buildings, Burt and her team repurposed foundation stone and timbers for the exterior garden’s construction, and used the rest for steps and railings. “The clients are very much about an environmental response to sustainability and reconstruction, rather than demolition,” notes Burt. “It is ideal to have clients who are willing to do that. To salvage, reuse, and recycle breathes new life into the property and the surrounding community, which is then inspired to do the same.” Subsequently, what would have been 200 truckloads of waste for disposal were reduced to 10. “For me, what makes this so current is that, even though we are working in the traditional character, we’re using sustainable and salvaged [materials], which are so important today,” says Burt.

Of course, the project was not without its challenges—spatial balance being chief among them. “A large leftover space was created, making the consolidated property seem unbalanced,” explains Burt. The solution came in the form of the new arbor and sheds—structures strong in form and strategically located for visual cohesion. Circulation, too, was a problem, as the main entry door is actually on the side of the house; prior to the garden renovation, visitors would often confuse the front and side doors. Burt’s response was to remove a cedar hedge and old porch, reveal the circular drive, and add a new entry walk to create clear cues.

Additionally, the client wished to keep the roof over the front door; a raised platform, adjacent to the door, was therefore designed in proportion to the building. Furthermore, stone coping was needed for the courtyard and porch walls in order to match the original 4″-thick stone coping on the porch columns. A sample revealed machine cuts were too regular; the vertical faces were then blasted with cocoa husks to “age” them. Using stone hammers and rough sandstone pieces, the coping was further roughened up, sanded, and chipped. In this way, new materials were made old and seamlessly sewn into the environment.

Today, her clients’ landscape is characterized by original foundation stones that serve as freestanding garden walls; an old sidewalk reconfigured for a stepping stone path and arbor floor and salvaged-wood supportive brackets for the porch roof. Additionally, an original sink from the house was custom built into a potting bench, which the client uses when planting his collection of nearly 300 Italian pots. “Literally, [the sink] fits him,” says Burt. Viable trees—including a 27′-tall spruce—and specimen plants were also dug and transplanted to foster the feeling of a mature garden.

Of special note is the Japanese-inspired “wabi sabi” garden, featuring shade perennials and a water element created from a horse trough. “The clients really value incorporating salvaged materials and the wabi sabi philosophy,” notes Burt. A Japanese term, sabi is defined as “the patina or aura that honest materials acquire with age if well cared for,” while wabi “is the aesthetic that appreciates things that have or express sabi.” To have clients who appreciate such a term as wabi sabi was one of the most gratifying aspects of this project for Burt. “It’s not easy to describe and even more difficult to implement.”

The garden is now four years old. Of the clients and their garden, Burt says, “They entertain in it, they work in it, they hold meetings in it, they live in it—it has become a series of outdoor rooms they use differently.” When visitors arrive at the garden, the overwhelming sense they seem to have is that it has always been there. This reaction has much to do with the incorporation of old materials from the sister property.

Of its design, Burt says, “I think there’s a richness that shows, a depth.” She also describes it in terms of hard and soft elements. For Burt, a garden’s structural framework combines with the greenscape and various materials—particularly those that have been reused—to form a meaningful space. “It’s giving things the kind of patina that gives the garden an opportunity to create an experience for people.”

According to Burt, the Palladio Award-winning garden answers the 21st-century call to reuse, salvage, and sustain. She views salvaged materials as the means by which to create spaces that reflect and respect history. “If it looks like it has always been there, then I have been successful at creating a sense of wabi sabi,” she says. “There’s an old relaxed beauty to it, which fits the house and the people.”