The air is crisp and the temperature bracing as Joe Valentine and Paula Hunter, on snowshoes, hit the crest of their hill and come upon a favorite scene spread below: the dormant perennial garden. “Vivid against the snow, the buildings and garden rooms welcome us back to civilization,” says Joe. “We can see the defining hedges; it looks like a quaint winter village.” Such interludes were orchestrated in the couple’s design.

Valentine planned for the glories of summer and dining al fresco. He pondered what pattern paths might take to make farm chores convenient. He balanced colors and juggled textures. Joe also imagined the garden in winter: In New Hampshire’s Monadnock region, the dormant season is a big chunk of the year, and Paula and Joe spend it outdoors. Evergreen hedges, fences, eloquent accents and focal points all have year-round interest.

The snug 1789 Israel Balch house and its barn were in an unadulterated state when Joe and Paula bought Juniper Hill Farm’s remaining 30 acres of farm and woodland in 2000. The property had no garden at that time; rather, it had lackluster farm fields and the rickety remains of an agrarian past. Joe and Paula see livestock as part of the land’s story, so they preserved that heritage with sheep pastures and goat paddocks. But they are also dedicated gardeners fascinated with horticulture. Thus, ornamental gardens were destined to be part of the picture.

They started with a courtyard garden hugging their primary entrance near the kitchen. Joe installed a deciduous ‘Tinkerbelle’ lilac hedge and clipped it into a wall. At that point, spring blossoms were the goal. Then Joe addressed each of the exterior doors to create gardens that spill from the house. In keeping with the mood, he used water troughs, farm wagons, wattle edging, and other historical bits—elements particularly notable during the garden’s slumber.

An existing rectangular pool was oddly placed: although it was in plain view of the house, it wasn’t parallel to any building. In fact, it was uncomfortably askew. When the couple installed a vegetable garden, the lack of linearity became pronounced. Their friend the garden designer Gordon Hayward suggested that an evergreen hedge would block the lack of geometry. Joe selected a hedge of arborvitae, Thuja occidentalis ‘Smaragd’, letting it stand as a series of tall spiked spires rather than clipping it into a flat-topped presentation.

Now the garden further developed into a series of segmented rooms, each with clipped hedges or fences to define and partition space. A few are deciduous privet, but most are evergreen and give the garden its charming mini-village ambience in winter. Joe has a unique ability to visualize. “[The garden] was never a plan on paper,” he explains; “it evolved slowly.” Those wall-like hedges block winter wind gusts over the fields, a buffer for the house.

Being fond of boxwood, Joe installed strategically placed boxwoods clipped into rounded “dollops.” Scattered throughout are over 150 boxwoods in eleven different varieties. “I continue to test the limits of hardiness in new varieties as they appear,” Joe says. He added tall, linear Thuja occidentalis ‘Degroot’s Spire’ arborvitaes as exclamation points. “They give height and verticality.” He clipped yews into triangular accents to appear as “bookends” on wooden fencing.

Joe collects granite standing stones—not hard to come by here in the Granite State. Their textural interplay with the evergreens makes the garden lively all year. Painted in colors that pop in winter, gates announce points of transition. Joe adds low wattle fencing and grapevine orbs (found at a local craft shop) as accents. A clothesline is disguised as a simple pergola made up of boards that straddle two posts, with saplings draped over the ropes. 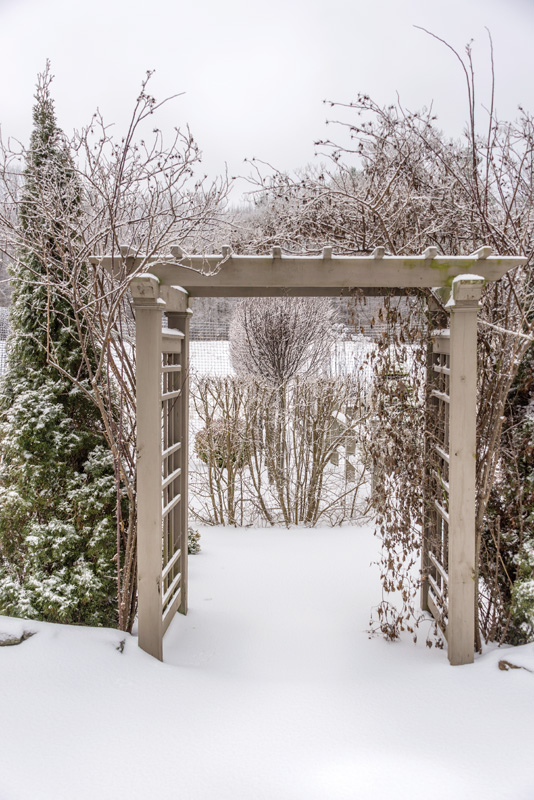 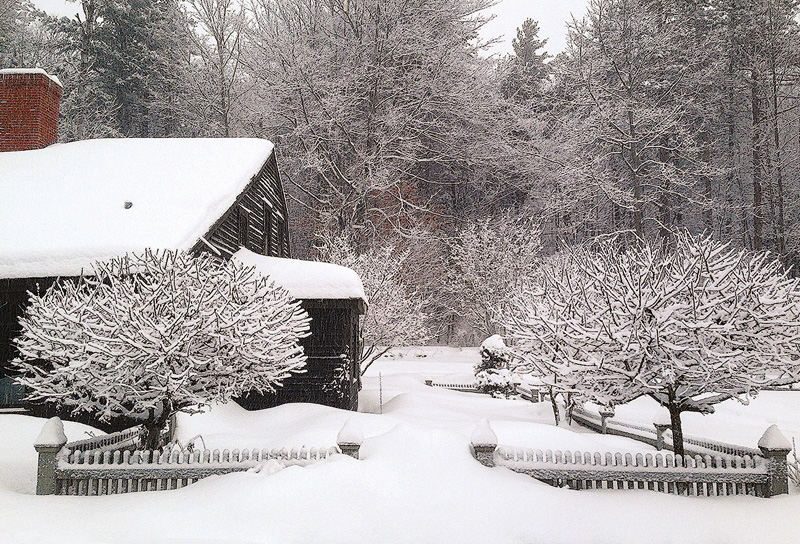 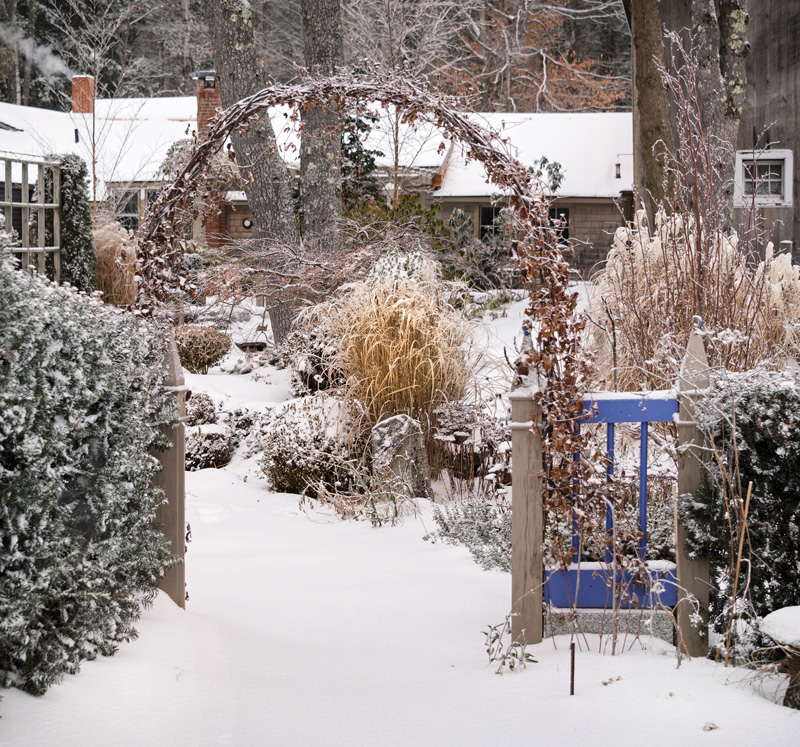 Joe and Paula leave ornamental grasses uncut, letting the plumes stand until heavy snows snap them. Perennials with winter interest are left intact. Small trees such as the crabapples are pruned so their branch structure and bark texture is evident. The gardens extend over approximately two acres. “They might be best described as ‘country formal’,” Joe says. “But I’ve always included design elements that please me, regardless of whether they are a certain style, as long can be interpreted to fit the place.” 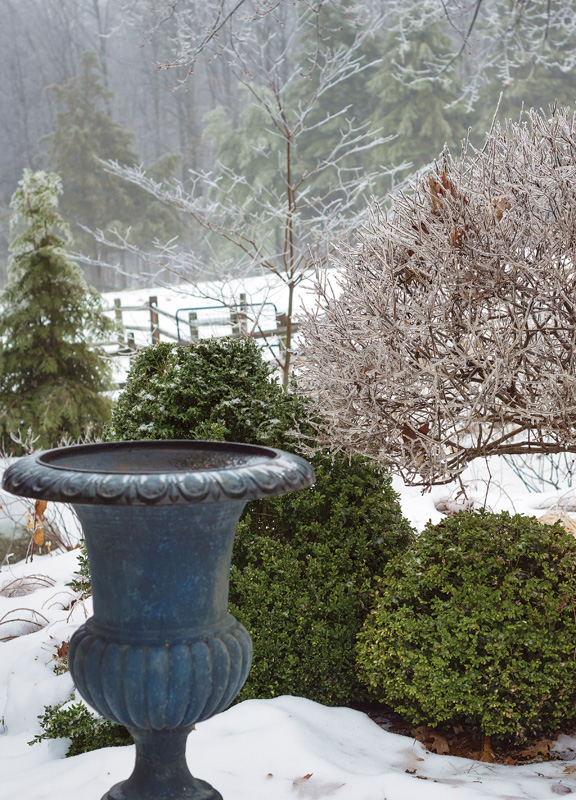 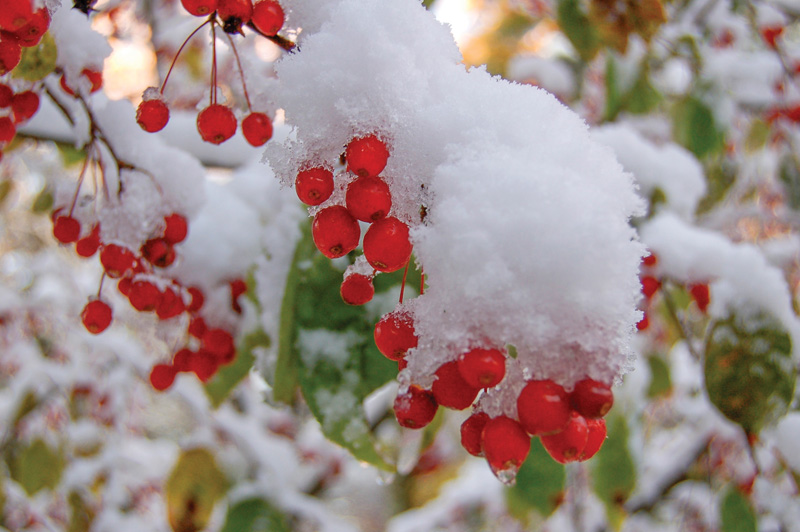 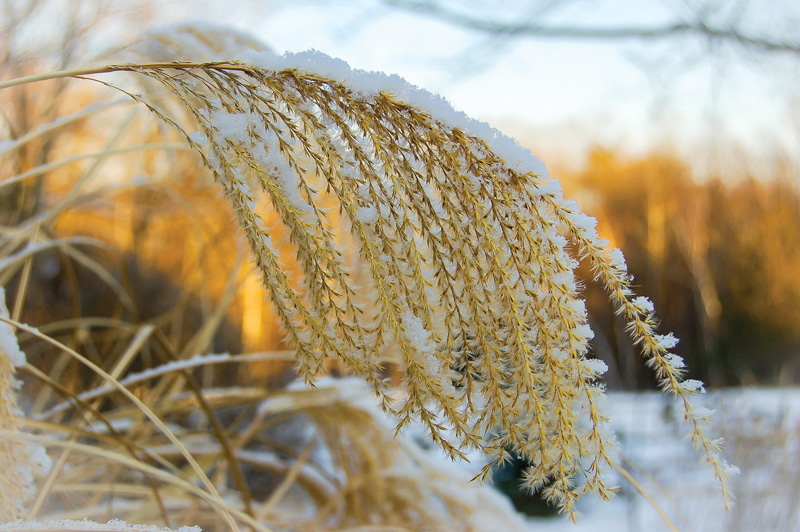 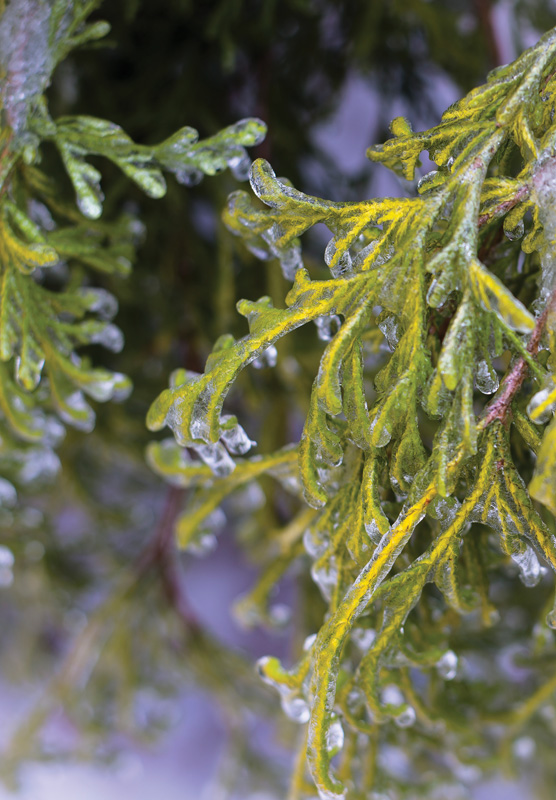