This story is about the rescue of an antique Connecticut farmhouse, which got a sympathetic renovation after a fire. Parts of it were severely damaged from smoke and water. Then, inspections turned up structural problems and areas that needed to be brought up to code. Happily, the main house was mostly intact. A small bath had been added many years ago, upstairs at the end of a hall, and a kitchen put into the old, one-storey ell.

“I saw a house with plenty of history to preserve,” says interior designer Sarah Blank, “yet it needed to be made functional for the 21st century.” Sarah’s clients, the Ross family, had an emotional tie to the old house and agreed to a preservation approach. “We decided to add a second floor above the ell, for a master suite to include a needed second bathroom. Although the original chestnut framing and wall boards were found insufficient by the building inspector, the wood from this area of the house was salvaged and used for decorative purposes in the rebuild.”

Sarah Blank, a Connecticut native who continues to study classical architecture, has been involved in the restoration of houses dating back to the mid 1700s. “I’ve spent a lot of time with

“When I got here, I realized that this house is a jewel, with its classic simplicity untouched.” The main block is the “big house,” with a “little house” connector to a “back house” later addition. Blank insisted that the ell and back house remain secondary to the main house in size, finishes, and importance, but the original proportions carry throughout the whole.

Using the old glass, the original windows were salvaged and restored, and new windows upstairs match exactly: They are single-glazed, multi-light wood windows with lead counterweights. “We had heat-loss calculations done,” Blank explains, “and due to the thickness of exterior walls and adequate insulation, the single-glazed ‘new old’ windows meet code. The house is quite warm and cozy.”

Many interior details were restored or re-created, and many furnishings and artwork conserved. “I have to say, Chubb Group was amazing,” Sarah Blank says about the insurance carrier, who offers a historic-house policy. “The company understood the family’s love of this house and its history. They were present through the entire project.

“We were able to save the original chestnut framing, which was reincorporated in the reconstruction and design,” Blank says. The restoration, including the upstairs addition and kitchen and bath remodeling, was completed in record time in 2011. “Brian Ross, the homeowner, loves this old farmhouse,” his designer says. “He wanted to preserve its architectural heritage. All new walls are real, hand-troweled, three-coat plaster on wire lath. The finish is beautiful . . . there’s no drywall anywhere. In the kitchen, new plaster walls were left unpainted.

“I am a realistic designer,” Blank says. “We are all getting older, not younger! Brian’s office on the ground floor can become the master bedroom, if necessary, in the future.” Next to it she specified an accessible bathroom with a three-foot doorway and curbless shower—the shower floor is recessed into the basement.

Decorating and furnishing was a collaborative effort between the designer and Ross. “This is a country house,” Sarah Blank explains. “In general, we returned the house to what it had been before the fire. Plain plaster walls, plain window treatments. We added bathrooms, of course, but they are naïve in their design: wood floors, very simple vanity cabinets, a built-in bathtub. Everything simple.”

Furnishings include a mix of antiques and comfortable leather and upholstered pieces. A lot of the furniture already in the house was salvageable, after being professionally cleaned and reupholstered as necessary. Artwork, too, was restored.

“The house did not have a name, as far as we knew,” says Blank. “I asked the Rosses to pick one: It’s Colinwood, in honor of their son. In so many ways, this project was a labor of love.”

The kitchen in the ell had to be dismantled and rebuilt, in order to support the second floor, which contains the new master bedroom and bath. All the old timbers were reused in the reconstruction.

Befitting the farmhouse, the kitchen design is frank, simple, and functional. Simple cabinets have a Shaker feeling. The refrigerator is masked behind cabinet fronts. A modest island holds a prep sink and beverage cooler.

Some elements survived the fire to be cleaned and restored or reclaimed: windows, a mantelpiece (above), the back stair. The chestnut frame was largely intact and reused or repurposed. After reconstruction according to modern building codes, the interior is virtually new, but woodwork and trim were patterned after what was here before. 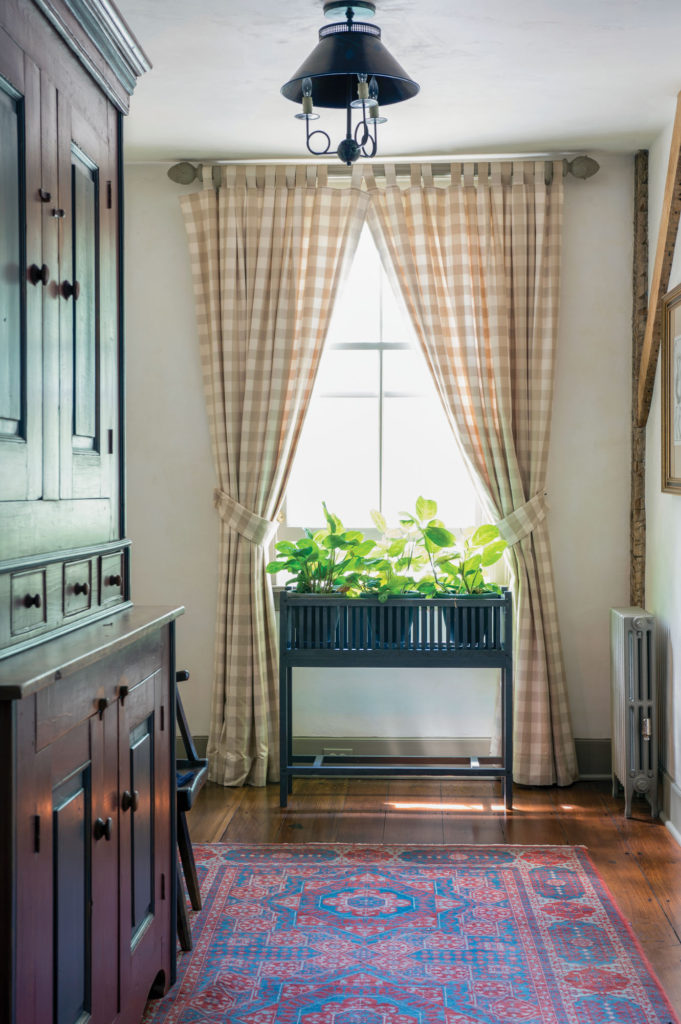 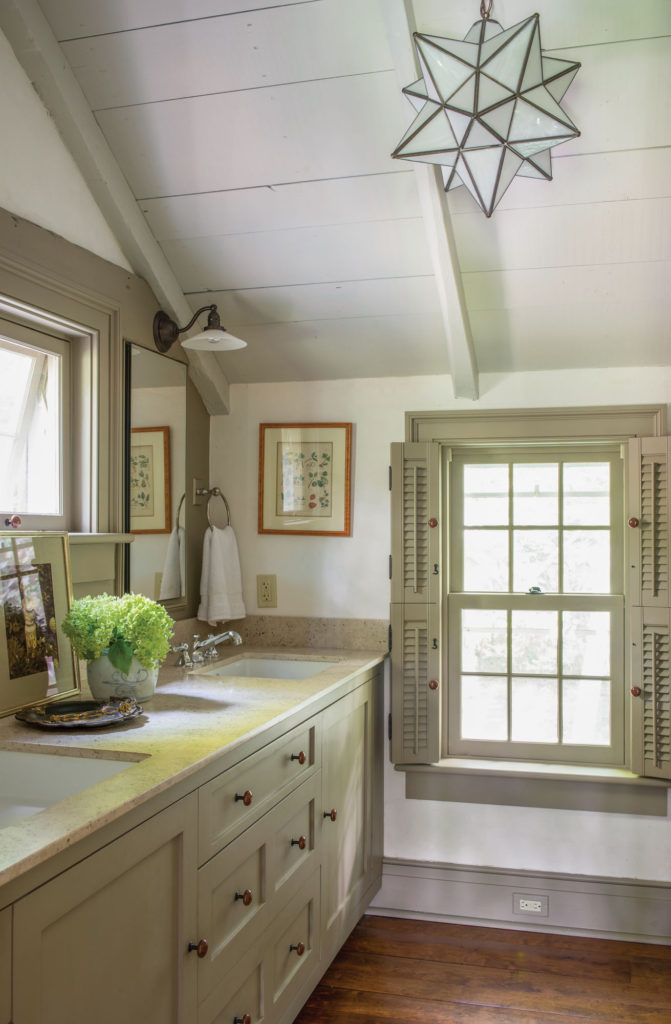 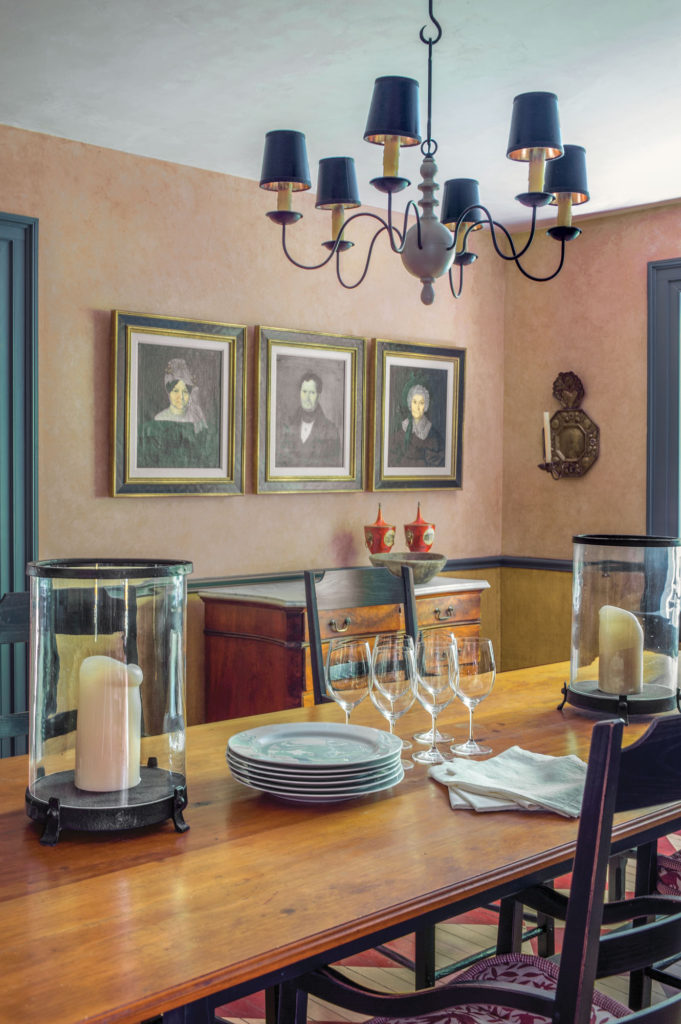 A New Georgian Revival in the Suburbs