When they saw the Victorian house for the first time, Karen and Michael Lennon thought it anything but charming. Built in 1890 as a men’s boardinghouse for shipbuilders, it had a dreary interior and a warren of tiny bedrooms upstairs. White plastic shutters stood out against the mint-green exterior paint. Systems were outmoded, the roof needed replacing, and the septic system was inadequate.

But Karen had spent her childhood summers here in the pleasant beach town of Madison, Connecticut, where her dad still lives and where all of her siblings have summer homes. She grew up playing on the beach and wanted her children and grandchildren to have those same fond memories. Her requirements were simple: The house had to fit their lifestyle, which meant easy and casual. “When we get up in the morning, we put on our bathing suits, and we don’t take them off until dinner.” Karen didn’t want to worry about rugs and upholstery. Most of all, she yearned for a porch big enough for summertime gatherings of the whole family.

Situated just four houses away from the water, the old boardinghouse was close to the beach, so guests could come and go as they pleased. Seven bedrooms offered enough room for visits by the Lennons’ seven children and two grandchildren. And the front porch was big and wide. Although the house needed attention, it had big windows to let in the ocean breeze, and some original materials and details remained. 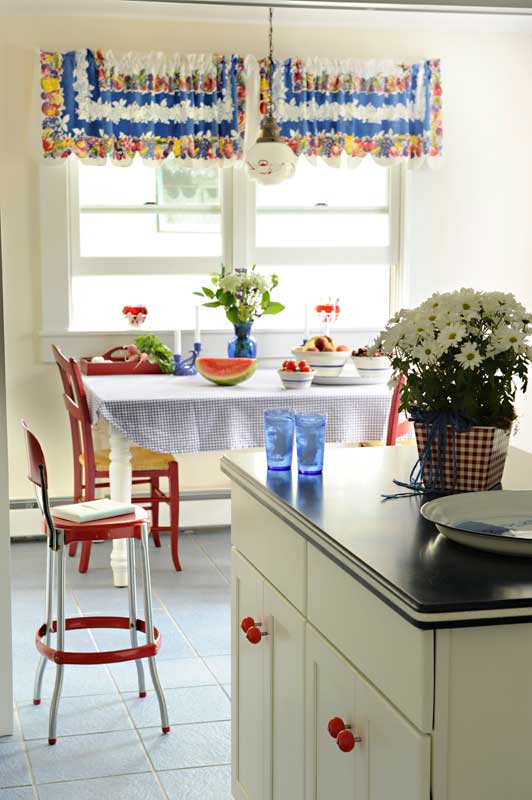 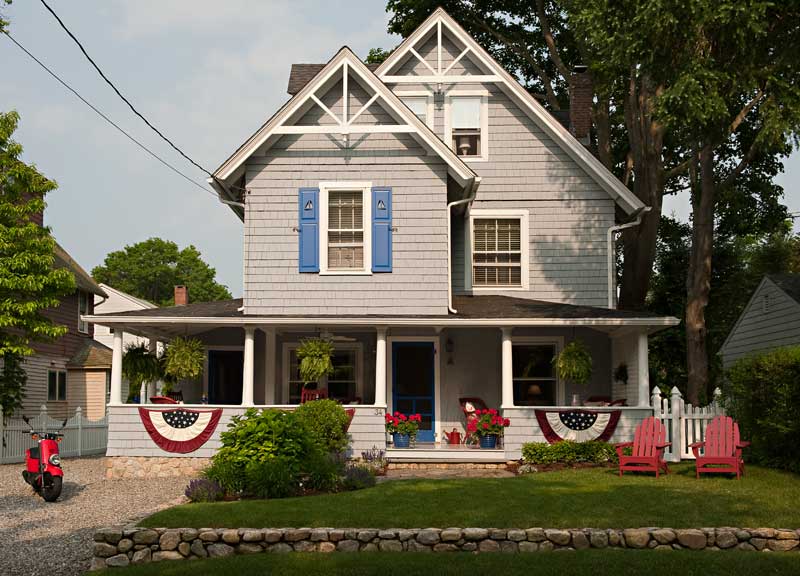 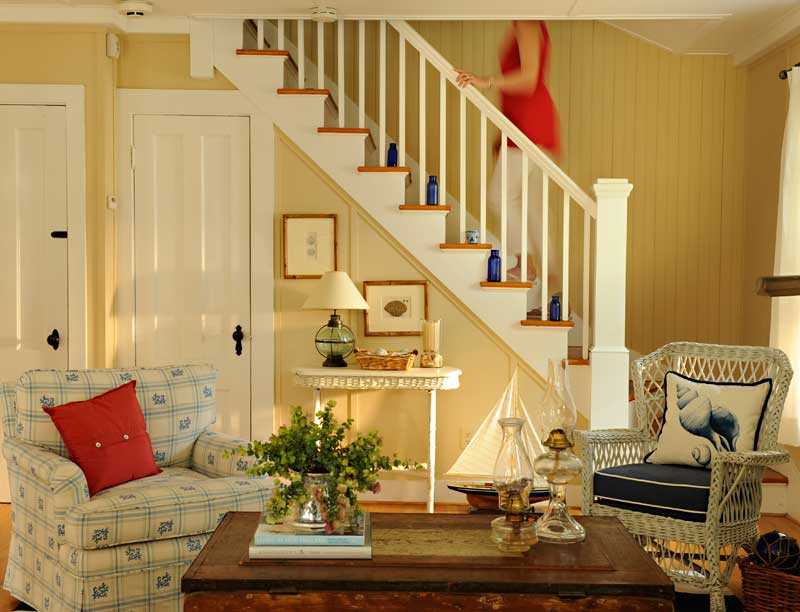 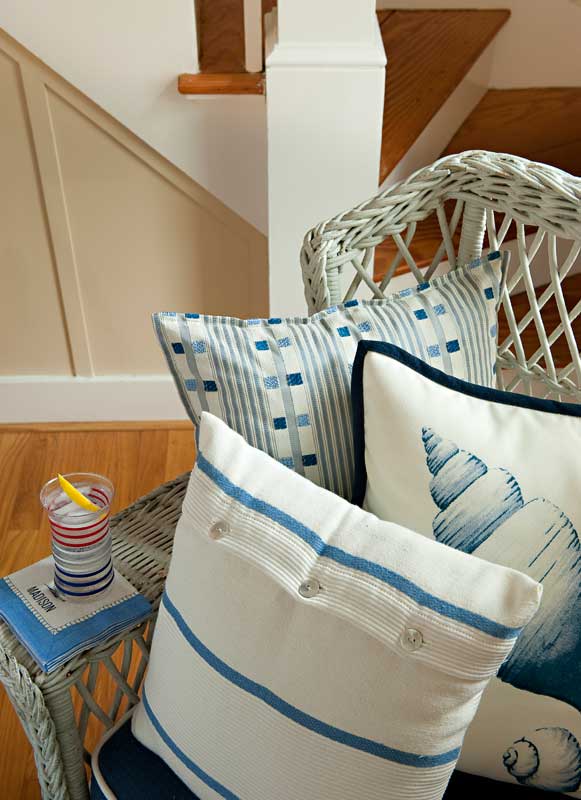 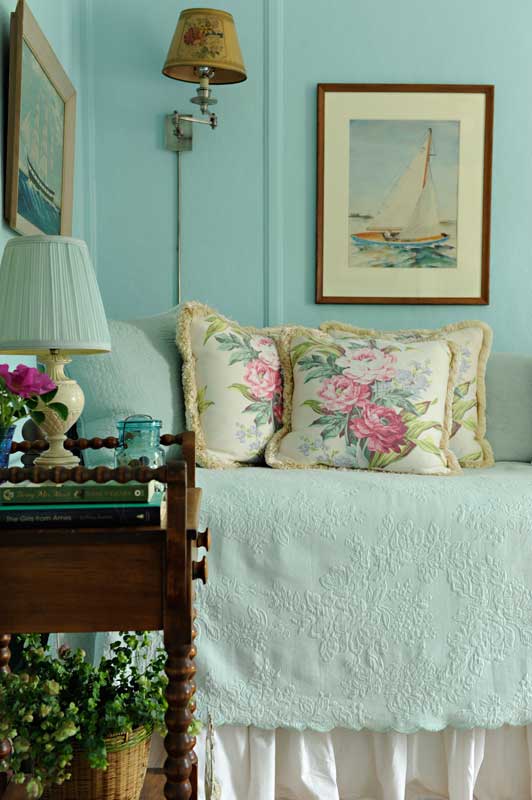 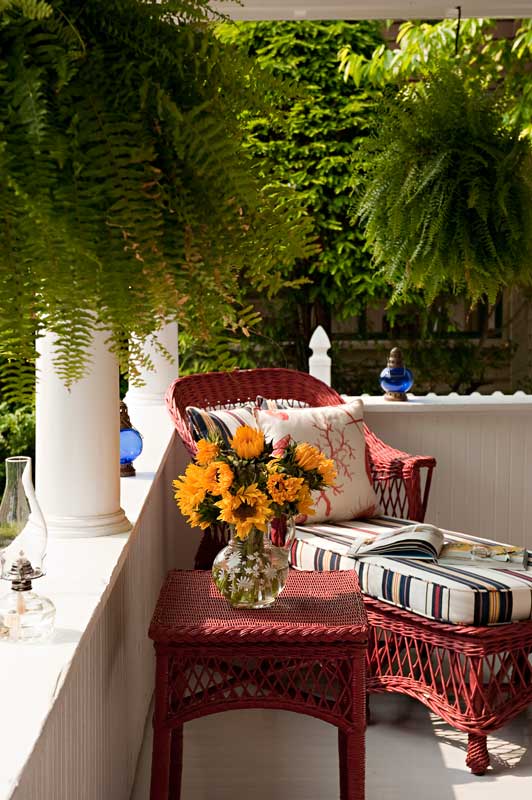 The basics came first: new septic system, new roof, and new porch floor. A stone facing on the concrete foundation improved the house, as did a low stone wall added at the perimeter of the property to match others in the neighborhood. They repositioned a backyard tool shed and added flowerboxes and a cupola to make it a focal point. Karen called in the talented interior designer Iliana Moore; together they chose a casual color palette that said “beach,” New England style. It’s predominantly blue, white, and sand, with accents of red. The outside of the house was repainted in a simple polychrome scheme featuring blue and gray; cottage shutters with sailboat cut-outs add to the appeal.

The dining room retains its old beaverboard, which was an early 20th-century wood-fiber wall material. It was freshened with Benjamin Moore’s ‘Rich Cream’ paint. Furniture is light and casual. No-fuss wicker chairs accompany a white-oak dining table and a 19th-century pine sideboard. Hung over the sideboard, a collection of 19th-century blue-and-white plates adds color.

The living room is nautical, with ship models and shells. White wicker and overstuffed seating lends comfort. Blue and white toss pillows were made from vintage linens and fabrics that have sea themes.

On the top floor, four tiny bedrooms, separated only by single-ply walls of beadboard, were reconfigured into three comfortable rooms for grandchildren and guests, and a bathroom was added under the eaves. Second-floor bedrooms were freshened with color, including Benjamin Moore’s crystal-clear ‘Sky Blue,’ pale-blue ‘Harbor Fog,’ and a yellow-white color called ‘Cotton Tail.’ Lighthearted and playful antiques furnish the rooms.

The town of Madison comes alive on the Fourth of July, with parades and parties, fireworks, and bonfires on the beach. (For events and festivals, see madisonct.com.) Karen Lennon wanted her porch to reflect that all-American spirit. Bunting hangs over the railing from Memorial Day to Labor Day. Iliana Moore kept to the theme, choosing old-fashioned Bar Harbor wicker and painting it patriotic red. Now the family spends a lot of their summer on the porch, sipping lemonade in the cool ocean breeze or hosting nighttime parties. The boardinghouse has made its comeback as a beach cottage.