Set back from the street, as though retreating behind tiers of lace, the Bennet–Farrell house is astounding, an antebellum anomaly amid the clutter of 1930s-era apartment houses. Here in Bay Ridge, the neighborhood best known as the setting for the film Saturday Night Fever, the 1847 house once stood as the crowning triumph of a 200-acre estate on nearby Shore Drive, where it enjoyed a commanding view of the Verrazano Narrows and the approach to New York Harbor.

It was the kind of house where a reigning member of the merchant class would take a position on the broad front porch and literally watch his or her wealth sail into port, says Anita Bartholin Brandt, AIA, the architect who worked on the house’s restoration. “This really captures that well-to-do era of successful merchants who lived high up on the hill,” she says. 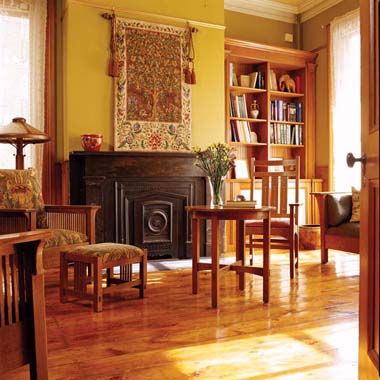 The house had already been moved once (in 1913) because of land use pressures. Like so many landmark New York houses without protected status, it was threatened by demolition, most recently in the late 1990s. In that instance, a compromise was struck: the owner–developer received permission to build condominiums on part of the lot, while the house was landmarked on the remainder. Maryanne Ruggiero, a radiologist and Brooklyn native, saw the property soon after it went on the market. “I bought the house from the contractor who was [initially] going to knock it down,” says Maryanne, who has three children and acquired the place with her former husband. “It was basically a disaster on the inside. I saw the potential when I walked in.”

The house was structurally sound, though, and after closing the deal, the couple hired an architect and restoration contractor to guide its restoration, with help from a $200,000 loan from the New York Landmarks Conservancy Historic Properties Fund. (In 2005, the project won the Conservancy’s prestigious Lucy G. Moses Award.)

The exterior got a full makeover, including new roof, skylight, and drainage systems, and the restoration of the front and rear porches. “The house found the right client,” says Brandt, the architect. “She was willing to put her money where it mattered, and did it right.”

The skin of the house was in remarkably good condition, thanks to its original coat of lead paint (lead is an excellent preserver, Brandt notes). In spite of that, much of the house was suffering from serious dry rot, requiring extensive wood restoration with consolidants and epoxies (often proprietary brands made by Abatron).

Remarkably, the windows were also in excellent shape, with old glass and thin, graceful muntins. “They’re beautiful, they’re original, and they’re very delicate,” Brandt says. To make them weather tight, each window was carefully removed, and weatherstripping was cut into it, a technique that immediately improved Ruggiero’s heating bill.

Inside, Ruggiero has brought an eclectic, Mediterranean sensibility to the house, which is still sparsely furnished in places. In the library, the original, plantation-style windows, draped in lace panels, reach from the floor to near the ceiling. Maryanne’s Italian uncle, Angelo R. Arborea, built the bookcases, using Greek Revival profiles that appear elsewhere in the house. Ruggiero is still mulling paint and wallpaper choices and in some cases furnishings for this and other rooms.

If the interior is still a work in progress, the same can’t be said of the outdoors, where a succession of bowery spaces have exploded under the influence of Maryanne’s green thumb. There are apple, pear, and cherry trees; dogwoods, a Peegee hydrangea, golden chain tree, smokebush, and a lavender bed. Maryanne laid the narrow brick walk that runs along one side of the house herself: a series of bricks laid to create squares within squares. “I wanted to create a pattern where I didn’t have to cut the bricks,” she says. Instead of grass, the small front yard is perpetually green and low to the ground, thanks to a ground cover of Reiter (or weeping) thyme.

A historic photograph of the house revealed that it had once had decorative parapets over the front porch and along the roof line. Both were enriched with acanthus and scroll rnament—authentic Greek Revival touches that are often lost to time on homes of the period, Brant notes.

Despite a tight budget, the owners opted to re-create the parapets complete with applied ornament. Rather than use wood, Brandt found the detail she was looking for in stamped metal, from pressed metal ceiling specialist W.F. Norman. “That’s how we got the detail without the cost,” she says.

As a final touch, Brandt also designed replacements for the missing staircase that leads up to the porch and the cast-iron fence and gate. “When we finished,” she says, “it really looked like a Martha Stewart wedding cake.”