When a couple purchased an old coastal farmstead overlooking a meandering river that feeds into Buzzard’s Bay on the south coast of Massachusetts, they fell in love with the stone walls, rolling lawns, and rustic nineteenth-century outbuildings that sat quietly on the property. The main house was less desirable. The poorly constructed 1960s “motel”-style home was an eyesore, to say the least. Having seen the work of Albert, Righter, & Tittman Architects in Boston, the couple called on the firm to design a house in keeping with the vernacular of the outbuildings while creating a true getaway home the couple could enjoy for years to come. Well-versed in the language of coastal New England homes of the past, principal Jacob Albert and the project’s lead architect turned to the rambling summer cottages of turn-of-the-century New England for inspiration. 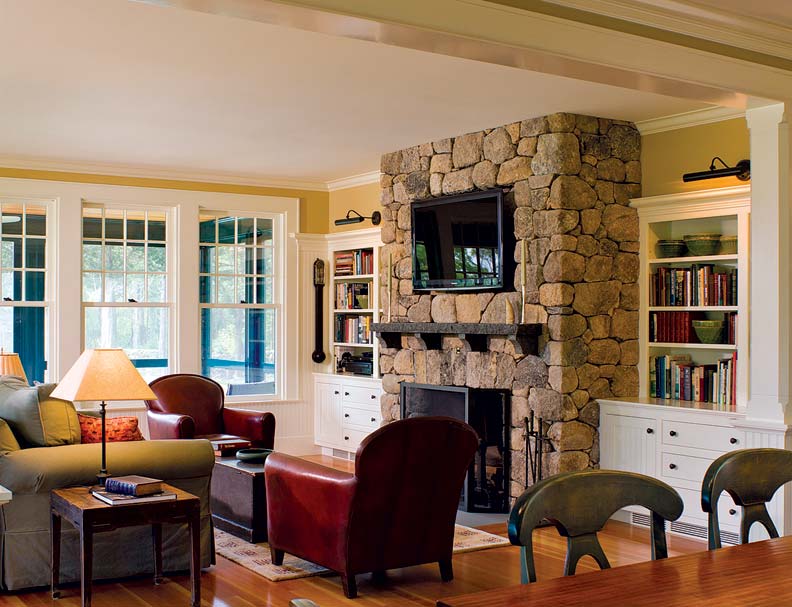 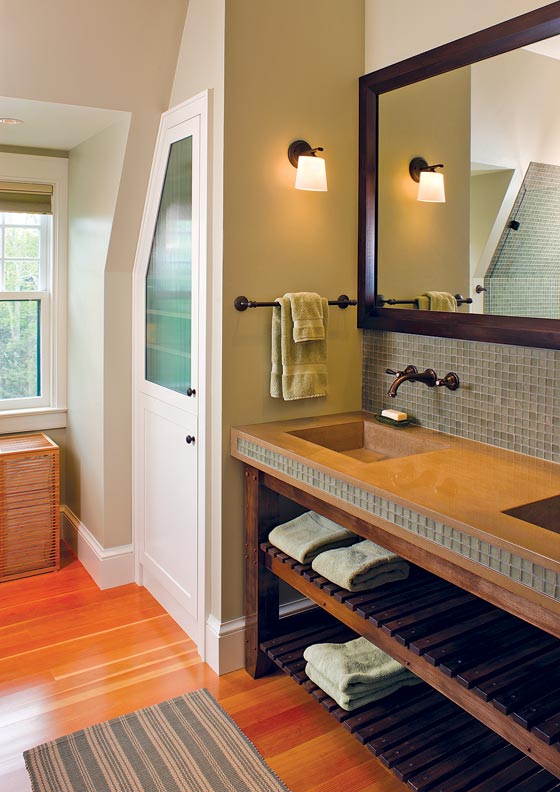 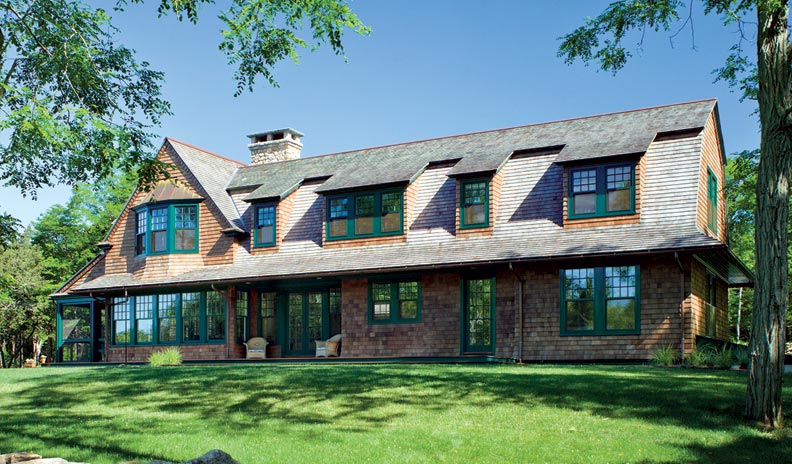 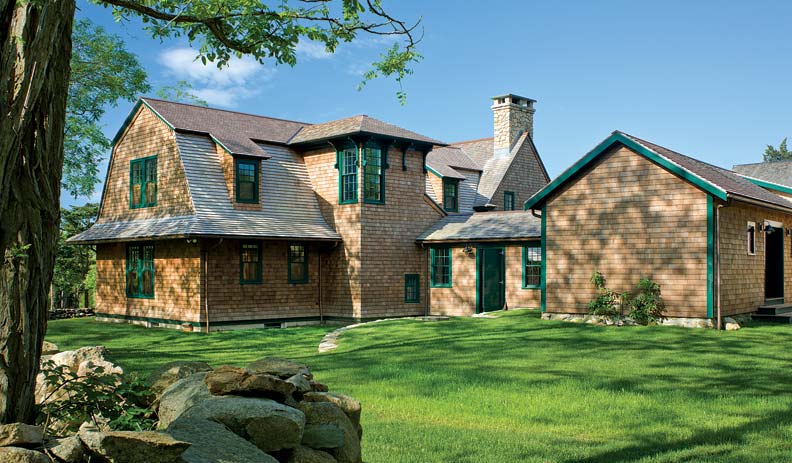 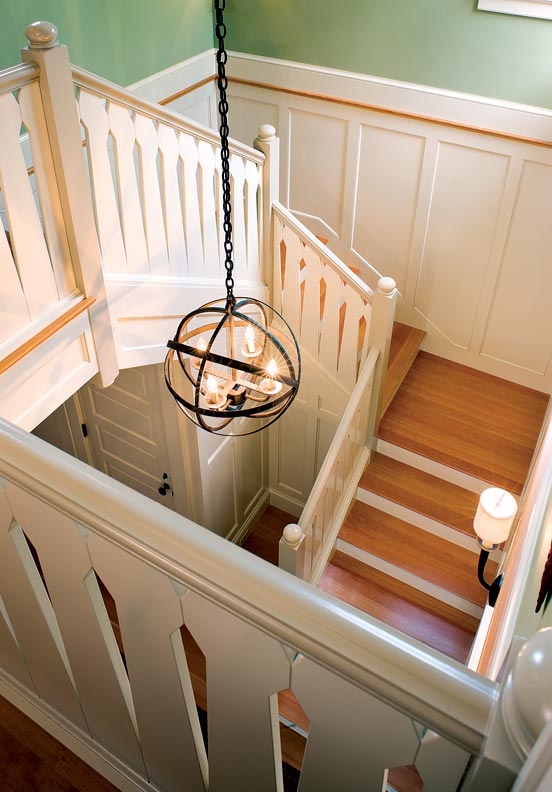 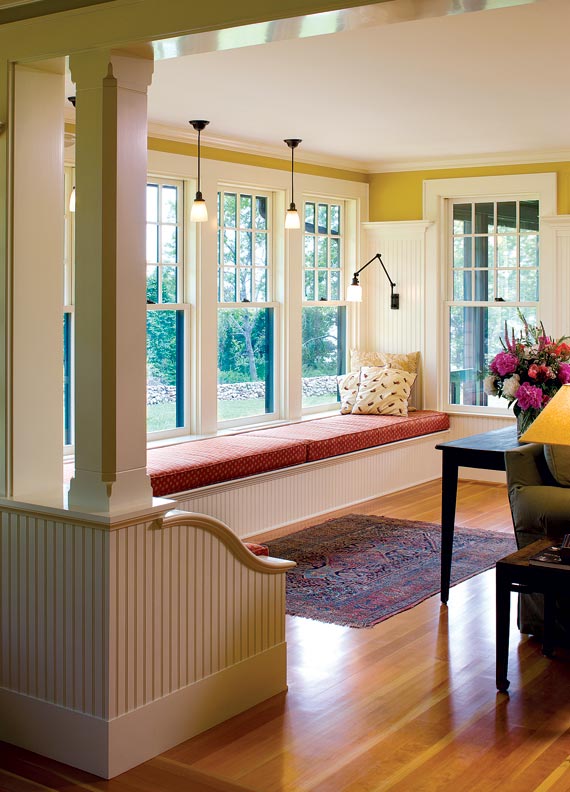 “The original house was structurally unsound,” says Albert. “We had to start from scratch.” Working within the footprint of the existing house, Albert took design cues from cedar-shingled outbuildings on the property for the new house. “We wanted to make the building appear as if it had organically grown over time without jarring contrasts between the new and old buildings,” says Albert. “The old sheds on the property were picturesquely disheveled, and we wanted to incorporate them into a new house—connecting them as a whole.”

The more charming sheds would set the language and tone of the composition. One shed acts as a sort of gate lodge to the property, while a covered arcade in the vocabulary similar to the sheds connects this gateway to the front door of the house. “Entering through the old shed and connecting arcade gives a sense of ceremony to the everyday act of entry,” says Albert. The connector echoes the design of the old buildings. Albert created a courtyard between the main house and the outbuildings with this configuration. “It creates a rambling, informal quality to the complex,” he says.

The couple did not want an imposing house on the site, but something in keeping with the farmstead vibe of the older buildings. There were also size and height restrictions the architect had to comply with, which reinforced the couple’s desire for a modest cottage. The existing footprint was horizontal shape, so the architect designed a low, horizontal 2,830-square-foot design with a gambrel roof. The gambrel allows for second-story dormers while bringing the eaves to the first story, which helps maintain a low profile. “The gambrel roof sweeps out at the eaves in a graceful curve to broad overhangs that shelter generous windows,” says Albert. “The strong continuous eave anchors the building to the space.”

A stair tower was added to access the second floor to save floor space. With expressive roof brackets, a shallow pitched roof, and oversized corner windows, the tower offers cues that this is a new house and not part of the old farm buildings. “It also is a beacon or marker to people approaching the house,” says Albert. “The house has its own flavor but is compatible with the outbuildings.” Within the courtyard, Albert introduced a curved roof to add interest to an otherwise blank wall.

One important consideration was to orient the house toward the south to take advantage of the river views. “The plan for the main house was to design a narrow bar, which allows the main rooms to have two or three exposures,” says Albert. Multiple double-hung windows on the south side take in both views and the sun. “The deep eaves protect the house from the high summer sun, but in winter the house drinks in the light when the sun is lower in the sky,” says Albert. Besides passive solar, another fossil-fuel-conserving feature is a geothermal heating and cooling system. “The house sits low, which also keeps it friendly and approachable—we didn’t want the main structure to loom over the sheds. It really is an expressive Shingle Style house.”

Because of the small footprint, every interior space gets used. The spaces flow freely into one another, although they have distinct functions. There is no eat-in kitchen, so the dining room is used for dining, and the lack of family room means the couple uses the living room for reading and watching television. “The rooms are cozy, but the views throughout are expansive,” says Albert. A screened porch offers additional living space in the warmer months. It also protects the living room’s west-facing side from the hot summer sun. A wall of windows and doors divides the two rooms.

The interior detailing is charming with flourishes of both Arts & Crafts and Colonial Revival elements. High beadboard wainscoting, as well as square chamfered columns, offer Arts & Crafts detailing. A built-in window seat runs the length of the living room, and built-in shelving in both the living and dining rooms offer ample storage for books and pottery. The detailing on the stairs was inspired by an eighteenth-century Swedish design Albert came across in a book. The railings are distinctive flat boards with cutouts. The second-story ceiling is open to the roof trusses. A fieldstone fireplace anchors both the living room and master bedroom.

Bringing Back a 1920s Mediterranean Revival