Jennifer and Eric Miller were devastated when their 1899 Queen Anne house in Portland, Oregon, was ravaged by fire. They knew they’d need help repairing the damage, but after spending the previous eight years working to restore the house with their own hands and paying careful attention to original details, their biggest concern was finding someone who shared their respect for old homes. “We wanted to salvage as much as possible of our old house,” explains Jennifer.

When the first company the Millers contacted suggested tearing the place down and starting over, they were distraught. Then they found Arciform LLC, a Portland design-build firm whose motto is “Old homes, new life,” and designer Anne De Wolf, who helped guide the Millers through the challenges of a major restoration. From the get-go, a top priority for both parties was making as many sustainable selections as they could.

In a way the Millers were lucky. The fire started on a porch adjacent to the kitchen and primarily affected the back end of the house. Most of the original woodwork, tile, and hardware remained intact in the front rooms. In the damaged areas, Arciform’s team salvaged as much original millwork as possible. Then they cleaned it up and pieced it back together, using the saved moldings in the same rooms so that transitions to areas with restored millwork (which was specially cut to match originals) would appear more seamless. 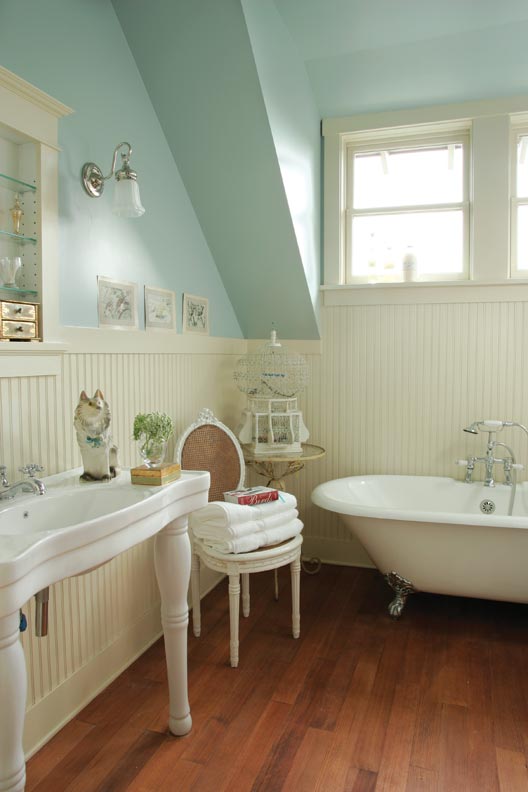 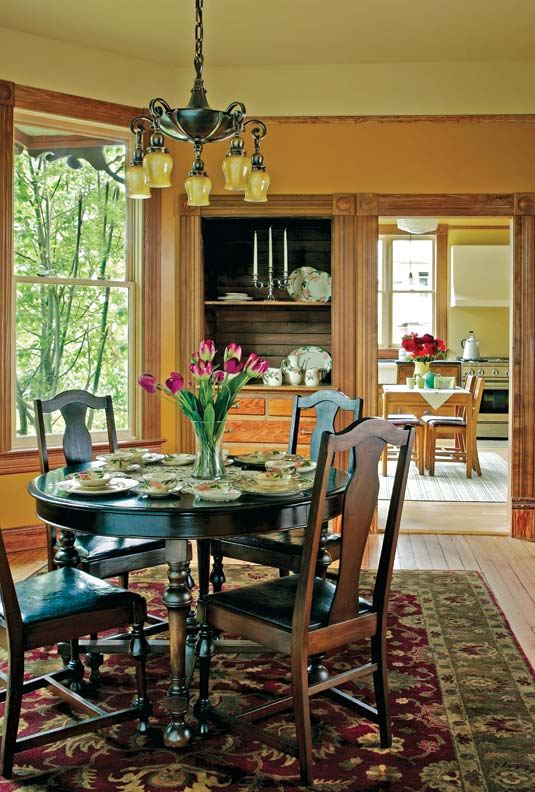 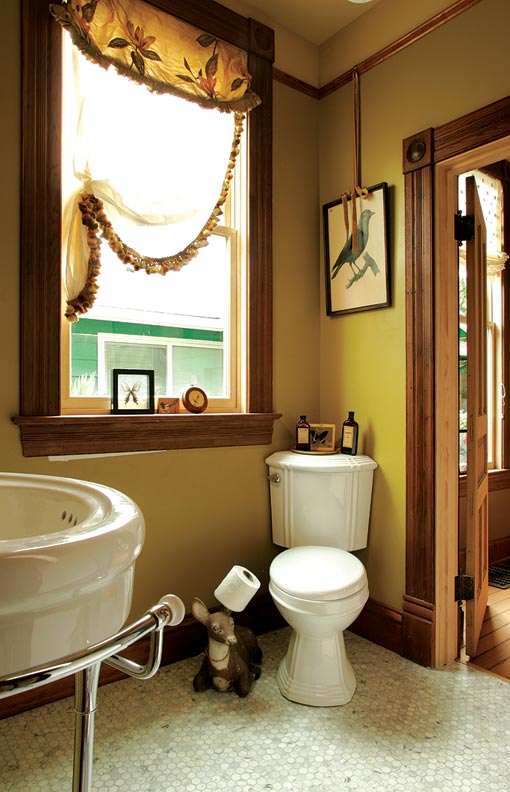 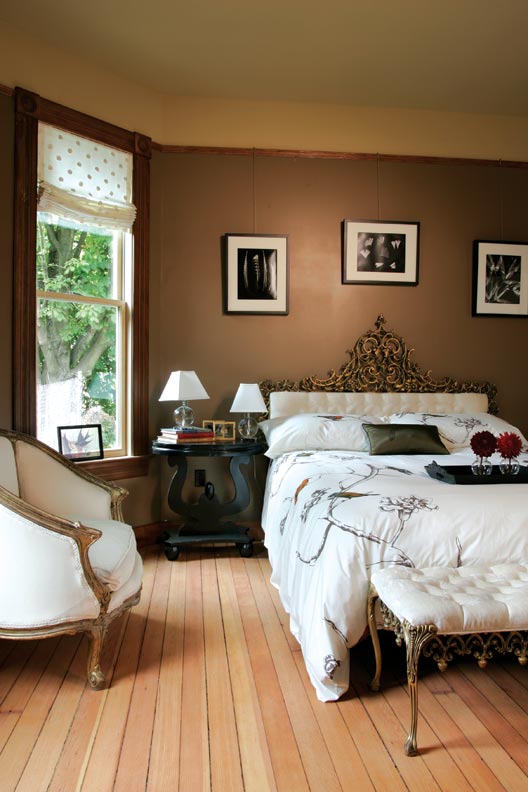 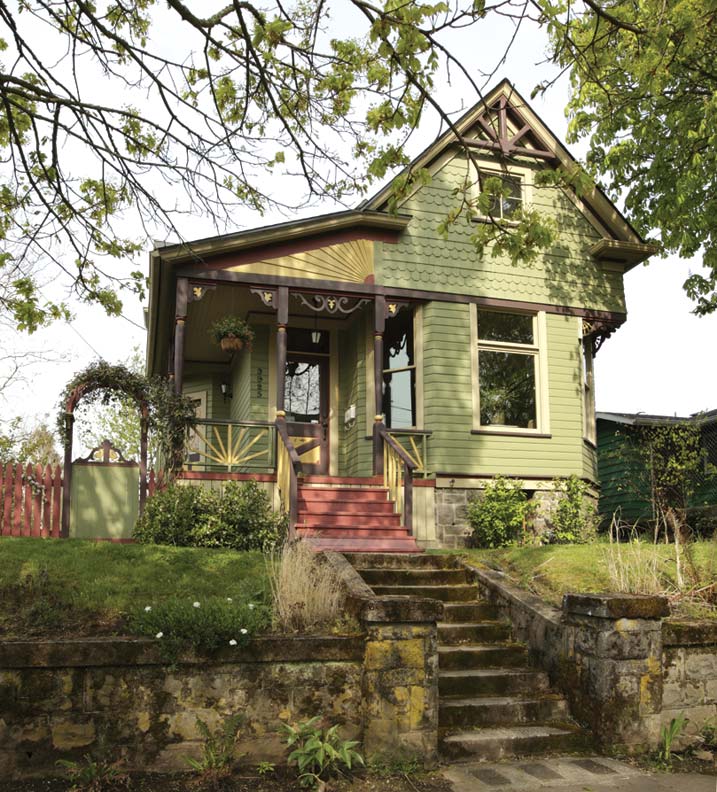 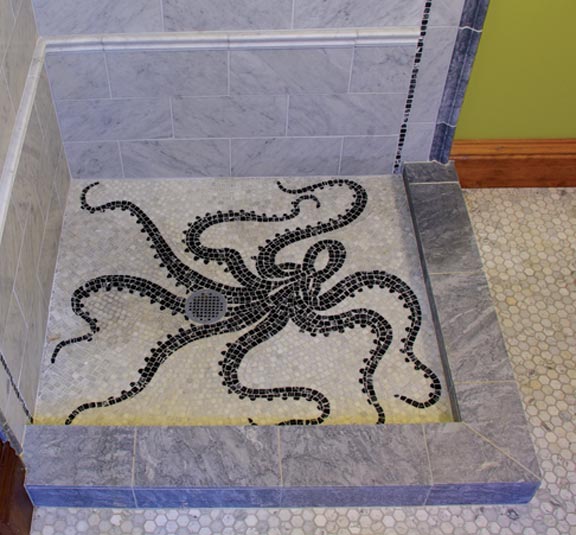 The original fir floors were repaired throughout much of the house with a good sanding and the understanding that they wouldn’t look perfect. An exception was the kitchen, where the damage was so severe that using reclaimed fir was necessary. The floors were finished with a coat of dark stain topped by OSMO (an environmentally friendly oil) for protection. In the kitchen, Anne recessed the refrigerator and designed several cabinets to look like old pieces of furniture to capture the feel of a room that had evolved over time. A farmhouse sink and soapstone counters complete the look. Arciform also added radiant heat throughout the first floor, since the floor was accessible from beneath. Other eco-conscious additions include solar panels, which are supplemented by an on-demand hot water heater; insulation throughout; and compact fluorescent light fixtures.

Some serendipity during repairs added to the house’s overall impact. The original stairwell proved too damaged to save, but because it had been terribly narrow and steep, rebuilding it exactly as it had been wouldn’t pass code. Anne found a new place for the stairs in a little-used bedroom, which opened up the floor plan and allowed her to add a pantry where the old stairs had been. Work on the downstairs bathroom revealed another unexpected find. While fixing the wall, Arciform’s team discovered the room’s window had once been larger. (Jennifer and Eric had suspected as much, since this window was smaller than those in the rest of the house). The window was restored to its original, late-1800s size.

Jennifer selected all of the fixtures in the restored kitchen and bathrooms. “It’s amazing how much time it took, researching products and details,” she says. She relied on magazines like OHJ—which she calls “old-house porn”—for inspiration. Anne added two era-appropriate elements to the fairly modest house—beadboard in the upstairs bathroom, and picture moldings throughout the downstairs. “Picture moldings are a nice historic element—true to the house’s timeframe—that let you change your mind whenever you want, without poking holes in the walls,” explains Anne.

As for paint colors, Anne suggested the historic palette from Miller Paints, a century-old Oregon company. Jennifer, a self-professed color freak (she admits to trying 19 shades of green before picking one for her bedroom), chose colors in a palette of late-fall shades for the downstairs, with lighter paints on the second floor.

Anne is proud of the way the house turned out. “Our goal was to make it feel like it had been there 100 years in sense of proportions, space, and accessories,” she says. Jennifer agrees that it does. And while she wouldn’t wish a fire on anyone, Jennifer says that in the end, “it became an opportunity for us to incorporate many energy-saving features we had always wanted to add, but weren’t able to before.”

A Stone Greek Revival in Ohio