Blending old and new is often the most difficult part of adding onto a vintage house—but for architectural historian Joan Lawrence, adding a sense of history to a new kitchen and dining room for her 1882 Carpenter Gothic house was easy, thanks to her passion for architectural salvage.

“The house was built as a modest summer cottage, and many of its original elements and furnishings would have been castoffs from a primary residence,” Joan points out. “So building an addition from secondhand items fit with the house’s beginnings.” For five years, she had collected locally salvaged materials—most dating from the 1880s through the 1920s—and carefully stored them in her basement until she had enough architectural components for the addition.

It was her love of salvage, in fact, that connected her with architect Dean Brenneman, who designed the addition—the two met while volunteering at Old House Parts, a now-defunct nonprofit salvage shop near Joan’s Maryland house. They began talking and realized they were kindred spirits when it came to reusing old materials. “She had collected radiators, doors, windows, a sink, a stove, light fixtures, hardware—she even had pieces left over from an old row house on Capitol Hill that she had restored years ago,” says Dean. At the time they met, Dean was deconstructing his grandparents’ carriage house in Rockville, Maryland, which had floorboards and timbers that would lend themselves nicely to Joan’s kitchen project. “My job was to find poetry within the pieces,” he says. 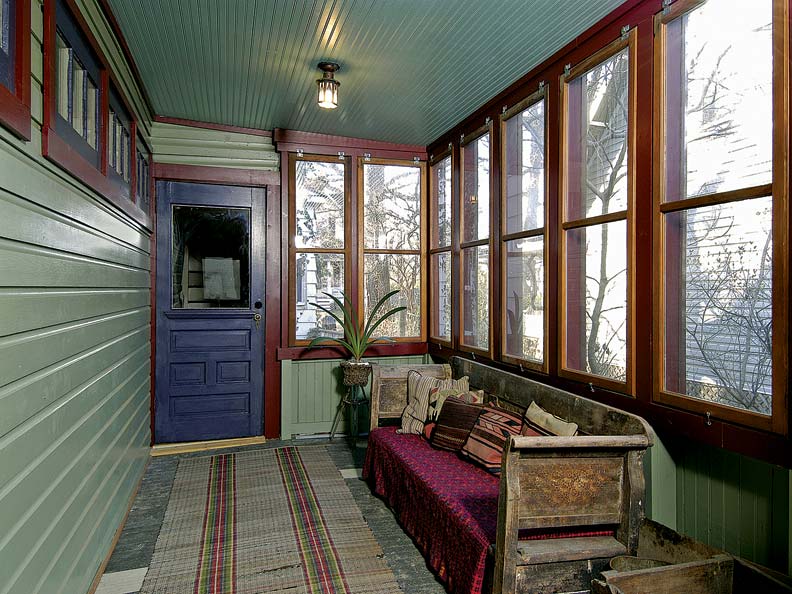 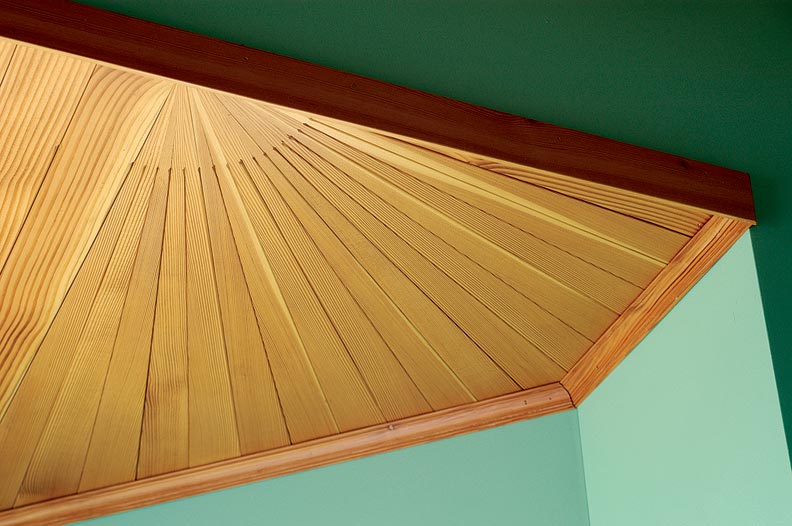 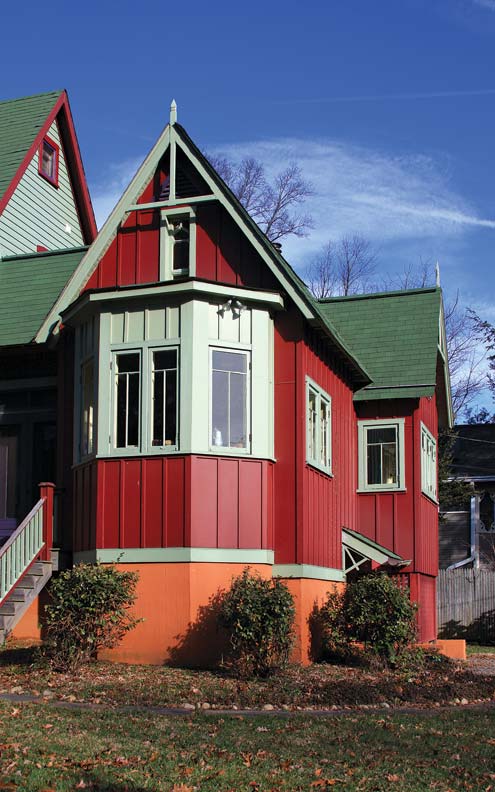 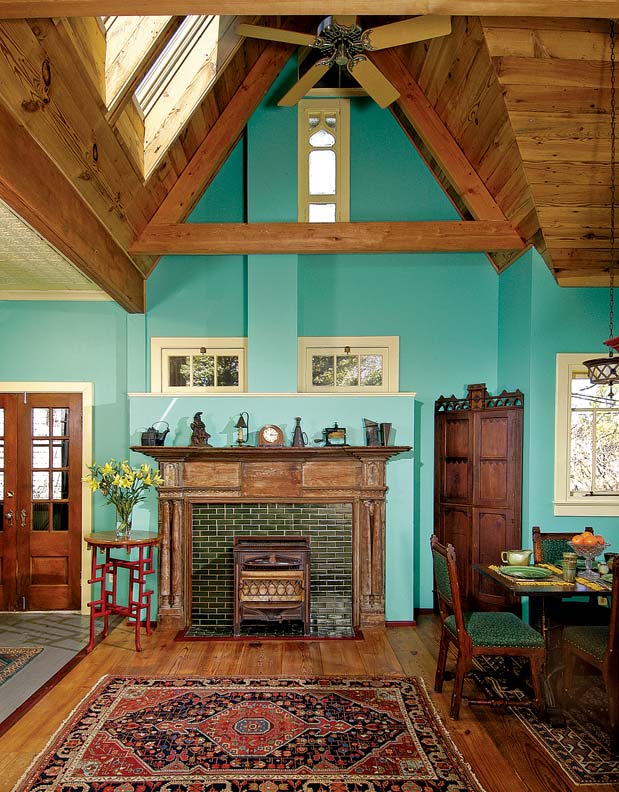 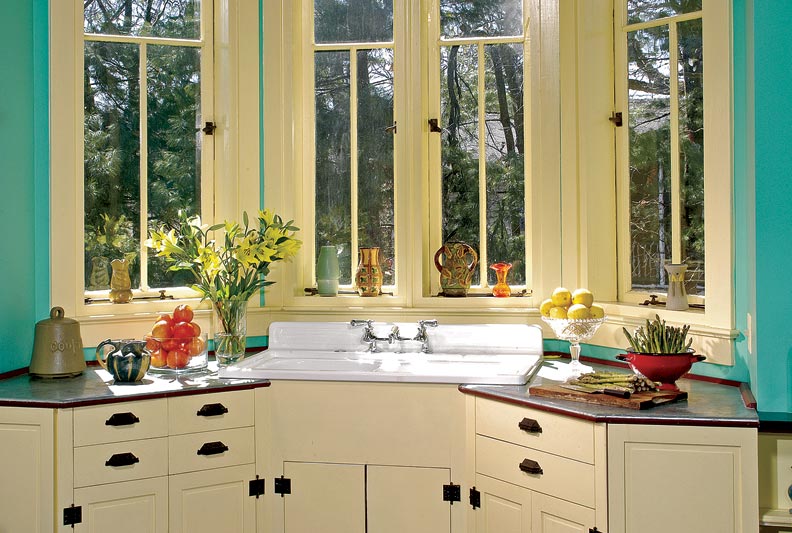 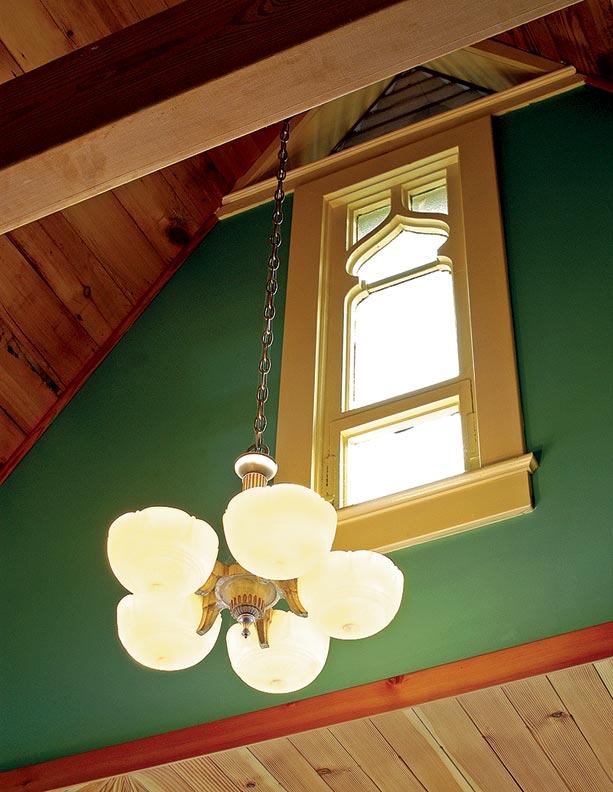 Dean designed the new addition within the footprint of an existing two-story 1950s addition, which looked woefully out of place on the old house. “Knowing that houses evolve over time, I have a more eclectic view of restoration,” he notes. “Rather than restore to a particular period, I mix and match elements in a project such as this one. It’s like working on a jigsaw puzzle—how will the new part fit with the old? It’s a challenge to create a cohesive whole—to make logic of several different pieces.”

To join the new addition to the old house, he followed the Secretary of the Interior’s Standards for additions, which state that while the addition will differentiate from the old, it should be compatible in massing, size, scale, and architectural features to protect the house’s historic integrity. In this case, that meant an addition that is subordinate to the original house, mimicking its roof pitch and gable ends, but on a smaller scale. Joan chose a brick-red color for its exterior to distinguish it from the original structure’s German board siding, which is painted green.

The addition is filled with a treasure trove of well-crafted materials. The connection between the two wings of the house features an early 1900s tin ceiling Joan discovered while volunteering at Old House Parts. The onion-domed window in the gable came from a Russian Orthodox church, and the space is lit by Art Deco pendant fixtures from Australia.

To bring an old-house feel to the kitchen’s design, Joan took inspiration from British kitchen guru Johnny Grey and his book The Art of Kitchen Design. In the book, Grey advocates for kitchens with an unfitted design—a concept based on historical models before cabinets were built into walls, when kitchens were composed of freestanding pieces of furniture like hutches, cupboards, iceboxes, and worktables. “You have much more flexibility when designing an unfitted kitchen,” Dean points out.

For her kitchen, Joan found the freestanding pantry that sits next to her Northstar reproduction fridge—made of milk-painted boards reclaimed from an early 18th-century house—at a secondhand store. She found the marble-topped baker’s cabinet cases—now used as a food-prep area—at an antiques shop; the 1920s Detroit Jewel gas stove she bought from a friend and had refurbished. The only fitted cabinets are found under the bay window—craftsman Ed Mroczka of The Uncommon Carpenter replicated them based on ones Joan had seen in a book on bungalow kitchens.

Not only did using salvaged materials give Joan’s kitchen the old-house aesthetic she sought, but it also kept the project green. The U.S. Environmental Protection Agency (EPA) estimates that residential demolition accounts for 5 million tons of debris per year nationally; EPA figures suggest that only 52 percent of this is recycled. That’s the equivalent to tearing down two Empire State Buildings each month and throwing the debris away. “When you use salvaged materials, you’re not fabricating anything new, so there is no ecological expense,” says Dean.

Not to mention, it’s friendlier on the budget. Dean estimates that this project netted a 60-percent reduction in materials costs by relying so heavily on salvage. Take the windows—Joan scored 11 casement windows reclaimed from a 1920s house at The Brass Knob in Washington, D.C. “If we had bought new windows, they could have cost $20,000, but by using recycled, we only spent about $2,000,” says Dean. “Those windows are in great shape—they even came with their original frames.”

Thanks to its thoughtful design and quality materials, the handsome, efficient kitchen is an appropriate companion for the old Carpenter Gothic—and good for the planet at the same time. “It’s tragic how much beautiful building material is thrown into landfills each year,” Dean says. “If we can use existing material in our projects, we can reduce the waste stream.”

Nancy E. Berryis the editor of New Old House magazine. She lives in an 1870s Queen Anne on Cape Cod.

Online bonus: Find an architectural salvage store near you with our online directory.