Despite the popularity of modern design, most Americans overwhelmingly prefer houses with familiar forms and details such as pitched roofs, dormers, gables, and crown moldings, among other elements. Jill and Rudy Casasola are no different.

Washingtonians who live in the Massachusetts Heights neighborhood near the National Cathedral, the Casasolas love the look and feel of traditionally styled homes. So when they bought a down-at-heels 1980s vacation house on Maryland’s Eastern Shore, they were clear what they wanted to do and hired the Washington-based firm Barnes Vanze Architects to do it.

“They thought they would be able to renovate the house, but it was in bad condition,” explains Melanie Giordano, the project architect who helped design the home with principal Stephen Vanze. “It had been sitting empty for a while and didn’t really take advantage of the site, so we decided to keep the footprint and rebuild the house.” 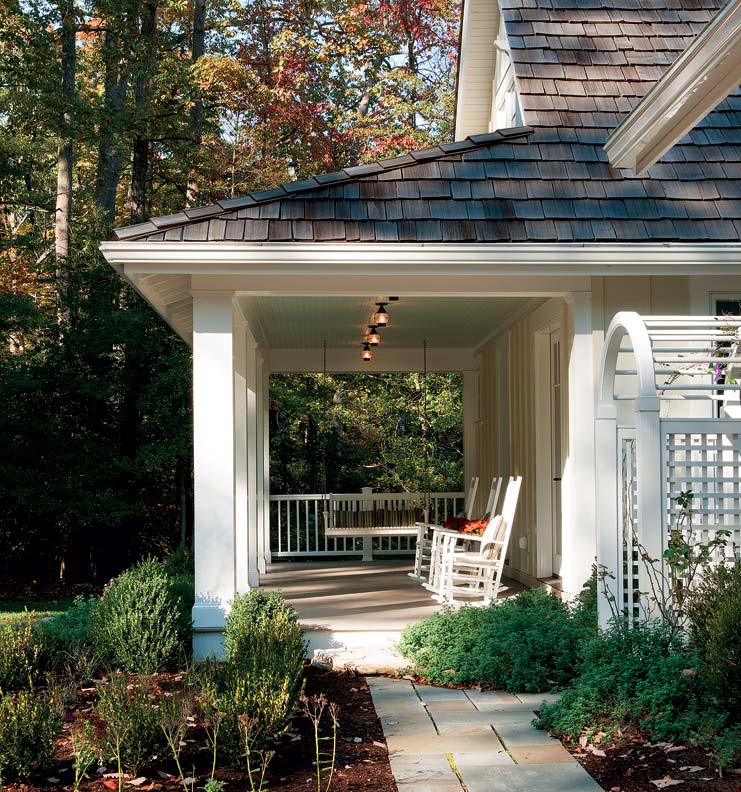 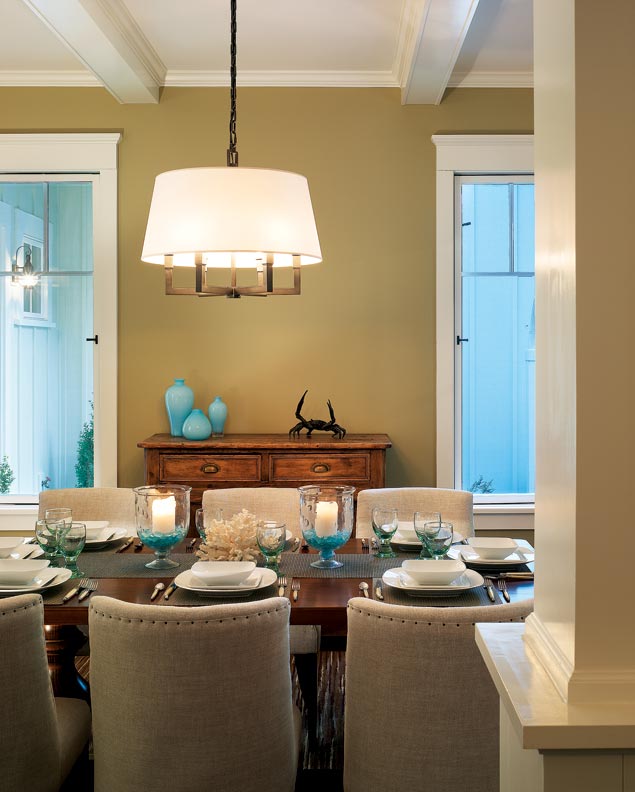 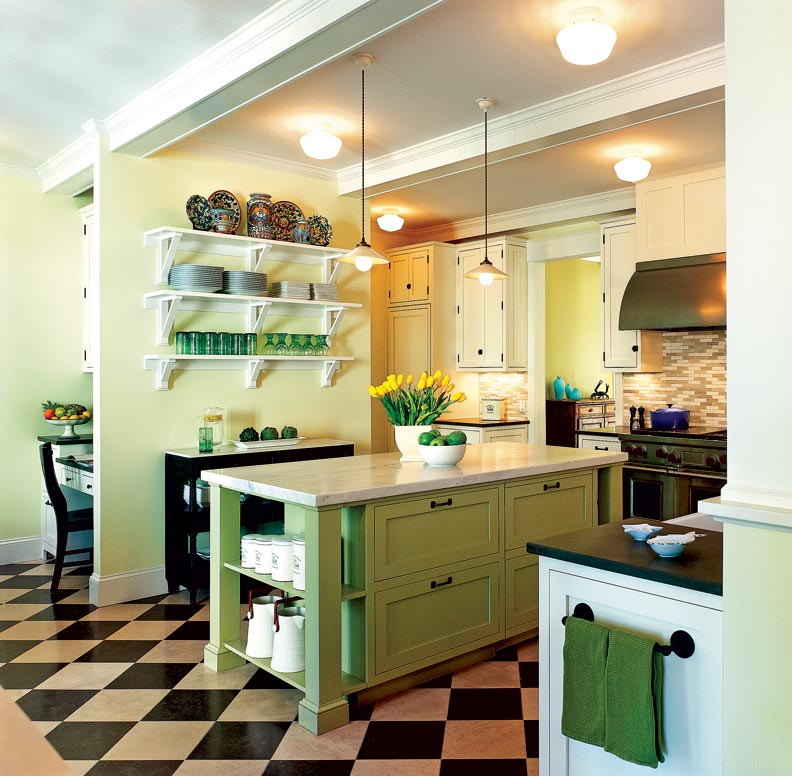 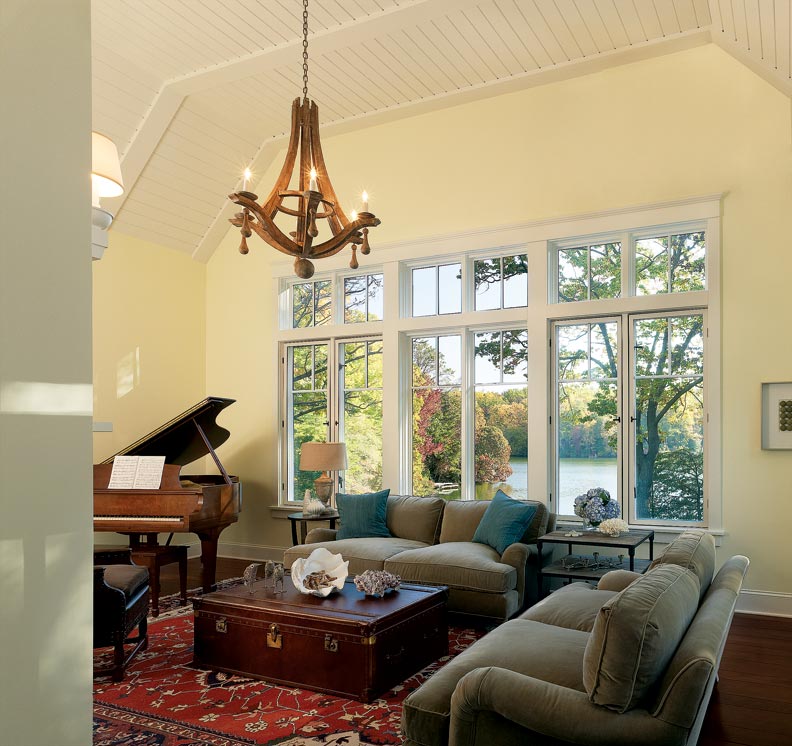 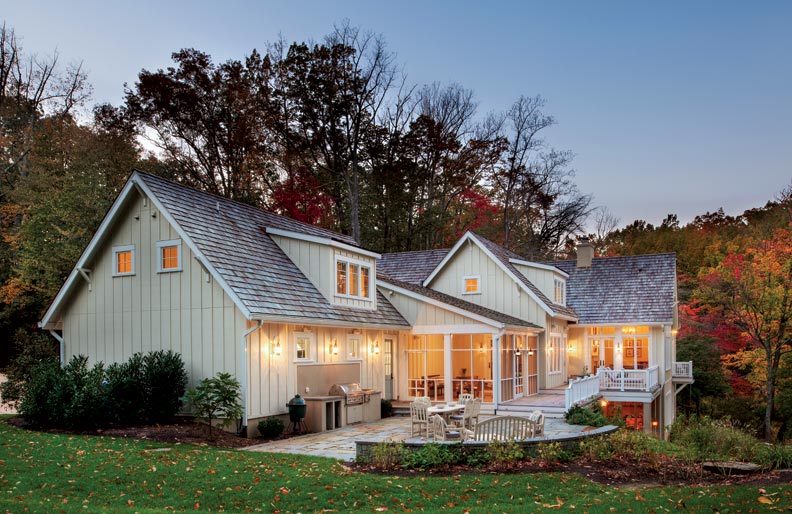 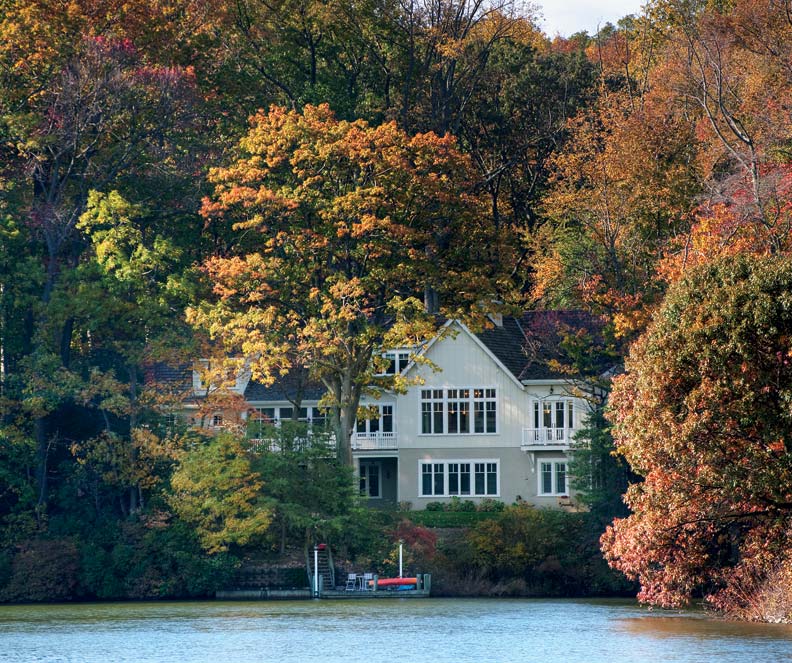 The house is located on Gibson Island in a private community that was developed in the 1920s and ’30s. Situated on a wooded 2½-acre lot, the existing A-frame structure failed to take advantage of the location on a freshwater lake called Otter Pond, so exploiting the location was priority number one, says Giordano. The homeowners had other requests, too.

“I really wanted a large kitchen with room for a large breakfast table overlooking the pond,” Jill says. “We asked for a first-floor master bedroom with a pond view. We wanted the three boys’ rooms and a separate guest suite to be upstairs. We requested a place for the boys to hang out with their friends and also a screened porch, which we had at our first Gibson Island house and didn’t want to give up.”

Barnes Vanze Architects designed an almost 8,000-square-foot cottage-style home that looks as if it has been there since the 1920s. “Because it’s nestled on a hill, it gave us the opportunity to have a house that from the front was modest in scale but that opened up to the water in the back,” Giordano explains.

As you drive up to the house, you are greeted by elements that signal the architectural style—a small front porch, a cedar shingle roof, and board-and-batten siding. The front door leads to an open main floor that is organized around the kitchen, which sits to the right, as do the dining and breakfast rooms.

“The living room and master bedroom in the rear of the house have sweeping views of the water,” the firm writes in its project statement. “A deck and screened porch extend the living spaces to a large patio with an outdoor kitchen. A meandering path through the woods leads to a dock on the lake. Tucked in the dormers on the second floor are children’s and guest bedroom suites. The basement houses a large game room, family room, and bar, all with views of the water.”

One of the main features of the interior, Giordano points out, is the low wall with columns, giving the space a human scale and helping to delineate the use of each area. In addition, the firm reinforced the cottage aesthetic with traditional details such as the white painted cabinets, the cabinet hardware, and the type of detailing used for the door and window casings. Giordano adds, “Also, we used beadboard for both the screened porch and the front porch ceiling, and used a board ceiling for the living room.”

Lighting also helps re-create the charm of an old house. Giordano notes, “We used a combination of wall sconces, chandeliers, pendants, and other decorative fixtures to provide ambient and task lighting, accommodating the different spaces.” The owner, she continues, carefully selected fixtures that introduced different colors and textures to the rooms, which “reinforced the fresh and open feel of the house.”

Though the house seems a classic iteration of a new old house, it employs modern-day systems that were unavailable 80 years ago. The architects used spray-on foam insulation to make the building envelope tight and energy-efficient, and added aluminum-clad insulated windows. Fiber cement exterior cladding should resist moisture and decay for decades; PVC exterior trim will never cup, rot, or deteriorate.

For the Casasola family, who spends about eight weeks at the home in the summer, the new place is a welcome respite from the sweltering Washington summers and a relaxing getaway from their very formal 1927 center-hall colonial.

“We love how Barnes Vanze Architects was able to design a traditional cottage-style home that looks like it’s always been here but has all the advantages of a new home,” Jill says. “We love how quiet and comfortable it is. It is a large new home but has the charm of an older home.”

A House Remade for Two

Reviving a Castle-Like House in Michigan