“We wanted to live by the sea,” recalls Wendy LeStage Hodgson, “but when we saw this house, we fell in love with it, and that was that.” The Federal-style farmhouse is just a few miles inland, set in the gentle fields of a North Shore community in Massachusetts. The symmetrical core of the house, about 2,500 square feet, was built in 1830, with a wide center hall. When Wendy and her family arrived in 1993, the central block was one room deep, with the kitchen and dining room off to one side. Ten years later, the Hodgsons added on, following an old-house tradition of “telescoping” additions that step to the side of the main block. The addition—a new kitchen and family room with master suite above—connects to a new garage/barn by way of a mudroom entry. The house today is 50 percent larger, but its neoclassical façade is ageless. 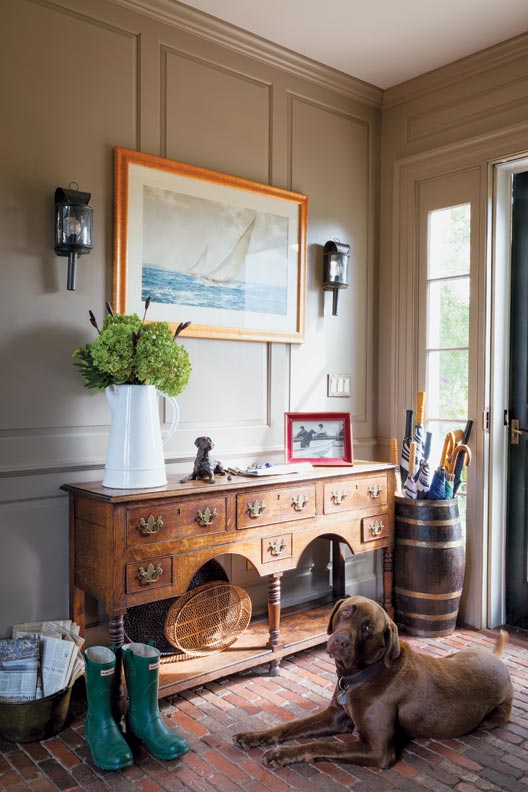 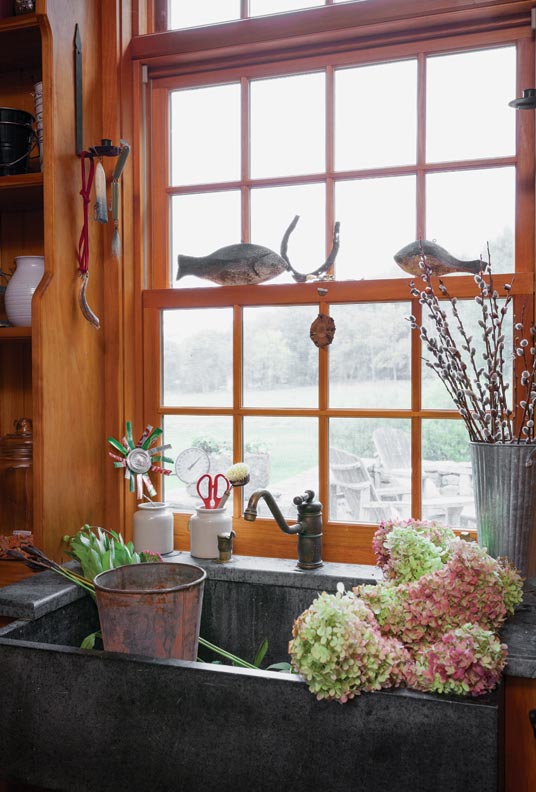 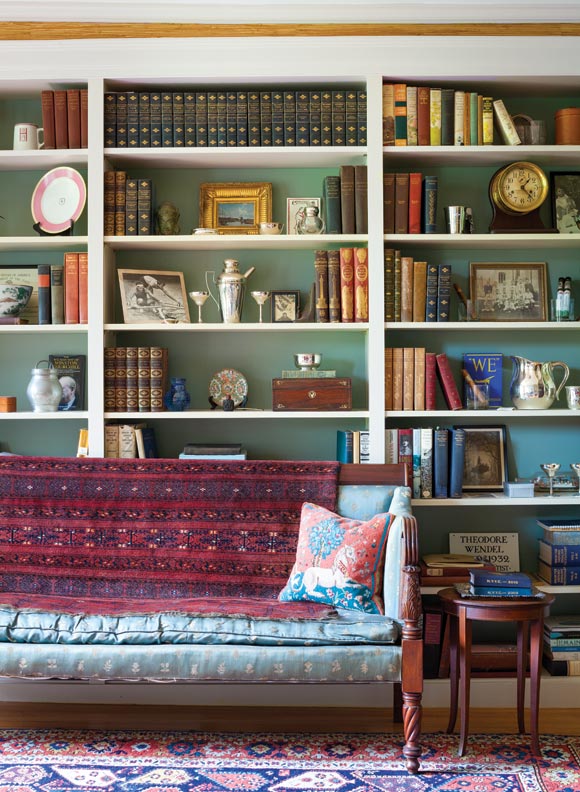 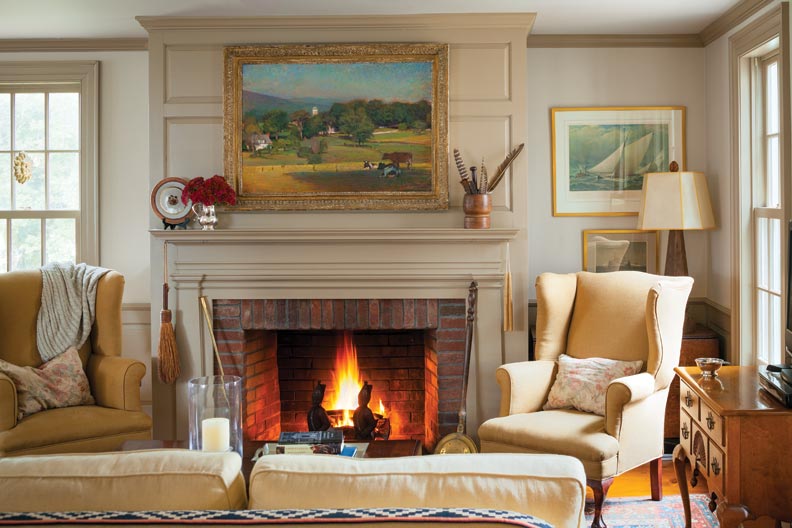 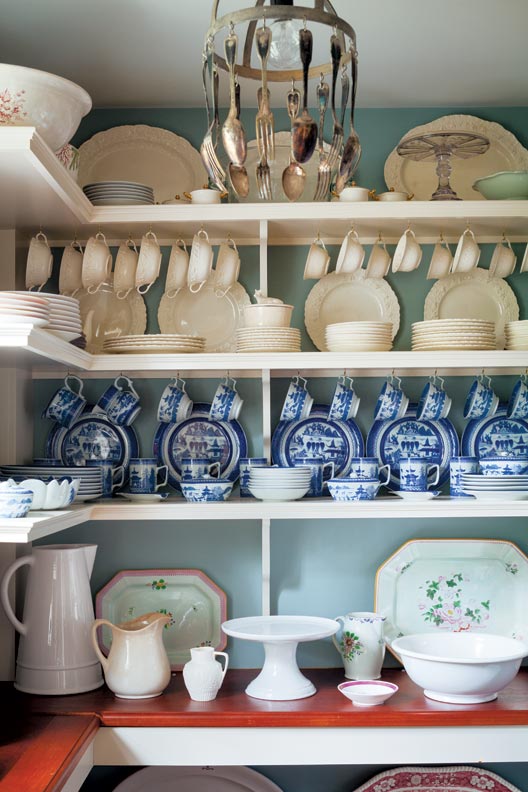 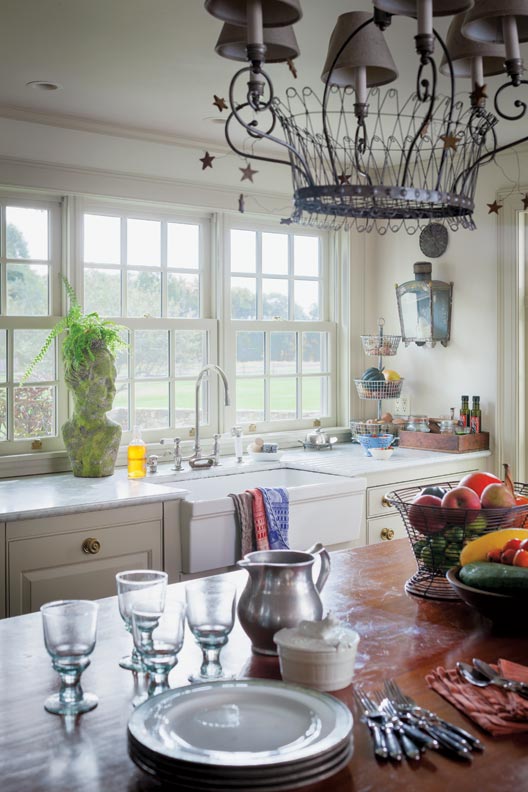 “We are almost positive that the house originally faced the other way,” says Wendy, who is an interior designer at Carpenter & MacNeille, a design–build firm in Essex, Massachusetts. “Long before our time, we’ve been told, what is now the back door was the front door. Given the level of detail of the two doors, that makes sense. And what is now a rear sunroom has the proportions of a large entry porch.”

The wide center hall runs between the front and back doors. Large enough to function as a room, the hall holds the library and part of the collection of antique furniture Wendy and her husband inherited. She lined its walls with traditional grasscloth above the wainscot.

“This was originally a seasonal house,” Wendy says. “In fact, in the late 19th century, it was the summer home of an American Impressionist artist who painted all around this area.”

Big entry porches and center halls open at both ends are not typical in New England; they point to a house meant for warm weather and visitors. The wide center hall seems related to the dogtrot, a covered passageway open at both ends that lent its name to a house type popular in the southeastern United States. Dogtrot or breezeway cabins provided natural cooling.

Old rooms include a Federal parlor and, across the hall, a “country Federal” room with a simple fireplace mantel and trim. The historical flows into the traditional; Chippendale furniture, grasscloth walls, and gently worn oriental rugs are part of a familiar New England sensibility and an understated decorating approach.

The newer section of the house has its own generous entry, which is a less formal way into the house. The entry opens to a mudroom, then to the large new kitchen, with its dining and seating areas.

“I wanted a paneled entry hall,” Wendy says about the new space, which, like the original entry hall, is paved in bricks. She patterned her garden room, or mudroom, on a room from an English manor house that she saw in an old book.

For the additions and renovations, “we reused parts of the house whenever we could,” Wendy says. The soapstone sink that now holds flowers in the garden room, for instance, was once the house’s kitchen sink.

As the latest steward of this evolving old house, Wendy Hodgson has combined old and new to make a comfortable and beautiful home.