Garden-grown peas taste better than frozen. An original oil painting sure beats a print. Almost always, it seems fair to say, genuine trumps imitation. So when Santa Barbara architect Thomas Bollay and his wife, Nancy, decided to build their own home and thought in unison, “Let’s do a Spanish house,” they meant the real thing, not just an ersatz stucco construction with Spanish-style accoutrements. Both had lived in Spain, after all, and they knew the difference.

“We saw Europe through its fishing villages.” Architect Bollay recalls with enthusiasm his two-and-a-half-year odyssey cruising the Continent on the family boat when he was just nine. Around the same time, his wife was a military brat in Spain. Both had exposure to the Spanish countryside beyond the tourist attractions. For Bollay, “the first inklings that I wanted to be an architect” came during this sojourn, and it was an authentic casa del campo—a provincial farmhouse from rural Spain—that he wanted to, and did, build for himself and Nancy. They named it Casa de la Torre in a nod to the Spanish Colonial Revival architects of the early twentieth century, for whom towers (torres) were a favorite theme.

Since its completion in 1991, Casa de la Torre, nestled in the Montecito foothills, has been hailed as one of the most authentic interpretations of the Spanish Colonial Revival style. Taking two and a half years to research and another two and a half years to build, the house stands as a testament to the architect’s patience and integrity as well as his skill and artistry. 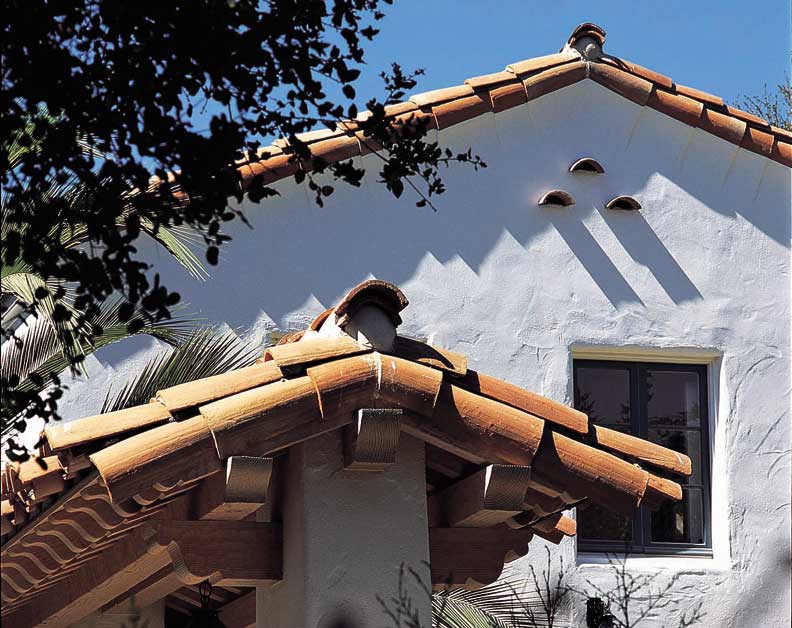 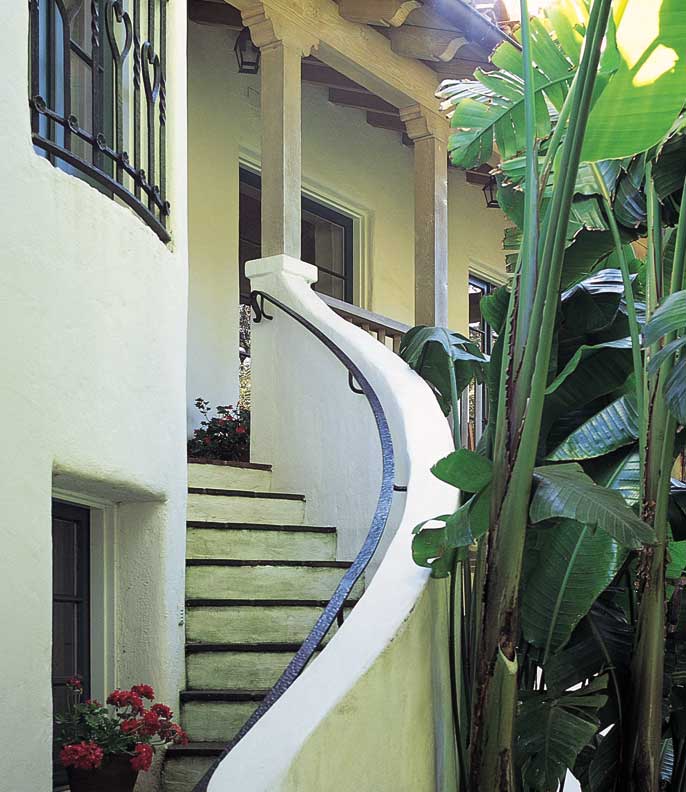 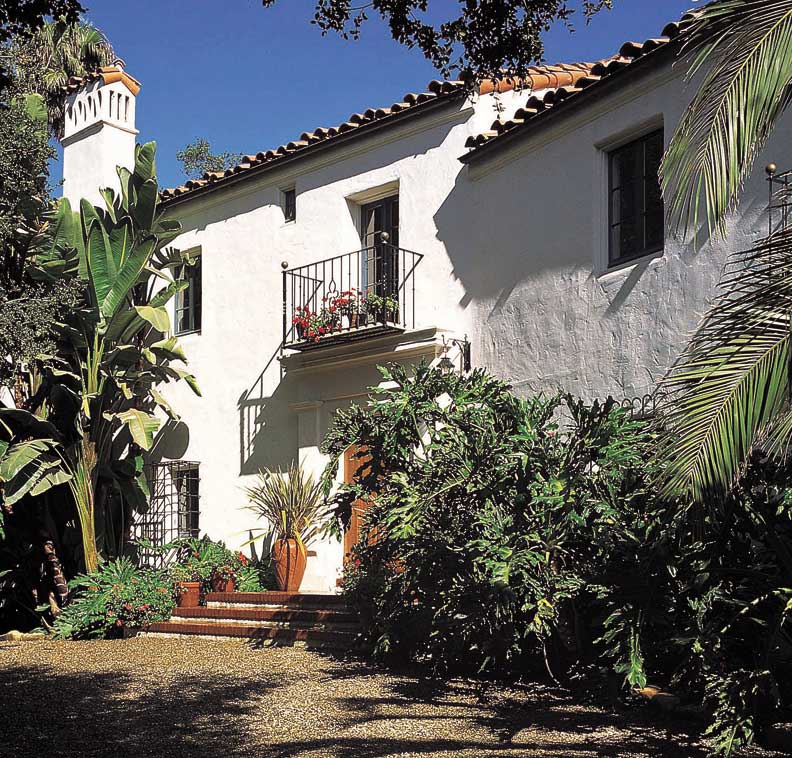 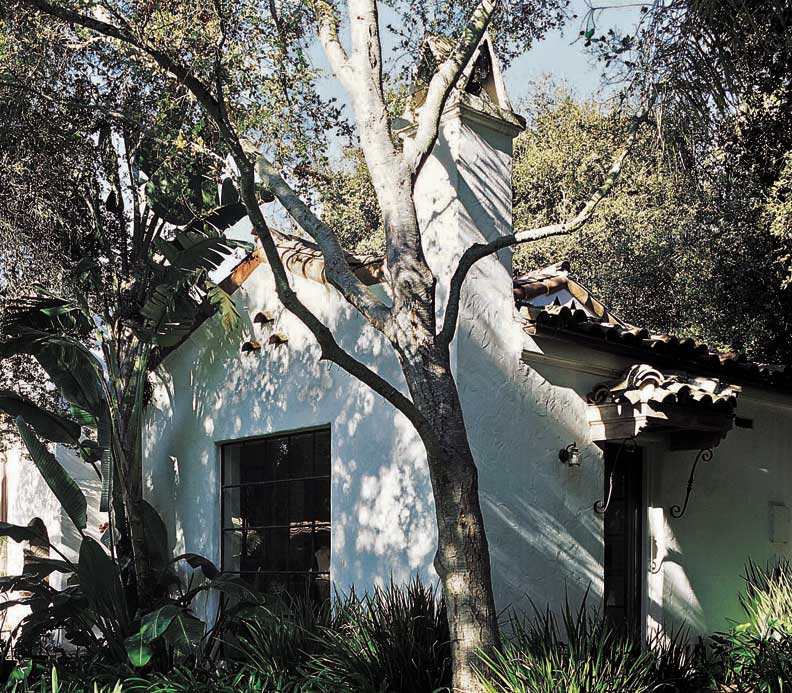 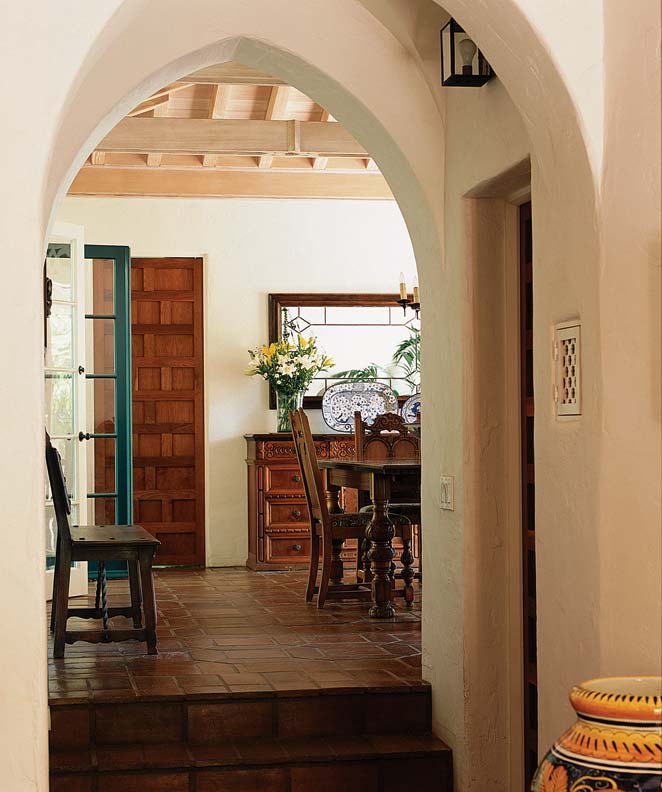 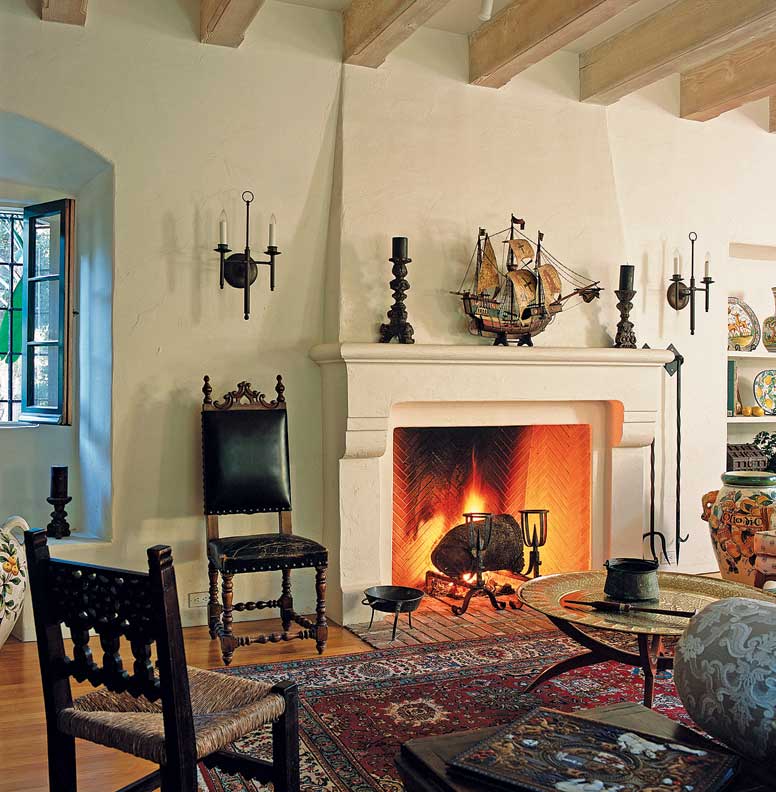 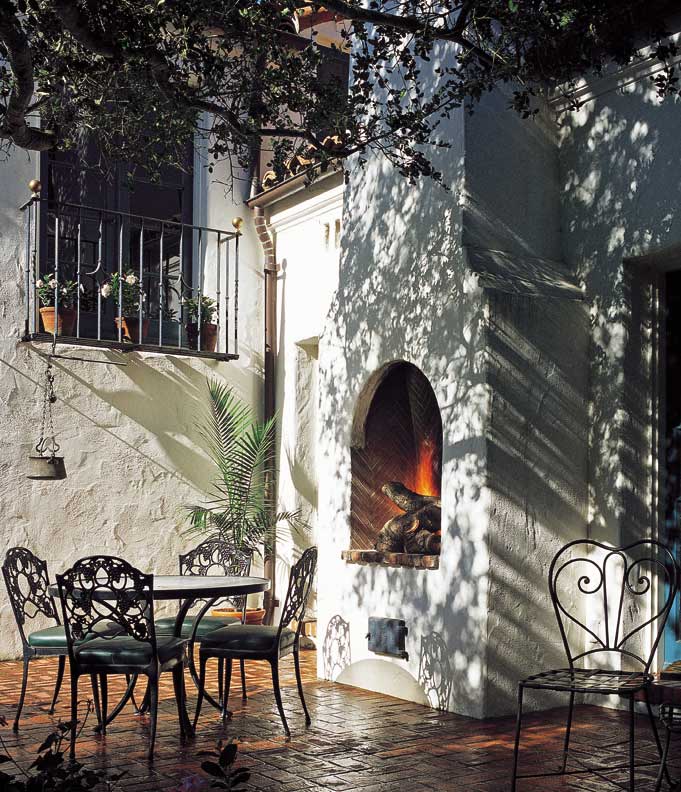 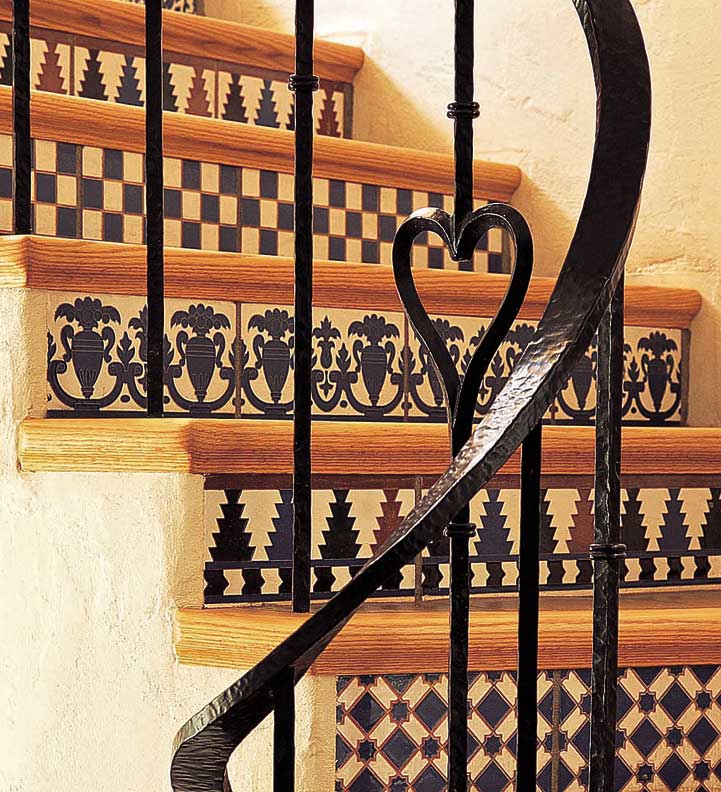 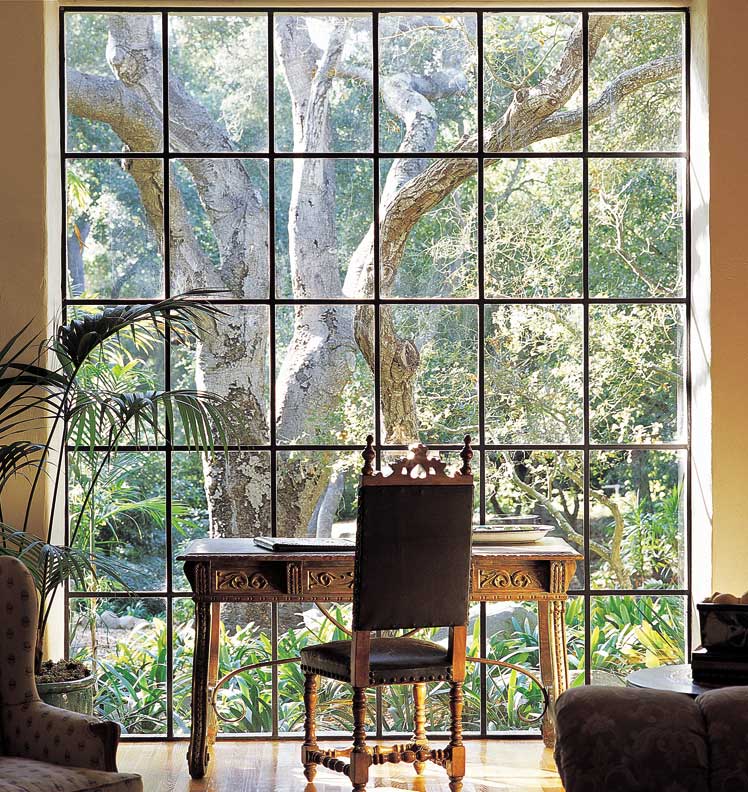 Stucco walls, red tiled roofs, arches, and ornamental detail are some of the commonly recognized hallmarks of this regional vernacular architecture. Interpret these too loosely and you get a house that evokes the romance of the style but falls short when it comes to the nuts and bolts, figuratively speaking. The use of “Hispanic elements as mere dressing,” says Bollay, was discouraging when he and Nancy set out to do research for their home. The architectural inspiration that the couple had expected to find in abundance in Santa Barbara was in fact scarce. They scoured neighborhood after neighborhood before it hit them: “Suddenly,” says Bollay, “we noticed that everything built since the 1920s didn’t capture the magic. Every time we found a rare little jewel, we would learn that it was designed in the 1920s.”

With this information, it didn’t take long for the architect to zero in on George Washington Smith, the foremost proponent of Spanish Colonial Revival architecture in the first quarter of the twentieth century. Fortuitously, while serving on the Montecito Board of Architectural Review, Bollay met noted architectural historian David Gebhard, who was dedicated to preserving the city’s architecture. Gebhard, who passed away in 1996, had a collection of Smith’s original architectural drawings. “This was exposure to a unique resource,” explains Bollay, the excitement he felt that day still palpable now, some 20 years later. “These drawings showed me what the Beaux-Arts-educated architects were thinking then.”

In the manner of a classically trained architect, Bollay carefully studied Smith’s original sketches and working drawings before designing Casa de la Torre. In addition, he toured many of the houses built by Smith, who designed more than 100 projects in his 11-year practice, most in Santa Barbara. Casa de la Torre is, says its creator, an homage to Smith and his like-minded architect peers Reginald Johnson, James Craig, Joe Plunkett, and Wallace Neff. David Gebhard has written that the success of Casa de la Torre is due in part to the architect “consciously trying to experience the original prototypes as the architects of the 1920s would have.” Adds Bollay: “There aren’t many others interested in approaching houses this way. It’s my quirky little specialty.”

Quirky, maybe; admirable, for sure. Bollay’s many months of meticulous research included two trips to Spain, where he says he obsessively measured columns and courtyards. “Do your observations first,” something Bollay learned from studying Smith, is his mantra. “Smith was such a good designer because he wasn’t just adding Spanish touches at the end,” says Bollay. “He mimicked the massing of farm buildings; he designed in 3-D while designing the floor plan.”

The poorly executed Spanish-style houses in abundance today, continues Bollay, are inferior due in part to their architects’ indifference to details. “You can’t just say to a craftsman, ‘Make it old.’” Not one to cut corners, Bollay opted to have mission tiles cast by hand when the machine-pressed ones failed to meet his standard for authenticity. And his thick walls made of stucco on wood frame beautifully simulate solid-stone construction. What sets Bollay apart and is the subject of his forthcoming book, Santa Barbara Details, is his insistence, like Smith’s, on supplying his craftsmen with full-size drawings to use as templates. Using these, says Bollay, can’t help but result in buildings that are better proportioned and better detailed.

From wrought-iron balconies to hand-painted ceramic tiles, from whitewashed walls to heavy wood ceiling beams, Casa de la Torre exudes an Old World air. But even a stickler like Bollay can take authenticity just so far. With this house, he says, “Our goal was to gracefully embody both tradition and modernity. The plumbing fixtures, for example, are modern, just as those in George Washington Smith’s houses were contemporary for the time. The floor plan is open, and there are oversized modern-style windows.” In response to Santa Barbarans living outside a great deal of the year, points out Bollay, “Our terraces must function as out-of-door living and dining areas.”

The unique, pinwheel-pattern house plan incorporates wings that are only one room deep. Lack of air conditioning in the 1920s encouraged floor plans with cross-ventilation. “Today I’m not necessarily designing for ventilation,” explains Bollay, “but for the play of light that is a byproduct of this very interesting floor plan.”

Twenty years after he finished and moved into Casa de la Torre, the architect still loves his house. Through what he calls “a process of relearning what an architect in the 1920s did,” Bollay’s homage to his predecessors— especially George Washington Smith—will stand the test of time as only a true classic can.