Before Peter Zimmerman began designing the clapboard house on a pastoral lane in Fairfield, Connecticut, he listened to his clients—and then he listened to the land. The cultural and historical roots of the setting spoke volumes to Zimmerman about how he and his team would use proportion, scale, and balance to create the finished home.

“The house needed to look as if it was absolutely in sync with the site. The environment talked to us,” says Zimmerman, principal of Peter Zimmerman Architects in Berwyn, Pennsylvania. Originally Zimmerman and his clients, a family with two teenaged children, intended to salvage what Zimmerman calls “an old quasi-Georgian Federal-style house” that occupied part of the new home’s footprint. “My original inclination was to save it and add on, but it wasn’t salvageable,” Zimmerman says. “It had been tremendously compromised over the years.”

The new house, constructed by Timothy Hine of Hine Builders in Southport, fits seamlessly with the original vernacular. This is important, Zimmerman says, especially because the original was well known in the local community. “Our intention was that people who know the area would see the new house and believe it was renovated and added onto,” he says. “The memory of the original home and property has remained.” 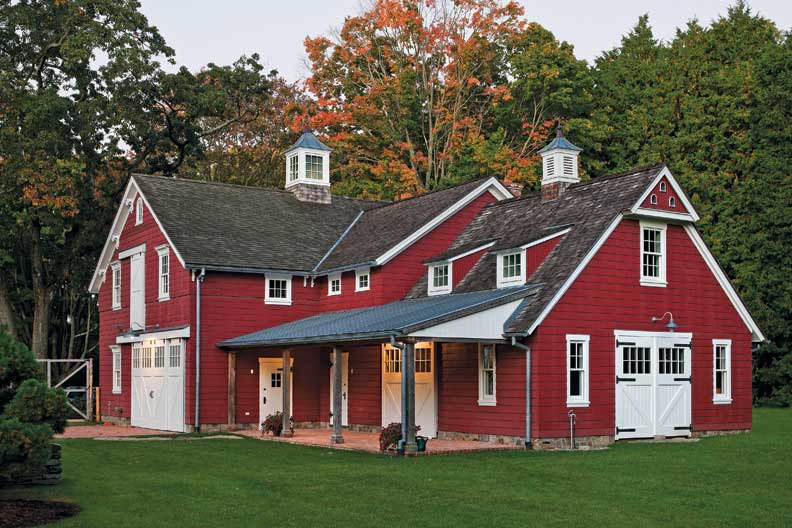 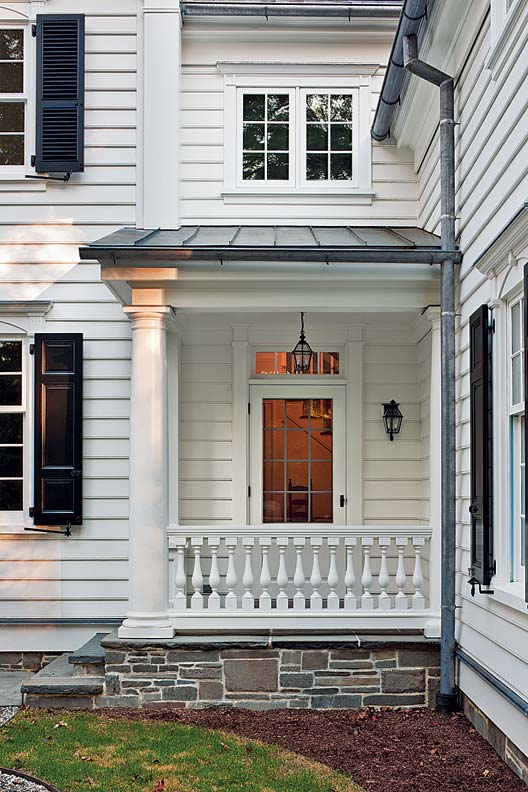 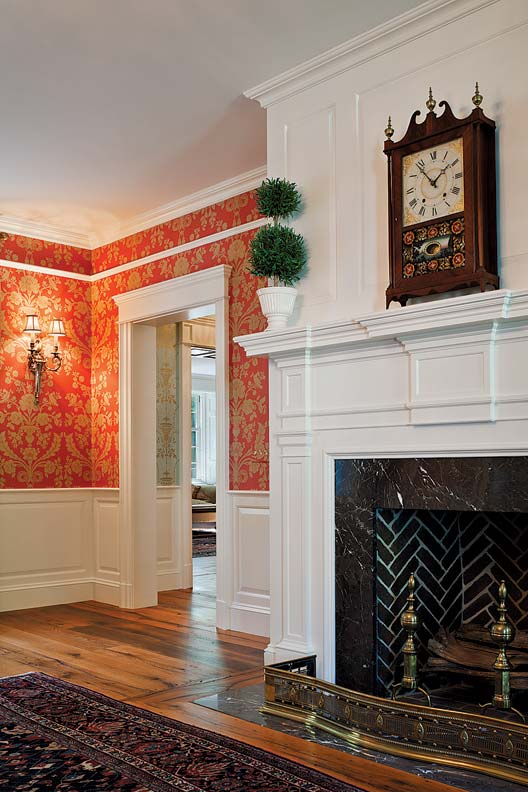 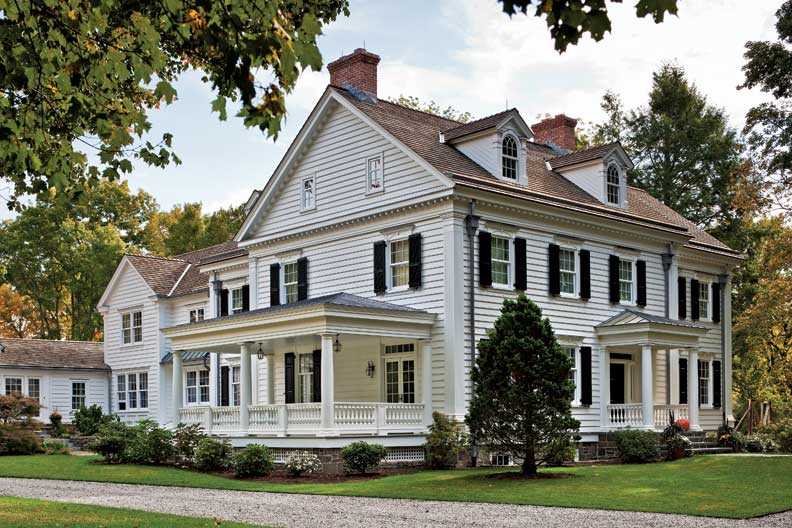 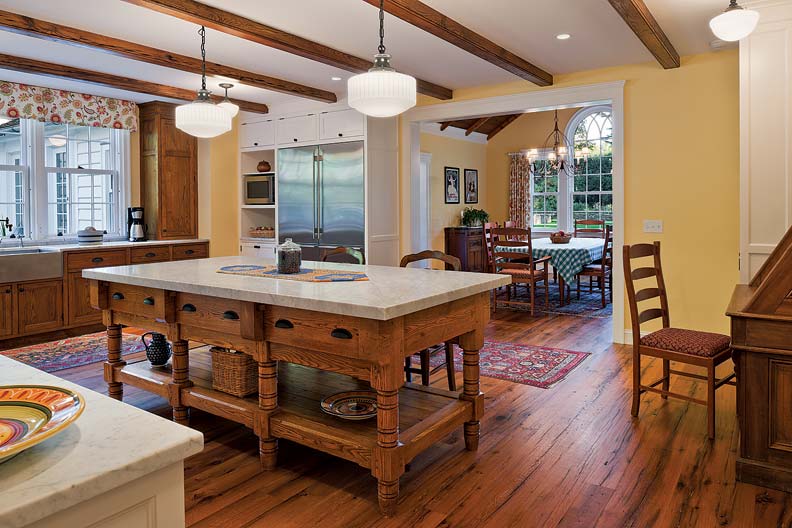 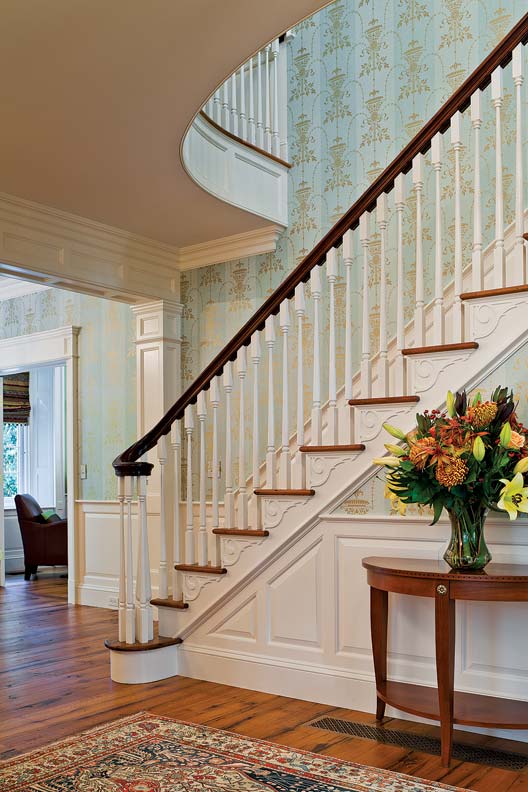 He and project architect Bill Johnson started by placing two central masses perpendicular to the street, then adding two additions parallel to the street. Smaller additions were added to the side and rear, suggesting a progression of growth over time. This harks to many houses of the late 1800s and early 1900s, when homeowners “grew” their houses as they attained more wealth or had more children. Zimmerman explains, “We really wanted it to feel like it had grown organically on the site.”

He succeeded, and beautifully. At first glance, it’s difficult to believe the stately house, with a stunning red barn in back, is new. Several factors create the illusion: lines that perfectly recall the original’s Georgian-Federal spirit, the careful detail and craftsmanship, and the use of antique and salvaged materials, including white oak flooring that possesses a very tight grain and what Zimmerman calls “that original patina that only comes with age.”

Just as the homes of Fairfield’s earlier residents expanded to serve growing families, Zimmerman realized this home needed to serve his clients and their young teens. “Although we create houses that are clearly tied to the past,” he says, “they also have to translate to today’s lifestyle.” The home accomplishes this by presenting two areas, one segueing gently into the next. The front portion of the home holds the more formal spaces: living room, dining room, study, and—on the second floor—the master bedroom suite. Porches are positioned on either side. The more relaxed areas, including the kitchen and family dining area, are toward the back, with the pantry and back stairs in between.

The interior details bolster the subtle move from formality to casual living. The front of the home has rich architectural details: crown molding, pilasters, wainscoting, meticulous dentil work, and half-round dormer windows. Moving toward the back of the house, says Zimmerman, “many of those architectural details peel away and become more simplistic in nature.” In the family area, rooms are smaller in scale and less elaborate. Door jambs become flat, crown moldings are simplified, and wainscoting is absent. “In the back, scale and massing step down on both the exterior and interior,” Zimmerman says.

The owners both love to cook, and the kitchen, Zimmerman says, is “the hub of family living.” Light floods the room from three sides, as it does in the living room, family room, and dining area. The correct balance of light was foremost on Zimmerman’s mind from the beginning of the project and is used to best advantage, both for its pleasing visual effect and its way of expanding space. Every hallway in the house, for instance, ends in a window. “If you can bring in enough natural light, the whole space becomes transparent,” Zimmerman says. “The eye doesn’t have to readjust. Light just flows through the spaces.”

One of the most impressive of Zimmerman’s effects is in the striking staircase at the front entry that ascends to the second floor. Every detail is exquisite: a strong balustrade, a perfectly carved flute on the railing’s turnout, and wooden brackets underneath each step. In another area of the house, on an exterior corner, is a downspout and scupper, framed by a formal pilaster and dentil molding—all the pieces assembled in a coherent manner.

The land suggests the same gentle segue. Formal gardens grace the front of the house; toward the back of the property are plots filled with herbs and cutting flowers. Further back still is an enormous vegetable garden, one of the owners’ favorite places.

The property and its setting captured Zimmerman from the inception of the project. As he talks about the gently rolling terrain and majestic hardwood trees, Zimmerman says that if he had not become an architect, he would be a land conservationist. Both his parents were ardent conservationists, and he was raised to believe in its primary importance.

And in many ways, Zimmerman’s work is more at the intersection of architecture and conservation than straight down the path of architectural design. “One might think my career is based on building; it’s really not,” Zimmerman says. “Most houses are built to last about 30 years. Our structures are built to last 100 years. In 100 years, they’ll be renovated, not torn down.”

Mary Grauerholz is an award-winning feature writer and editor with a particular focus on architecture, style, sustainable building, health & wellness, and waterfront life.