Ladybugs have been considered good luck since the Middle Ages. And as every gardener knows, they’re also good for the earth. Once in a blue moon, there is a magical moment when the vivid little bugs become living art. Peter Zimmerman, principal of Peter Zimmerman Architects in Berwyn, Pennsylvania, saw this firsthand when he and his wife, Eliza Zimmerman, were moving into their 18th-century farmhouse in Chester Springs, Pennsylvania, 20 years ago.

The Zimmermans’ children were exploring the home’s back property, when their young daughter ran into the house, beyond excited. As Zimmerman relates, “She said, ‘Dad, there’s a tree with millions and millions of ladybugs!’” It could have been something out of a fairy tale: a tree alive with the fabled little bugs. The Zimmermans knew then that they would name their house Flyaway, after the ladybug nursery rhyme. 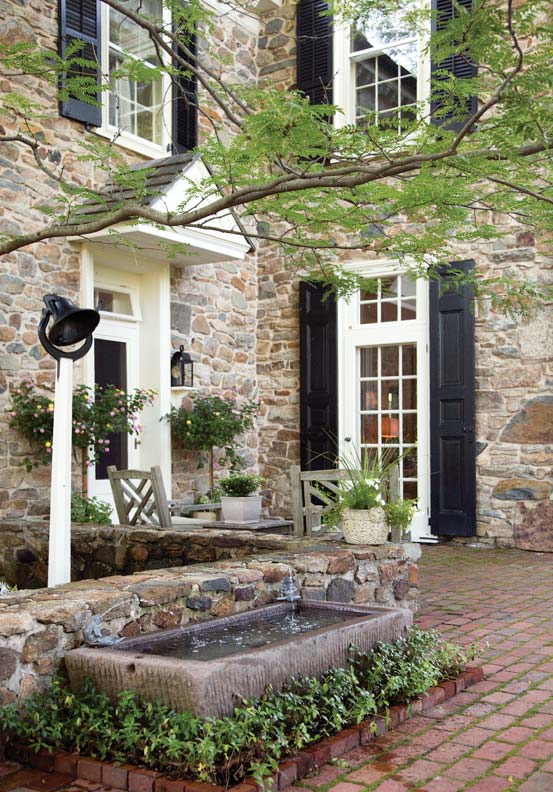 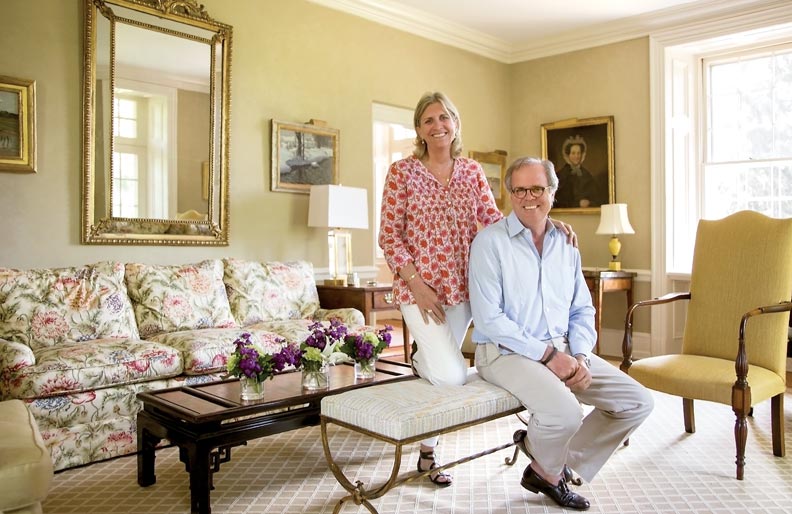 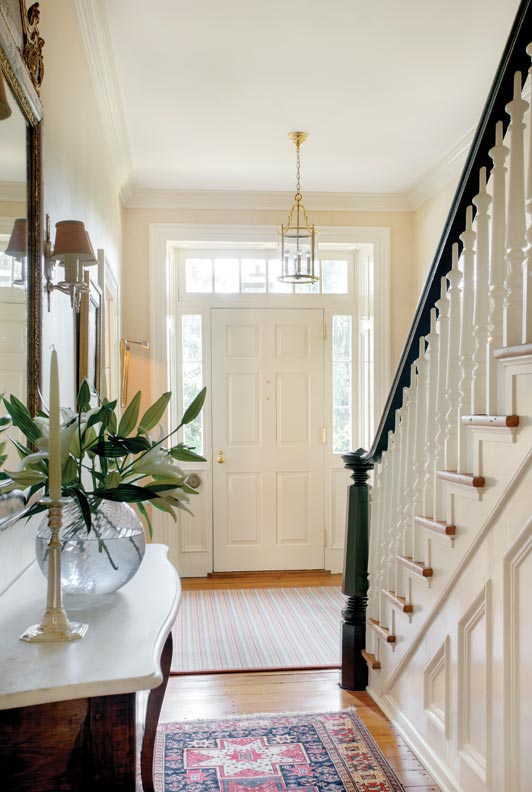 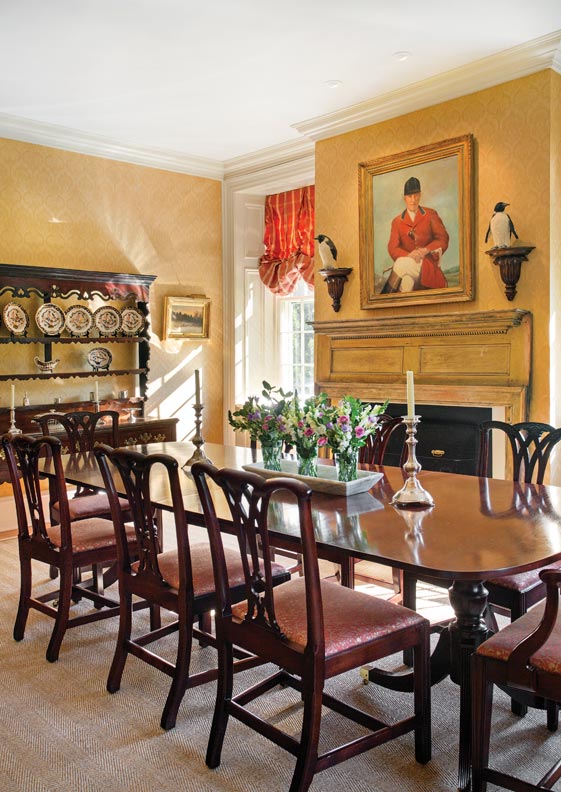 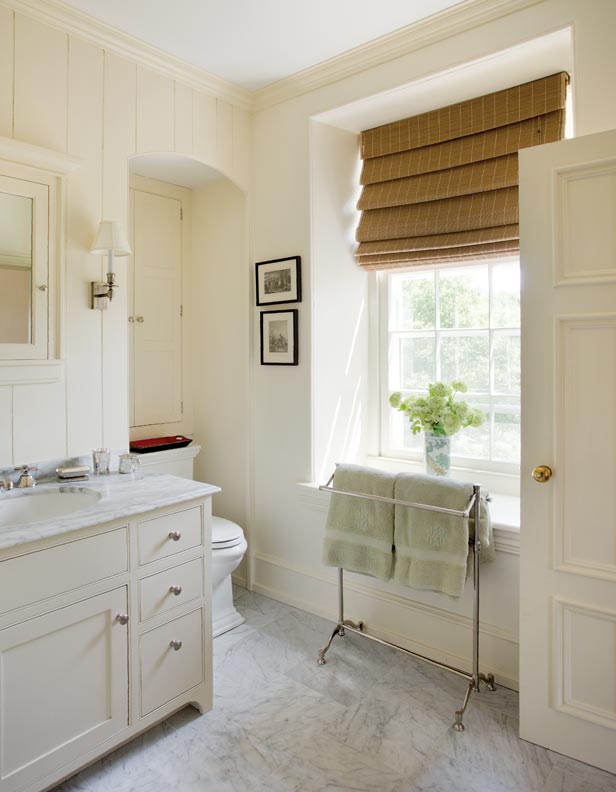 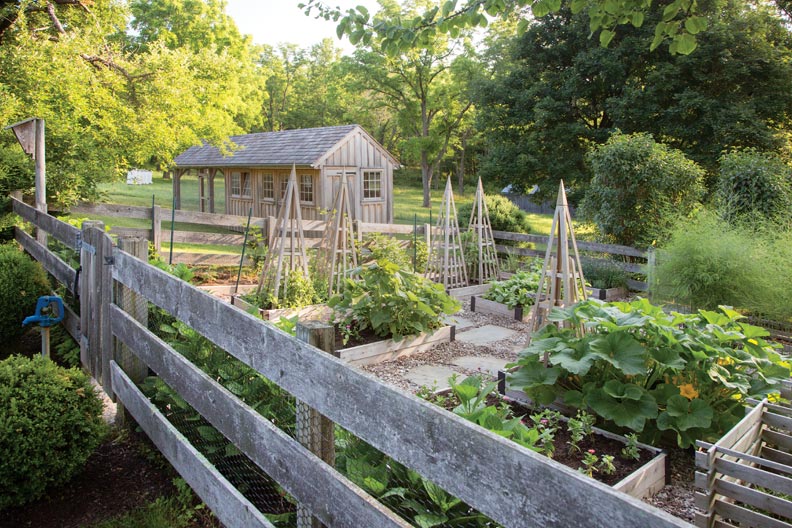 Today, Flyaway retains a timeless connection with its setting, more a thriving nexus of family and lush nature than a stately stone structure. The Zimmermans would have it no other way. The choices they have made in updates through the decades—allowing signs of former renovations to stand, designing rooms more around family life and treasured possessions than formality, and letting most of the 10 acres revert to its natural state—confirm that Flyaway is all about living, laughing, and letting things be.

Zimmerman believes that the art of great architecture lies in creating designs that are strong but not apparent, and this tenet is clear at Flyaway. “Architecture can’t dominate the furnishings or the site,” he says. “It’s not a stage set.” And after all, this is the home where he and Eliza raised their son and daughter, now in their 20s, and welcomed many other family and friends. From the beginning, the couple looked at the breadth of Flyaway’s strong character.

The first major addition to the original house was in the 1890s, when a mansard roof and a large addition were completed. Flash to the 1960s, when the house was colonialized. The Zimmermans let many of the style changes remain, such as the Victorian-era brackets under the cornice on the exterior’s front stone mass. “We chose not to strip those away,” he says. The same concept— letting features from renovations stand—is mirrored in Zimmerman’s architectural practice, located on Philadelphia’s Main Line. As Zimmerman says of the firm’s work—historically based architecture consisting of new houses and older ones requiring additions and renovations—“we try to peel away and find the best.”

Inside and out, nature is ever-present at the Zimmermans’ home. Nine-foot ceilings allow natural light to pour in from dormers and deep windows. A family-designed chicken coop, beehives, and a garden planted with vegetables and flowers dot the property on the edge of several acres that the family allowed to grow as natural pastureland and meadow. Leaving so much natural growth is important to the family. As Zimmerman says, “Often with these houses on 10 acres, owners treat as much of it as they can as lawn.” Letting nature take over, he says, “is appropriate to the cultural and historical landscape.”

The home’s interior is spacious, light-filled, and soothing, a mood set with warm wall colors, such as yellow tinged with burnt umber, and antique furniture that tells many stories. In the soft peach-toned kitchen stands an island of antique French oak from New Orleans, an eye-catching centerpiece. A papier mâché elephant head in the space the Zimmermans call “the big room,” with “ivory” of salvaged plastic knives, was purchased at a fundraiser for animal rescue. “We found one piece, then another,” Zimmerman says. “It’s more a composition than a suite of furniture.”

Family and friends congregate in areas that are most suited to the moment. “It changes,” Zimmerman says. “Like every family, people come over and we end up standing around the kitchen island.” The big room is used more in the summer, French doors spilling out to an awning-covered area. Peter and Eliza often spend evenings in the study, where Eliza builds a fire many nights. The living room and dining room ring with cheer around gatherings of loved ones. “All my great memories of my grandparents and being in our summer place, more than half revolve around the dining room table,” Zimmerman says.

Outside, the property is just as alive, the air filled with the swooping, singing, and buzzing of bees, birds, and small animals ducking into the marsh and pastureland. And yes, there are still plenty of the little bugs that were the original inspiration for Flyaway. “We still have a large population of ladybugs,” Zimmerman says with a chuckle. They are a perfect fit—another sign, Zimmerman says, of how the landscape harks to another era. “It’s something more reminiscent,” he says, “of what it would have been 100, 150 years ago.”