Clara Gabriel fell in love with the façade of her Chicago home the first time she saw it in 2002. Tall and narrow, the 1890s brick Italianate town house with terracotta and stone trim occupies three floors over a basement in the city’s Lincoln Park neighborhood.

But once Clara stepped inside, she felt decidedly less enamored. At some point—probably in the mid-20th century, when households had dwindled in size and many neighborhoods had lost their families to the suburbs—the house’s multi-story arrangement made it an easy target for conversion into apartments. By the time Clara got there, virtually every last bit of original architectural detail—doors, trim, built-ins, hardware—had been removed, presumably for sale as salvage.

The building’s most recent owners had returned it to a single-family residence, but the stark interior they’d imposed was completely out of place. “The whole front half of the house was a big, long white room with wood floors,” says Clara. “No parlor, no front closet, no entryway. It reminded me of a bowling alley.” In fact, Clara had seen this treatment in so many once-fine residences that she had come to consider it something of a style in its own right, albeit a jarring one. “You walk into these beautiful Chicago brick homes and brownstones and think, ‘Is this an old house in Chicago or a Mies Van der Rohe high rise?,’” she laments.

Still, this house had one element she hadn’t seen elsewhere: a two-story space at the rear, with windows on both levels, that had been added on, probably during the 1980s. It flooded the open-plan kitchen and family room with light, which she adored. 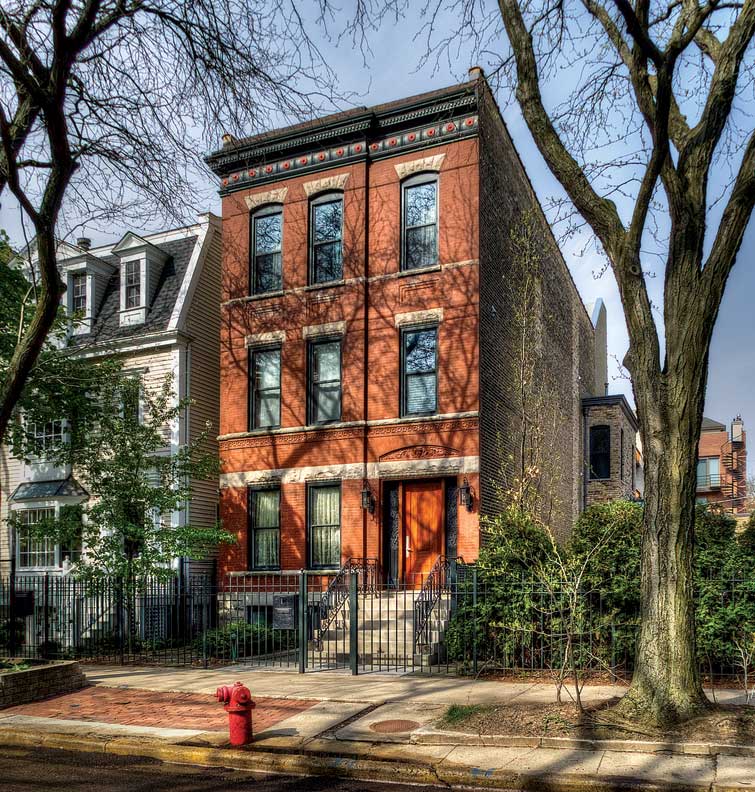 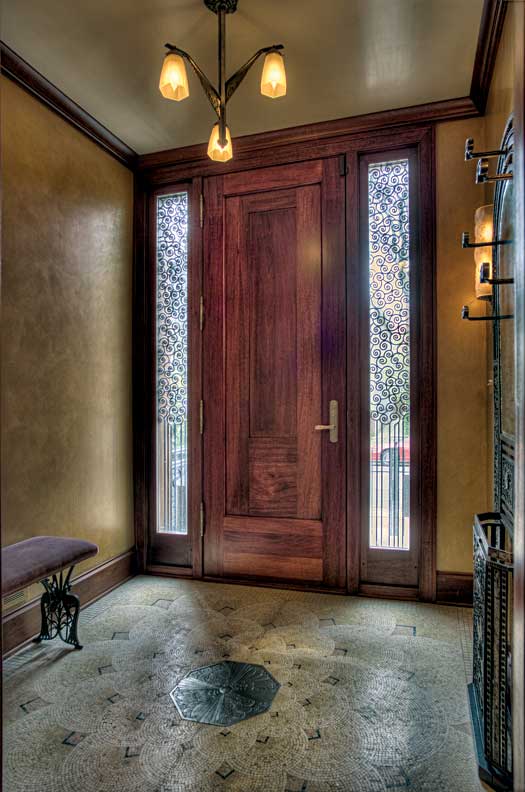 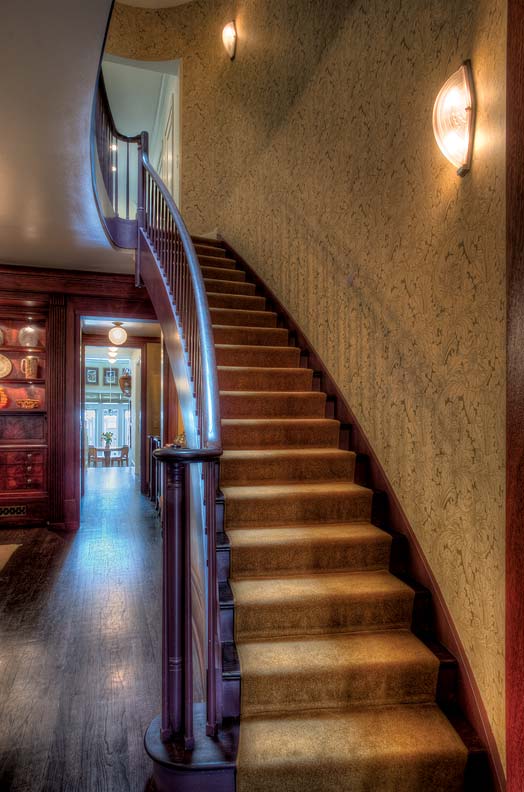 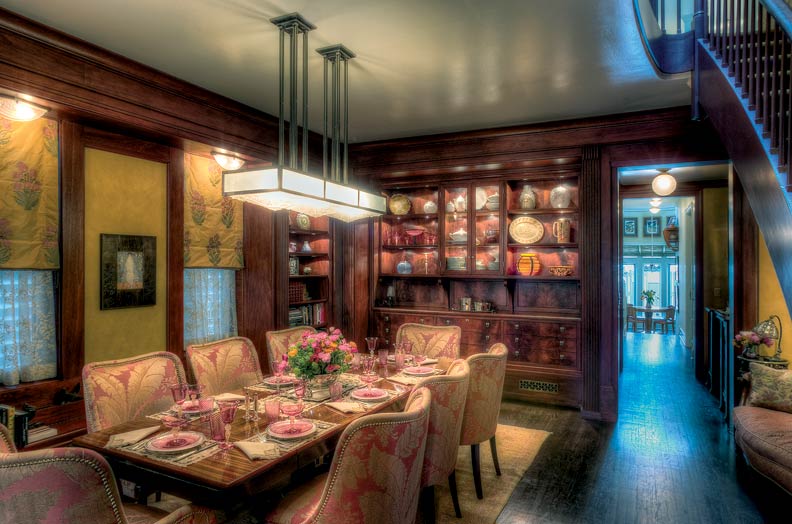 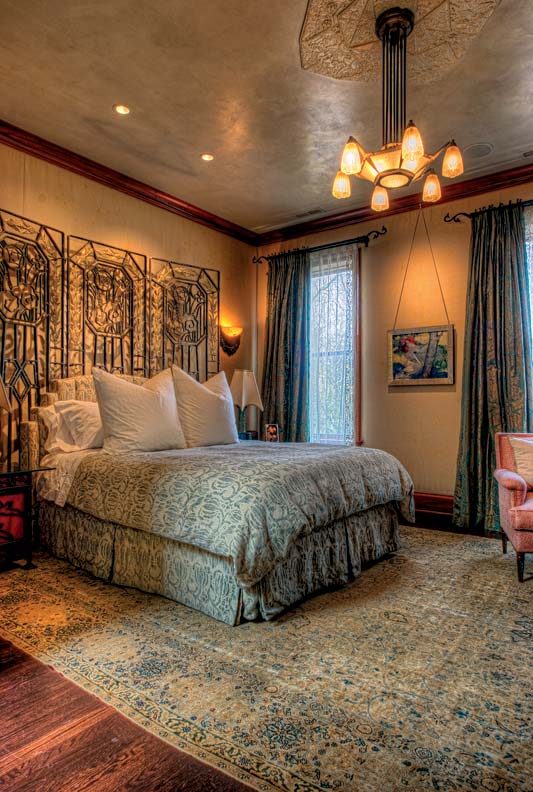 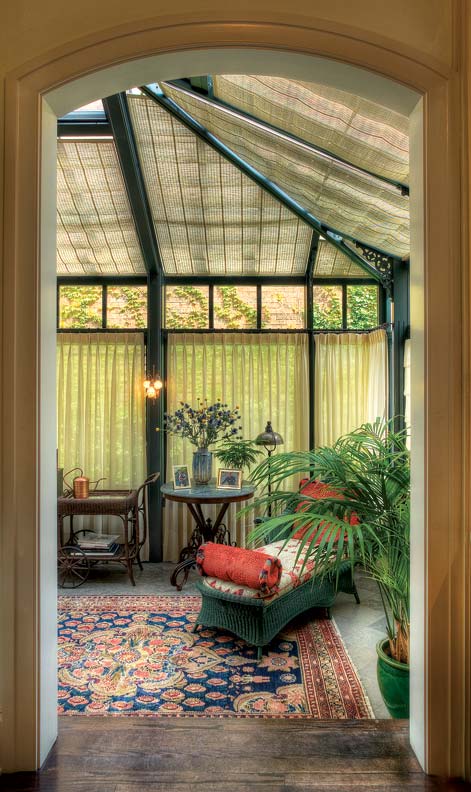 Before committing to the purchase, Clara brought architect Kathryn Quinn to see the place. The two had worked together before (on Clara’s lakeside cottage in Michigan, as well as a previous home renovation in Chicago) and enjoyed a comfortable rapport. “She knew what I liked,” says Clara, “and while this house wasn’t it yet, Kathryn agreed that it had enough bones to become something really great.”

With Kathryn’s help, Clara rethought the organization of each floor. Her two sons’ bedrooms, along with two full baths, would be on the second story, and she would create a master suite on the third. The basement would be finished to house a guest room and office.

On the ground floor, Clara wanted the layout to reflect the building’s turn-of-the-century origins. Based on her familiarity with similar properties, she knew that a period arrangement would require dividing the space into a parlor and dining room, with a vestibule at the entrance. She also wanted to add a half-bath for guests.

At the rear of the house, Clara didn’t mind breaking with tradition. Since the kitchen and breakfast room would have been utility spaces during the house’s early years, closed off from public view, she felt less constrained by period concerns regarding layout. She loved the light, open feel of these rooms and decided to keep the existing floor plan.

The house had two staircases—a formal one at the front and a set of servants’ stairs off the kitchen. The formal staircase was one of the house’s strongest features, ascending in a sinuous curve to an open landing on the second floor. The entire three-story stairwell was illuminated by an elliptical skylight that echoed the arc of the handrail.

The kitchen stairs, however, were another matter. They protruded awkwardly into the room, obstructing precious natural light that streamed in through the soaring windows. To enhance the open feel of the room, Kathryn suggested reconfiguring the stairs and knocking through the north wall at the back of the house to add a conservatory. At the base of the new stairs, in a short passageway between the conservatory and kitchen, she designed a small office area with a built-in desk.

Clara, who makes jewelry, pottery, and textiles, has always had a keen interest in architecture and design. “I love early Art Deco, Art Nouveau, and the transition between them,” she says of the styles she wanted to work in, which are appropriate to the history of her home.

To bring her ideas to life, she worked with Jean Alan, who owns the interior design and custom furnishings business Alan Design Studio. With extensive experience as a set decorator for films, Jean had the requisite eye for detail and the professional savoir faire to honor the house’s period architecture while also expressing Clara’s personal taste.

Rather than researching what sort of transitional interior would be historically authentic and then pinning down particular details, Jean started by asking Clara to show her pictures, books, and turn-of-the-century objects that resonated strongly with her. One, a photo of a bathroom tiled from floor to ceiling in iridescent blue glass, became the inspiration for the new master bath. In many rooms, Jean took her cue from individual objects discovered on trips with Clara to antique stores and architectural salvage shops.

On one of these outings, they picked out several vases and pieces of glassware (“stuff we were madly in love with,” says Jean) that turned out to cost a small fortune. Rather than buying on impulse, they decamped to Jean’s store to mull over possible alternatives.

One idea Jean threw out was a shopping trip to Paris. While admittedly an extravagant-sounding suggestion, Jean knew from previous shopping expeditions that the City of Light could provide a wealth of period furnishings to choose from, at prices low enough to offset the costs of travel. Always up for an adventure, Clara immediately pulled out her calendar to find the earliest date she could leave.

Between Parisian flea markets and antique stores in Italy and the south of France, Clara and Jean found most of the furniture, carpets, dishware, and decorative objects needed to complete the house. Since they were still in the early stages of planning the interior, they were able to integrate their finds fully into the design of each room, using specific pieces as springboards for creative solutions to various challenges.

The parlor and dining room, for instance, were relatively small and dark, particularly after the “bowling alley” had been divided into separate rooms. Since the house immediately to the south stood just a couple feet away, Clara’s home enjoyed natural light only at the front and back. Initially this had posed a serious problem; Clara was worried that the entrance, parlor, and dining room seemed too dark. “Whatever we did, we wouldn’t be able to make those rooms light and bright,” Jean remembers. “So I intentionally worked with that and made use of the drama inherent in the space.”

Jean designed the parlor around an antique Persian Amritsar rug, washing the walls with a multicolored glaze of ochre, orange, and yellow, and upholstering the banquette in amethyst mohair. She used the same colors to create custom shades for the windows. As a result, the room has a warm, elegant glow.

The idea for the built-in banquette was Jean’s. “She had found a photo of a very old room from that period and said, ‘I think we can do this really beautifully,’” remembers Clara. Flanked by a pair of bookcases designed by Kathryn, the banquette provides comfortable seating and display for objets d’art while occupying minimal floor area, lending the parlor a sense of spaciousness well beyond its actual size.

Kathryn designed the millwork throughout the house—doors, trim, and cabinetry for the kitchen and master bath, in addition to the elaborate built-ins and paneling in the parlor and dining room. She also devised the stylized floral motif carved into doors and the arms of the parlor banquette. “Clara and I both take a joy in organic form,” Kathryn says, explaining that she relished the opportunity to explore the aesthetic shift from Art Nouveau to the more stylized floral representations of Art Deco. To “add another layer of working the wood,” Kathryn specified intricate fluting for the pilasters of the dining room paneling, inspired by the ’20s woodwork of Chicago’s Casino Club.

Jean incorporated a variation on Kathryn’s Art Deco floral motif in the nickel and bronze medallion she designed for the centerpiece of the entry room’s mosaic tiled floor. The finished home reflects many such examples of the remarkable collaboration between client, architect, and designer, each of whom gladly took inspiration from elements introduced by the others. “We were so in sync that it’s hard to remember exactly whose ideas were whose,” says Clara. The result of their teamwork? A cohesive period interior that looks perfectly right for its setting.

This house and 17 others are featured in A Home of Her Own, by Nancy R. Hiller with photographs by Kendall Reeves, from the Indiana University Press.

Nancy R. Hiller is a cabinetmaker who has published in numerous period design and woodworking magazines, including American Bungalow, Old House Interiors, and Fine Woodworking.  Hiller's books include A Home of Her Own, Making Things Work, The Hoosier Cabinet in Kitchen History, and English Arts & Crafts Furniture.