Just a few steps away from the edge of the tranquil lake dubbed Glimmerglass by American author James Fenimore Cooper, in his Leatherstocking Tales, sits The Boulders. It was built by a prominent family for their summer camp at Lake Otsego in Cooperstown, New York. The architect was Howard Chapman.

Clad with hemlock planks painted the color of stone, its trim painted forest green, the lodge merges into its woodsy surroundings. The house is ornamented with brackets, flower-filled window boxes, and heavy shutters pierced with arrow cutouts, all of which lend European charm. Its eight rooms center on a great room with a massive fieldstone fireplace. This space opens to a light-filled dining room with its original casement windows. Chestnut wainscots and beamed ceilings remain. Deep porches on both floors take in sweeping views of the lake. Like the famous Adirondack Camps not far from here—though on a smaller scale (the house is 2,830 square feet and sits on just under half an acre)—The Boulders has its own little campus. A separate boathouse with a guest suite above shelters a pontoon boat.

Water is the essential element here; sailboats and canoes silently glide past on the lake’s mirrored surface. The pristine village of Cooperstown, with its sublime natural beauty and patches of unspoiled forest wilderness, was founded by Fenimore Cooper’s father, William, a storekeeper turned successful frontier developer. William Cooper left New Jersey in 1786 to develop this small town of quaint houses, offering properties for sale to land-hungry farmers from New England. The village soon thrived as a resort, as summer cottages and inns were added to cater to wealthy socialites, who found it a welcome haven from urban centers including New York City, Chicago, and even cities of the Deep South.

The Boulders remained in the original family until it was purchased by the Margaritis family, 20 years ago. Barbara Margaritis and her husband were of retirement age, but Barbara did not intend to stop working. Having built or redesigned houses on Long Island, she took on the neglected lodge as her next project.

Guided by her love of historical details and appreciation of fine craftsmanship, Barbara gutted the ugly remodeling of the kitchen that had been done in the 1970s, ridding the space of a dropped ceiling and contiguous Formica countertops. She removed a stainless-steel sink and replaced it with an apron-front farmhouse sink, accompanied by a marble backsplash. Three separate rolling teak cabinets, set on either side of the sink and a dishwasher, replaced the laminate countertops. Designed by Barbara and custom built by her son, the cabinets on wheels are both utilitarian and attractive. They provide storage space and display area for a collection of Arts & Crafts pottery.

The kitchen is now much closer to original intention. This room was always intended as a service space, unfussy in its plain utility, yet it is attractive owing to the rich wood paneling that’s original to the house. It survived unscathed. The plan now follows the simple arrangement set forth in the 1915 era, with a big worktable set in the center of the room under a pendant light fixture, and the tall storage cabinet still in place. To brighten the room, Barbara stitched cheery butterscotch-yellow plaid curtains of silk taffeta for the three windows that line one wall, and she added colorful patterned rugs on top of the hardwood floor.

Off the kitchen, through swinging doors, is the well-preserved butler’s pantry. It boasts immense floor-to-ceiling cabinets and cupboards of heart pine, finished to show off the natural beauty of the honeyed wood. China is stored behind glass, while appliances and supplies are kept hidden in cupboards below. Finishing touches include brass cup pulls on the drawers, which are an integral part of the cabinet design, as are the latches. Barbara restored the nickel countertop that surrounds a porcelain sink: Old butler’s pantries often had sinks and surfaces made of softer metals, such as nickel or copper, to provide somewhat of a cushion for washing delicate china. 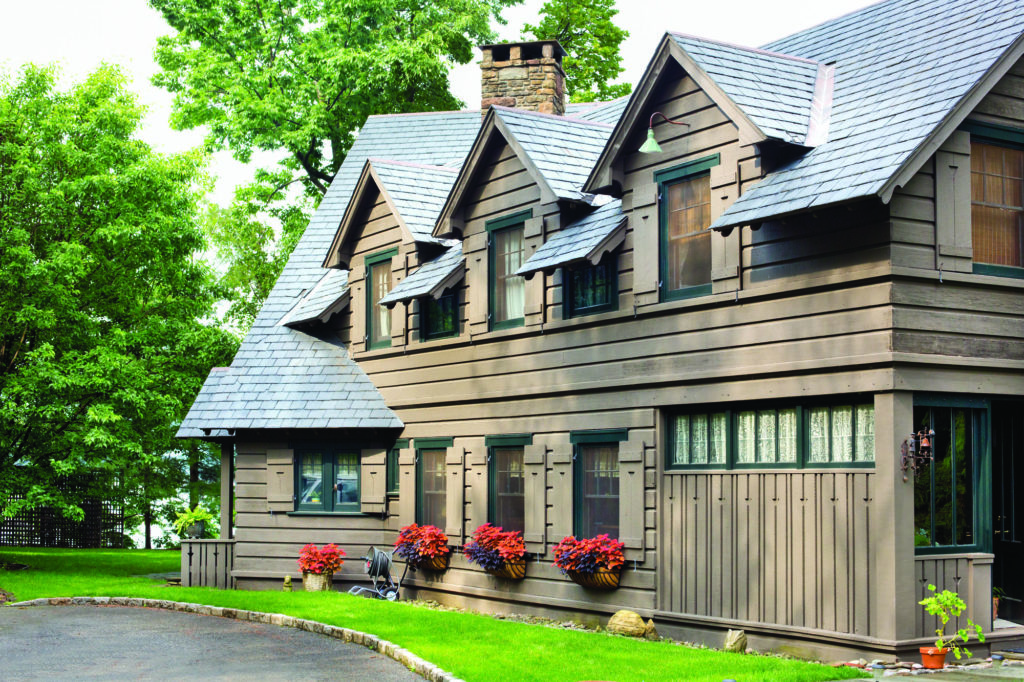 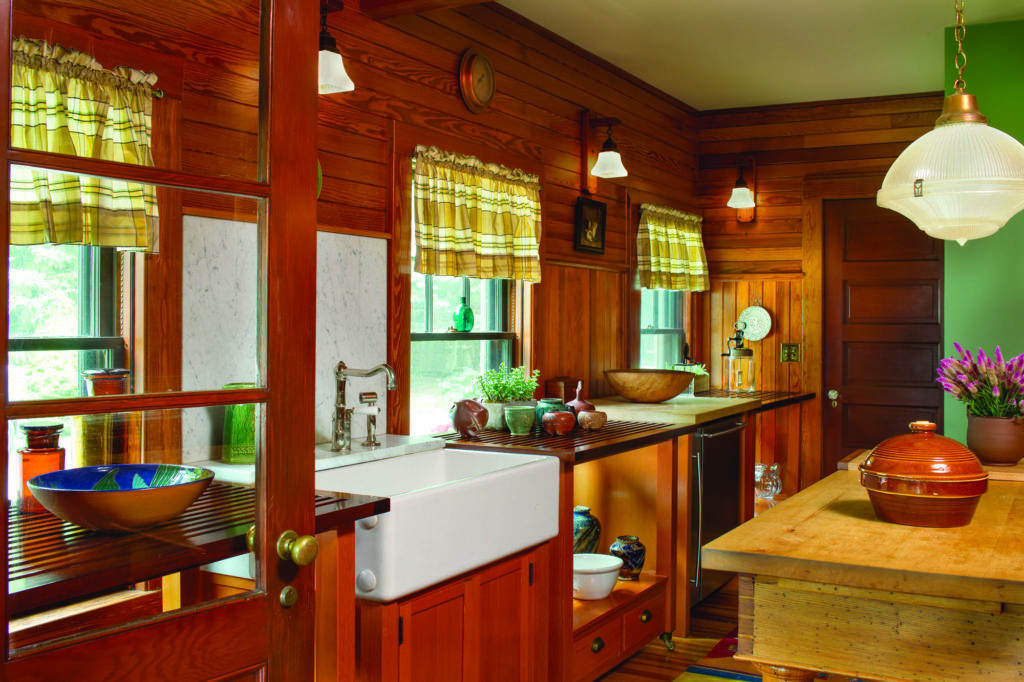 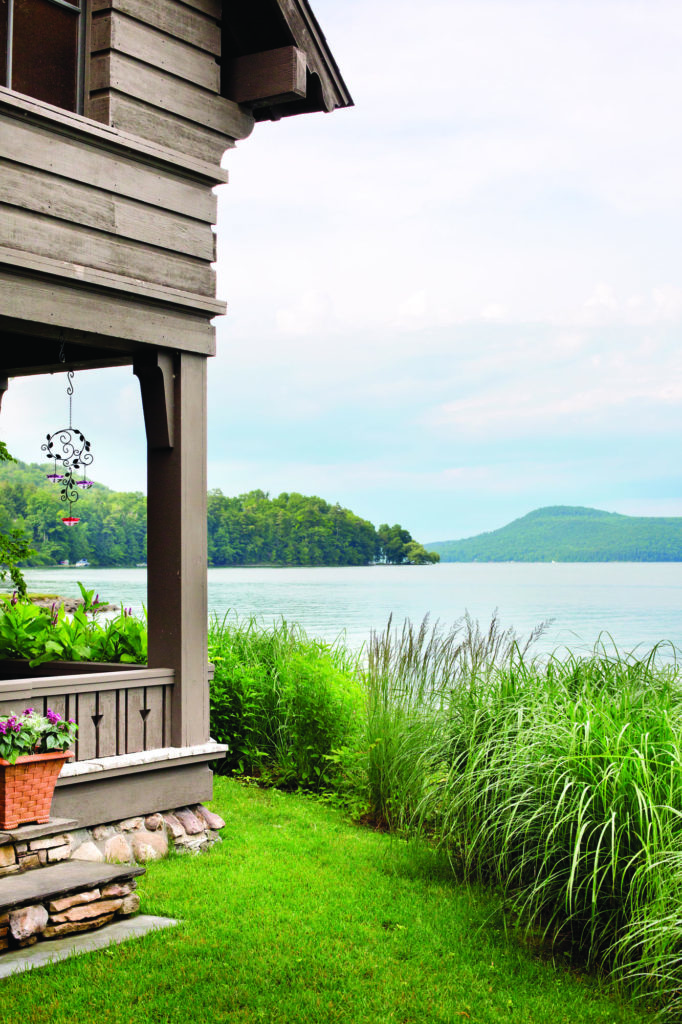 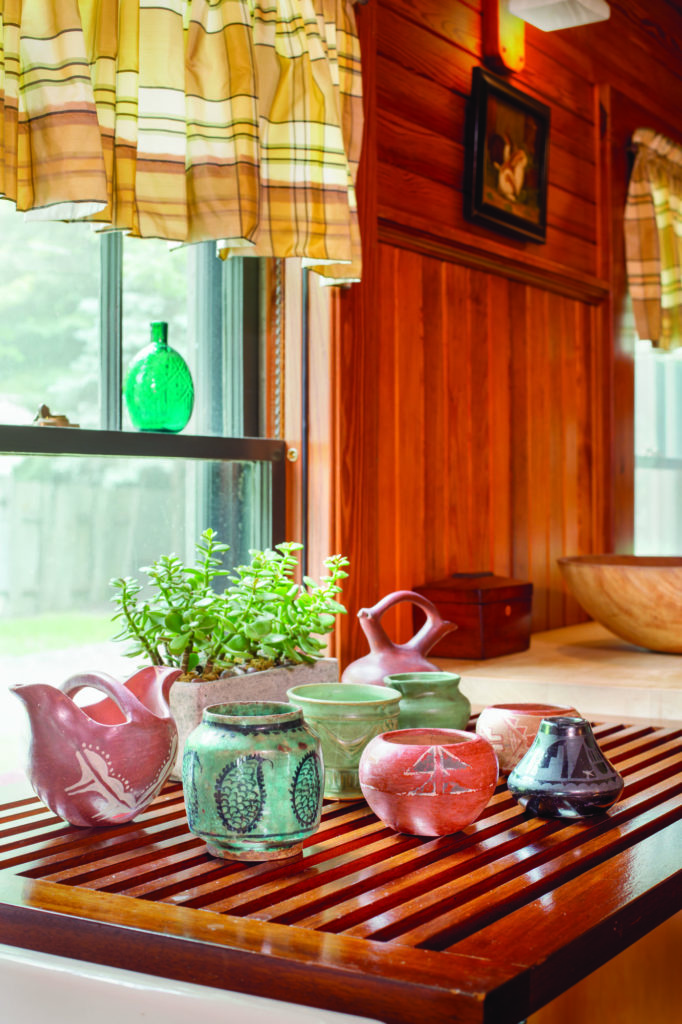 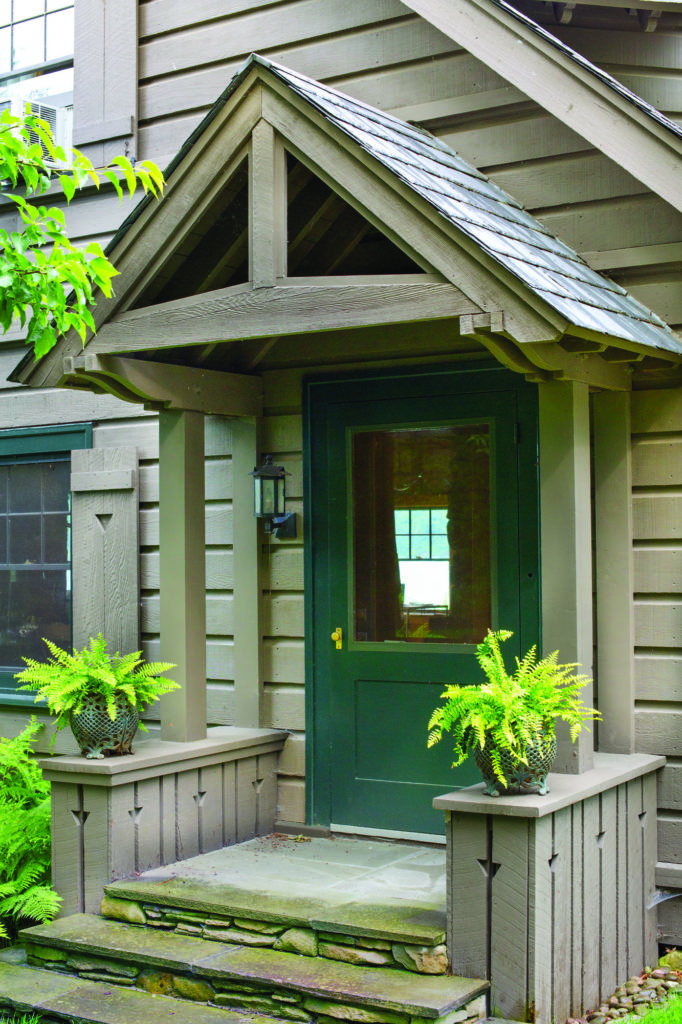 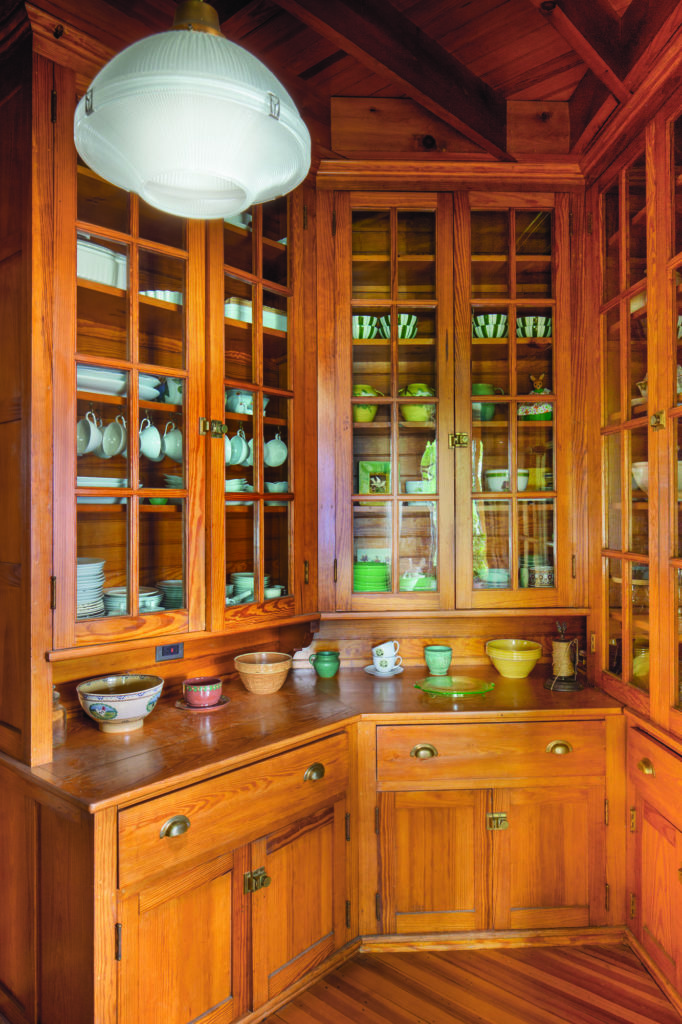 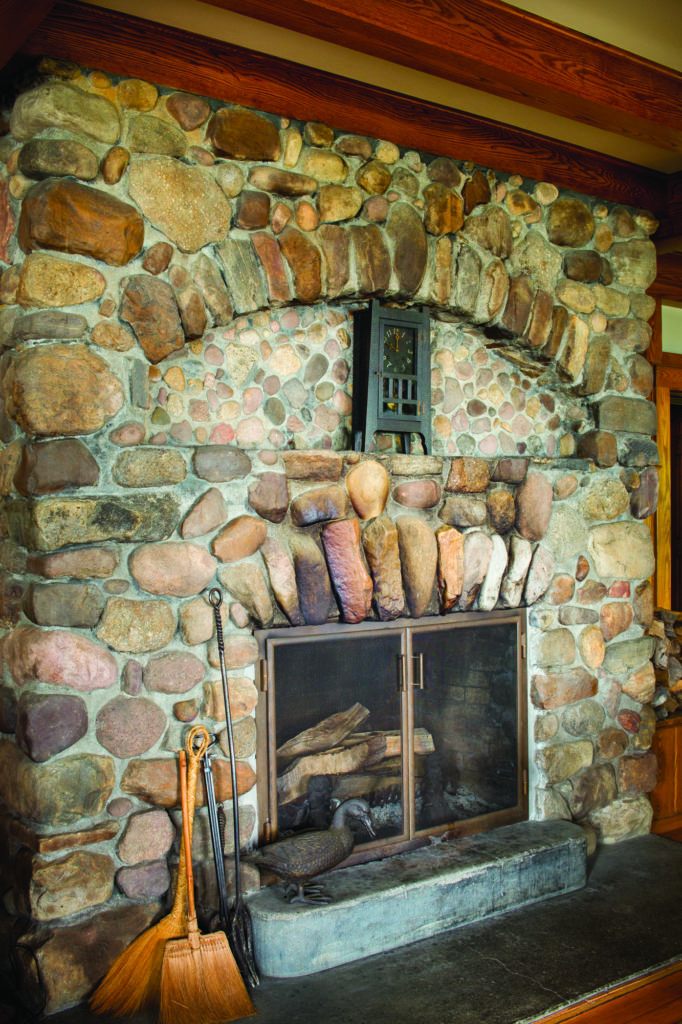 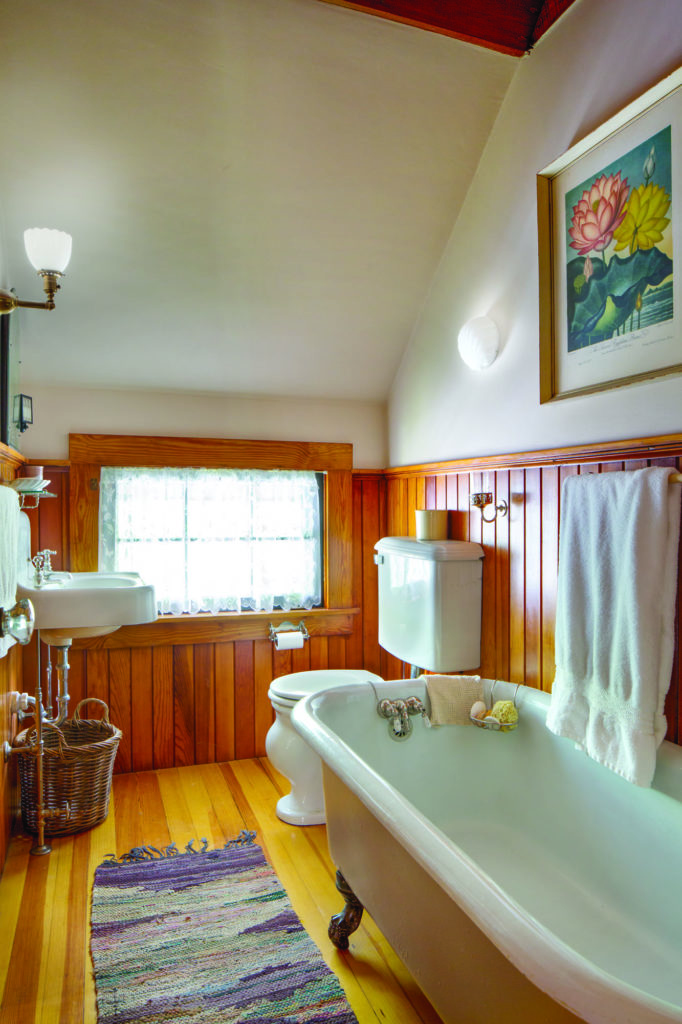 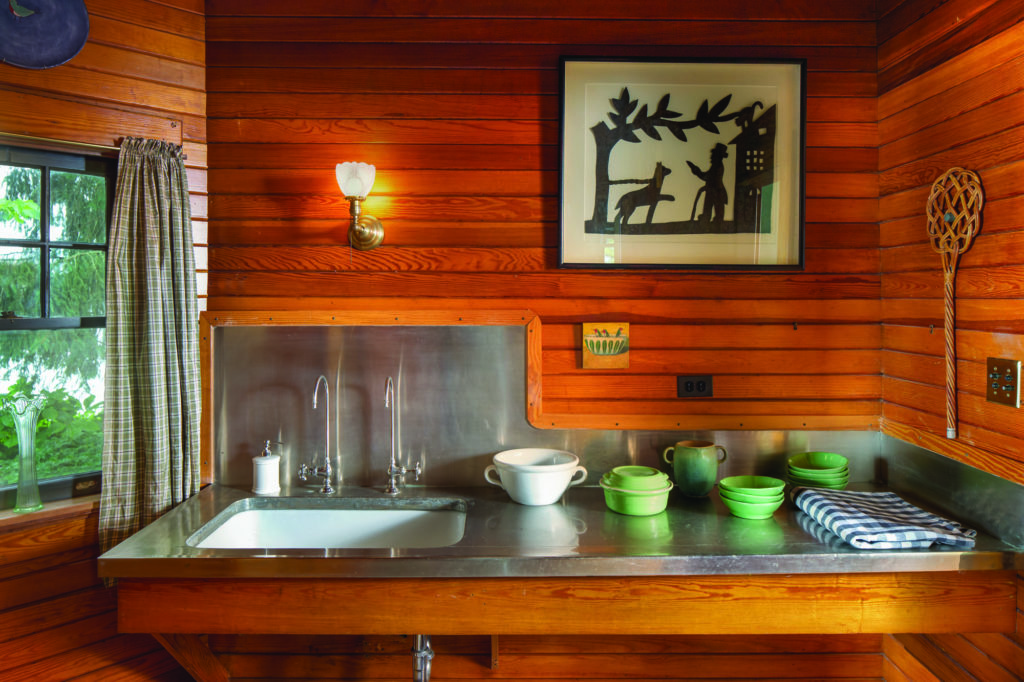 Leading into the kitchen is an entry hall that the former owners had turned into a screened porch. Because the house has its original porches, Barbara opted to enclose the room with beadboard-clad walls. She added lace-curtained windows and and now uses the space as a mudroom. A huge stone laundry sink is perfect for gardening purposes, and open shelves store odds and ends.

With its historic integrity and charming comforts preserved, The Boulders is one of just a handful of old-time lodges left along the shores of the fabled lake once called Glimmerglass.