The property was ideal: an expansive 13 acres just outside the tiny town of Scappoose, Oregon, with views of the Columbia River Gorge, Mt. Hood, and Mt. St. Helens. House-hunting in Scappoose on a tip from a co-worker, Bruce and Eileen Drake hoped to find the perfect place for Bruce to indulge his hobby of restoring vintage boats. With a large horse barn still standing, this former farm fit the bill—but its 1927 homestead left a lot to be desired.

“It had been remodeled about 10 years earlier, and it wasn’t very well done,” says Eileen. “They had tried to Craftsman-ize it with really inferior materials.” The remuddles included an expanded kitchen crowded with a bevy of columns, poorly constructed built-ins flanking the fireplace, and a master bathroom that was completely open to the bedroom beyond.

But all Bruce and Eileen could see was an enticing challenge. “Even though most of the original features were gone, the house still had enough character to fit our style,” says Eileen. “We felt like we could take it in more of a Craftsman direction without violating the spirit of the house.” 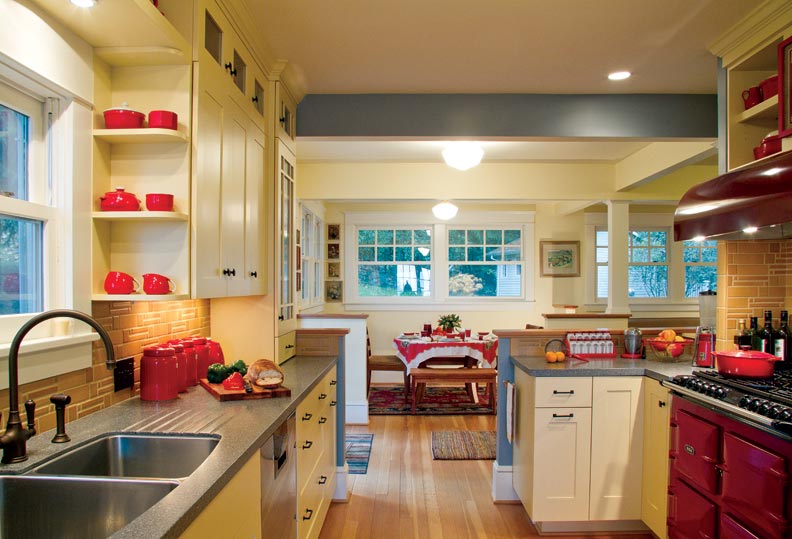 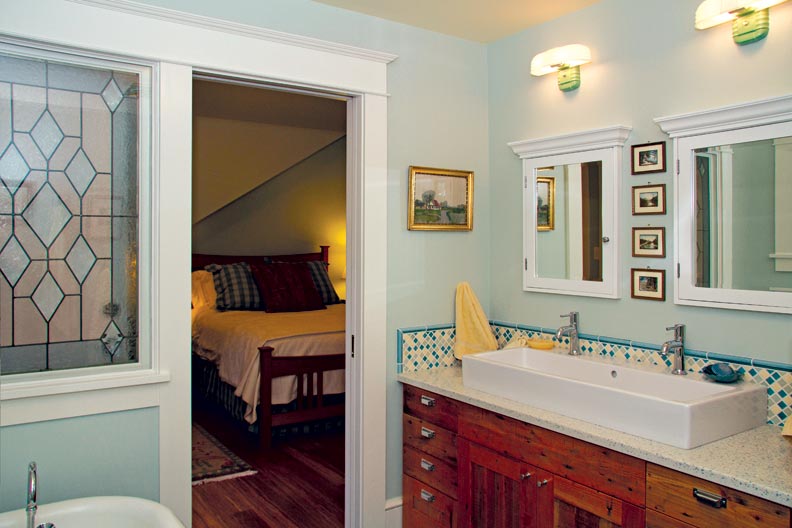 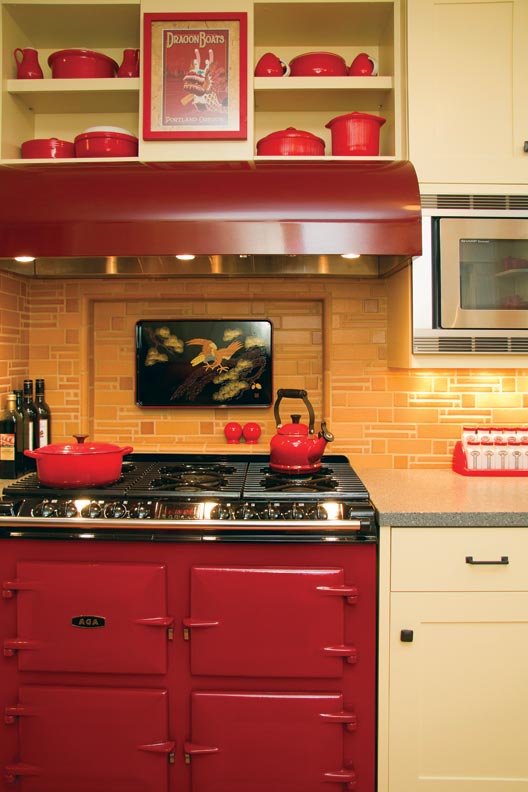 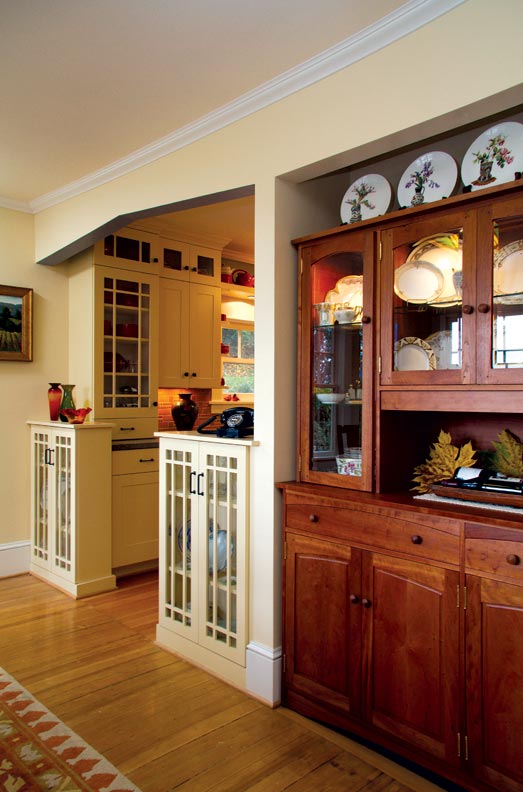 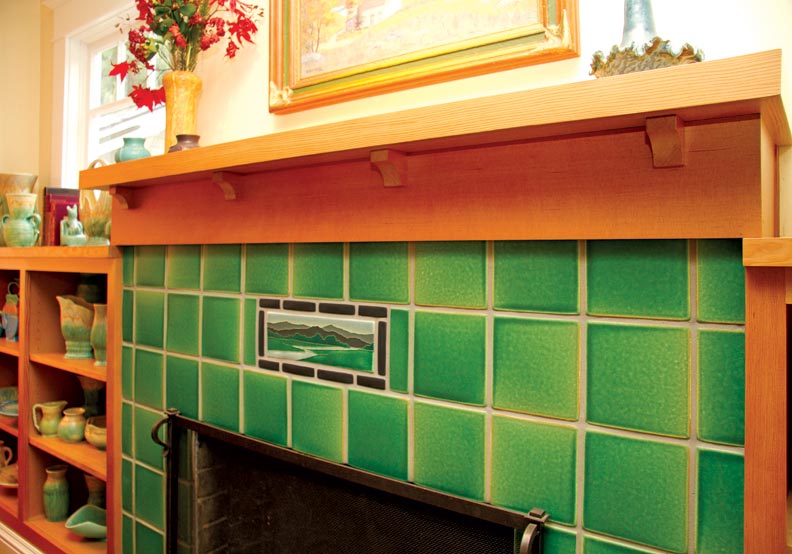 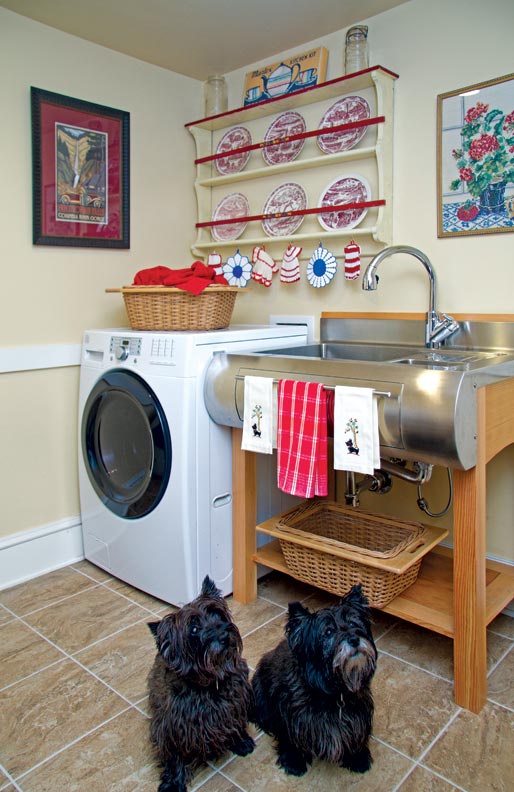 In addition to restoring Arts & Crafts details, Bruce and Eileen also hoped to add some energy-saving 21st-century touches, just as they’d done with the Arts & Crafts home they’d restored in Portland in 2002. That project had been successfully helmed by designer Karen Richmond of the Portland-based remodeling firm Neil Kelly, so Bruce and Eileen knew she’d be the perfect person to help them transform this house as well.

The first order of business was removing the shoddy workmanship of the most recent remodel. An inspection of the kitchen revealed that only one of the room’s nine columns was actually structural. “No one had ever done an appropriate structural assessment of where the support beams were,” says Bruce. They left two of the columns in place (replacing a beam to ensure proper support) to create matching colonnades that form a hallway between the kitchen and the breakfast nook. On the opposite side of the kitchen, the passage leading to the dining room was updated with built-in cabinets and an arch overhead that mirrors the one on the adjacent wall.

Inferior new work was likewise dismantled in the living room, where bookcases had been built out of paint-grade lumber around a fireplace covered in cheap terra-cotta tile—a setup that was technically correct for the house’s time period, but severely lacking in quality. “They had really done an amateurish job with the fireplace tiling,” Eileen says.

The new, more era-appropriate design was inspired by a Motawi accent tile Bruce and Eileen found, which depicts a landscape reminiscent of the one outside their front door. Green Motawi field tiles round out the fireplace surround; the mantel and built-ins were constructed from salvaged fir left over from projects at Bruce and Eileen’s previous house.

In the master bathroom, adding privacy was paramount. The new design came together after Bruce and Eileen scored a large stained-glass window at Rejuvenation’s Portland salvage store, which Karen used to fill in the half wall between the bedroom and bathroom. “Allowing some light to still flow between those two rooms was really appealing,” she says. She designed a pocket door to further close off the bathroom, and warmed up the design with a vanity custom-made out of wood salvaged from an old barn and tiles that complement the colors in the stained-glass window.

Karen also overhauled the basement laundry room, which was dark, dingy, and structurally deficient. “There was only 17″ between the wall and where the washer and dryer were—you could barely get through the space,” says Bruce. “The floor was like a roller coaster,” adds Eileen. “Concrete had been poured over the original dirt floor with no leveling done.”

Karen replaced the entire floor, covering it with tile, and divided the space into two distinct areas: a laundry room and a mudroom for the couple’s three dogs.

In addition to fixing past remuddles, Bruce and Eileen also wanted the design to highlight their prized pottery collections. In the kitchen, Karen topped the show-stopping red AGA range with a custom hood and open shelves to hold Eileen’s red Hall pottery. The finished result was a collaboration between the designer and the home-owners: “We told Karen we had this big red range, and she built the kitchen around it,” says Eileen. “It doesn’t dominate the room, but it clearly grabs your attention.”

The range’s placement made venting a bit of a challenge, however: “We thought we had a plan intact, but as we got into the project, it didn’t quite work out,” Karen says. Instead of venting directly through the roof above the stove, they ended up running ductwork along the ceiling beam that blocked access, placing the vent above the breakfast nook.

The living and dining rooms also became showcases for Bruce and Eileen’s pottery. The new fir bookshelves in the living room hold the couple’s 1930s English Beswick pottery. In the dining room, Karen removed a cheaply constructed, recently added built-in cabinet and enlarged its alcove to make room for Bruce and Eileen’s Shaker-style cherry hutch, which holds their collection of Arts & Crafts painted plates from the 1910s and ’20s.

Even as they turned back the clock on the house’s design details, Bruce and Eileen made sure its internal systems were up to date. Following a home energy audit, they tightened up the house with foam sealant and additional insulation. They also upgraded to a more efficient furnace and water heater, and switched to low-flow toilets. They left the original windows intact, however. “We don’t believe in ripping out old windows just because they’re single-pane,” says Eileen.

While the Drakes were respectful of the house’s age, the lack of original material allowed them to take the authenticity only so far—which suited them just fine. “Our previous house had enough original details that we could do a historically accurate restoration, so we ended up living in a very friendly small museum for about 10 years,” Eileen explains. “Here, we had a chance to do something that fit the character of house, but gave us a cheerful, less formal space. It’s a very easy house to live in—when you come home, you always feel good walking in the door.”