Honesty of construction and simplicity of design, an emphasis on the beauty and power of nature—the basic tenets of the Arts & Crafts movement have a universal appeal. And so it was perfectly natural that when these homeowners found a 1937 brick Tudor perched on a steep Seattle hillside, they didn’t hesitate to imbue it with an Arts & Crafts aesthetic to complement its open layout and timeless design.

The home had had just three previous owners and was remarkably intact. Broad west-facing windows let light flood into the rooms even on the grayest of Pacific Northwest days, with breathtaking views of Puget Sound and spectacular sunsets over the Olympic Mountains beyond. Attractive original details survived, including leaded-glass windows, warm mahogany trim, a handsome Batchelder tile fireplace in the living room, and even the original laundry chute in the upstairs hall. The large lot would allow the homeowners, both avid gardeners, enough room for both sunny Mediterranean and peaceful shade gardens, something they had always yearned for. All the house needed, they thought, would be paint and a few straightforward, cosmetic updates. But, as they would find out after moving in, they were sorely mistaken. 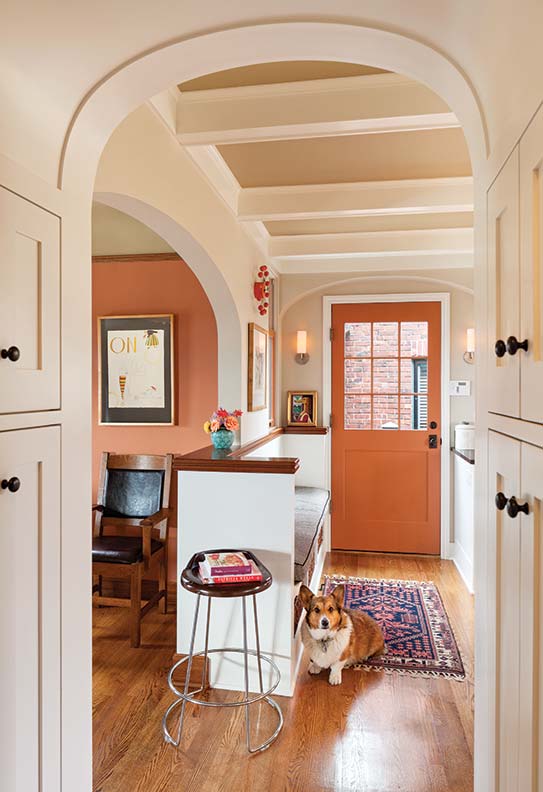 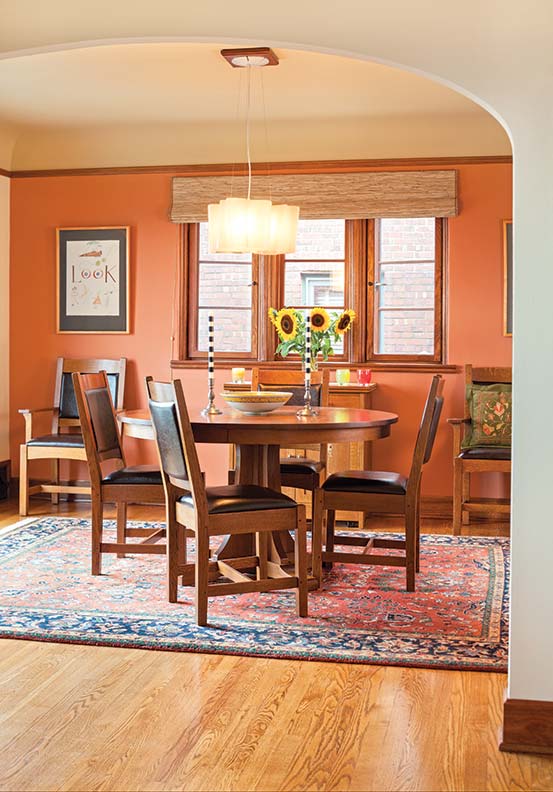 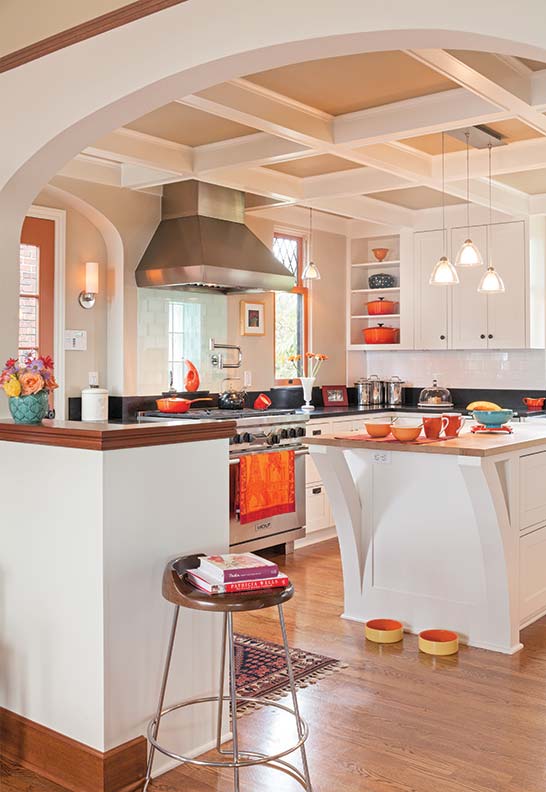 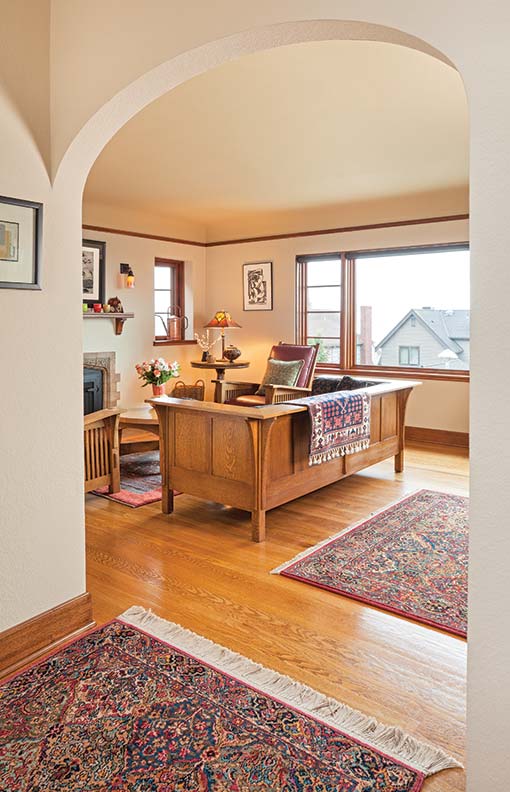 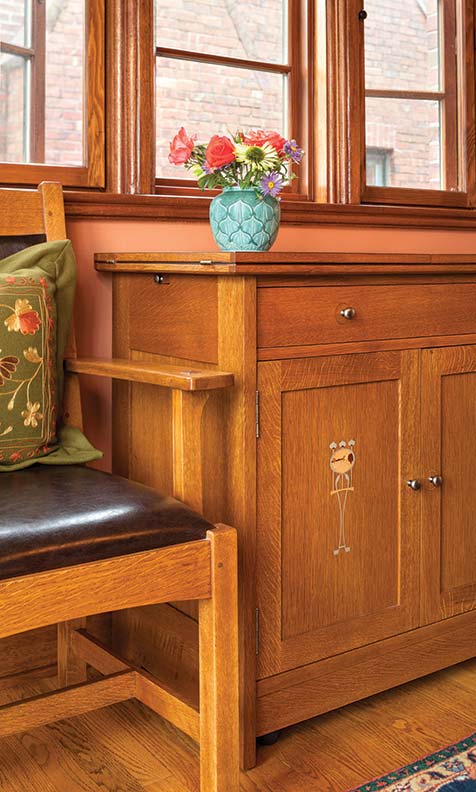 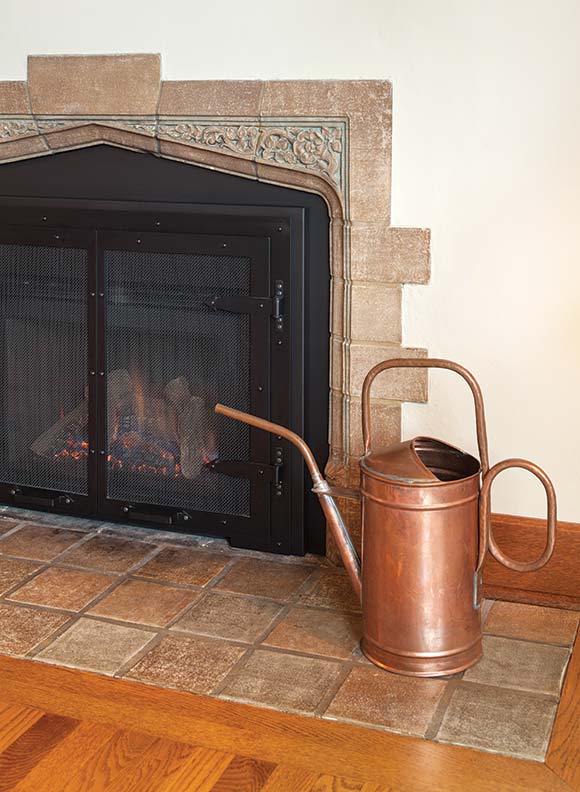 The bathrooms needed updating, and the kitchen needed some TLC: It had charming cabinets, but there was no counter space, and it was dark and cramped, separated from the adjoining light-filled dining room by an oversized china hutch that had to go. The real horror story turned out to be more serious, they discovered during their first winter. The previous owners had installed a hot tub on the rear deck, and in the process had completely blocked all of the exterior drains, causing storm water to back up and flood the basement during every rainstorm. The basement became unusable, contaminated with perpetual mold, mildew, and odor. Plus, windows throughout the house were rotten and so poorly sealed that five-foot jets of rainwater would regularly spray across the living room during gusty winter storms.

At first the couple thought they could approach the restoration slowly, tackling one room at a time as their budget and schedules allowed. But once they realized the extent of repairs that were needed just to make the house livable, they decided to bite the bullet and restore it all at once. They wanted a place to live within a reasonable amount of time. Happily, they were able to complete the entire project in just under a year.

The water incursion was corrected with French drains; heating and electrical systems were updated. Inside, they started at the top. They gutted the main bath upstairs, putting in a shed dormer to add space for a jetted soaking tub, shower, and double sinks. Heated limestone floors were a wise indulgence. Painted woodwork throughout the house was stripped, refinished, and replaced as needed to match original mahogany trim, and rotted windows were updated with energy-efficient replacements. All of the brickwork was repointed, inside and out. The original Batchelder tiles surrounding the living room fireplace were cleaned, and the firebox got an efficient insert, eliminating smoke. Original fittings were recycled wherever possible; the old kitchen sink and faucets were relocated to the utility room, and the old kitchen cabinets were reused in the laundry room.

Because both homeowners are ardent cooks, they decided to enlarge the kitchen. Leaking French doors were replaced with a period-appropriate but weather-efficient six-light back door, and the overbearing china hutch that blocked the kitchen from the dining room was removed, opening the room to views of Puget Sound. The entire kitchen was extended out six feet across the front of the house, allowing more cabinet and counter space. A box-beam ceiling added more Arts & Crafts sensibility. Craftsman Tudor detailing was repeated on the butcher-block-topped center island, and a short passageway between the foyer and kitchen became a small pantry with floor-to-ceiling cabinets. Here the new arched ceiling repeats the arched openings familiar in many early 20th-century houses, especially Tudor Revivals. The classic black and white color scheme in the kitchen is enlivened by the couple’s collection of colorful serving ware, some of it mid-century.

The Arts & Crafts appeal continues in carefully selected colors and furnishings. A soft, pleasing palette of C2 Paint’s warm beige Hush, accented by cool white Frostine in the kitchen and almond-colored Frappe in the stairwell, made just the right backdrop for the rich tones of reproduction Stickley oak furniture. The living room has a Prairie settle flanked by a pair of Morris Spindle chairs, while a Mission Round pedestal table sits in the dining room, along with comfortable Cottage leather-back armchairs and side chairs. A handsome Harvey Ellis Mobile Server beneath the windows helps anchor and balance the room, which was enriched with the vibrant pomegranate tones of Firenze on the southern wall.

A combination of sensitive yet modern updates, design tweaks inspired by the Arts & Crafts movement, and appropriate furnishings has given this modest brick Tudor livability with style.