In a tale of adaptation and evolution, our central characters are Bob and Carol LeBeau, Massachusetts transplants who moved to coastal Maine in the 1980s. They had to adapt as they looked for the perfect plot of land and built their dream house. Ever since, their tastes as collectors have continued to evolve. “We live with and use everything,” Bob says, as the couple’s grandson runs freely around a house filled with antiques.

“We built the house in 1984,” Bob recounts. “We wanted to reproduce an antique gambrel. We salvaged the posts and beams from a 250-year-old timber frame barn and planned for that in the design, incorporating the structural elements—they span the entire width of the house.” The residence includes the house and a garage arranged on a single axis; these are separated by a one-story breakfast room that steps back, as if the house had a wing.

The LeBeau family’s efforts went on long after 1984, for they’ve continued to experiment and improve the interior and landscape. “It was a learning process,” Bob says. “When we moved in, we wallpapered, but eventually decided to strip the paper and stencil the walls.” Now almost every room includes decorative painting. But the treatments, too, evolved. “When we first stenciled, it was too bright, so we went back and glazed the walls over the stenciling with a wash to give it ‘age’.” Bob also painted geometric stenciled designs on the floors. Carol and Bob then commissioned local artist Tony Castro to paint the stairwell walls in the manner of the old itinerant painters, such as Rufus Porter and Moses Eaton. 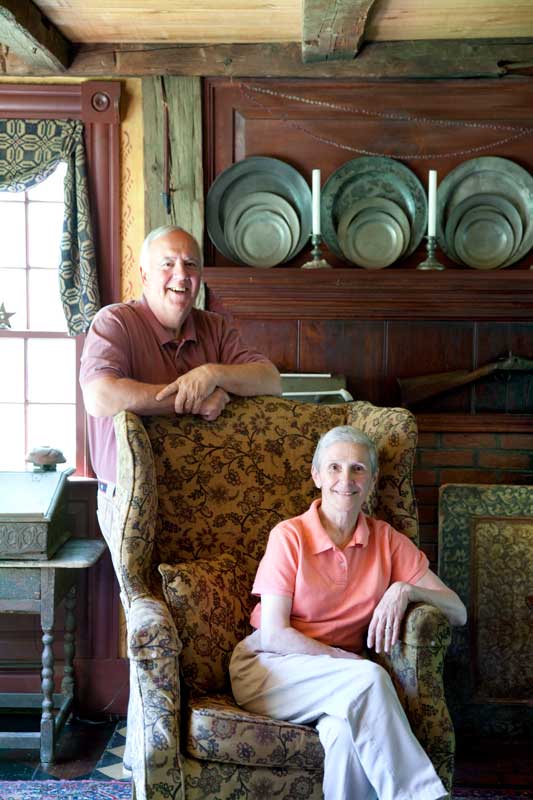 The three-bedroom, one-and-a-half-bath house is home to inveterate collectors. Stoneware, spongeware, and redware fill shelves, and pewter is artfully displayed. As with their embrace of decorated walls, the LeBeaus came to their appreciation of painted furniture over a period of time. “When we moved in, we furnished in Ethan Allen pine,” Bob admits. “As we went antiquing, we started by collecting refinished pine pieces. We spent our weekends going to shows and auctions, and as we gained more knowledge, we began to appreciate the original, early paint on the better pieces, so that’s what we began to focus on.”

Prominently featured in the couple’s collection are three tall-case clocks. “Two are from Connecticut, and the third is from Ireland—that one has wooden works.” The couple’s favorite pieces are a blanket chest with a false upper drawer in the dining room, and a six-drawer chest in the master bedroom, both with their early finishes. Antique chairs, cabinets, and tables have been carefully chosen to create the historical interior.

The LeBeaus labored to ensure that modern systems are unobtrusive; they concealed electrical outlets wherever possible and selected lighting fixtures that could be electrified with minimal impact. “In fact,” Bob says, “the dining-room ceiling doesn’t have electricity; we just use candles!” In the design of their kitchen, the couple chose to downplay the presence of appliances and concealed the refrigerator. The black range, from a restaurant supplier, blends seamlessly in its fair impersonation of a 19th-century cook-stove, complementing the simple cabinets.

Just recently, the LeBeaus purchased an 18th-century paneled wall and fireplace surround with old paint, and will install it as the central focus of their parlor. Care has been taken so that the old work won’t need modification.

Outside, the grounds and gardens are the result of years of painstaking work. The sprawling back yard is framed by stone walls, which the LeBeaus built themselves. “Whenever we had some free time, we’d go out and build a section,” Bob says. The couple also created a pleasing array of beds in the yard, along with a vegetable garden surrounded by a picket fence to deter wildlife.

Even though their home is furnished with an abundance of antiques, Bob and Carol refuse to be held prisoner by them. “We live with and use everything,” Bob says, as the couple’s grandson runs freely around the house. Although they don’t see themselves as Luddites, the LeBeaus “don’t have a computer, cell phone, or fax machine . . . we don’t need them. The television is hidden in a cabinet,” Bob says. “But we do buy candles by the gross!”