The stupefying house beckoned like a fairytale castle of towers, spires, and terra-cotta ornament. The French Renaissance-style mansion sat in its own two-acre park in the heart of St. Louis. A for sale sign stood in front.

Shelley Donaho, who’d restored a handsome Victorian just half a block away, couldn’t resist taking a peek. It was like stepping back in time, because nothing had changed for more than 80 years. The house was built in 1908 for Charles Stockstrom, owner of the Quick Meal Stove Company, later renamed Magic Chef and one of the largest stove makers in the world.

After Stockstrom died in 1935, at age 83, his daughter Adda Ohmeyer lived here until her death in 1990, at age 94. Dedicated to preserving her father’s memory, she had diligently kept everything as it was. Shelley Donaho marveled at gleaming oak woodwork, hand-painted friezes, original chandeliers, leaded- and stained-glass windows, brass doorknobs, even the original cast-iron sink in the kitchen. From the elegant French receiving room to the basement bowling alley, the 30 rooms filled Shelley’s imagination. All the house needed, she thought, was a good cleaning.

That was 1990, and Shelley is now 29 years into the three-year restoration she so methodically had planned. The hard work started outside, with terra cotta dirty from decades of coal heat, and brick that needed repointing. Valley flashings had failed and the red-slate roof was leaking; someone had stolen all the copper downspouts. Inside, original plumbing was no longer working in many rooms; leaks had damaged the second-floor bath and a parlor below. Wiring, too, was original and unsafe, and there was no air conditioning. The staircase ceiling had buckled, and the yard, unmaintained for decades, was overgrown. Still, the masonry house was solid and sound.

Once the roof and flashings were restored, pointing the brick took four months, and then the exterior was acid washed. Asbestos pipe insulation was removed and copper plumbing installed; four new boilers replaced the original massive coal and oil boiler. The addition of geothermal heating is more recent. Electrical systems were updated and air conditioning added. The original windows—built of old-growth timber—were stripped and reglazed, and exterior storm panels were added for efficiency and protection.

Terra-cotta balustrades on the balconies had failed. Local craftsmen disassembled them, carefully numbering each piece, then recast missing pieces that are indistinguishable from the originals. More than 30 dead trees were removed and 150 new trees added in work that brought back the property’s park-like ambiance. The handsome old carriage house got a new slate roof. 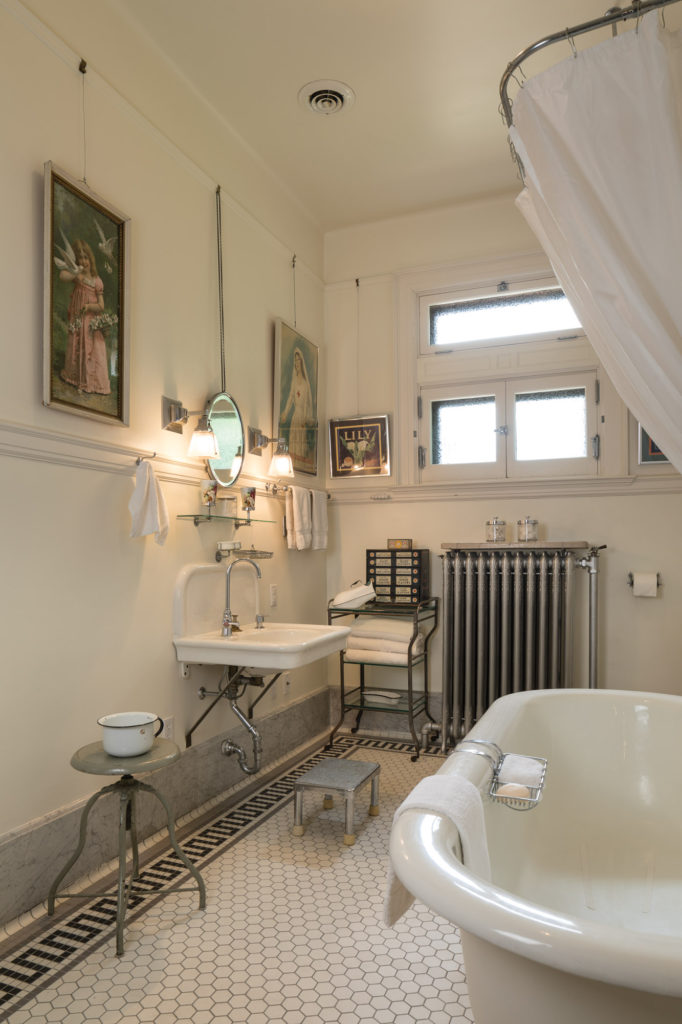 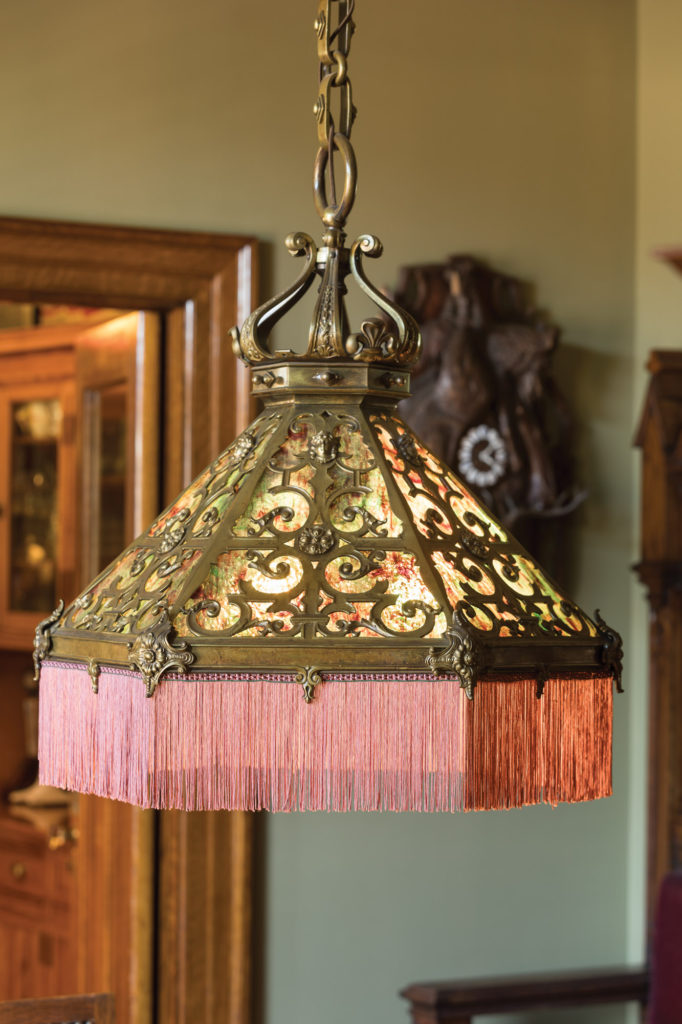 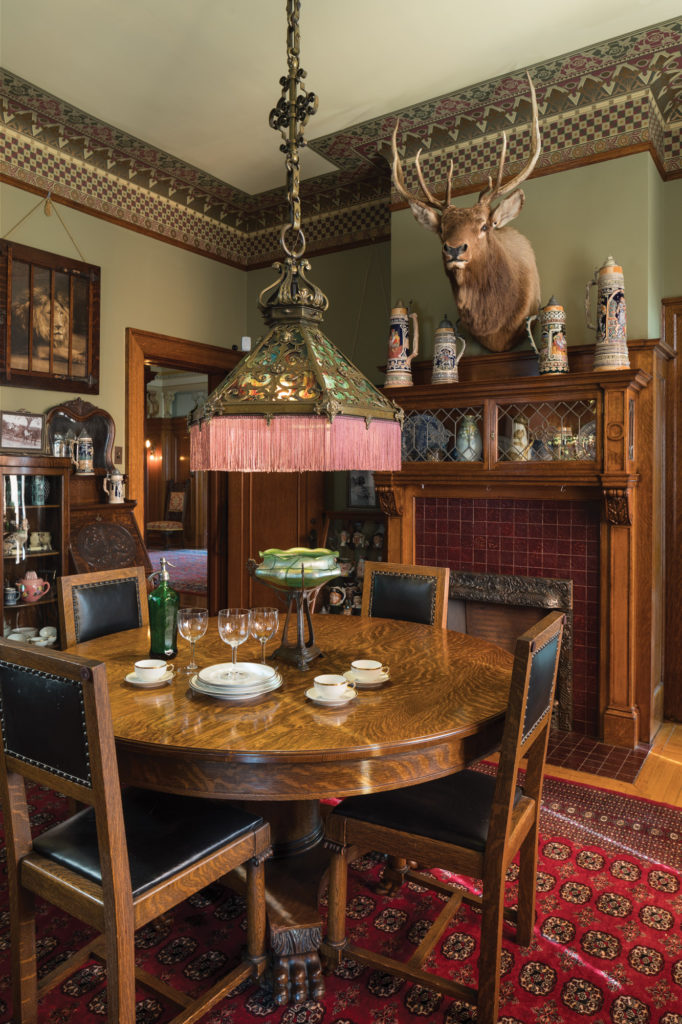 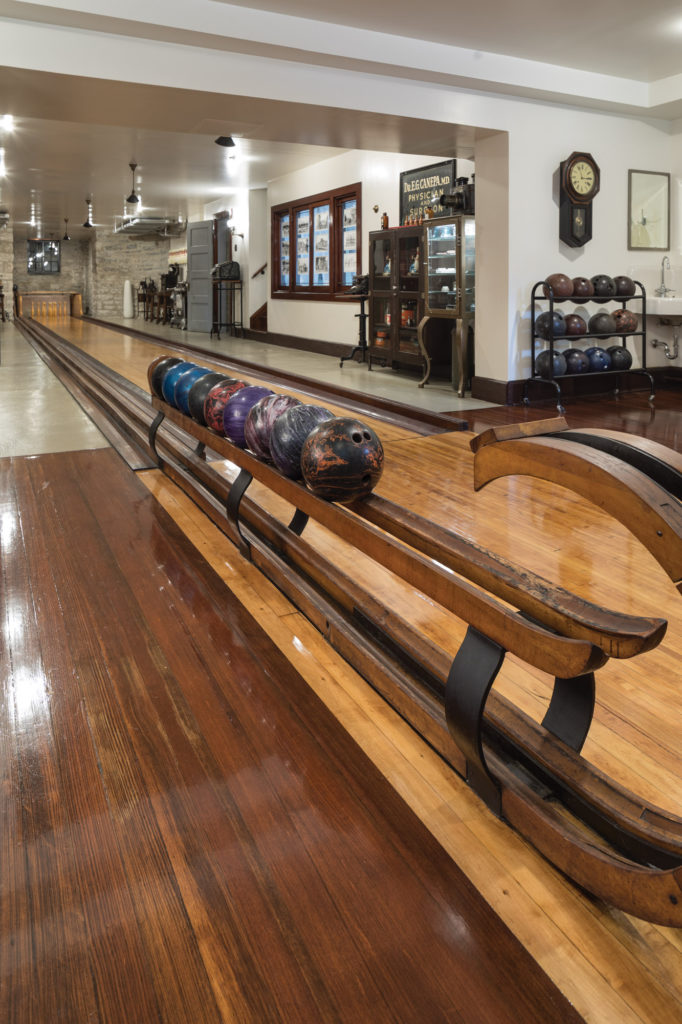 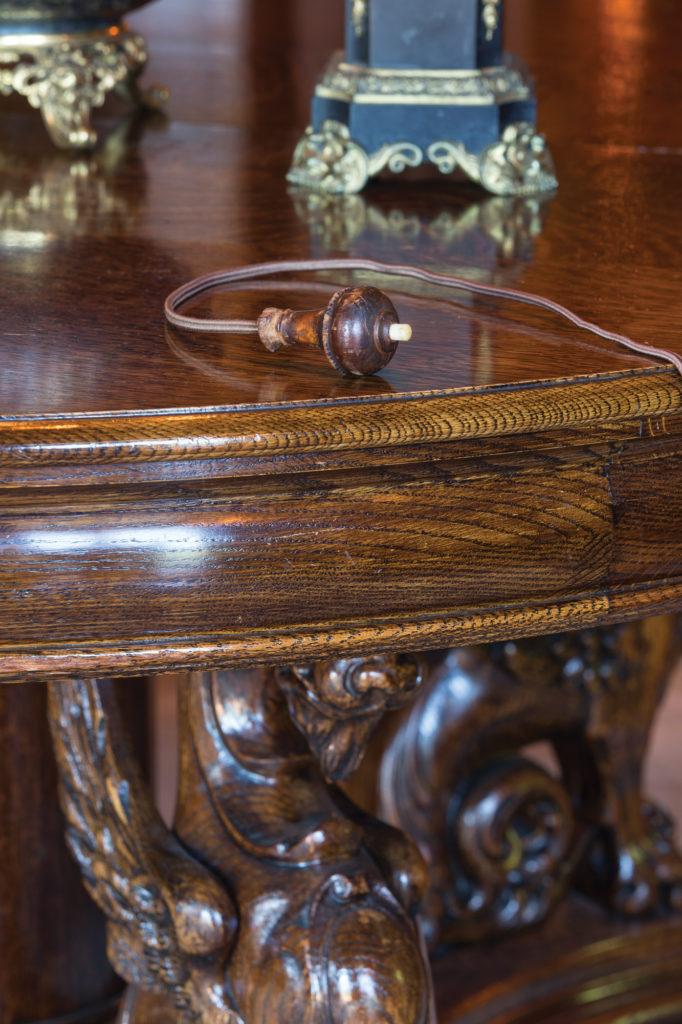 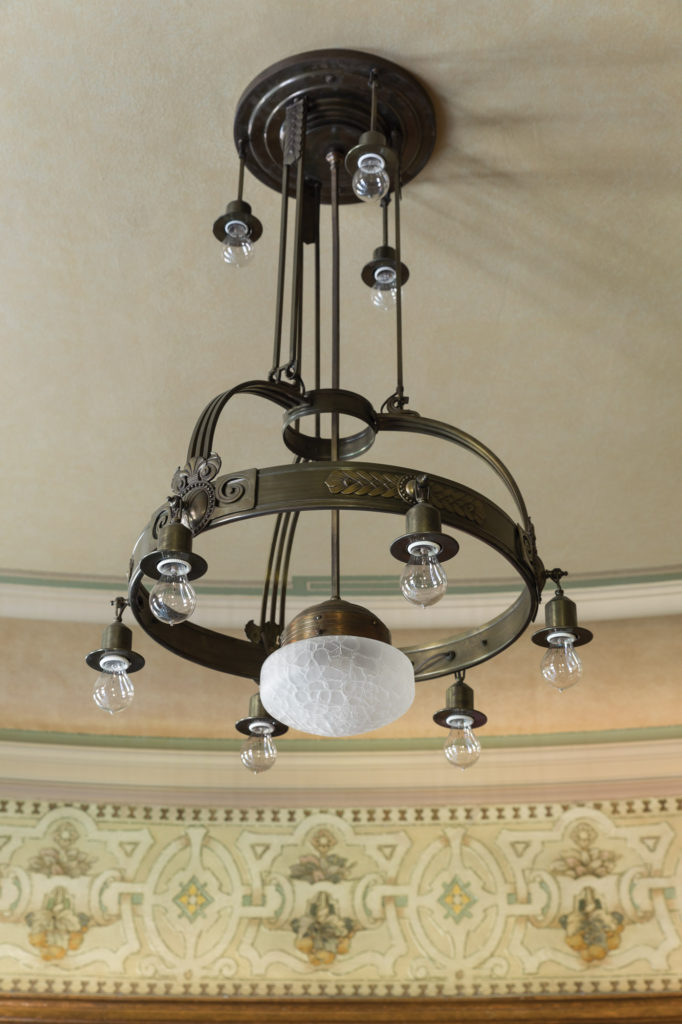 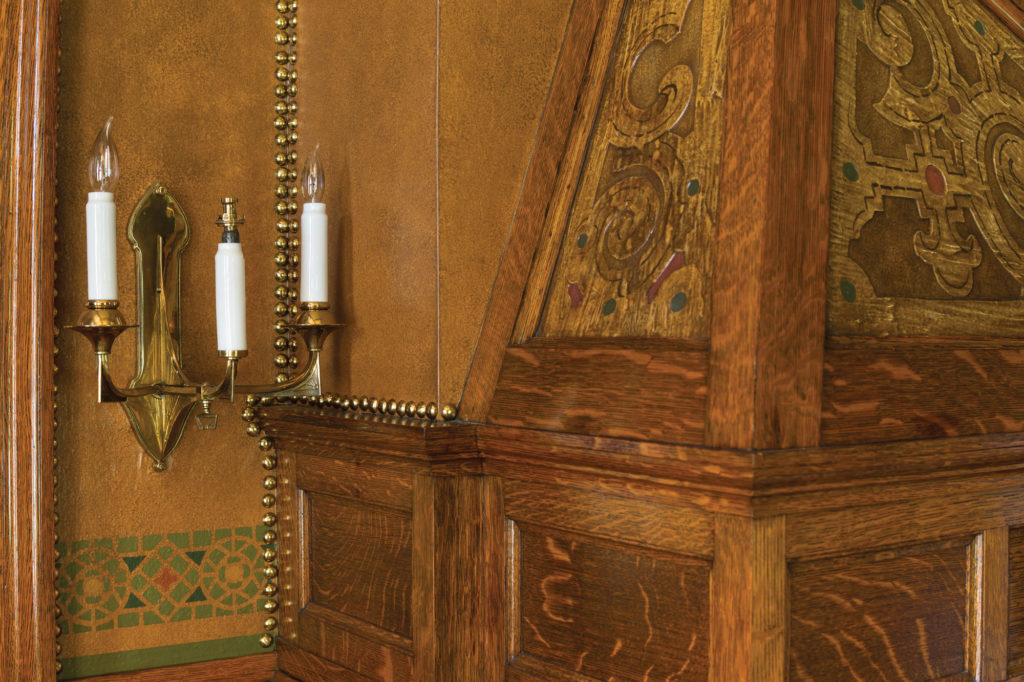 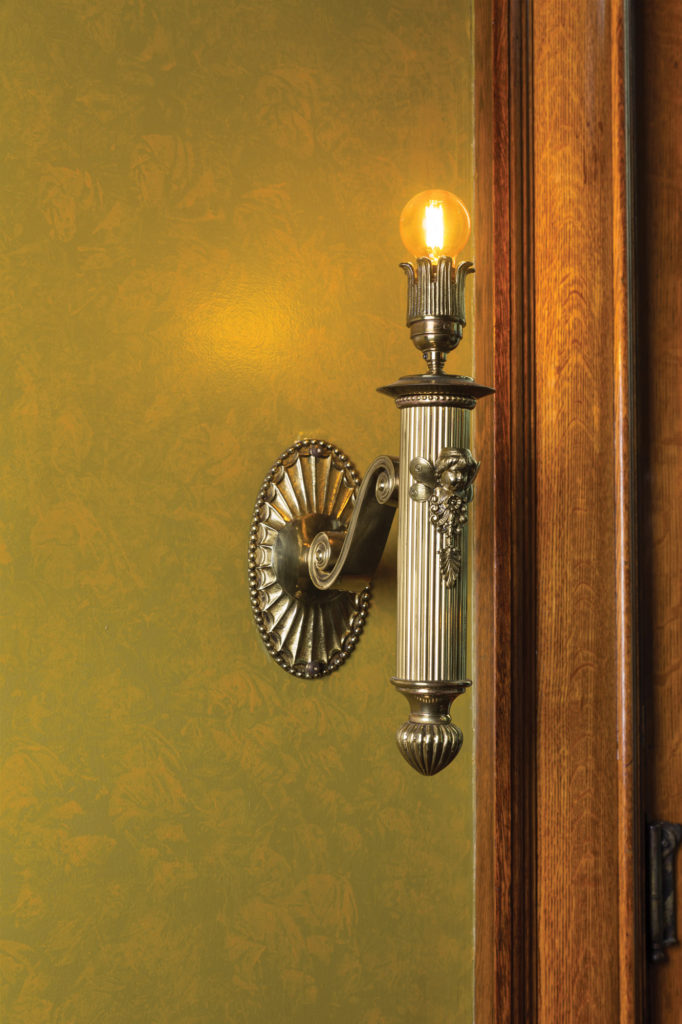 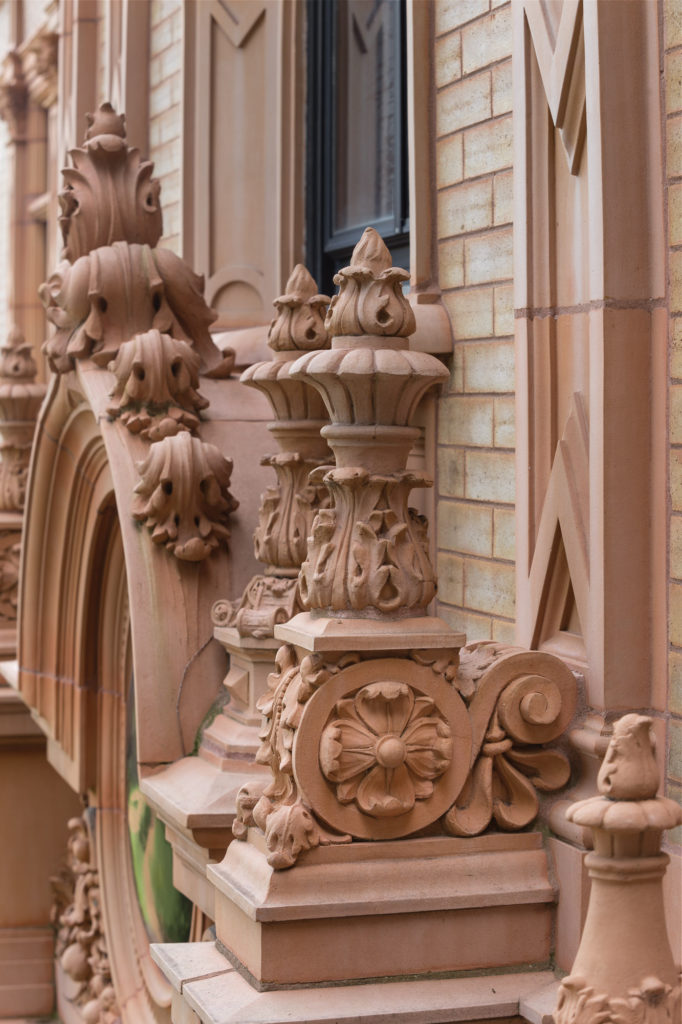 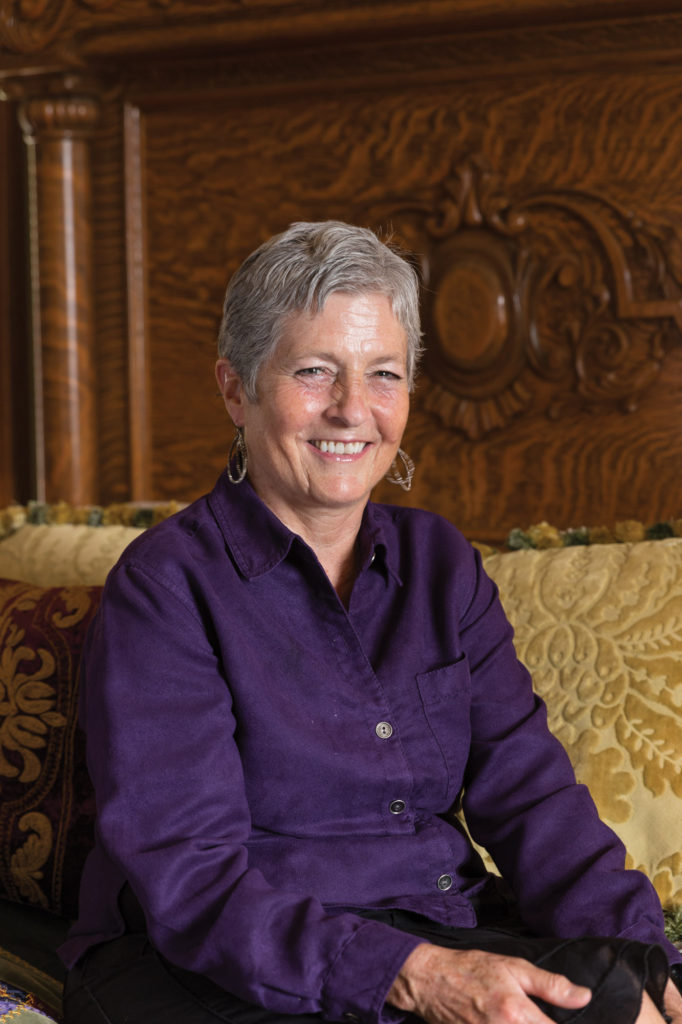 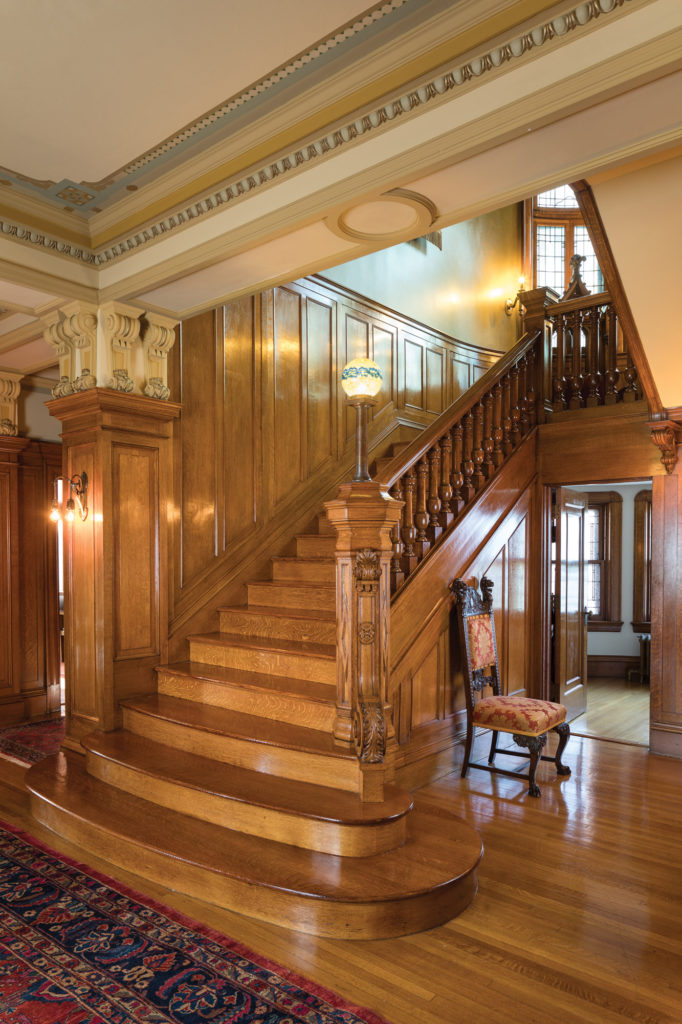 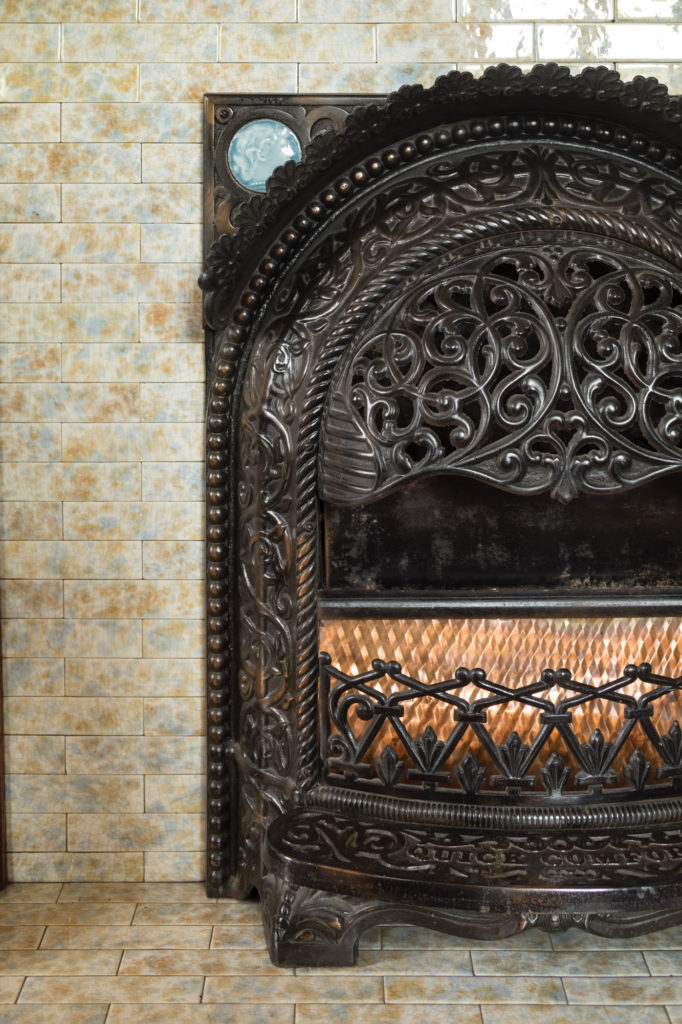 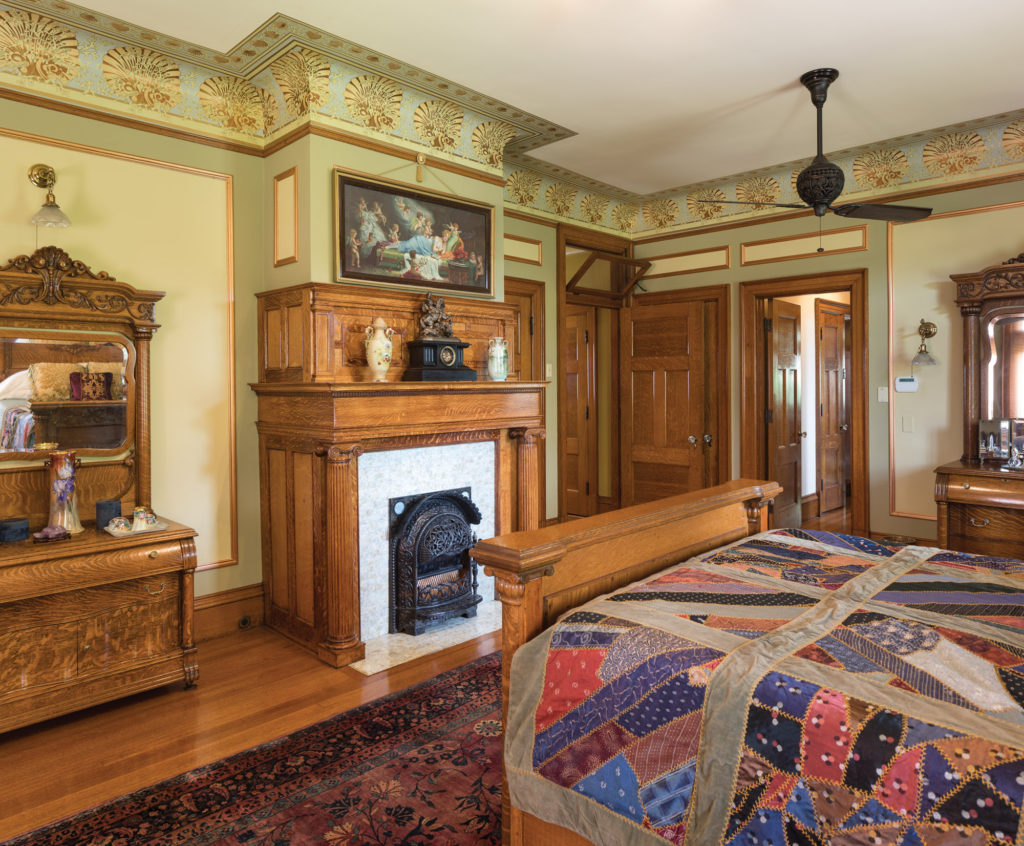 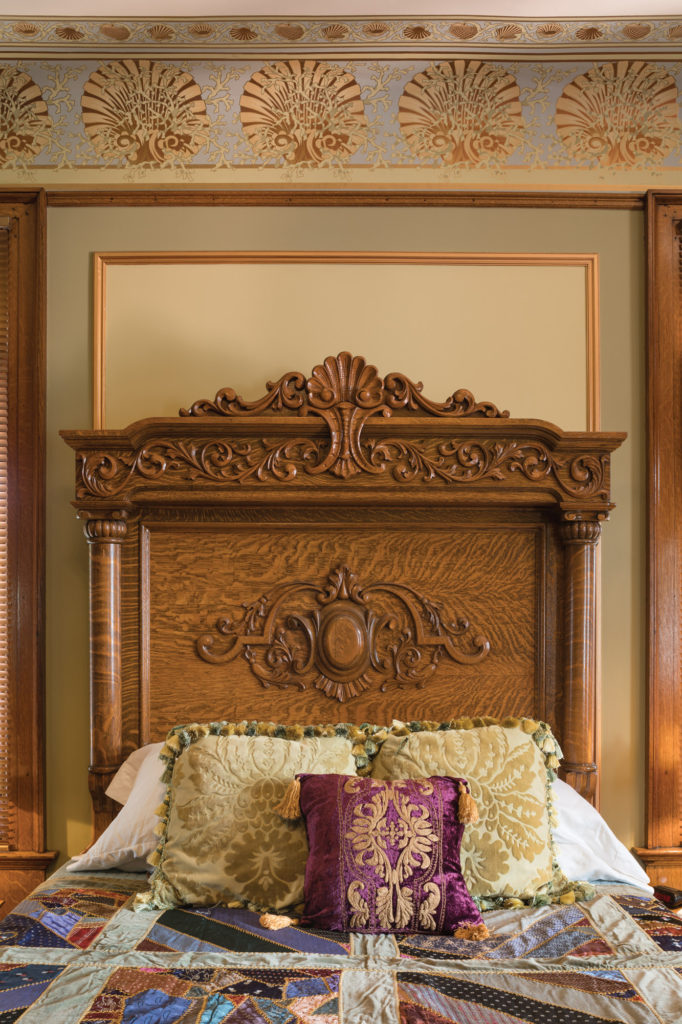 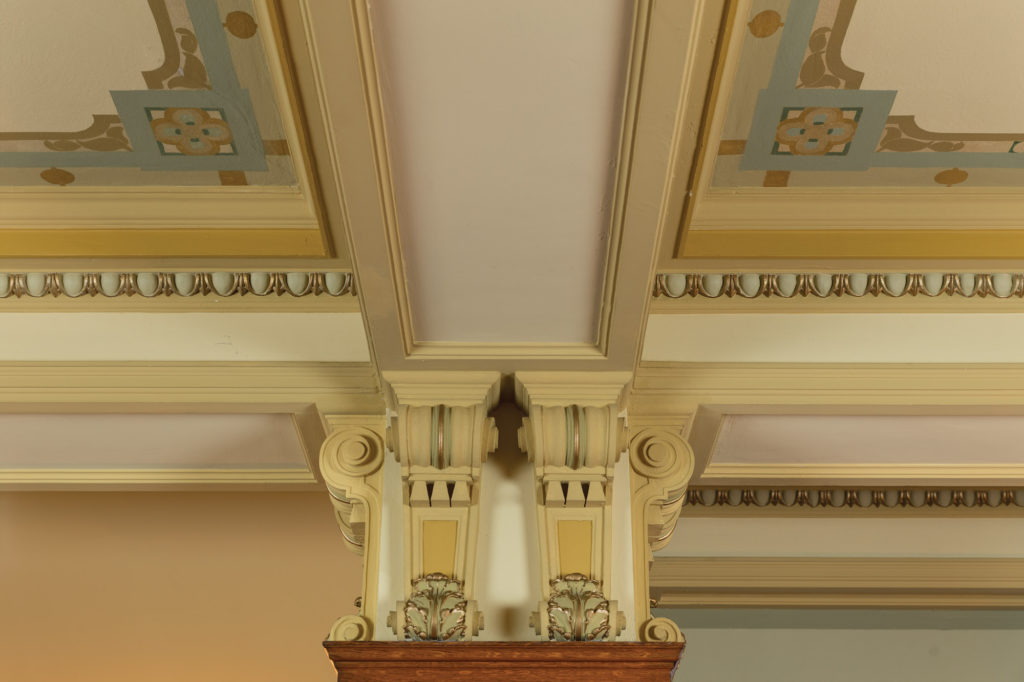 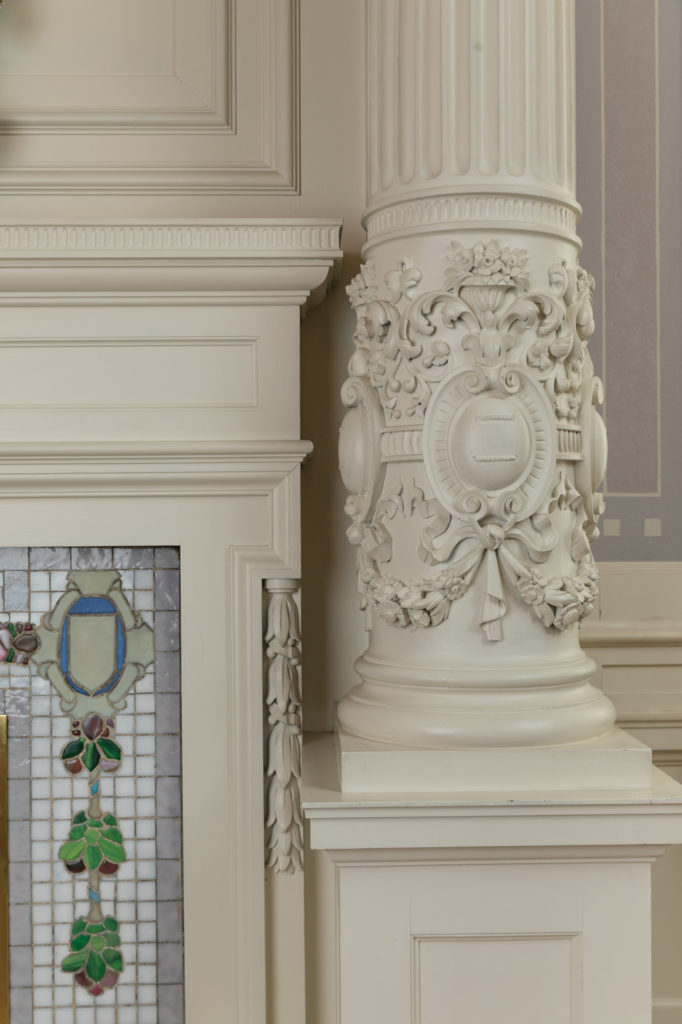 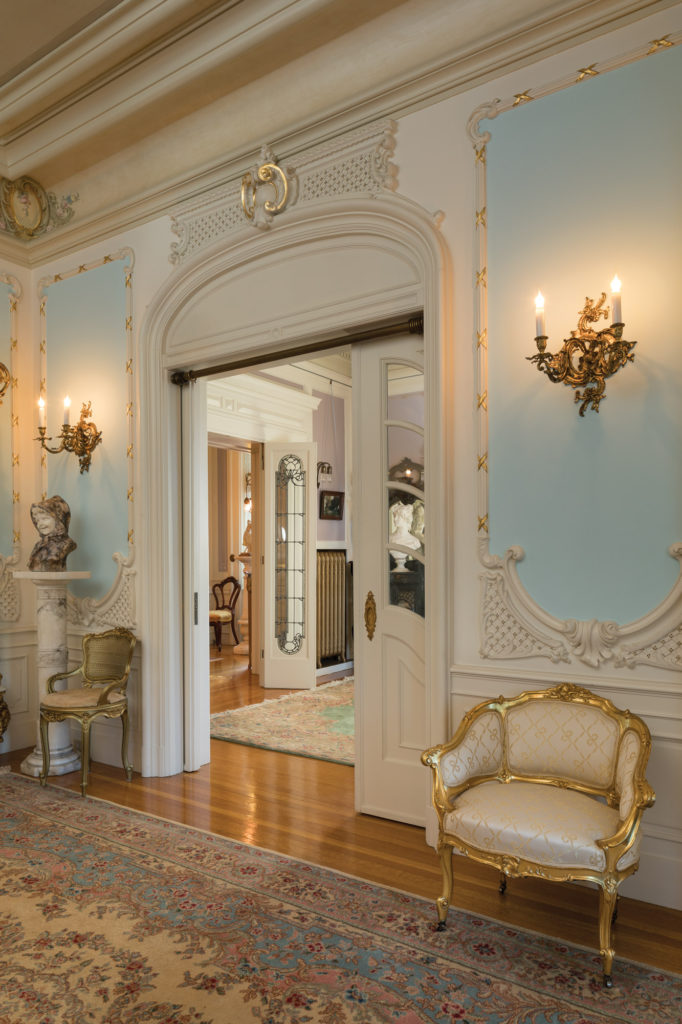 Contents of the interior had been sold at a weeklong auction when Adda died in 1990. Shelley was at that auction, never suspecting she would later own the house, and bought its dining-room chairs and a table with 16 leaves, which now furnish the breakfast room. Using period photos, Shelley was able to track down many other pieces, including four Art Nouveau chandeliers, gilt furniture, and oak library chairs. She combed local auctions and antiques shops and slowly added elements compatible with the original furnishings.

The water-damaged plaster ceiling in the main parlor was removed and the room’s ornate plaster ornaments were recast. Within circular mouldings and beadwork on the walls, Shelley discovered painted-over canvas panels. As the paint carefully was stripped away, scenes of cherubic fairies cavorting with big bumblebees were revealed. Incredibly, in a neighbor’s basement, Shelley found an 1885 issue of Art and Decoration magazine with the exact drawings seen in her panels: from “The Five Senses” by Franz von Stuck.

The kitchen space was near-original and remains so, with walls of glazed brick and an iron sink. Shelley added a tin ceiling in a pattern from 1909. Fittingly, her appliance updates include installation of a six-burner Magic Chef stove of 1935, along with a pair of 1930s Westinghouse refrigerators—which run perfectly.

Active in the preservation of St. Louis’s architectural heritage, Shelley Donaho opens the house for tours and events, often to benefit neighborhood concerns.

Charles Stockstrom was a co-owner of the Quick Meal Stove Company. Founded in 1881, the company’s St. Louis plant employed 2,000 people in its heyday. Through mergers, it became, in 1901, the American Stove Company—at one time the largest stove maker in the world, with up to 40% of the market. In 1914, the company introduced the first oven temperature-control device, and became known for dependable and convenient gas ranges. Stockstrom was president until his retirement in 1927; when he died, his brother Louis took over.

The company prospered until World War II. In 1951, it became Magic Chef Inc. (a brand name since 1929), but the company was unsuccessful in expanding beyond gas stoves to other appliances. After a couple of mergers, its assets were sold in 1987 to Maytag, which was acquired by Whirlpool in 2006. Magic Chef was spun out to CNA International/ MC Appliance Corp. The Magic Chef name is still in use today for various home appliances.

The Remarkable Transformation of the Byrne-Reed House

A Wright House in Rochester

Style & Serenity in a Neoclassical House