Doug and Kathy Boyden have strong ties to Vermont. Kathy is from a family of dairy farmers who have worked the land for generations, while Doug spent most of his childhood summers here with grandparents and eventually came to study at the University of Vermont—and never left. It’s this deep connection to the Green Mountain State that brought the couple to acquire a large parcel of land in the 1990s and build a house. They lived there happily for a time, but when the couple started having children, they soon realized they had outgrown the small place. Kathy wanted her children to experience what it’s like to live on a real working farm as she had growing up, but the land around the house wasn’t conducive for this purpose. Doug, who had been in the design/build business, began looking at adding onto the house, but ultimately decided it would be easier if the couple started from scratch.

They scouted for a property to build a new house that also could bring Kathy’s dream of running a farm to life. They settled on an old hill farm. “The land had totally reverted back to woodland, but all the old foundations and stone walls were still there,” says Kathy. The couple could make out where the old roads and hedgerows were and kept those markings when siting the new house and barns. Kathy’s brother—a logger—cleared 13 acres for the home site and farm, which they named Kind Horn. The felled trees were milled, dry kilned, and stored to become the framing, flooring, and cabinetry for the house. The couple chose not to build the house and barns on the sites of the old foundations, leaving them as ancient relics on the land. 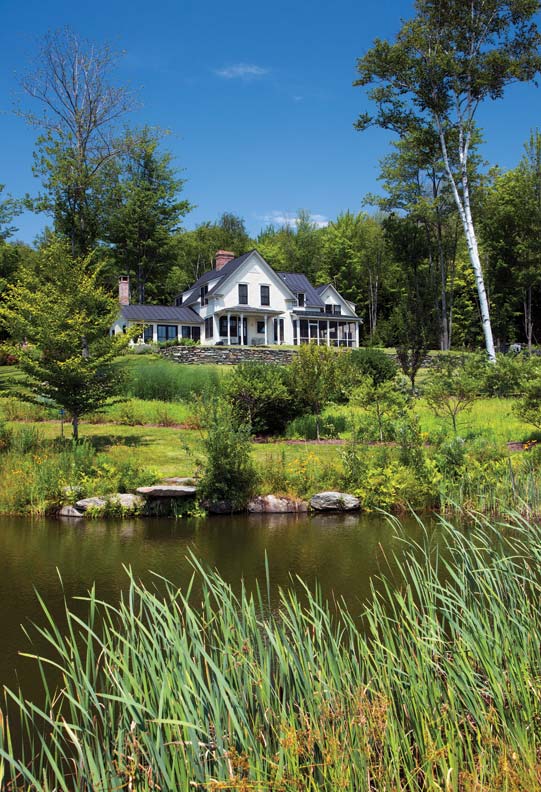 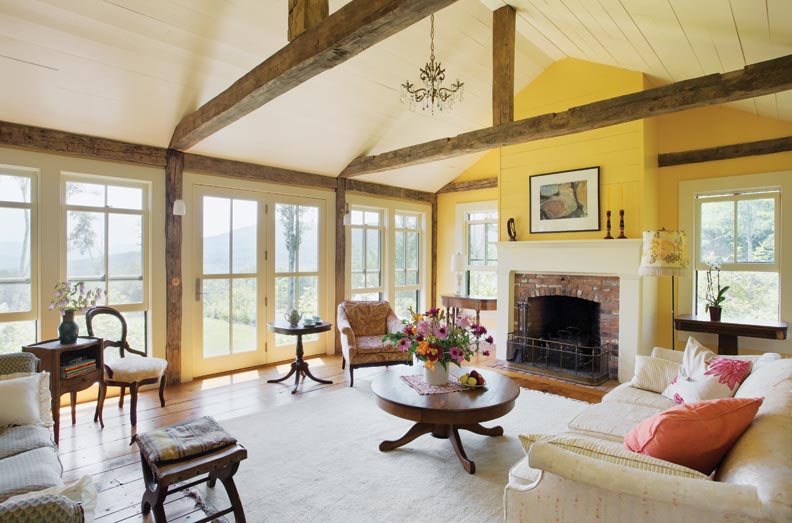 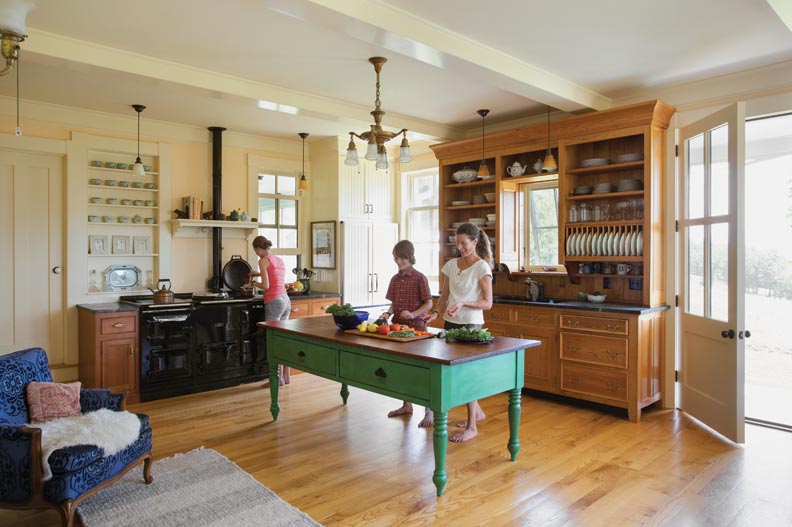 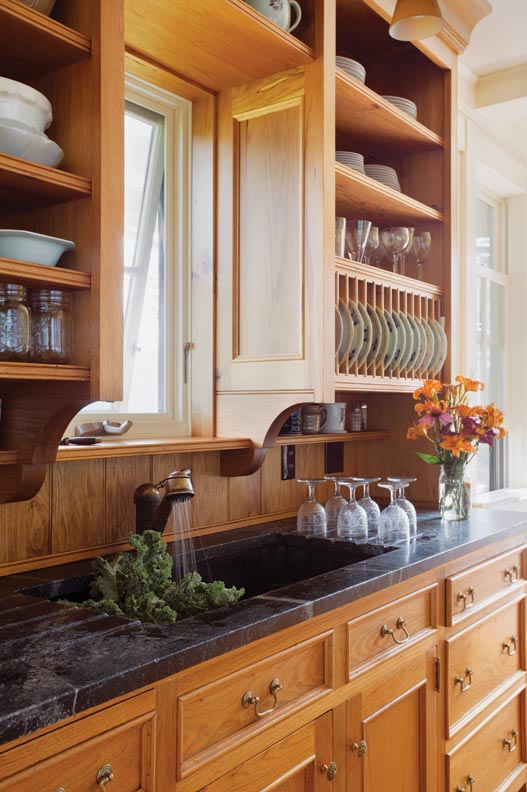 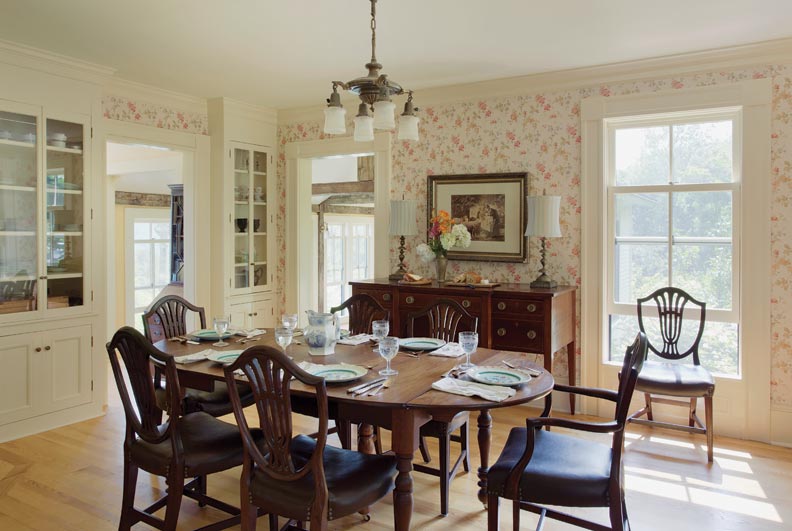 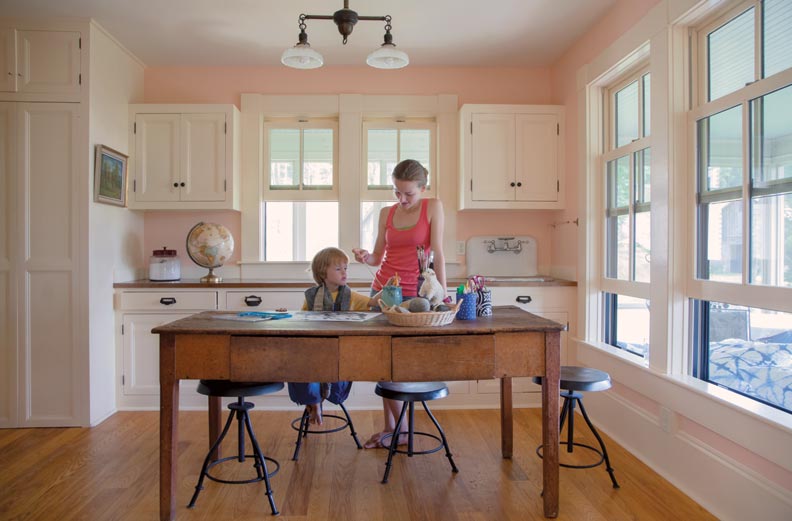 Doug and Kathy worked together to design the house. They knew they wanted a style in keeping with the vernacular Greek Revival farmhouses of the area, but they also had to figure out how the house would function—how spaces would flow and how rooms would be laid out. First and foremost, it would be a working farm (today Kathy breed’s organic Icelandic sheep), so the house had to overlook the pastures and barns. The couple also homeschool their children, which includes music (the day we spoke, Doug and Kathy’s son Lucas was practicing his cello), so they needed spaces for these activities. They knew they wanted the kitchen to be the center of the house and all rooms to play off of that center—much like a pinwheel.

Once they had an idea of how they wanted the home sited—and the layout of rooms and placement of doors and windows—it was time to begin detailing the house. Although they were obsessed with making the vernacular farmhouse historically accurate, Doug and Kathy couldn’t fully articulate the language of the Greek Revival. Then an article in New Old House caught Kathy’s attention, and she was happy to learn that the project’s architect, Sandy Vitzthum, lived just 25 minutes away.

As Doug worked with carpenter Patrick Millar of Millar Construction to begin pouring a foundation and building the frame of the house, the couple called on Vitzthum to guide them through the right design choices. Vitzthum sent the couple to study Greek Revival buildings in Montpelier for door and window ideas. She advised them on the appropriate proportion and scale, roof pitch, and overall massing. “Although we did choose the window sizes and placements, Sandy told us that double square, two-over-two windows would be accurate,” Kathy says. “We would go to her when we needed clarification on moldings or cabinetry, and Sandy would hand-draw a sketch.”

With Vitzthum now guiding the design details, a hierarchy of molding profiles developed in the house. She designed the exterior trim pieces for the pediments and corner boards, as well as a delicate Gothic Revival porch meant to look as if it were added at a later date. The formal spaces, such as the entryway and dining room, received more elaborate moldings. The stair’s newel post was a replica of an old newel post the couple had seen in an old house. “The dining room is lined with built-in shelving to display the family’s heirloom silver and china,” says Vitzthum. The corner fireplace is detailed in a Greek Revival style. The informal spaces in the house received simple flat trim. “Doug did much of the finish work in these spaces himself,” says Kathy.

“Our goal with the house was to use as much local and recycled material possible,” says Kathy. Ash from the land was used for the kitchen, dining room, and hallway floors; the wide-plank Eastern white pine boards in the den, Doug’s office, and all the upstairs flooring came from the land; and the living room floor is old hemlock, recycled from a hayloft. The kitchen’s cherry cabinets beside the AGA stove were also from the site, and the butternut kitchen dresser is made from Vermont trees. The bricks for both the living room and kitchen fireplaces are from a dismantled chimney that Doug and Kathy found in the basement of an old building they own in Burlington. The black slate hearths in the kitchen and the dining room are made from Vermont slate. Kathy also found old porcelain sinks for the downstairs bath, kids’ bath, and arts and crafts project sink at a salvage store. The master bath’s white marble counter is Vermont marble, and the barns are made from antique frames taken down from two northern Vermont sites.

“Sandy deserves so much credit for making sure that our house is a historically accurate,” Kathy notes. “If it hadn’t been for Sandy, we would have a really nice house, but not an extraordinary house.” For the couple, getting all of the details correct completes the house. “The success of our house as an authentic Greek Revival, and generally a wonderful home in which to live, goes to Sandy,” Kathy beams, as she looks out over the pastures, where her sheep graze in the afternoon sun.