Approaching Figure Eight Island, off the coast of Wilmington, North Carolina, is such a house: Chadsworth Cottage. It’s the waterfront home of Jeffrey L. Davis, the founder of Chadsworth’s 1.800.Columns. Its designer, Christine G.H. Franck, is fluent in the classical language that informed its creation. “My primary goal with anything I design is to ensure that it just feels right,” says Franck (a frequent contributor to New Old House). “The language that you use to express the design ideas is an important part of what makes a building feel right, as if it’s supposed to be there.” 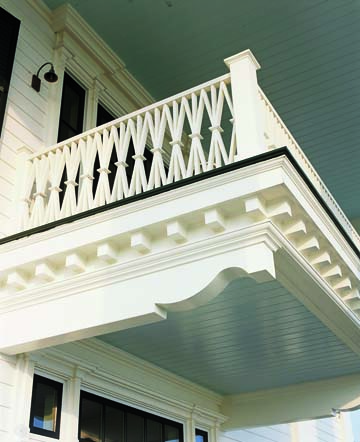 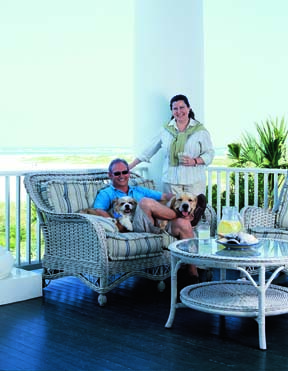 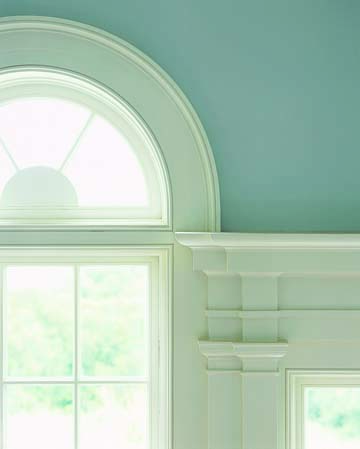 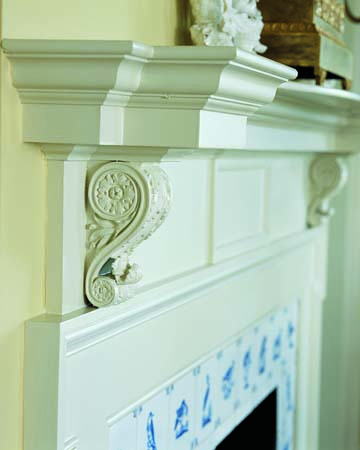 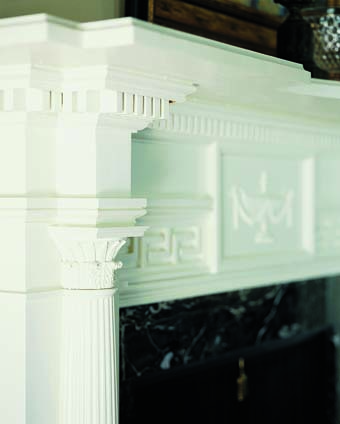 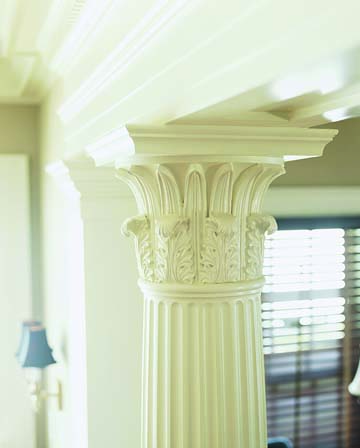 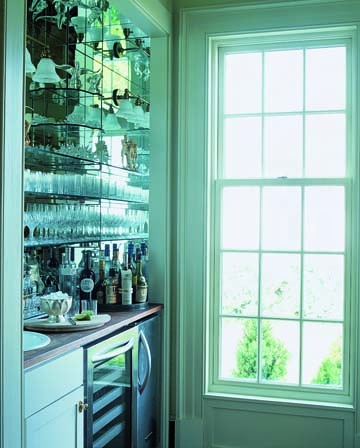 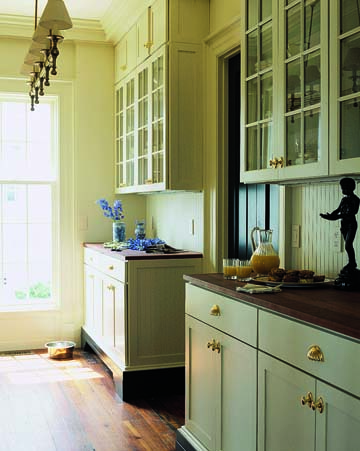 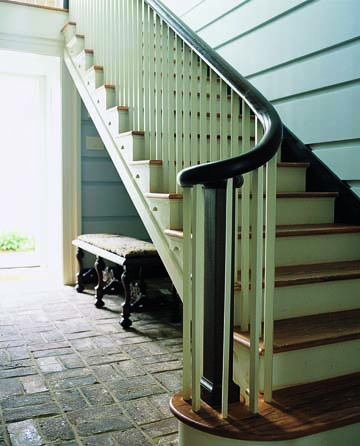 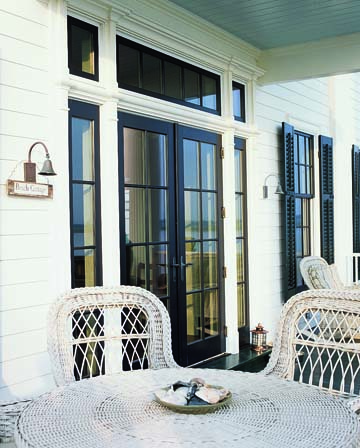 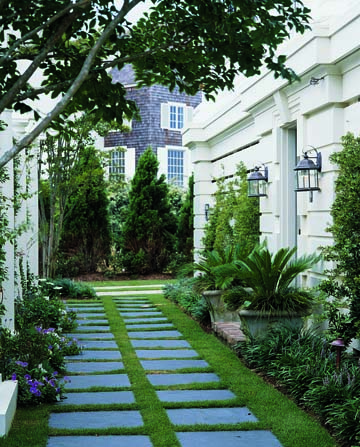 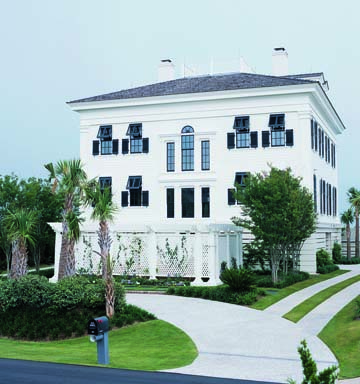 Looking at the completed house—and how right it feels—it’s hard to believe that Davis initially considered building a poured-concrete structure, thinking it more likely to survive a hurricane. But because Davis is also a board member of the Institute of Classical Architecture & Classical America, it’s not surprising that he chose a classical model for his new house instead. With the help of a local engineer, he drew up a rough design of a 40′-by-40′ cubic house with four columns on the waterside and a big double-story portico. “When deciding what side of the house to put emphasis on, I chose the waterside; I could envision boats coming down the Intracoastal and seeing this villa rising from the sand,” Davis says. “I also knew this house was going to be all about the details. So very early on I realized I was going to need Christine.”

For inspiration, Davis began sharing photos of favorite Federal and Greek Revival houses with Franck. But because building codes specify that waterfront homes have an elevated first floor and breakaway construction on the lowest level, a Greek Revival, which sits on a low base, would not be possible. “Jeff was also pulling photos of Palladian villas,” Franck says. “In the end, the direction that made sense was a Palladian villa, with its elevated high base and Roman temple front. We weren’t interested in the house being a strict interpretation of a particular period. We were more interested in letting the classical language and the traditions of the place inform the design project.”

As one ascends the 10′-wide, three-story staircase from the entry below, the view through the central corridor leads the eye out to the water and the broad horizon. The transverse arch has a historic precedent in this region of North Carolina.

Because Davis wanted Chadsworth to look like a surviving remnant of the island’s past, Franck tied the house closely to local tradition, looking specifically to houses in nearby towns like New Bern, North Carolina. “There was not any attempt to be wholly evocative of any time or place in North Carolina,” she says, “but there are specific quotations in the house.” For example, the railing around the southern balcony is based on a bundled wheat design from the historic John Wright Stanly House in New Bern. Full pilasters at the corners were used rather than thin corner boards as “a nod to the late Federal/early Greek Revival tradition in New Bern,” Franck says. “Because much of the Federal-style architecture in New Bern was built rather late, elements of Greek Revival began to sneak in.”

Inside, the staircase details were inspired by another historic New Bern house, and the elliptical transverse archway on the first floor has a local precedent. “That’s part of the poetry,” Franck says. “Connecting with the place and connecting with a time, so 100 years from now, someone might recognize that some elements came from somewhere else, just as someone would notice today when looking at an old home.”

Of course, the very forces that would make it unlikely an old home might have endured on Figure Eight Island through the ages—hurricanes, high winds, and flooding—were the very forces Franck’s design would have to address if Chadsworth Cottage is to survive into the future. The house is grounded to the site using an interlocking grid of wood pilings that were driven 16′ into the sandy soil and nearly 50 concrete grade beams.

“The engineering is a marvel in itself,” Davis says. “I rode out Hurricane Ophelia in this house for 16 hours, and it was solid.” As protection against both hurricane-force winds and everyday sun, Franck specified Bermuda shutters for the southern windows and found a company that produced PVC shutters that looked as good as traditional wooden shutters but would be more durable in this harsh environment. Franck also turned in part to local builder Jim Murray of Murray Construction for guidance. “All they do is build along the coast, so they have a tremendous body of knowledge,” she says. “When I insisted on wood windows, for example, they explained that during a hurricane, the blowing sand literally sandblasts off the paint, so based on their experience a clad window was best.”

Creating the open floor plan that Davis envisioned posed additional challenges. Considering the dimensions of the house, Franck knew that a truly open floor plan would make it appear that the interior ceilings were lower than they are. Her solution was to run three rooms across the waterfront side of the house—a dining room, a large hall, and a living room—painted in the same color and separated only by column screens. “So you have a living room and dining room in the traditional sense, but they are open to each other and you really occupy those three rooms as one room,” she says. “This way it feels vast because the proportions are better and it picks up on the horizon line outside.”

Another of Davis’s expectations was that the house be built economically using—as much as possible—stock materials. He wanted to demonstrate that building a classical home needn’t break the bank, that it was something anyone can not only aspire to but also achieve. The exterior columns—from Chadsworth’s 1.800.Columns, of course—are in the colossal Tuscan order and made of fiberglass. “It’s a great material to use,” Franck says, “especially when you are talking about 20′-high columns and a beachfront environment. And the Tuscan exterior says ‘This isn’t going anywhere.'”

Franck then designated a hierarchy with regard to the orders of columns: Tuscan for the exterior, Ionic for the column screens on the first floor, and Corinthian in the private quarters upstairs. “These are based on specific Grecian models, and the entablatures are a rendition of those Grecian entablatures, but it’s not a temple on the Acropolis. It’s a house, so the details are scaled down appropriately.”

Matters of scale became a primary concern when it came to the interior millwork. “Stock millwork profiles don’t give you the projection or depth that you would like to have in a room that has 10′ ceilings and 8′ doors. You really want something heavier and beefier,” Franck explains. She employed a variety of innovative solutions, including using millwork upside down and combining stock pieces. In the end, the millwork was a combination of half stock and half custom milled. “The primary generator of the house is just simply the classical language working through specific problems that need to be addressed,” she says.

Franck’s confidence in the power of the classical language was put to the test when a question arose regarding the siting of the septic system. Because of the lot’s small size and proximity to water, there was no room for a traditional leach field, so Chadsworth Cottage required an aboveground biofiltration system installed directly in front of the house. Franck was undeterred. “The interesting thing about these sorts of problems,” she says, “is that they are opportunities for design solutions.”

Her remedy was to construct a pergola covered in wisteria and jasmine that both disguises the septic system and enhances the classical aesthetic. Moreover, the pergola enriches the way in which visitors first encounter the house. “What it does from a design standpoint,” Franck explains, “is that when you arrive from the land side of the house, you have a very constricted approach that heightens the excitement as you pass through the lower entry, rise through the stair hall to the first floor, and turn to see the whole view open up to the landscape and the ocean.”

In the end, Chadsworth Cottage is a model of how a talented designer uses the classical language to solve site-specific problems, accomplish her client’s desires, and remain true to a sense of place and a sense of history, with the result of a new house that faithfully embodies a traditional style. “Moreover,” Franck says “Chadsworth Cottage is a testament to the power of Davis’s vision of a house with that ineffable Southern quality of comfort, good taste, and most importantly, hospitality.”