We were living in a 4,000-square-foot house in Dallas,” Dan Dixon explains, “and we planned to downsize. We’d vacationed in Vermont, and appreciated that it was a marriage-equality state. But it turned out that the house we fell in love with has eight bedrooms, measures 6200 square feet, and is listed as one of the 10 most historic houses in the state. So much for downsizing!”

Dan and his husband, Bob Ivancic, moved from the Lone Star State to the Green Mountain State in 2011. Their home in Jericho, 15 minutes from downtown Burlington, is known as the Governor Martin Chittenden House. Its construction dates to ca. 1796, when Martin Chittenden married; the house was probably a wedding present from Martin’s father, Thomas. Thomas Chittenden was Vermont’s first governor, and Martin followed him in politics, serving as the state’s eighth governor during the War of 1812. He’d also served as a delegate to the Constitutional Convention from 1791 to 1793.

The five-bay, two-and-a-half-storey, red-brick house with a prominent Palladian window over the entry had seen some alterations. The attic shows evidence of an original hip roof, and the rather flamboyant, broken-pediment door surround dates to after 1940. Photos taken in the late-19th and early-20th centuries show that the house had been painted white. But the form of the house—three bays deep with gable-end walls laid in a distinctive diamond-checked pattern—remains unchanged. In traditional New England farmhouse fashion, the main block is adjoined on the first floor by a series of rooms, probably additions, rambling back to an ell comprising a barn and garage and service areas.

“The house is built like a fortress, with a foundation that’s three feet deep,” Dixon explains. “Some plaster had cracked, but the copper roof installed by a previous owner is still good. The house had been neglected for 60 years, so we knew that it needed lots of work and we budgeted for it. But then we got our first heating-oil bill: It was $1500 for one month!”

Dixon, a retired financial consultant, and Ivancic, a psychotherapist turned immigration specialist, had renovated a series of homes. But nothing could prepare them for the experience of owning a big, 18th-century house. 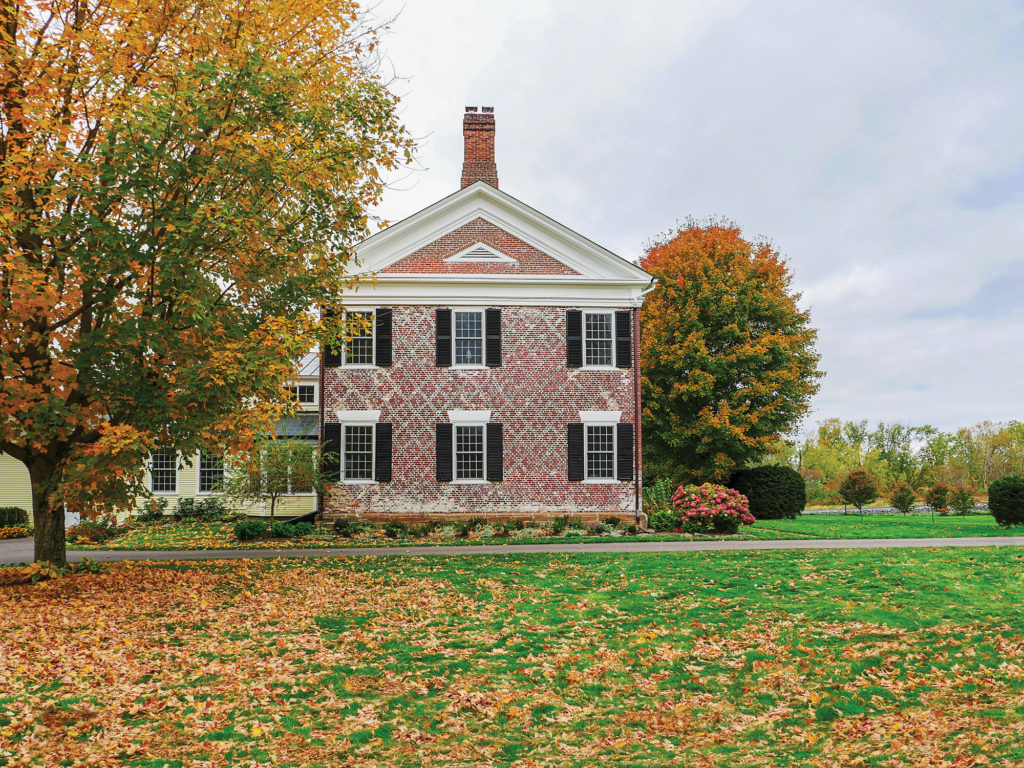 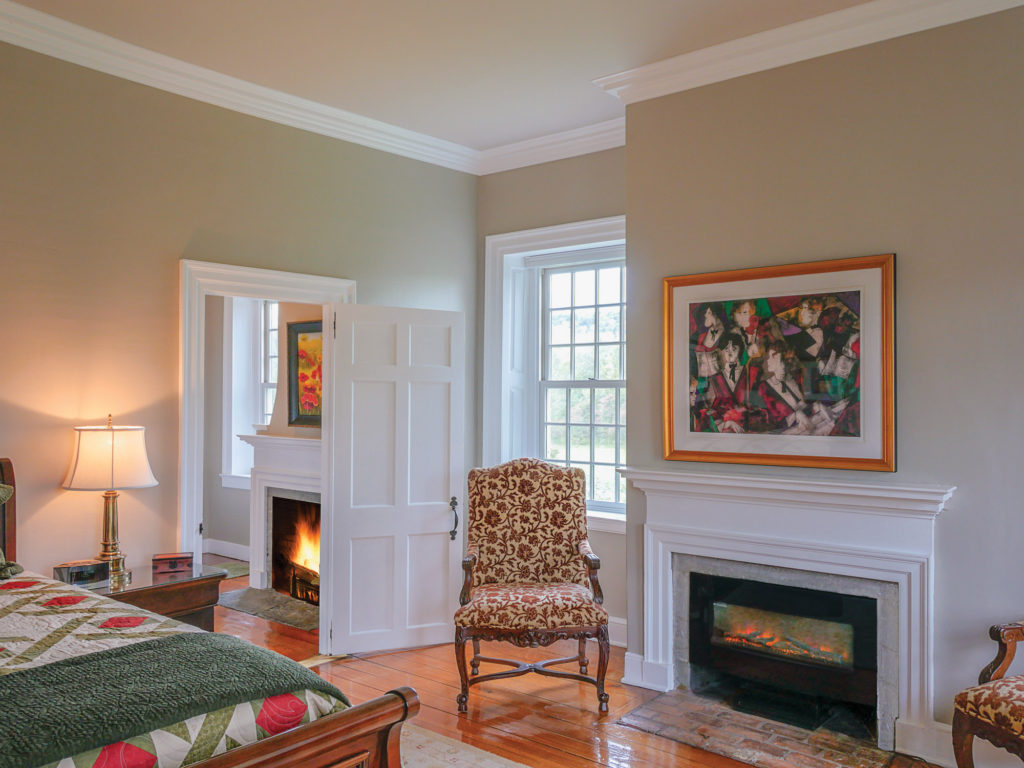 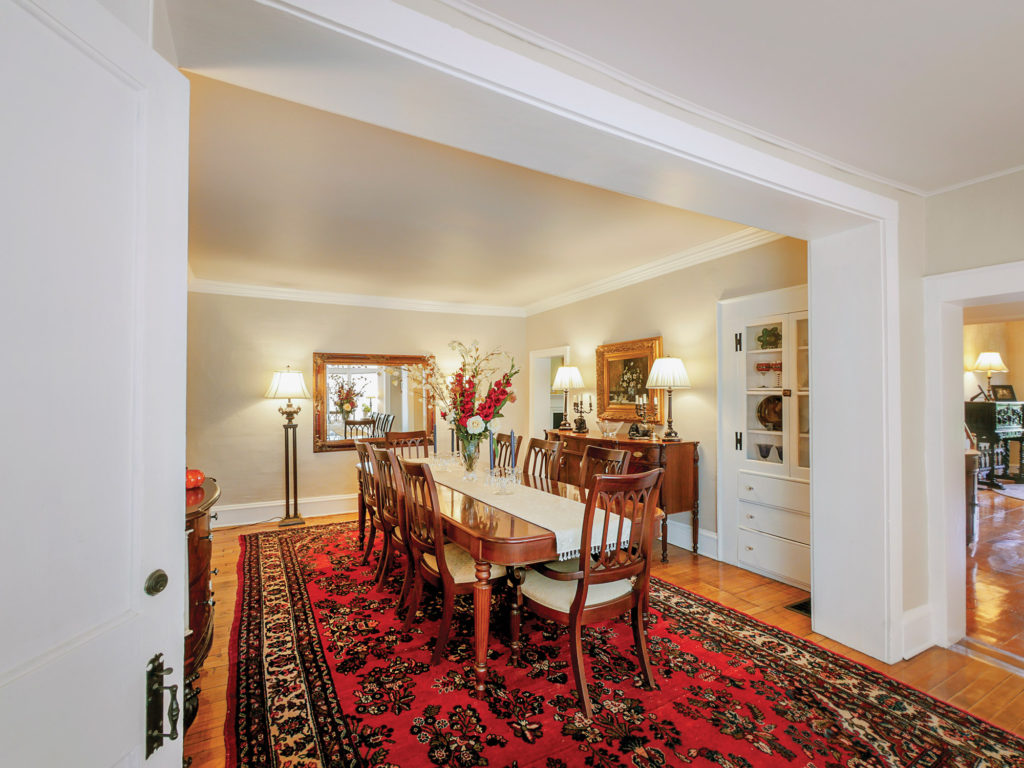 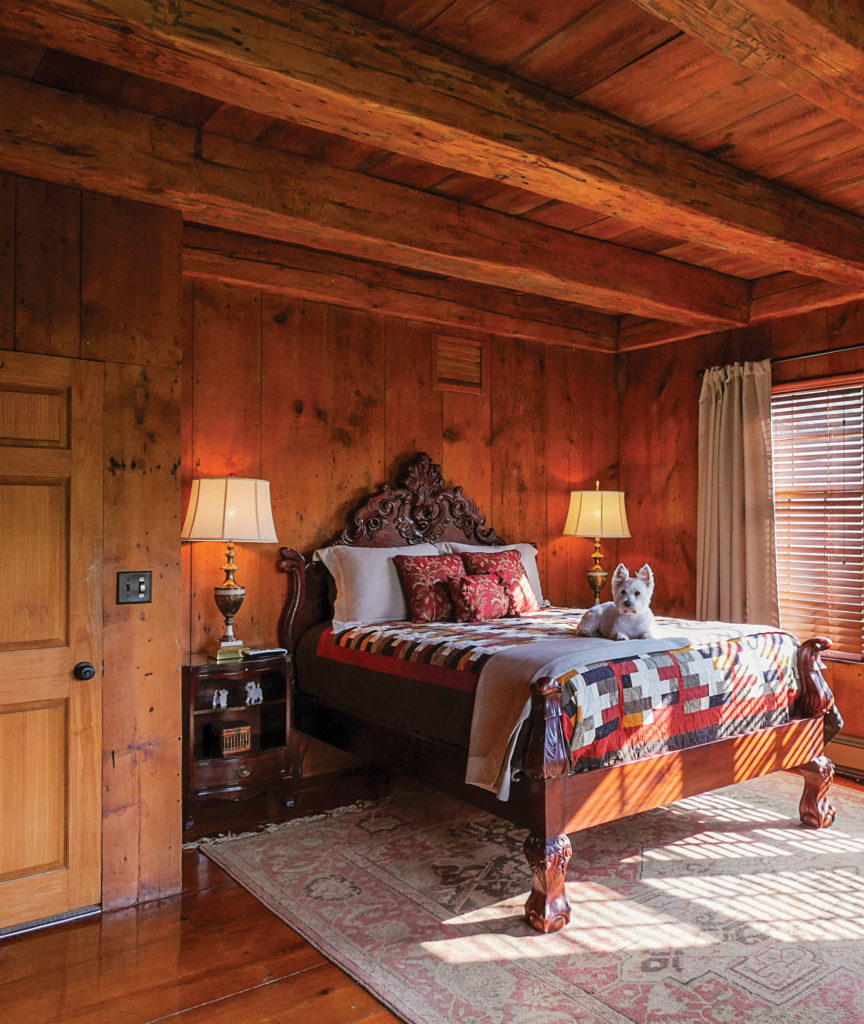 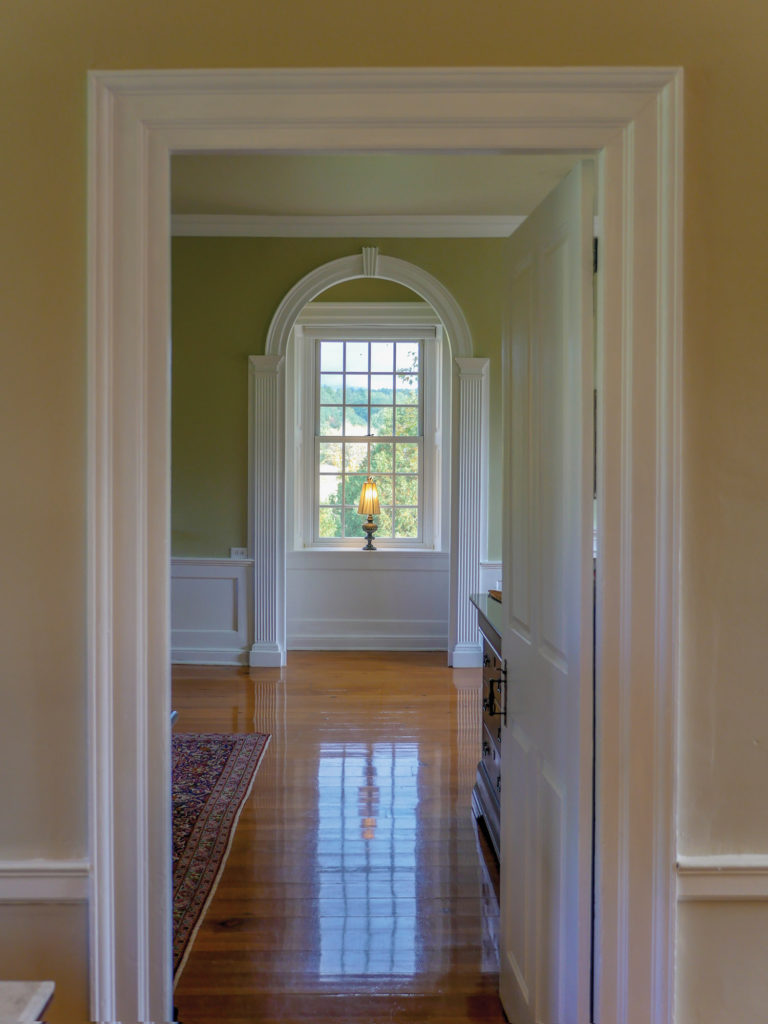 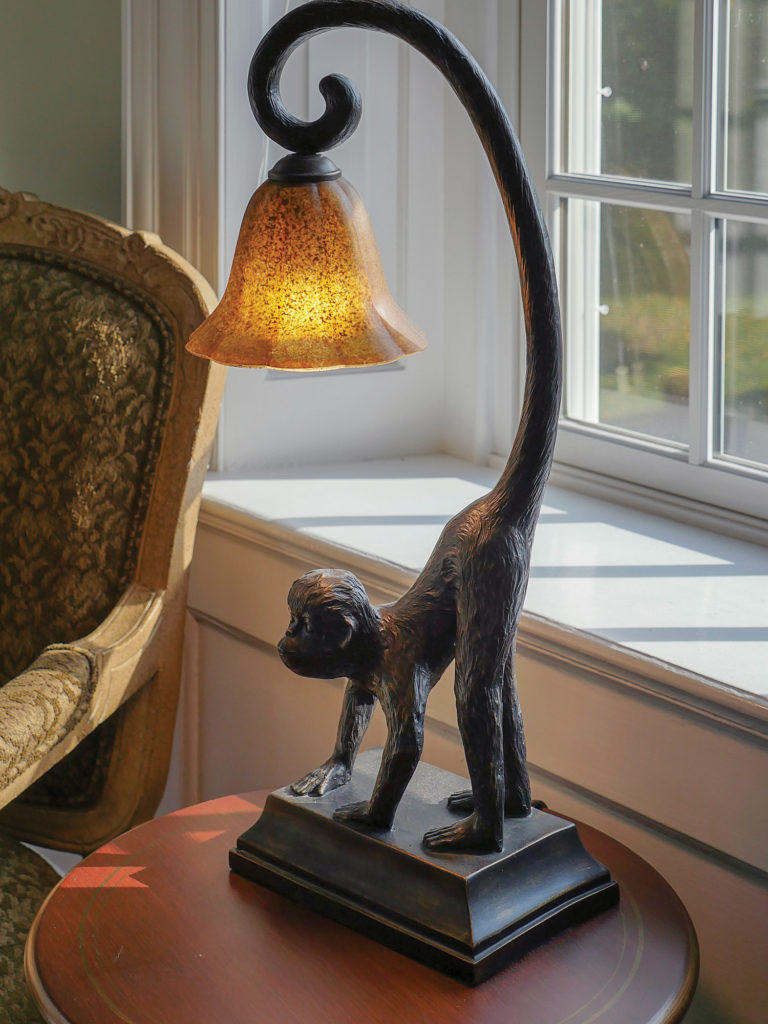 “First, we insulated, spending a huge chunk of our renovation budget,” Dixon says. “We spent endless amounts of time and money on the windows, especially that big Palladian window. We installed a new kitchen, as the original kitchen and a bakery had been in the basement.”

The couple updated electrical and plumbing systems and refinished the original floorboards, some of which are 20 inches wide. In some rooms, they added crown moulding.

“If we’d had any idea of what we were getting into, we probably would not have taken this on,” says Dan Dixon. “But now that we’ve done all the work, we have a wonderful home.” They like to entertain and find the layout ideal for guests. The broad second-storey hall, lit by the Palladian window, acts as a private sitting room that their guests appreciate. A guest suite occupies one side of the second-floor in the main block; additional guest rooms and an exercise room are found in the rear barn spaces.

“The rooms are huge, and we worried about filling them,” Dixon says. “But we had a lot of furnishings we moved here from Texas.” He and Ivancic found that classic, contemporary furniture is quite at home in the neoclassical rooms.

To choose paint colors, they began with 20 possibilities painted on plywood panels that could move around as the light changed in rooms. They whittled the number down to eight and, after much trail and error, ended up with four gentle tones of yellow, green, taupe, and blue. A wall treatment for the front hall, however, became a dilemma when they uncovered early stencils.

“We didn’t really love the look of the stenciling, but of course it is historic and important.” Adhering to curatorial practice, they covered it with wallpaper to preserve it for the future.

The formal living room features what might be the house’s most important historic document, a painting on the board of the overmantel. It depicts the eagle of the Great Seal of the United States, a liberty pole and Phrygian cap, also known as the Liberty Cap, a Vermont spruce tree, and a United States flag with 16 stars and stripes. It helps date the house to 1796, when Tennessee was admitted to the Union as the 16th state. Thomas Chittenden, the first governor and Martin’s father, died in 1797.

Historians speculate that the painting was done by a member of the original building crew. “Or maybe it was done by an itinerant painter who also did the stenciling,” Dixon says. “We are proud to have such a historic and decorative element.”

Chittenden House’s most striking exterior element is the distinctive, diamond-pattern, Flemish-bond brickwork in east- and west-facing gable ends. It endeared the house to today’s owners.

“It’s an unusual design for Vermont,” Dan Dixon says. Another house, in nearby Richmond, has the same gable ends, but that house was built about 20 years later. The builder is unknown for both houses, but because of the time span it’s not likely that the houses had the same builder.

Furthermore, “there are a few other examples in the southwestern part of the state,” Dixon explains, “even though this element is more often found in the Hudson River Valley and in Pennsylvania and New Jersey.”

Dixon believes that the pattern, which is more expensive and labor-intensive to construct than English-bond or regular Flemish-bond brickwork, was meant to telegraph the social standing of the first owner.