As soon as he saw the seven-acre property on a peninsula, Gil Schafer knew it was a special spot.

The New York City-based architect had, after all, spent practically every summer of his life in Brooklin, the wee waterside town in Maine, which is home to the triangle-shaped, pine tree-covered lot that took his breath away.

“The water wraps around the house on two sides, and when you stand on the land, between you and Mount Desert Island, there are only a couple of islands—and they are protected land,” he says. “There are no lights, it’s completely unspoiled. What’s magical is that when you look at the deck on the house, the railing appears to be in the water—you can’t see land.”

His finding the residence was a fluke; he’d rented it only because, late to the game, he couldn’t find anything else available. When he discovered it was for sale, he knew he had to make this his permanent summer home.

His choice, however, presented him with a conundrum: He’s a classicist, and the nondescript, 1990s A-frame house that came with the property is a quintessential Contemporary.

Tearing it down was not an option, because new building regulations would have required Schafer to site a new residence much farther from the water.

Instead, he gave the 3,000-square-foot, two-story structure a minimal makeover that bridges the time and style gaps, creating a rustic residence that blends beautifully with the lovely landscape.

“To give it a sense of history and tradition, I thought of a barn aesthetic,” he says, adding “that was the only traditional reference that made sense.”

On the exterior, he replaced old barn-red vertical siding with horizontal cedar clapboard stained an olivey-piney green that nods to the surrounding woodlands. He covered the roof with Alaskan yellow cedar shingles. He enlarged and raised the windows so they could say hello to the sky, and gave them age by adding muntins.

The deck, which wraps around one side of the house, was re-created in the same footprint, but in ipe; new railings of his design feature a nautical motif. Juliet balconies were added to open the first-floor rooms to the water.

Dormers—one over the kitchen, one over the front-door stair hall, and three in the back guest suite—further link the house to the outdoors and provide a hint of classical character.

Inside, Schafer gutted the house and, retaining the ceiling beams, rearranged the first-floor rooms to create a 32-foot-square great room comprising a dining room, living room, and kitchen. He added sliding glass doors to enhance the scenery, and paneled the walls in wide-plank boards.

“With the original layout, the triangular kitchen, which was merely serviceable, was in a corner,” he says. “The rest of the room was so big that it was hard to make the furniture fit comfortably; it was like living on a basketball court.” The newly reconfigured kitchen, which is long and faces the water, features an island with a two-inch-thick granite countertop. 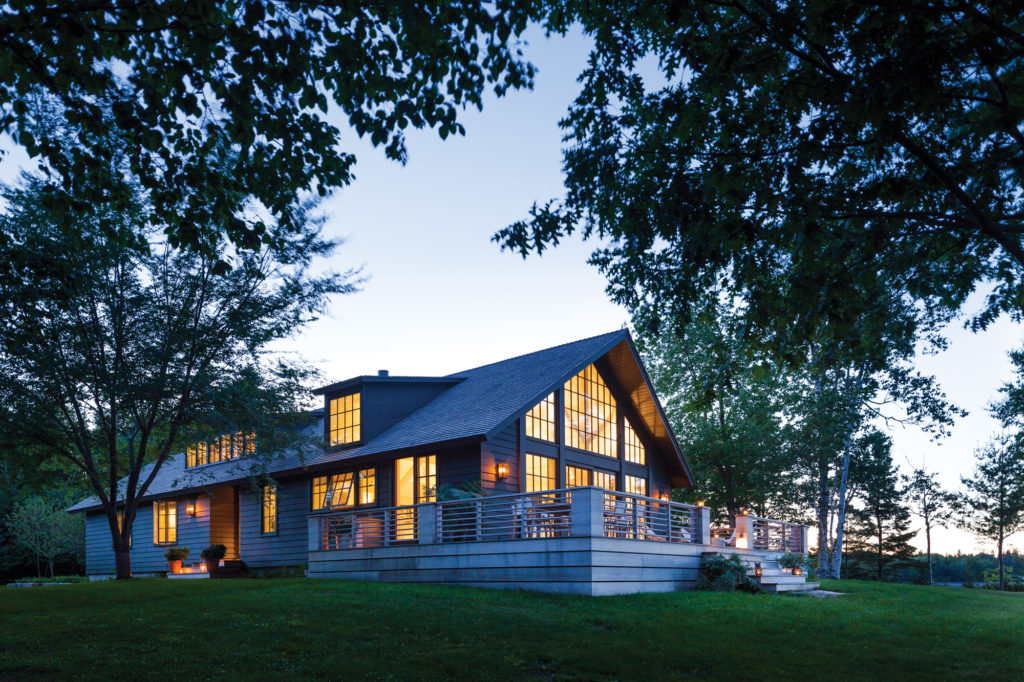 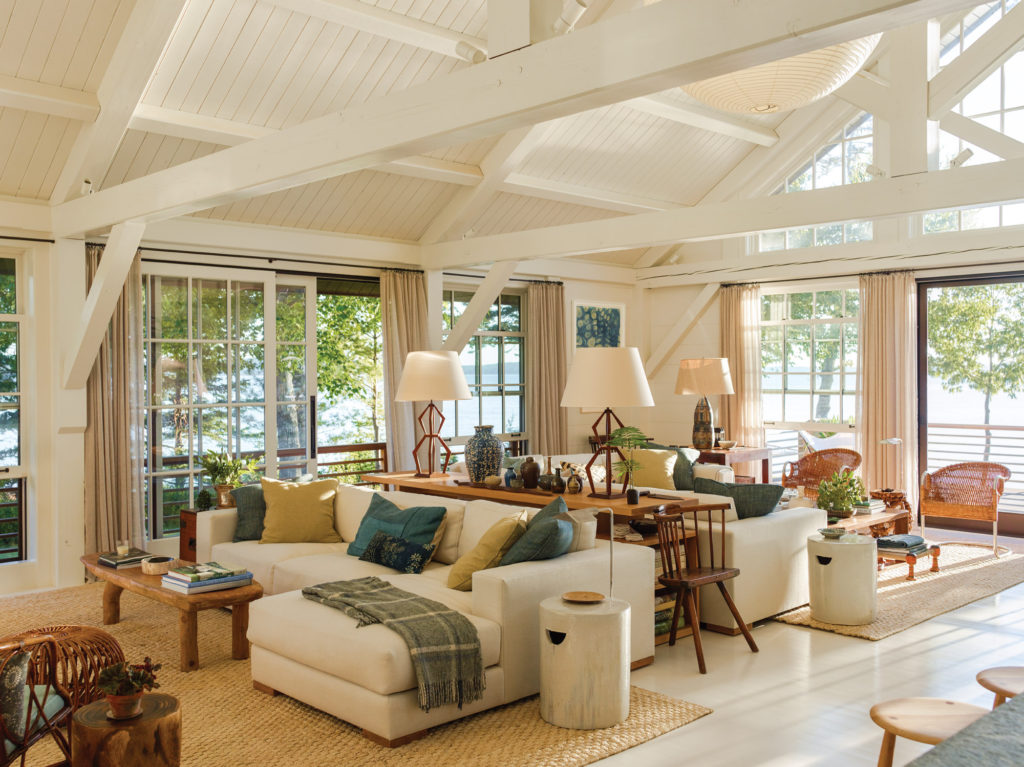 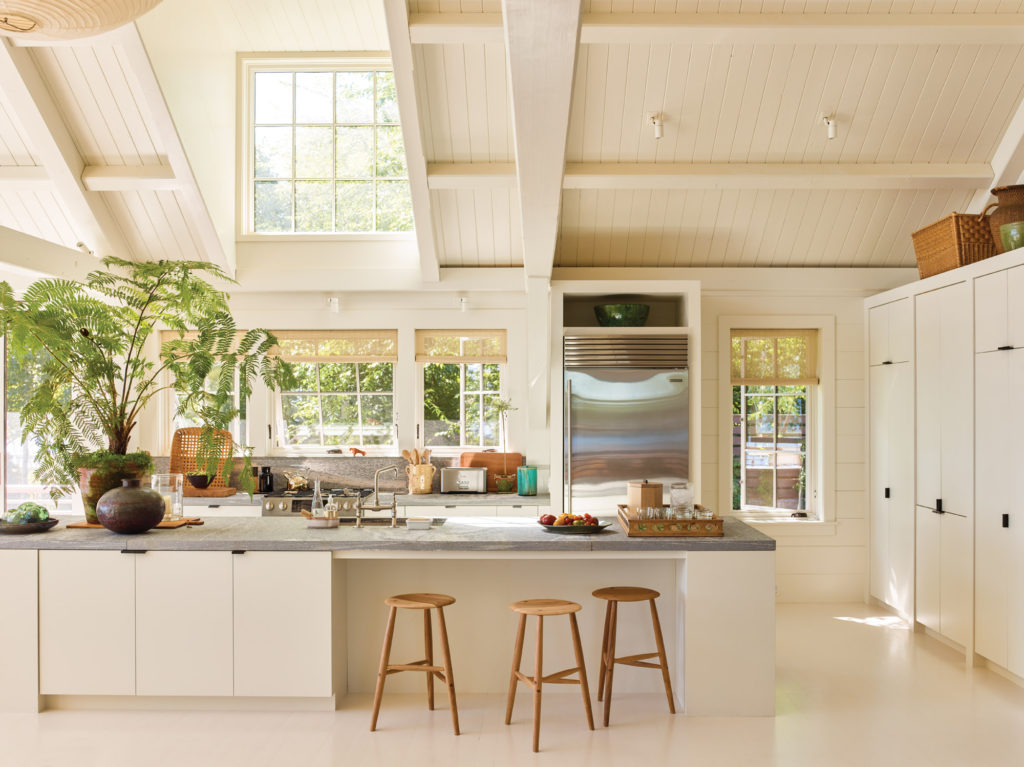 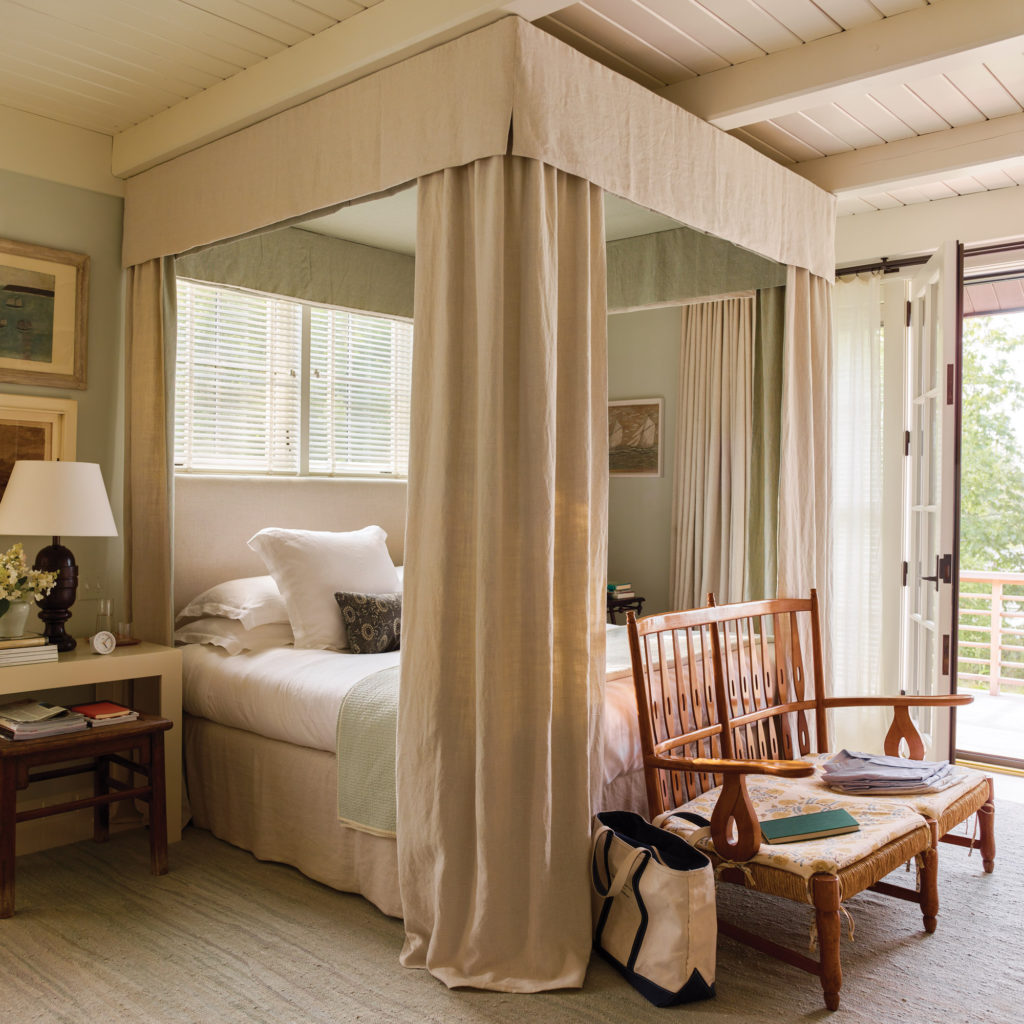 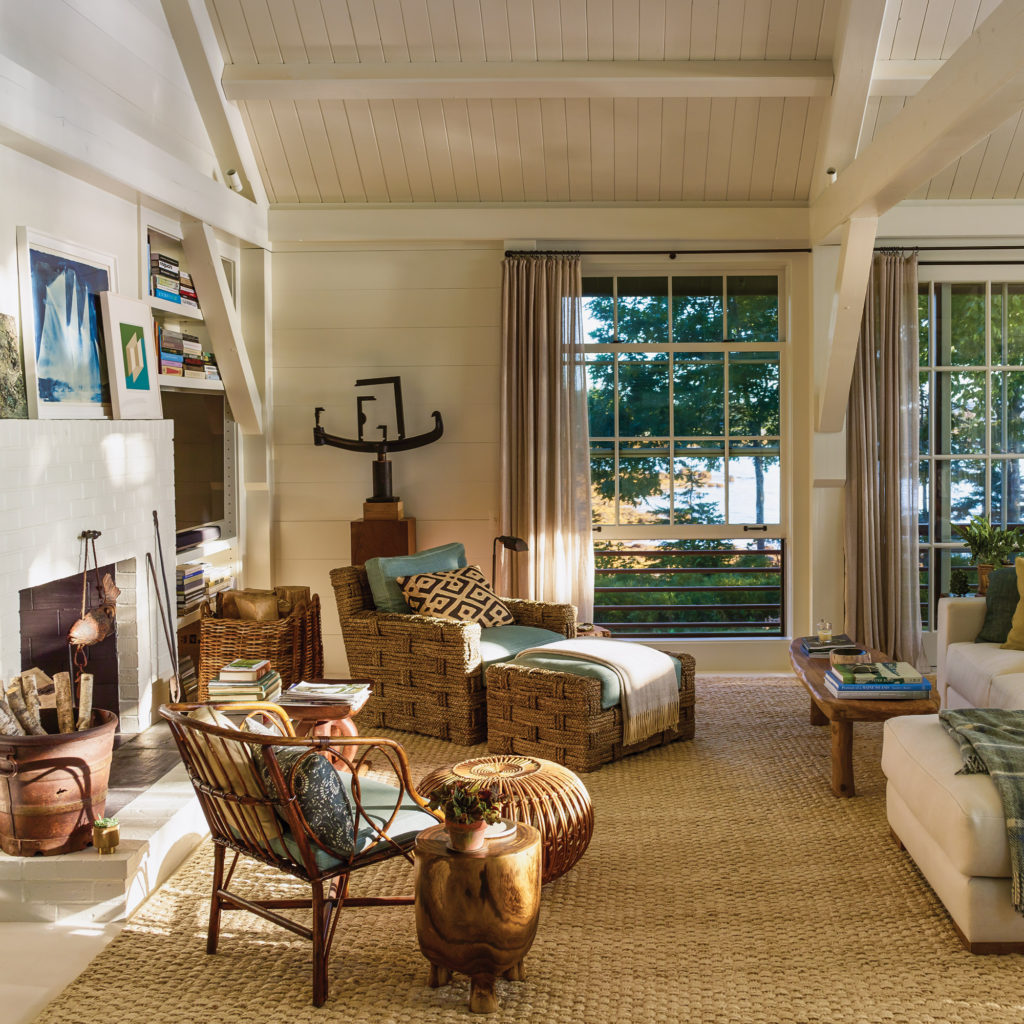 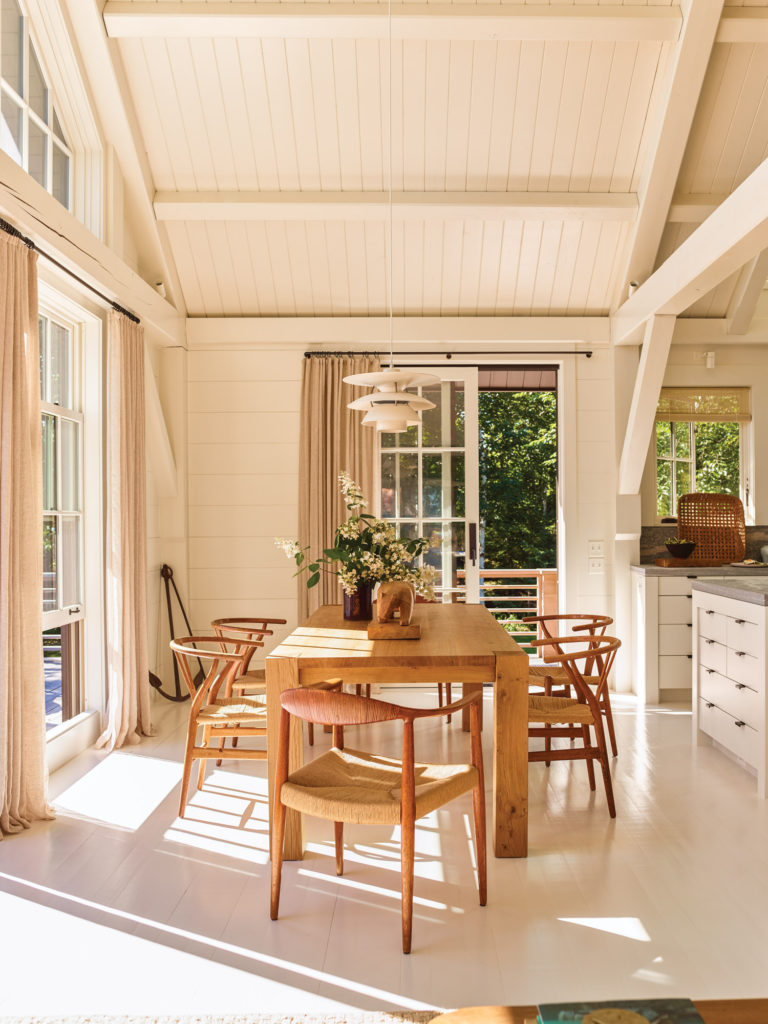 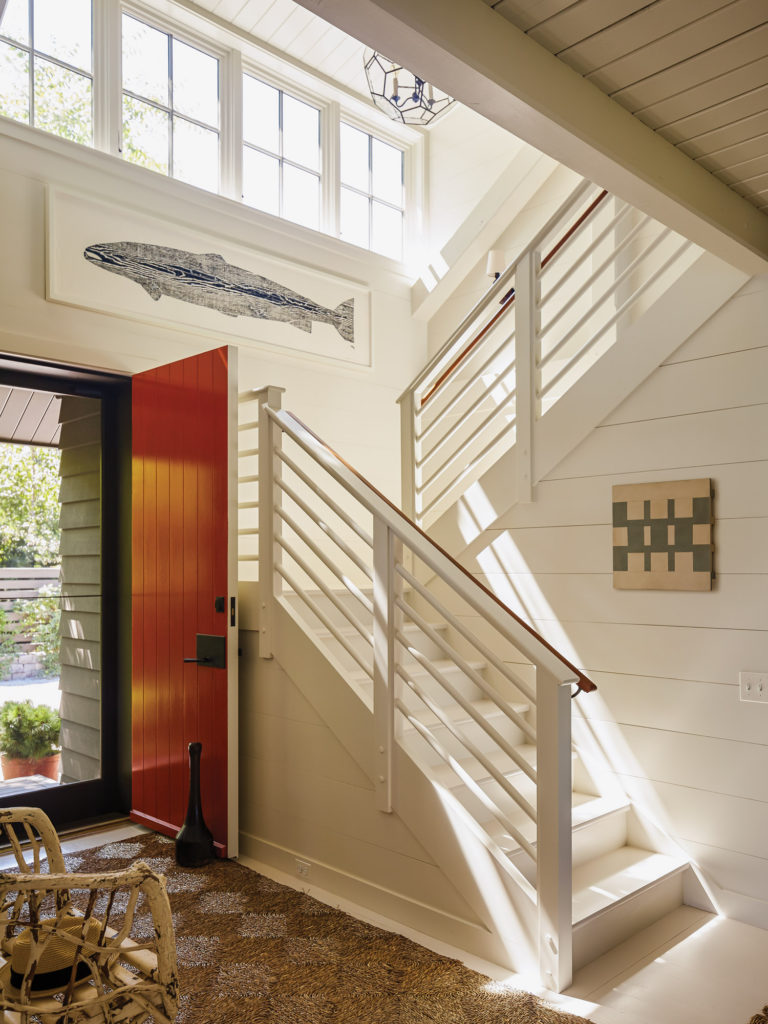 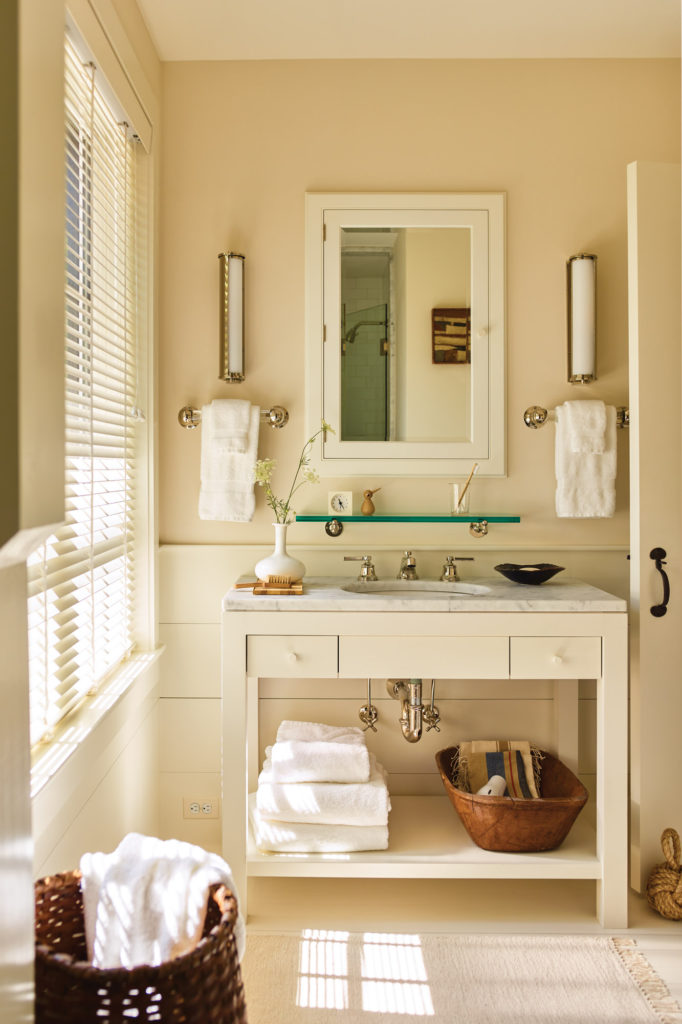 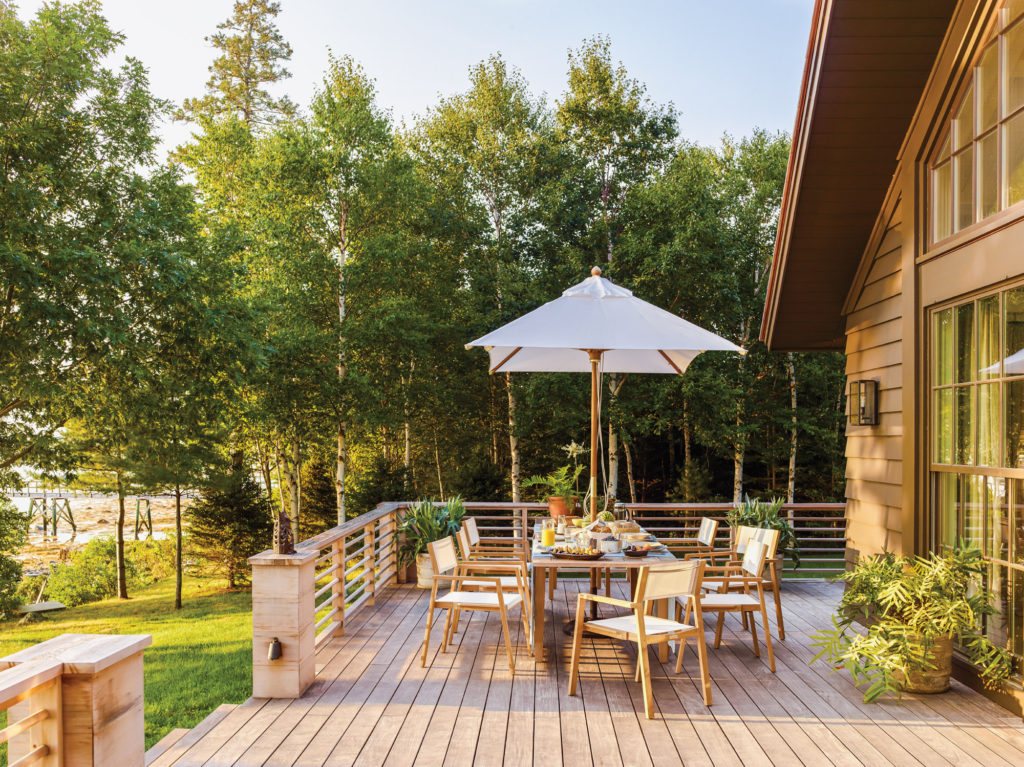 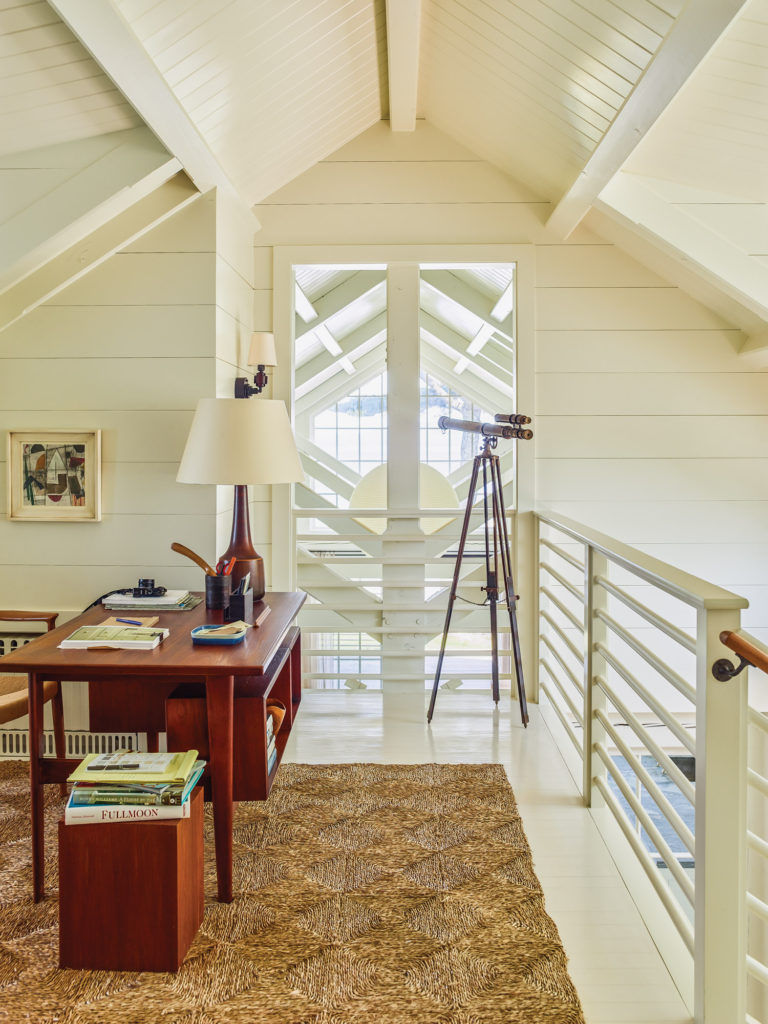 “Maine is known for its granite,” Schafer says. “To make it feel even more earthy, it was wire-brushed for a slightly rustic texture, to accentuate the materiality of it. When you see it from above, it looks watery.”

To make the spaces cozy, Schafer arranged the furniture in intimate, back-to-back settings. “One of the groupings is organized around the view to the sea, for the daytime,” he says. “The other is focused on the original brick fireplace and is intended to be a gathering place in the evening.”

To create a cohesive space, Schafer, in collaboration with color consultant Eve Ashcraft of New York City, selected a subtle tone of white with, he says, “the warmth of fresh milk.”

The white floors, walls, and ceilings “maximize the effects of the magnificent Maine sunlight and moonlight and accentuate the surrounding landscape,” Schafer says, adding that they make the space “light, airy, and focused on the outside.”

Painted in pale, watery blues and greens, the bedrooms play off the white used in the main rooms. The furnishings, a collection of vintage Mid-century Modern Scandinavian pieces and case goods, are mixed with new custom pieces.

Schafer designed the beds, each of which is different. A set has hand-woven rush-seat headboards; one is upholstered in an African-motif fabric; another is finished in white lacquer. The main bed is what Schafer describes as a “poor man’s four- poster,” and is outfitted with beigey linen draperies that are hung from the ceiling.

Schafer also created an office with a water view, under the upstairs dormer, and a tiny first-floor library/den with a fireplace, built-in bookcases, and walls made of oak plywood brushed to mimic the effects of age.

“Maine can be foggy and damp even in summer,” he says, “so this is a place to snuggle into.”

His renovations—which won a 2018 Bulfinch Award from the Institute of Classical Architecture & Art for New England —have so transformed the place that Schafer says he looks forward to spending more time here each summer, with his wife and two teenagers.