Until he married Kelly and they moved to New Hampshire, Russell Mann, who grew up in New Mexico, had encountered only 20th-century houses. Kelly Mann is a New Englander with a lifelong passion for historic architecture. She took her husband to visit Strawbery Banke, Deerfield Village, and old houses open to the public.

“I’ve always been drawn to things of the American Colonial period,” says Kelly, an artist who has worked in different media. (Russell is a dentist.) “I wanted to live in an old house. But after thinking it through, Russell and I decided to build an energy-efficient home with the look of an original.”

The dream began with a ten-acre piece of land in rural New Hampshire. Atop a hill overlooking the country lane, they built a two-and-a-half-storey country Georgian with a steep roof, narrow-exposure clapboards, 12-over-12 window sash, and a pilaster-flanked front entry inspired by the houses of Deerfield and the Connecticut River Valley.

“We didn’t want the house to be too rustic, like some of the really old Saltboxes we’d toured,” Kelly says. “I like symmetry…I wanted the house to face the approach from the lane.”

Russell adds, “I wanted a three-car garage and energy efficiency. And I wanted the house to be very well built.”

Their wish list was culled from the 18th through the 21st centuries. It started to look feasible when the couple found historical house plans from Classic Colonial Homes, the western Massachusetts company founded by the late Lloyd Kirley and headed by his son Lance. The company’s lead designer, Nick Arieta, explains that meticulous historical detailing is combined with modern living spaces and energy efficiency in all their designs.

The Manns hired builder Russ Cooke of Bedford, New Hampshire, to erect the new 3,400-square-foot house according to the design called Granby Colonial. The house is accompanied by a cupola-crowned barn functioning as a three-car garage. An ell connecting the two buildings encloses a historical space the owners call the Gathering Room.

Classic Colonial Homes provided the envelope, the front door, and the layout of the rooms. The Manns finished the interior with their choices: six-inch-wide oak floorboards, multi-light windows, and special finishes. They chose a traditional configuration with the dining room opening to the center hall and the kitchen. The kitchen flows into the paneled Gathering Room, which connects to the garage through a mudroom, above which is Kelly’s photography studio. A large downstairs room, which might function as a living room in other circumstances, houses Kelly’s costume-design study and is filled with fabrics, pattern-making equipment, and a sewing machine. The central staircase leads up to three bedrooms.

“This house is very modern, it’s tight and efficient,” Russell says. “But it has an old feel.” The rough-plastered walls are historical, yet they cover high-tech foam insulation. A modern heating and cooling system brings year-round comfort, a sprinkler system peace of mind.

Walls are hung with personality-filled portraits painted by Kelly in 18th-century fashion (her children were often the subjects). Above the dining-room wainscot, she painted a landscape mural inspired by the work of Rufus Porter. Furnishings are simple and restrained, with one exception: a gorgeous reproduction of a tall, tiger-maple secretary.

“Our friend Brian Vaillancourt made it; it took him four years,” Russell explains. “It’s modeled after an original by John Townsend.”

Another piece by Vaillancourt, a mahogany pie-crust tea table, stands in a corner of the front hall. Both Kelly and Russell love these pieces and the house. “I was late coming to this,” Russell says. “It’s because of Kelly I developed a liking for things Colonial, and it’s ongoing.”

A New Artistic Passion
Homeowner Kelly Mann is an artist who over the years has painted, photographed, stenciled, and stitched. At one point, she painted 18th-century-style portraits through her company A Brush with History.

Now a new passion occupies her time. Kelly is studying for a master’s degree in historic costume design. The field caters to costume collectors, living-history museums, and historical re-enactors. “Costume design brings together my love of history and my long preoccupation with using my hands, and I’m learning new things,” Kelly says as she presents the dress, corset, and stomacher of an 18th-century outfit. “There is no better way to learn the intricacies of period style than to study what people wore.”

“Baths and kitchens are hard [to design],” Kelly Mann says. “How far do you take period detailing?” In her kitchen, Kelly balanced stainless-steel appliances with soapstone and dark red cabinets. “I wanted a red kitchen because I thought it would look warm,” she says.

The kitchen is indeed a warm, period-inspired room with a furnished look. It is functional in plan and amenities. Character comes from the simple painted cabinets made by New Hampshire’s Crown Point Cabinetry. Wide-plank flooring carries over from other rooms. Soapstone is ideal for a New England kitchen, and was used here for countertops and the big, deep sink.

A favorite piece in the room is the authentic reproduction Townsend tall secretary made by Brian Vaillancourt. It flanks a brick hearth surrounded by a Georgian paneled wall.

The bathroom, too, marries luxury with period ambience. A slipper tub big enough for soaking has old fashioned appeal in a room lit by a reproduction chandelier and sconces. The slate floor is as practical as it is traditional. 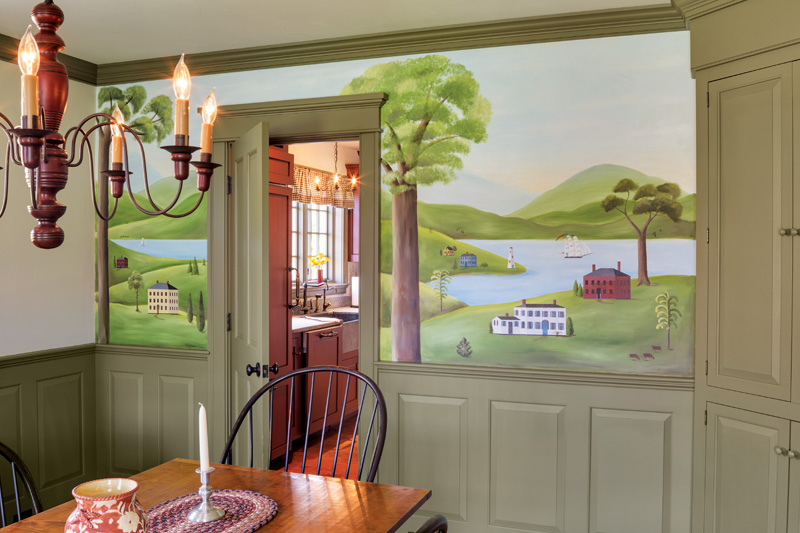 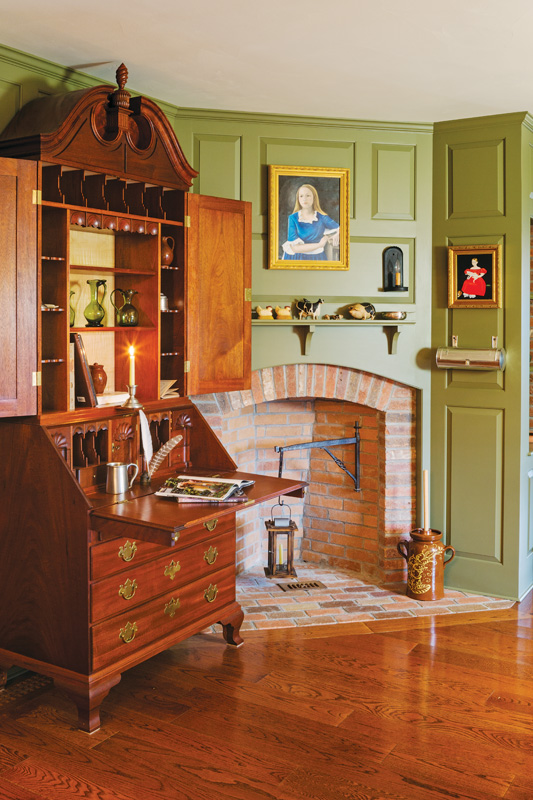 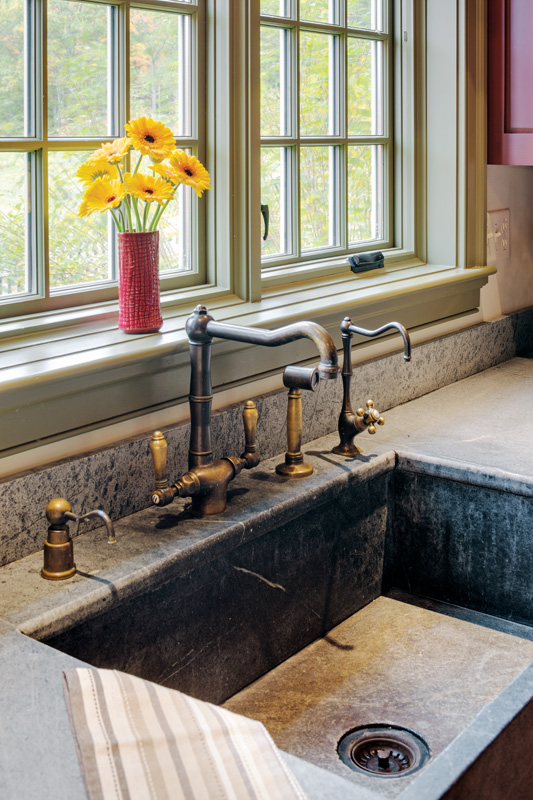 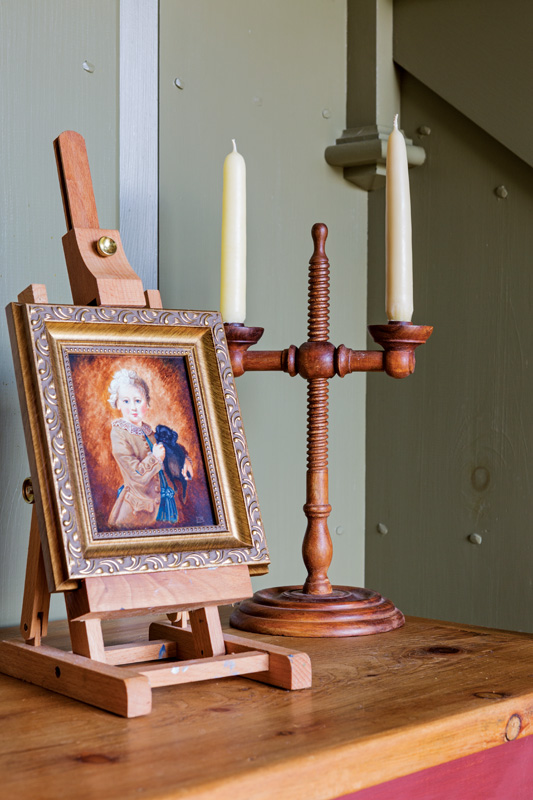