These two are purists. They took a handsome but neglected house and, over 12 years working nights and weekends, created a superbly authentic interior. Rosario Scalia is the researcher who made sure their designs, materials, and methods were traditional. (He also did the specialty painting, and he designed and sewed all of the curtains.) Acting as chief craftsman, Francesco D’Arro fabricated roomfuls of millwork. Judging from this project, it looks as if the two are professional restorers. In fact, D’Arro is a civil litigation attorney in private practice in Philadelphia, and Scalia is a cardiovascular research scientist.

Despite a fire that destroyed the township’s deed records, the two found through surviving plot plans that the house dates to after 1901 but before 1913. It is built of Pennsylvania mica schist; it’s not clear whether the stone was ever exposed. The yellow finish today is not paint, but rather a tinted lime wash over a layer of lime mortar. (The materials were purchased from Limeworks, a company specializing in historic masonry structures.) Only the staircase and mantel were original to the house at the time of purchase in 2000. With those cues, and after meticulous study, the pair added decorative moldings, raised panels, chair rails and wainscoting, and pediments over doorways. Outside, they replaced inappropriate nailed-on, louvered shutters with functional, paneled shutters. Everything was milled and fabricated on site. 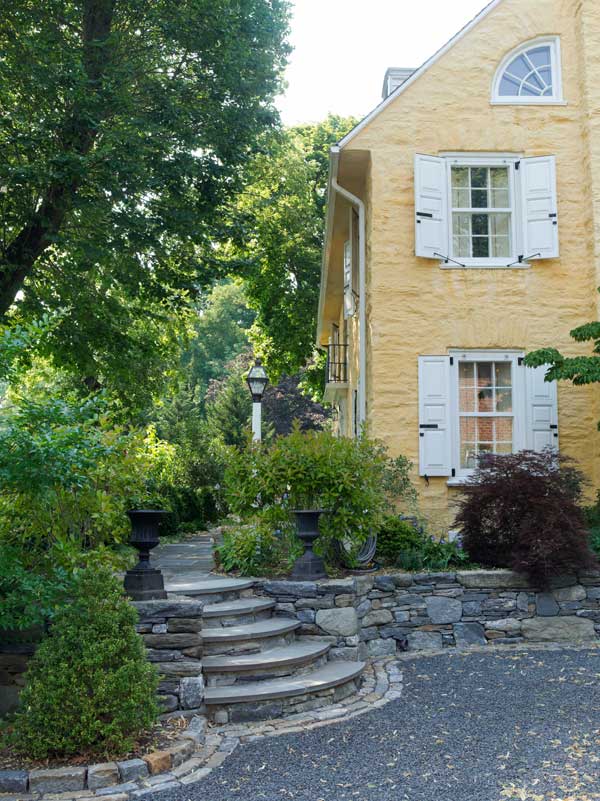 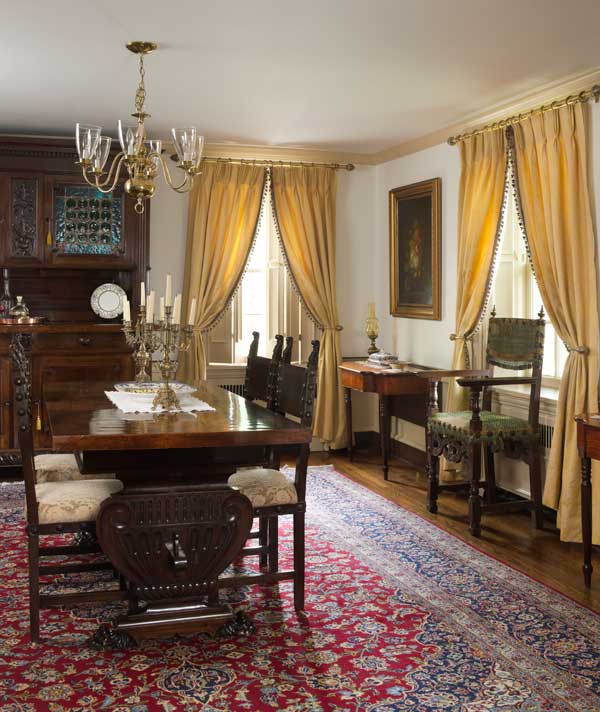 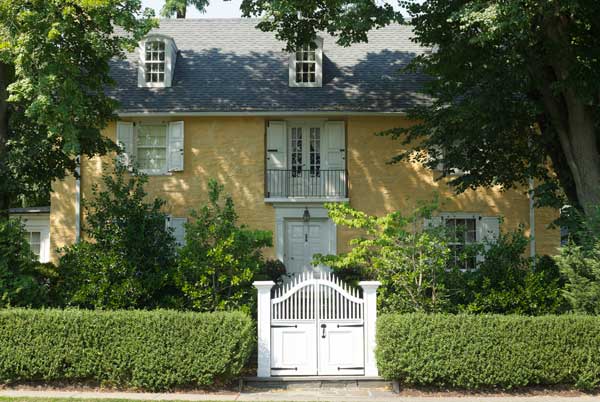 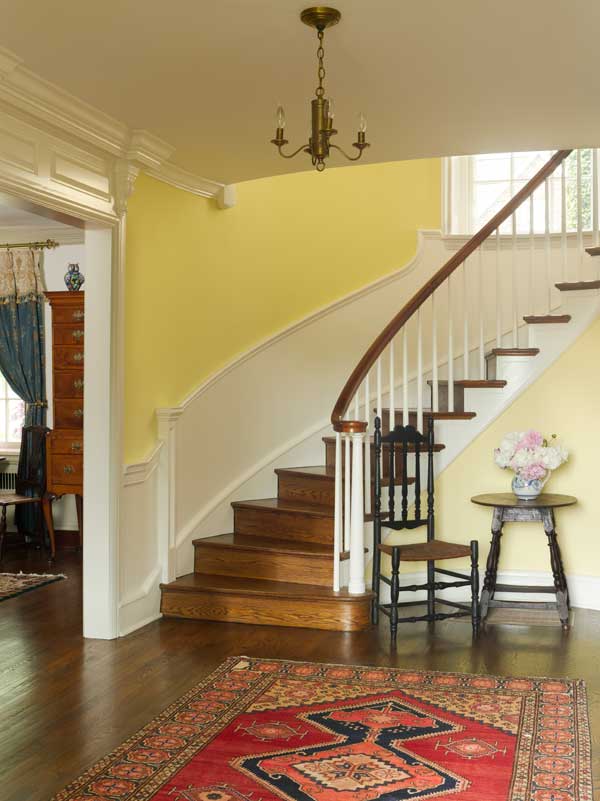 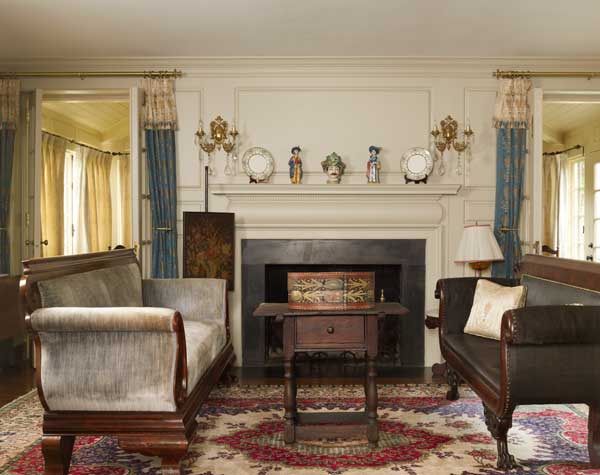 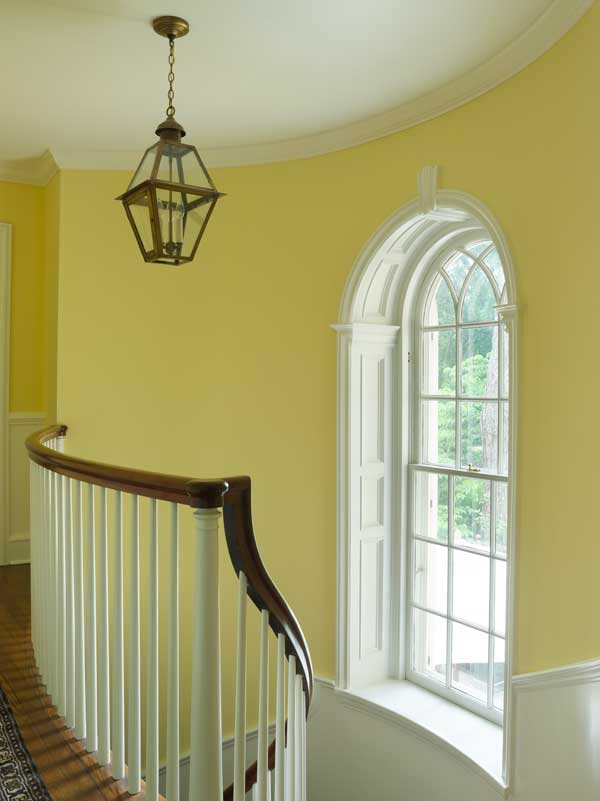 The kitchen had been remodeled in the late 1970s with a white vinyl floor, laminated countertops, fluorescent shop lighting, and boxy appliances. Today the floor is reclaimed white oak; the countertops reclaimed chestnut. The unique built-in cupboard is also chestnut—most of the boards were discards in a mud puddle at the lumberyard, but they had just the right amount of worm and nail holes. Another, freestanding cupboard was rescued from a built-in ripped out by a neighbor; Francesco salvaged the doors, two drawer fronts, and the wide pull-out cutting board to rebuild it as a two-piece step-back cupboard. Rosario finished both pieces with real milk paint. The new wall paint is a simulated whitewash with a sandy grit finish, applied with a wide brush to approximate traditional lime wash.

The sun porch was another complex project, one that took three years. The men tore out a drop ceiling and added woodwork and casement windows. Francesco spent at least 300 hours stripping away the lime wash and crumbling mortar on the schist wall. He experimented with sandblasting, chemical strippers, and pneumatic chisels, but all standard techniques were ineffective or damaging to the stone. Finally, he used an air hammer with a needle scaler attachment—a slow process. Repointing was done with an appropriate mix of hydraulic lime, sand, and water—no Portland cement.

The furniture is authentic to the period represented in the house, with the exception of the ca. 1850 Renaissance Revival dining room set that came from Brescia in northern Italy. The sofa and wingback chairs in the sun porch are reproductions, but everything else is antique. “We moved into the house with two mattresses on the floor,” D’Arro says. “We acquired one piece at a time, from auctions and antiques dealers.

“Early Homes and Old-House Interiors were very helpful,” he continues, “inspiring us with ideas and also providing a super resource for the paints, hardware, and materials we used.” And they’re going to do it again. After purchasing a 1690 house that they plan to restore, D’Arro and Scalia put this one up for sale. Its next owners are lucky indeed.

Folk Art in a Reproduction Saltbox

A Country Federal Keeps with Tradition