“I come to party,” explains a volunteer at Clingstone’s annual work weekend. The sentiment perfectly captures the vibe of those who have gathered here to help maintain this 106-year-old, 23-room summer manse sitting on a rocky outcrop in Narragansett Bay.

Although the annual early-summer event is dubbed a “work weekend,” stories fly of bikini-clad painting crews in years past, and of owner Henry Wood’s fondness for mooning passing tour boats. After four decades of work weekends, a sense of playfulness permeates the bohemian-style restoration scene.

“My childhood summers were spent sailing in Narragansett Bay, and as my father and I would sail by Clingstone, he’d say, ‘There’s your crazy cousin’s house,’” recalls Henry, a retired architect who oversaw the construction of Boston’s City Hall and Hynes Convention Center. Years later, on a weekend drive to see Vermont’s fall colors with his first wife, Joan (herself a residential architect), Henry discovered that Clingstone was on the market. The couple purchased the house in 1961 for $3,600, a total that amounted to the back taxes owed on the property. 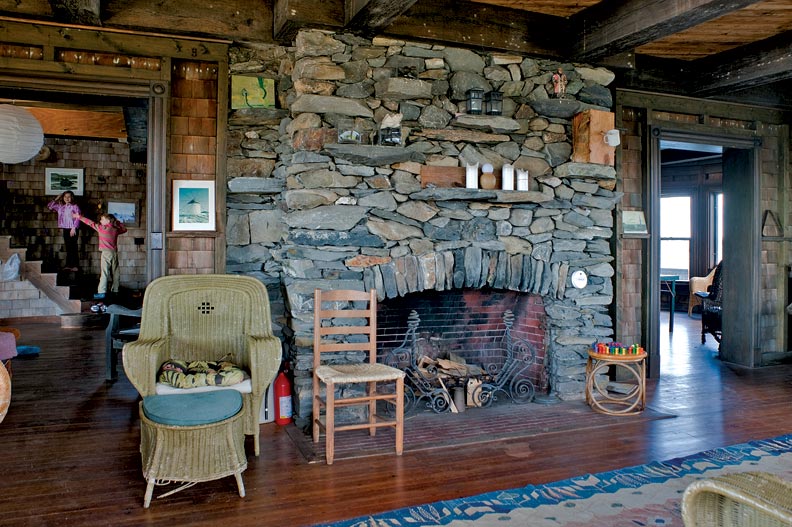 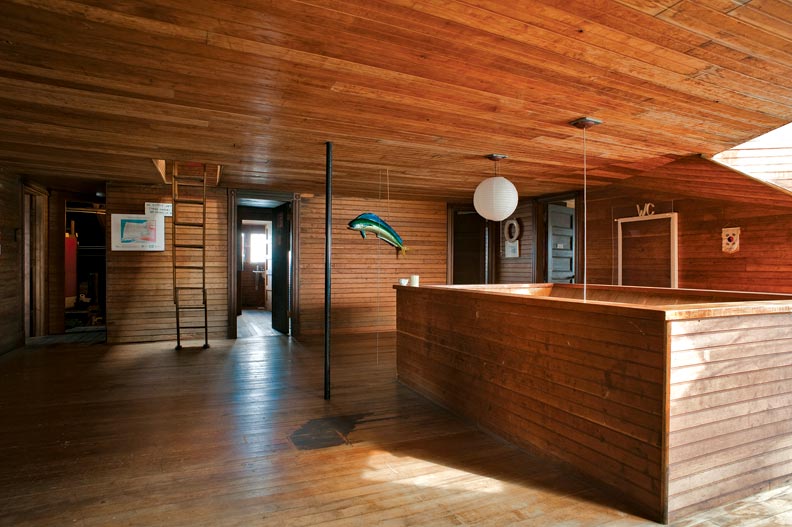 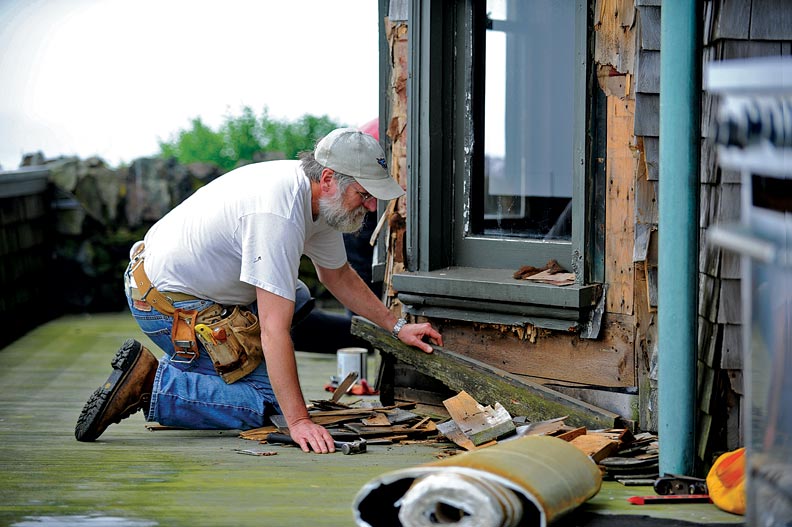 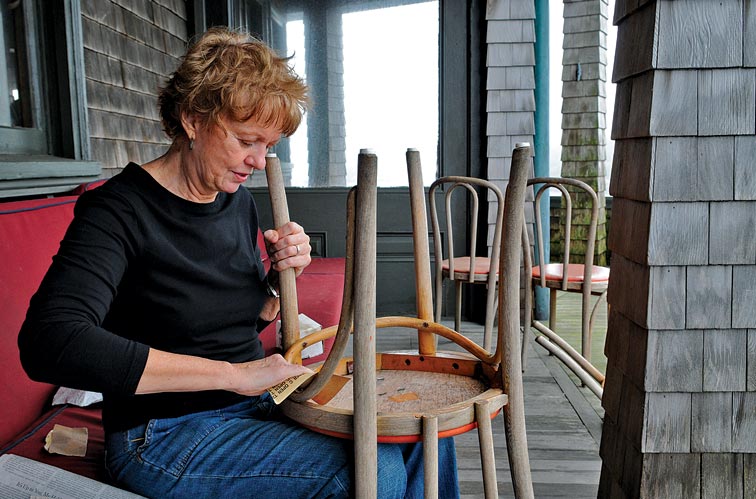 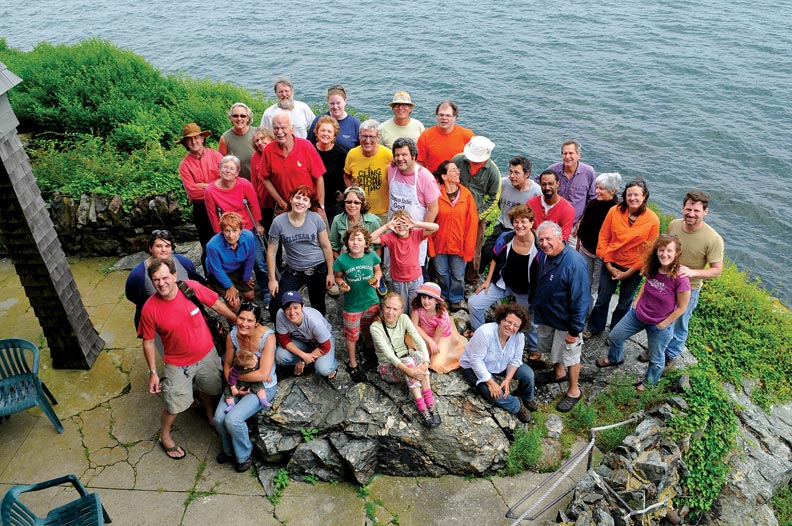 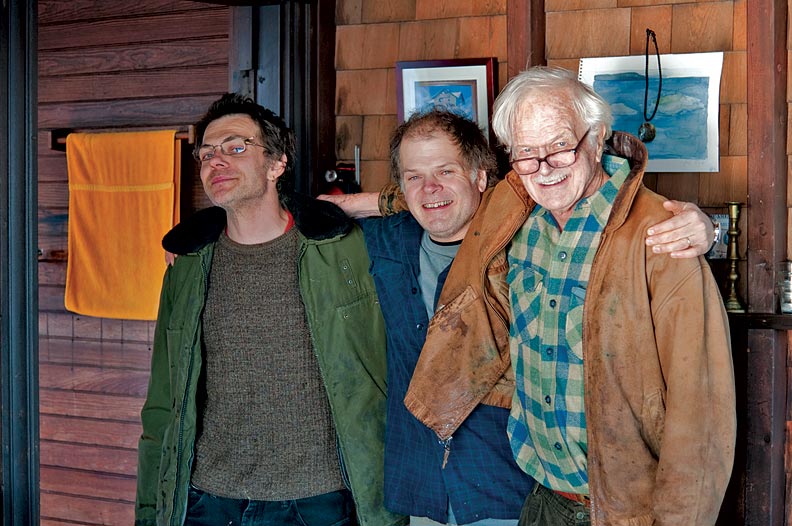 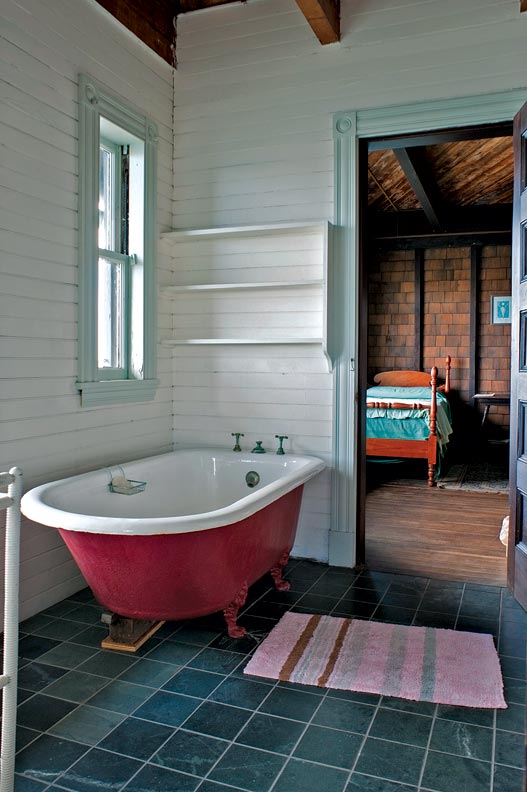 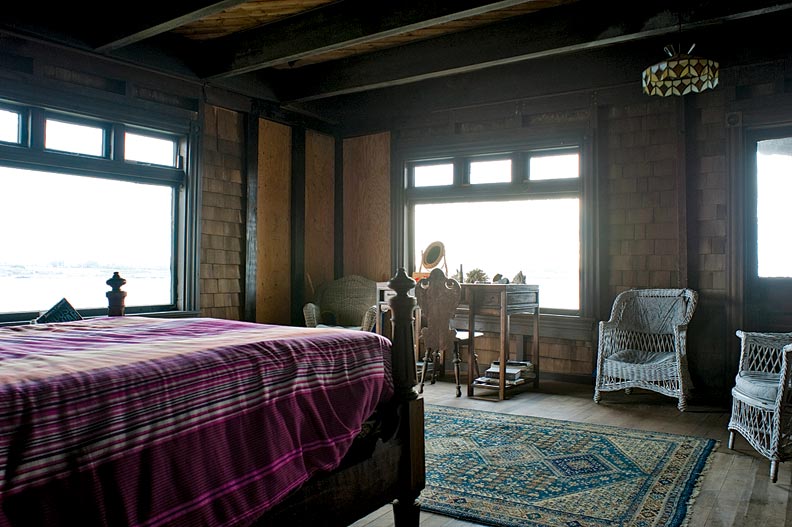 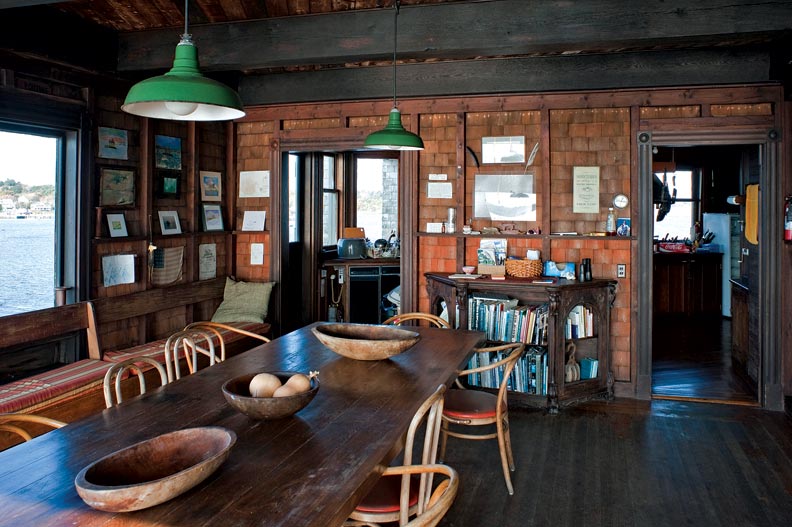 The original owner, J. S. Lovering Wharton—a distant relative of Henry’s—had abandoned it after the Great Hurricane of 1938. It had since become a haven for vandals, a far cry from the well-heeled summer guests it once entertained. When the Woods bought the house, it had no running water or electricity, and was missing all 65 plate glass windows, as well as much of the exterior decking and part of its slate roof. “You could stand in the basement and look up through the house to the sky,” recalls Henry. Graffiti filled the home’s walls, and most architectural elements that could be easily hauled to a boat had been pilfered.

Henry was determined to resurrect the old wreck. “During the 1960s there were a lot of urban renewal projects going on around Boston,” he says, “and I would salvage architectural items from buildings being torn down in the South End—glass from old store-fronts, doorknobs from brownstones, factory lights from a city meat-packing plant, and lumber flooring from a supermarket.”

His first project at Clingstone involved patching the roof. After a few years of tackling projects with the help of just a few close friends, Henry came up with the idea of extending an invitation to a wider circle of family, friends, and the just plain curious to help preserve the monstrous mansion. “We held our first official work weekend around 1970,” Henry says. Guests partook in a plethora of home fix-it projects within the 48-hour span, ranging anywhere from painting window sash to replacing rotting decking to fixing plumbing.

The tradition continues today, with each work weekend’s projects covering the needs of the moment. The draw to such a laborious event is the house itself. Built on a small granite outcropping just off Jamestown, the 10,000-square-foot house, which nearly covers the surface of the craggy rock, offers intoxicating 360-degree ocean views; some workers camp out there overnight. “The house’s sight lines seem to reveal perfect seascape paintings, each framed through 4′ x 10′ plate glass windows,” says Josh Wood, Henry’s son.

Jamestown Historical Society records offer conflicting stories on how the mansion came into being. One tale describes the house as being originally planned for marine artist William Trost Richards; he abandoned the project and sold the plans to J.S. Lovering Wharton, who modified the design, making the house smaller and adding a breakwater. The other story claims Wharton designed the original plans, and Richards offered the financial backing to build the structure.

Josh reveals the story he and his family have come to know: Wharton, a close friend and neighbor of Richards’, collaborated with him on the design and put his house project in Richards’ name to get around local gossip—Wharton was from the staunch Philadelphia Quaker society, and building a summer house on a rock was considered more than a little unusual. “Newport architect J. D. Johnston, a friend of Wharton’s, helped with window placement and such,” adds Henry.

“Clingstone is a remarkable example of the Shingle Style,” Henry says. Josh likens the three-and-a-half-story house, which was overbuilt to withstand New England’s harsh coastal winds, to a ship. Its structural system consists of heavy oak timber frame, and it is clad in cedar shingles inside and out. Massive stone fireplaces dominate the main hall, living room, and ping-pong room (originally a billiard room). Air circulates through a series of ventilating hatches built above and below the inoperable plate glass windows. The curved central staircase, which has no rails, leads up to 11 bedrooms. Decks—some with railings, some without—surround the house.

Today, Clingstone gets its water and electricity through sustainable methods—12 solar panels and a windmill generate power, a 3,000-gallon cistern collects rainwater, and five composting toilets service the water closets. “The house’s stone foundation came right from the island, and the dining table was made from planks from the original cistern,” says Henry. “You can’t get more green than that.” The interior is more reminiscent of a bachelor’s shack than a grand summer cottage; Henry has furnished the house with a hodgepodge of pieces collected over the years. The place is littered with nautical charts and historical photos; the library holds legions of seafaring, cooking, and architectural books.

Henry, now in his 80s, likens the work weekend to an old-fashioned barn raising. It’s definitely family-centric, with his three grown sons, Paul, Josh, and Daniel, managing various projects. At last year’s event, among sailboats gliding under the Newport Bridge and cormorants soaring through the air, Dan, an artist and printer, shuttled volunteers over from Jamestown’s Dumplings Pier on a motored 10-man skiff, skirting rocks and buoys on the five-minute trip. Volunteers arrived to find Henry’s eight-page chore sign-up sheet among the papers scattered on the dining table, with tasks for the weekend broken into columns detailing the level of priority, description, location, and number of crew needed for each task. Projects included re-shingling window bays, installing a rope handrail, cleaning windows, and planting containers.

The scene was hectic as volunteers—many close friends of the Woods—chose their chores and got to work. Blaine Paxton of New Hampshire, who has been coming for five or six years, signed up to repair and paint exterior windows. Kathy Kahn, Josh’s mother-in-law, volunteered for the first time. Polly Nelson, a mystery writer from New Jersey, saw the weekend posted on the Internet and thought, “What a great old house—who wouldn’t want to see this?” She offered up her specialty—refinishing furniture—and stayed overnight in the house, hoping to get ideas for her next story. Alec Ferguson, a longtime friend with carpentry skills, replaced a carrying beam in the main hall that had been eaten away by insects.

Although all of the volunteers stayed busy, the mood remained relaxed and jovial. Josh reflects on the weekend: “It’s like our own little socialist world—I love the community aspect to the weekend. My family has great friends—I would not trade this experience for anything.” Henry agrees. With more than 24,000 volunteer man-hours recorded, he is thankful for the friends who have helped him preserve the old summer manse in the Bay.

A Bungalow With Its Original Integrity