Many people ask architect John Day the age of his Greek Revival house that sits on a historic farmstead in Medfield, Massachusetts. They assume the 3,000-square-foot residence with its traditional framing and detailed trim is a mid-1800s farmhouse.

But nothing could be further from the truth. Day, an architect with the Boston firm LDa Architecture & Interiors, built the house himself, finishing in 2012. And the bright-yellow door isn’t the only thing distinctly modern about the three-bed, three-and-a-half-bath home. Day included many up-to-date architectural and construction elements like radiant heat, spray-foam insulation, EnergyStar appliances, and LED lights. 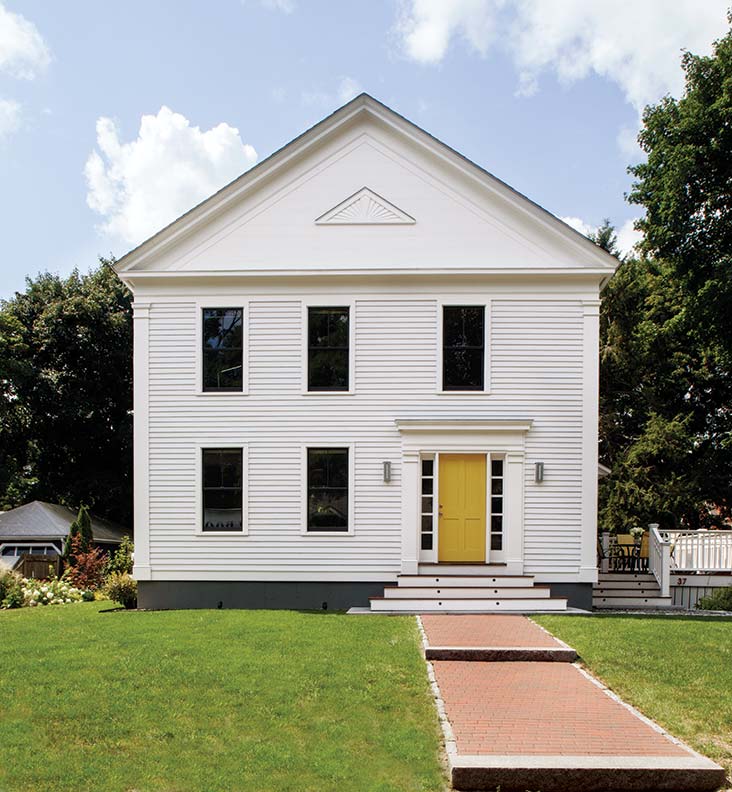 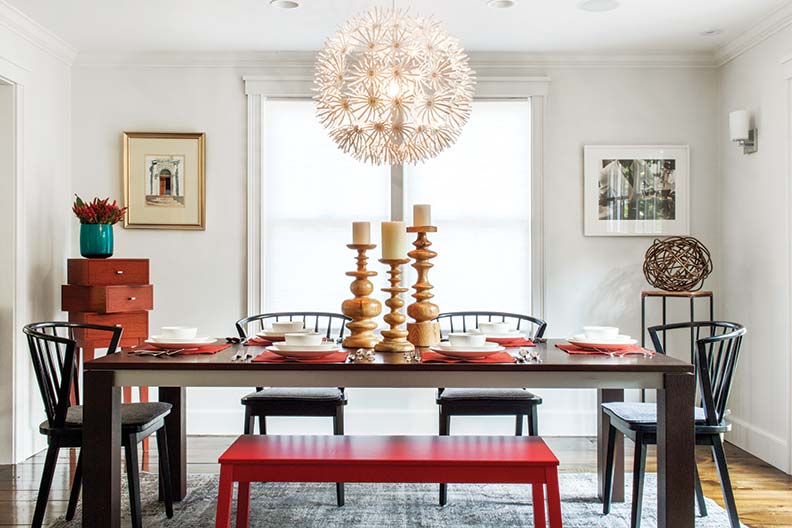 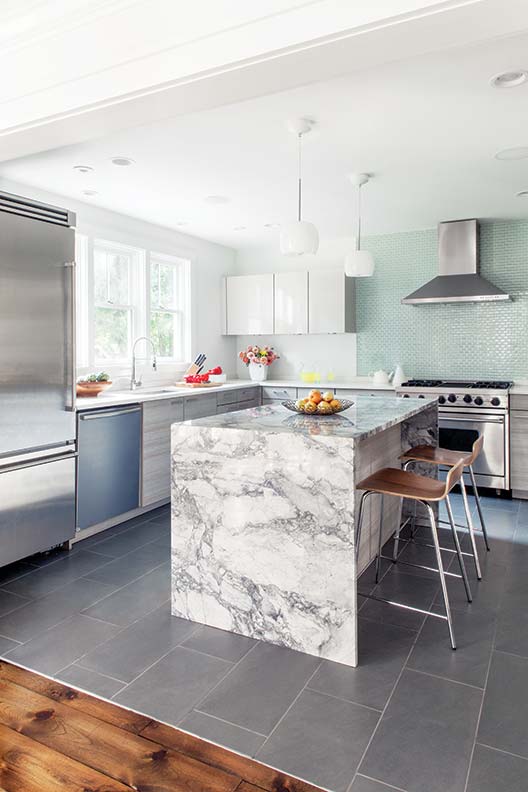 He also inserted a modern-day sensibility into the interior—both in the layout and décor—to make the space more accommodating to family life and contemporary aesthetics. “It’s a very traditional look, but we went a very nontraditional route in building it,” he says. “We wanted it to look old, but we wanted it to live new.”

Day contracted Middlebury, Vermont-based Connor Homes, a company that specializes in designing and providing components for the construction of new old houses that join classic American architecture with modern techniques and amenities. “We wanted to explore—how do you build a family-oriented, pretty, sensible historic home in a high-quality method?” says Day.

Connor sent flatbed trucks with the house’s components, some of which, like wall sections, entryways, and cornices, came pre-assembled. Day hired subcontractors to assemble the pieces onsite and to install a sleek, contemporary Poggenpohl kitchen. Then Day himself finished the rest, including flooring and tiling.

This process allowed the team to easily create a high-quality and precisely historic structure at a cost much lower than a custom design. An additional benefit was the relative lack of waste the process produced, enough to fill just one Dumpster.

The question of how much waste to tolerate in building his dream home was one Day encountered early in the planning process. On the property when the family bought it was a Cape Cod that they planned to expand into a larger home. But the house was in worse shape than they expected, presenting a choice between doing a complete overhaul or demolishing the structure to start afresh with new construction. “The least green thing you can do is tear an old house down and throw it in a Dumpster,” says Day.

But the building was in bad shape. And, despite his love of old houses, Day knew that they often come with limitations that can impinge on the activities of modern life. He wanted his home to include elements like a mudroom, a finished basement, and heightened ceilings. A customized interior in a new house would provide the flexibility for which he was looking.

Day kept the exterior design of Connor’s home intact: a simple rectangle with a large outdoor deck for a connection to the landscape. Inside, he made changes to better accommodate family life, such as inserting an ultra-modern kitchen and placing the laundry room on the first floor. He added a mudroom and modified the main entryway with a waterfall front step.

The main level contains a half-bath, dining room, and large living room in addition to the kitchen and laundry room. In the finished basement are a theater and family room, a guest room, and a full bath. The top floor consists of three bedrooms with walk-in closets and two full baths.

The 5′-tall windows are overscaled to let in more light, and the ceilings are 9′ tall to create a sense of spaciousness. “They look proportionate from the outside, but light floods in,” says Day. “It’s a modern twist on a historic model.”

The interior decor is a contemporary style on a backdrop of traditional materials: wide reclaimed pine floors, traditional crown molding and casework, and white walls. Day focused his design on texture and color, with contrasting patterns and splashes of red, orange, and yellow to complement a smooth palette of gray, cool blue, and black. The eclectic art hanging throughout the house also presents a contrast to the traditional aesthetic of the structure.

The result of melding antique design with modern needs and tastes is a handsome, livable home that fits Day’s family well. Working with Connor Homes to join historical accuracy, custom design, factory-built efficiency, and sweat equity meant that Day was able to get the house he envisioned at a cost that would work.

He and his family live with all the conveniences of modern life but get the benefits of owning a stately homage to tradition. “I like that it looks old,” Days says. “I like that people ask us how old it is.”