This 4,000-square-foot barn is part of a historic three-building complex that includes an 1816 stone house and an 1851 schoolhouse. “When I first saw the barn,”says the wife, “I got very emotional. It was such a beautiful reminder of history, despite its condition. We put our heart and soul into the project.”

When she talks about the 1822 barn in upper Bucks County, Pennsylvania, you can feel this owner’s passion. She and her husband restored the building, transforming it into comfortable living space. As a family gathering spot, the stone building is the backdrop for new memories in the making for generations of blended family. The rural character of the area was also a draw. But it was the process of restoration that proved especially meaningful. 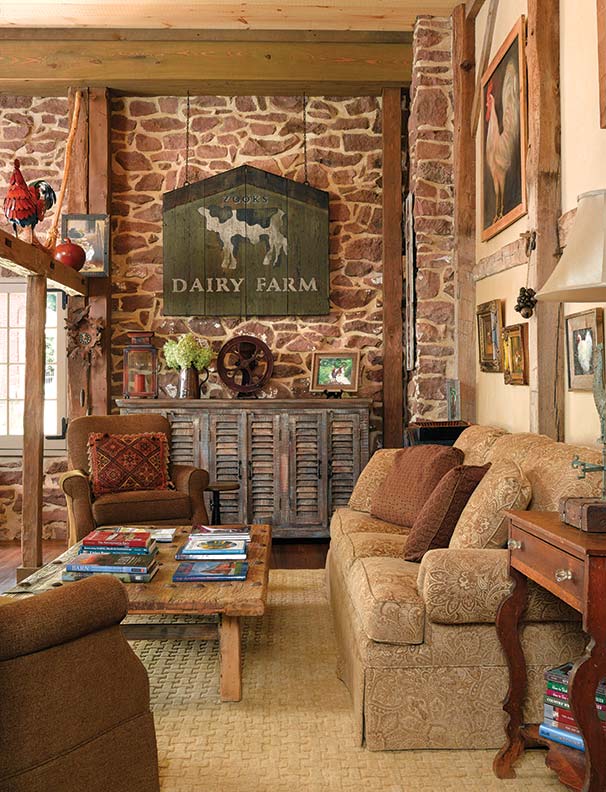 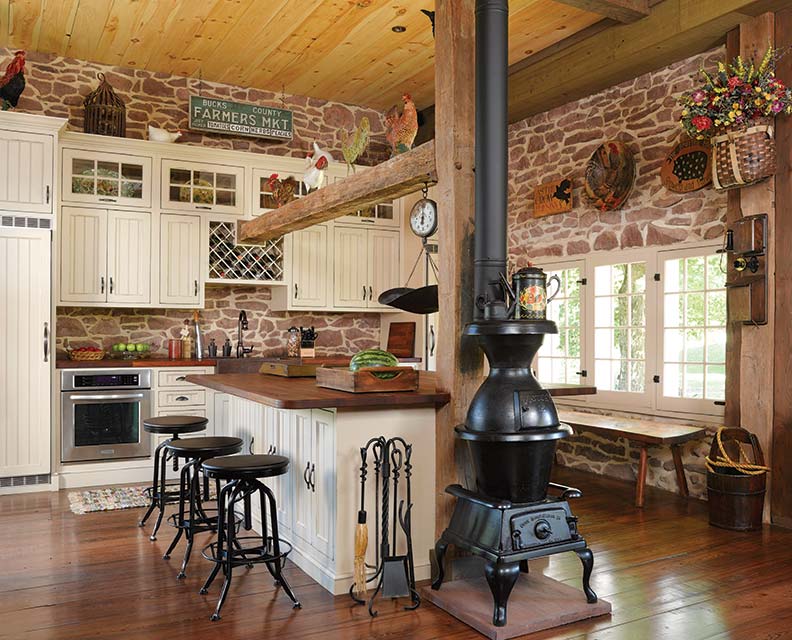 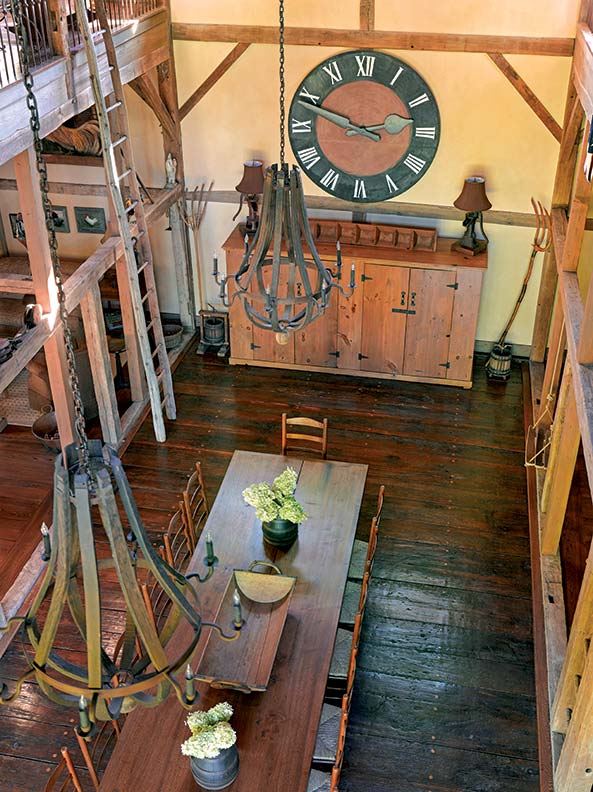 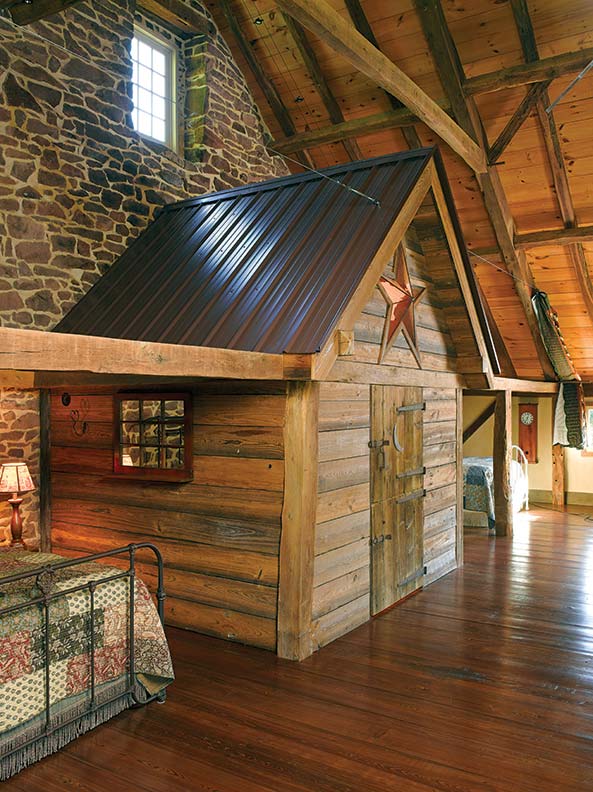 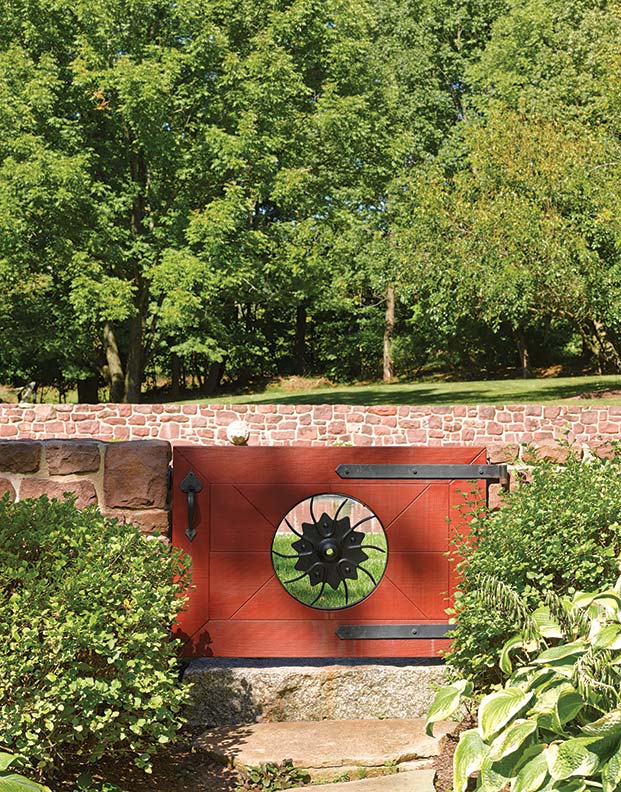 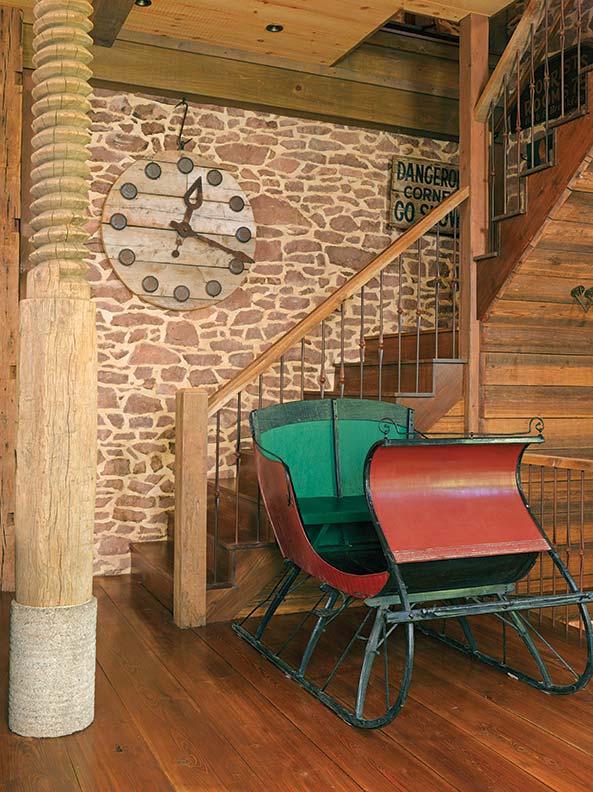 “It turned into an eight-year project that we worked on together—during which we learned more about each other,” she says. “It was a lot of work, but definitely worth it.”

The barn was constructed of a local Pennsylvania brown sedimentary stone known as red argillite. A bank barn (one built into a hill or with a ramp to allow ground-level accessibility on two levels), it was originally a dairy barn serving the family in the small stone farmhouse next door. In the 1940s, it was converted to house chickens instead of cows. By the time today’s owners saw it, the barn had stood unused for years. Its roof was full of holes, horsehair plaster was emerging from between the stones, and various sorts of wild animals lived inside.

The couple bought the house and the barn and, when the old schoolhouse went on the market three years later, they bought that, too. After years of restoration work, they can come here weekends and vacations, often with their children and grandchildren. The homeowner and her husband stay in the 1816 farmhouse, host big family meals in the barn, and put up extra guests in the schoolhouse.

“This area is still very rural; people live in houses built by their parents and grandparents,” she says. “Yet, there are stores and malls ten minutes away, and it takes us just an hour and a half to get here from our weekday home in New Jersey.”

The conversion to a family-friendly residence took considerable work. “First, we put on a new roof, then we repointed the entire exterior of the building,” the homeowner explains. “Our mason told us that one of the stone walls was within a year of collapsing. After dealing with the exterior, we repointed interior walls.”

The new owners installed running water, electricity, a septic system, heating, and air conditioning. They built and installed new windows and constructed stairs and lofts on the upper level of the wide-open space. They designed interior spaces around the existing posts, beams, and floor levels, and enclosed space only for the two bathrooms, one on each level.

“We did not drywall any of the walls because we wanted to keep it looking like a barn,” she explains. “There’s a step up from what used to be the threshing floor to the kitchen. We had to design the kitchen around the barn’s frame, which included incorporating a post when building the island, and designing the cabinets to accommodate a beam.

“In fact,” she continues, “the beam goes into a wine rack that’s above the sink. It is not centered, and that’s one of the elements I love for its quirky nature.”

She adds that she painted all the conduit wire dark brown to render it invisible. “It’s the little details that really make a difference.”

The homeowner prides herself on the fact that she and her husband restored and furnished their stone barn without the aid of either an architect or interior designer.

“It was our vision, our design sense and color scheme, etc.,” she says. “I was the general contractor and dealt directly with each craftsman. I was fortunate to have a great crew to work with, and a patient husband.” They took their time, scouring antiques shops for furnishings.

The owners came to appreciate the expertise of area craftsmen as they dealt with a structure long on history but short on finish. “Our carpenter, Kenneth Schuebel of Hellertown, built all the new windows. He then installed them, which became the bigger challenge in a big old structure where nothing is plumb and nothing is level.”

In nearby Quakertown, they found Jay Chaikin, who finds and saves pieces of old barns and industrial buildings; he helped when they needed to replace a few rotten structural elements. And “our plasterer, Jason Butler, made the new surfaces look old, which was exactly what we wanted.”

The barn interior is now comfortably furnished for family gatherings. What was once the threshing floor is the dining room, one step down from the adjoining kitchen. The centrally located living room is comfortable with upholstered furniture. To honor the barn’s years as a poultry house, the homeowner has created a whimsical theme with collectibles and art that have a chicken and rooster motif. The dairy barn history gets a few nods. Clocks, of special interest to the homeowner, are a striking element of the interior design.

A favorite feature is the upstairs bathroom. Situated between two loft bedrooms, it takes the form of an outhouse, complete with gabled metal roof and a crescent moon cut into the Dutch door. A large star made by a local glass artist fills the gable above the outhouse door. An actual wooden three-seat outhouse bench became the frame for the mirror!