There was a certain down-home charm to the tiny tin-roofed cabin surrounded by the green, rolling hills of Lowndesboro, Alabama. A couple with three grown children had owned the 3,000-acre farmland for several years, and they had pitched in to help their farmhands build the humble house. In the beginning, it more than served their needs. But as they spent more time at this weekend/summer country retreat that’s a two-hour drive from their primary residence in Birmingham, they discovered that, aesthetically and architecturally, their home-away-from-home left much to be desired. Measuring only 30 feet by 30 feet, the cabin’s size was small, and yet their ideas for entertaining friends and family were large.

When they commissioned architect Jeffrey Dungan of Mountain Brook, Alabama, to renovate and restore the house, he suggested tearing it down so they could start from scratch. “But it had too much sentimental value for them to do that,” says Dungan, who has fond memories of growing up on a small farm. “So the challenge became to capture the spirit of the old farmhouse and add a loose assimilation of ancillary buildings that convey the feeling of a village that grew up around it through the years.” The changes he made increased the size of the living spaces to over 5,000 square feet.

“The owners are nature lovers, and they wanted to extend the indoor space into the outdoors,” he says. “They come here to fish in the lakes, to ride horses, and to hunt deer. It’s also a working forestry farm.”

“It’s a soulful place —there’s nothing fancy about it; it’s all about comfort and enjoying the people you’re with,” says architect Jeffrey Dungan.

Dungan, a two-time Palladio Awards winner, clad the cabin in cypress and shingled the roof with cedar shakes. He and his team removed the existing interior cabinetry but saved the basic shape of the rooms and the vaulted ceilings as well as most of the original flooring, interior planking, and fieldstone fireplace and chimney. “We also painted the wood and added antique oak beams, trusses, and other reclaimed pieces,” he says. “We had to shore up the chimney because it was leaning, but we wanted to keep it as a memento.”

Dungan opened up the original house to the outdoors. In the living room, he added two pairs of French doors on each side of the fireplace and created a new screened porch that features a dining space and an outdoor fireplace. “On a chilly day in the fall, this is the ideal spot to sit and sip a libation or two and take in the views,” he says, adding that the farmhouse is in an idyllic setting complete with moss-draped trees.

He brought light into the living space with a dormer high in the vaulted ceiling of the original cabin, and moved and replaced the kitchen with a 1 ½-story, greenhouse-like glass box that’s larger than the original. 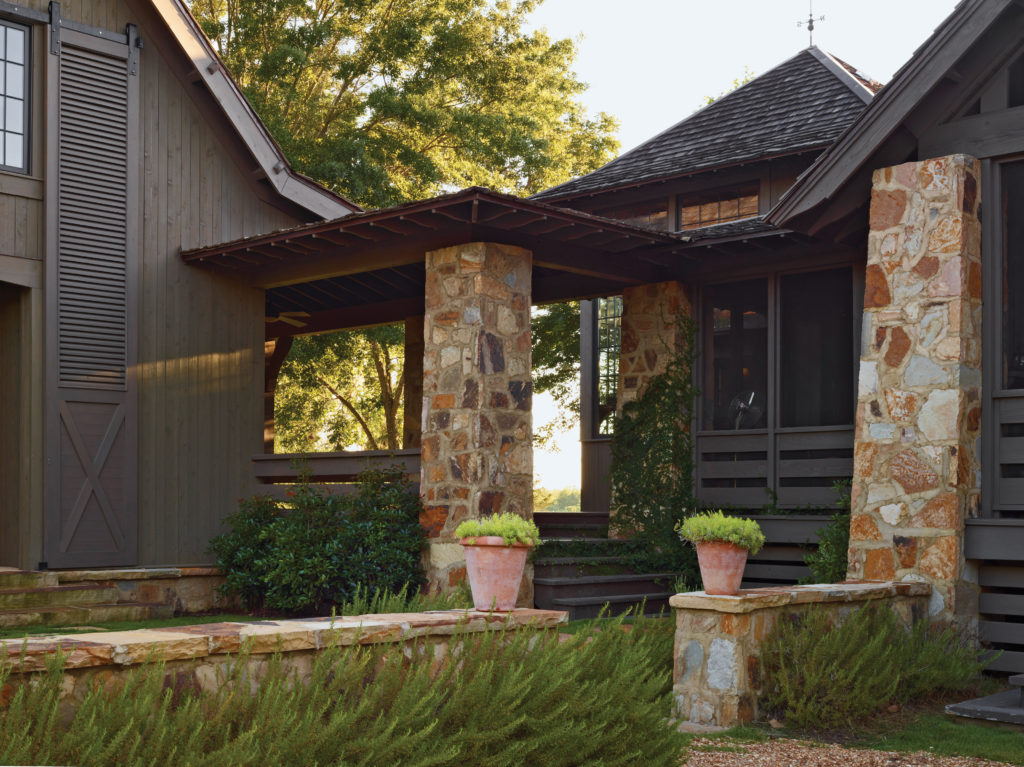 On one side of the house, Dungan added a master wing that has a shuttered sleeping porch. He also created what he calls a “bunk house,” a large vaulted living area with a small bar and inglenook fireplace that opens to a long porch. “No farm would be complete without such a large, wide-open space for big gatherings,” he says, adding that it’s the perfect place to view the sunsets.

Natural materials, notably cedar shakes, moss-rock, and fieldstone were selected to reference and reinforce the farmhouse’s bucolic setting. “We wove the existing and new structures together with wraparound porches, a classic Southern device,” he says. “The details of the railings take their cues from the ubiquitous horse fences surrounding the house and farm.”

Since the compound’s completion, Dungan has spent many weekends at the farmhouse. “We get together, cook and enjoy the indoors and the outdoors,” he says.

He and the owners always find it hard to leave such a peaceful setting. The farmhouse, which Dungan calls a “rambling and refined rustic retreat,” is a “soulful place,” he says. “There’s nothing fancy about it; it’s all about comfort and enjoying the people you’re with.”

Spending time there, he adds, “is as good as it gets.”