For a Santa Monica couple and their budding family, the chance to purchase a Craftsman-style home in a beach community of turn-of-the-century houses built atop sand dunes was the classic California dream. But more than a century after it was built, the cavernous 1903 dwelling was outdated and unrealistic for their needs, despite being set amid other Craftsman and Victorian-style homes, all built as vacation residences less than a block from the ocean.

Overhauled by Homesley, interiors are awash in a tranquil palette of white, charcoal, and blue-grays, complemented by natural textures including handwoven Roman shades.

With a friend’s referral, the couple looked to Los Angeles-based architect Erik K. Evens, partner at KAA Design Group, and interior designer Alana Homesley for restoration and design expertise. “These types of homes are a rarity on the Westside, because so many of them had been torn down,” explains Evens. “But this one [in the Ocean Park District] was very much in its original state—of kind of forlorn on the inside and really dark and dreary. It hadn’t been updated in decades and was substandard with respect to bathrooms, kitchen facilities, and mechanical systems. We felt lucky to get our hands on it and bring it back to life.”

During the initial stages of the vision process, the couple had a specific checklist of criteria: extra room for their growing family (maximize the bedroom count and create more modern and gracious bathrooms); a functional kitchen for cooking and entertaining; and they wanted it to feel like a beach house.

“They had been living in the house for a little while but had done nothing to it,” recalls Evens of the now nearly 3,000-square-foot home. “When I first saw it, I thought, Let’s restore it to what it was. We could have retained the dark, chocolatey character, but after spending time with our clients we realized that was the wrong approach. We decided to do a fresh take, make the house lighter and brighter and less ponderous in its material qualities. I think we did it in a way that was respectful to the character and still made it their house.”

The bungalow bath is gracious with white- painted, horizontal-laid board walls and a built-in shelf alcove that creates a storage nook near the old clawfoot tub. 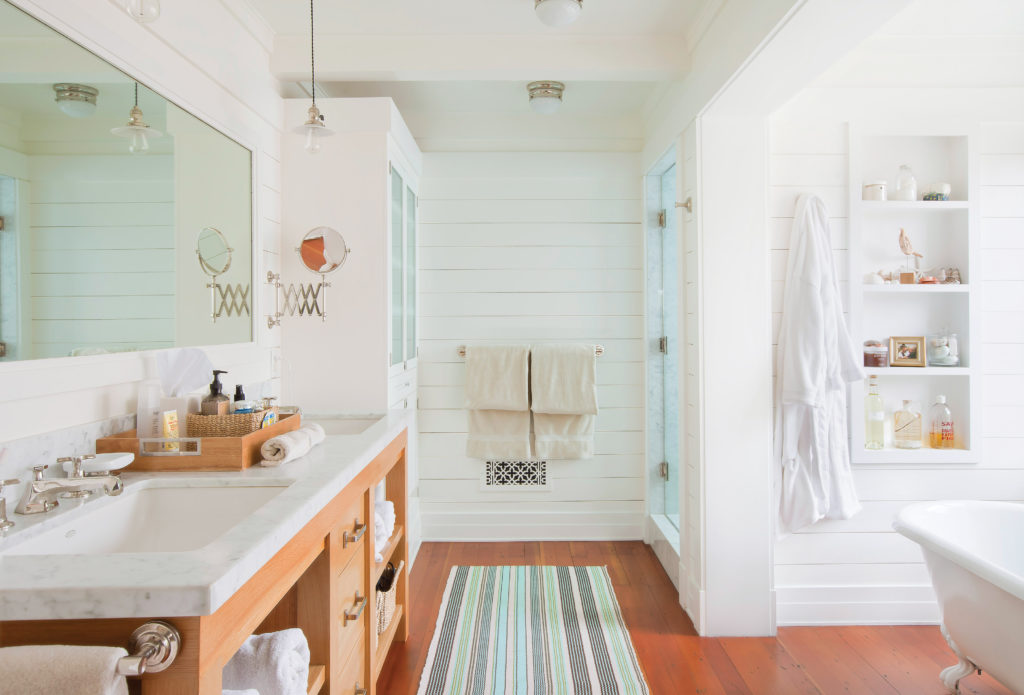 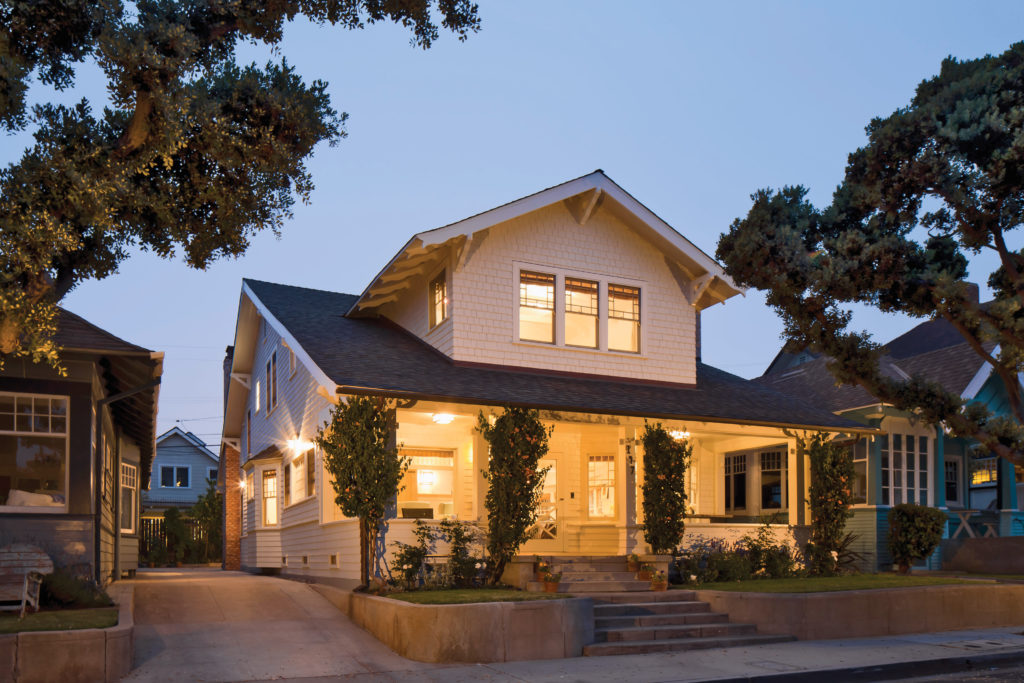 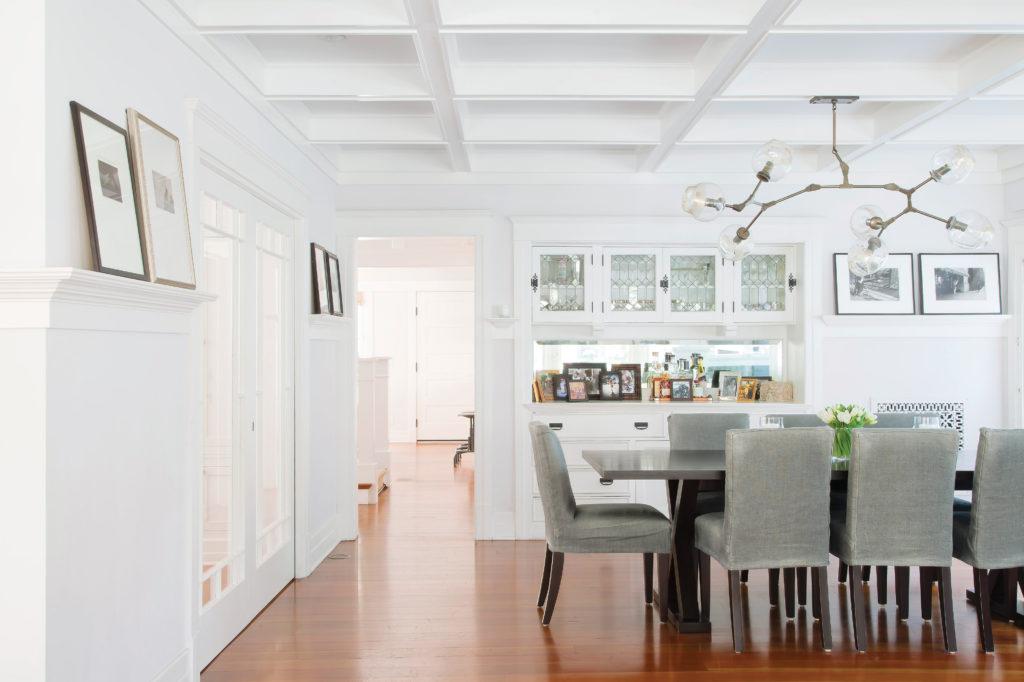 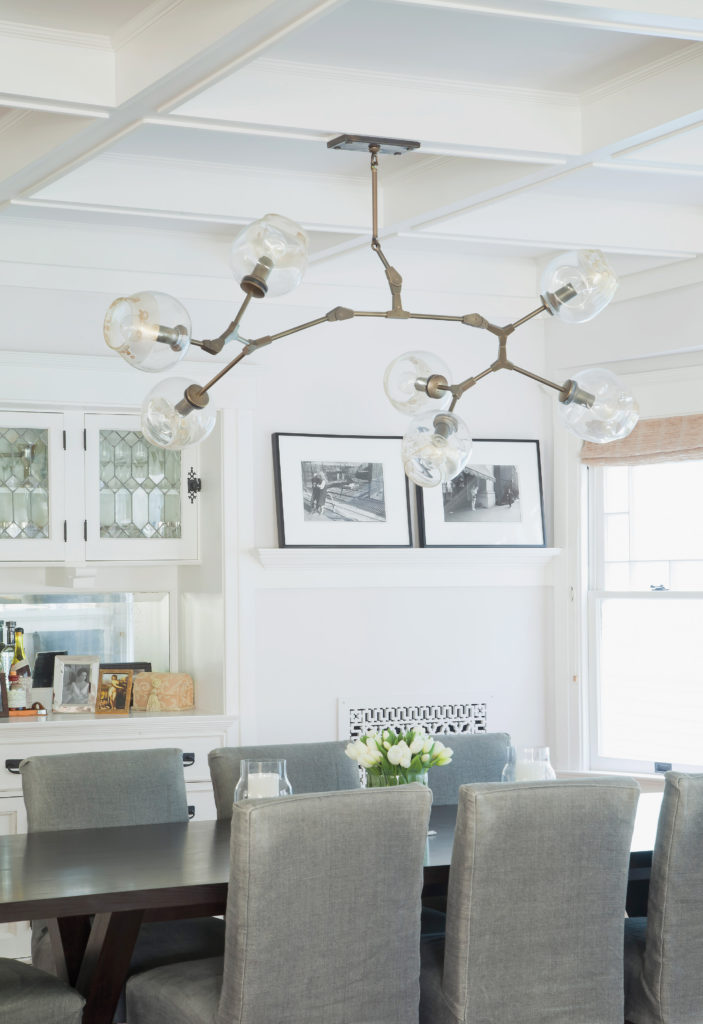 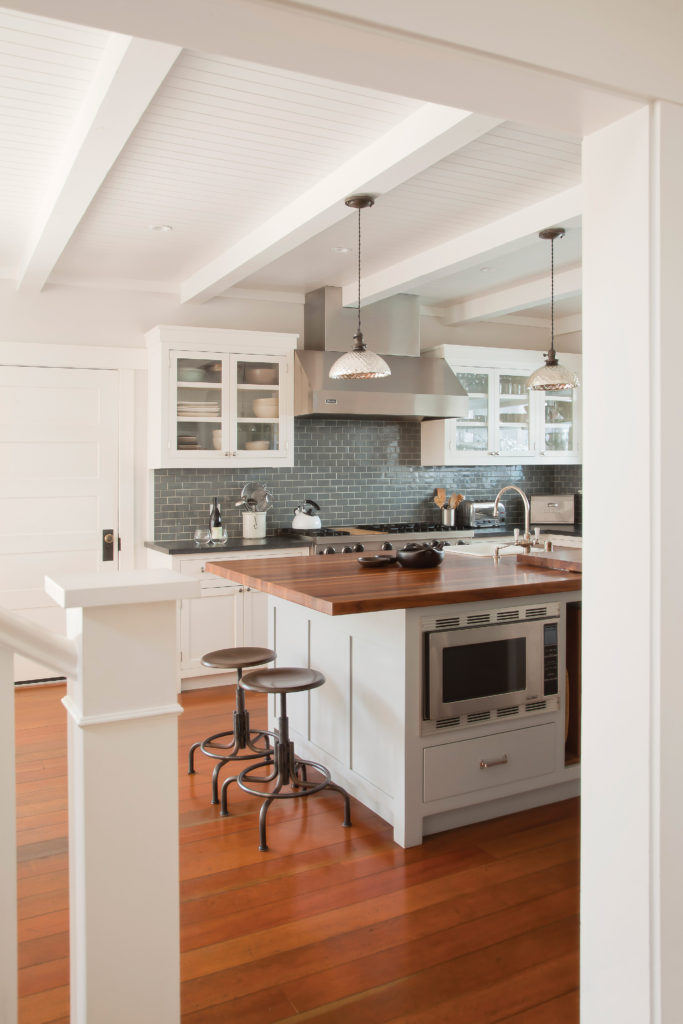 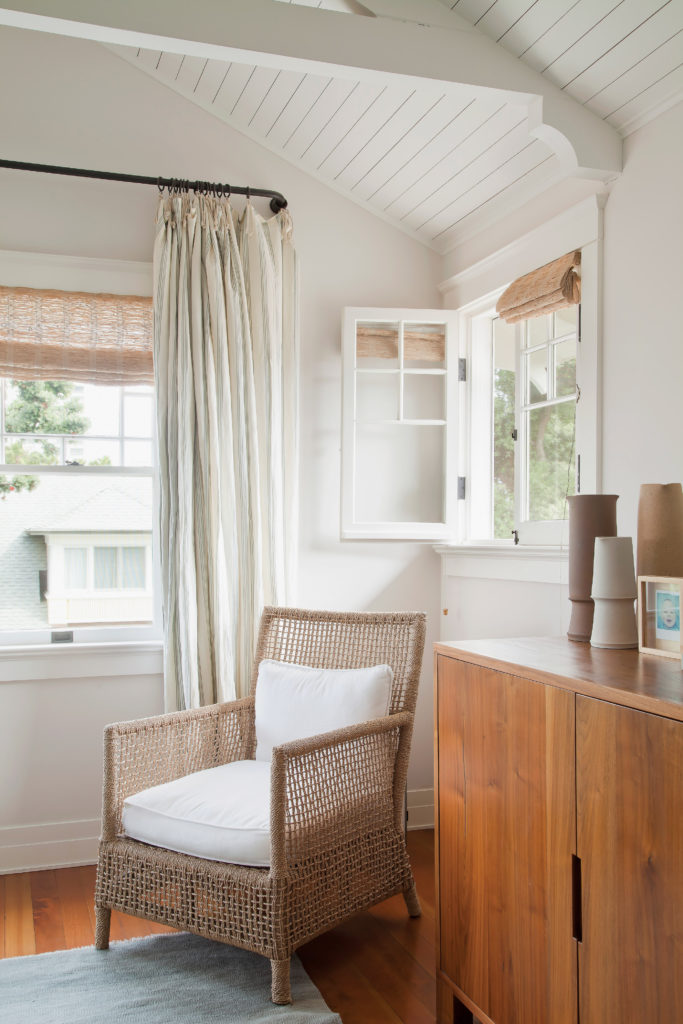 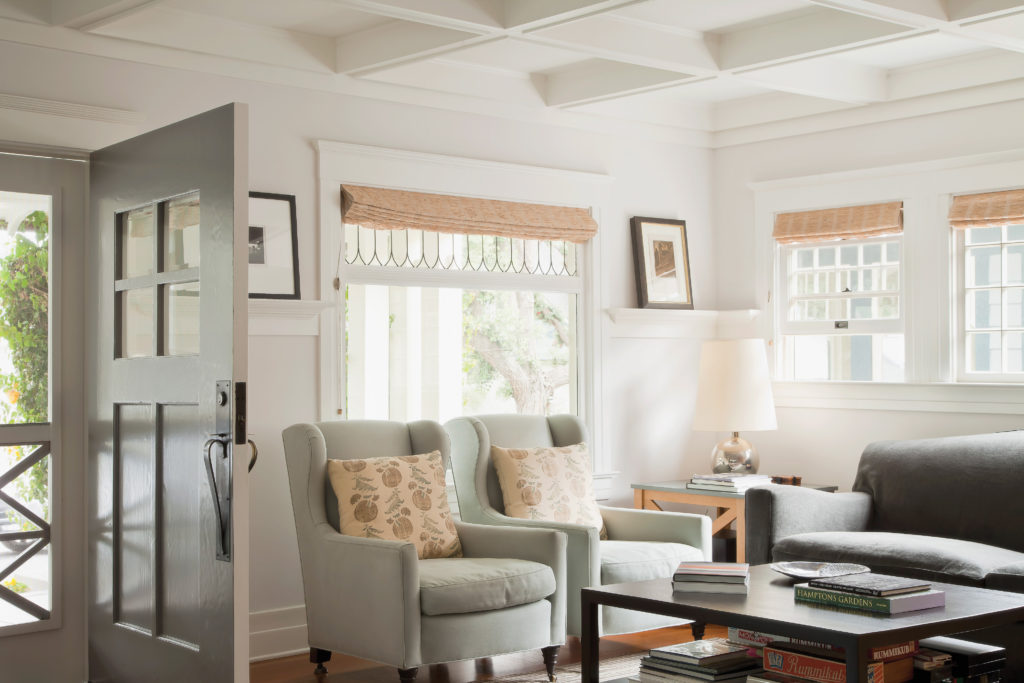 Before the 18-month-long renovation, the house was taken all the way down to the frame on the outside. The program included adding a bedroom, revamping the kitchen, substituting new windows (many originals were salvaged and retained, and the new ones mimic them), restoring and replicating Douglas fir floors, reroofing to match the original roof, and rebuilding the chimneys. Evens and his team completely reimagined the upper level to include four bedrooms and three baths. The lower level comprises the new kitchen, a new powder room, and a reworked stair hall. “The public spaces are largely original but painted white, and we kept the original cabinetry and beam work,” notes Evens.

The interiors overhauled by Homesley (who headed up the Interiors Studio at KAA Design Group before launching her own firm), are awash in a tranquil palette of whites and blue-grays complemented by natural textures including handwoven Roman shades by Conrad. “The clients were inspired by the simple and natural designs of homes found in the South of France, as well as modern Belgian farmhouses,” recounts Homesley, who traveled with the couple to New York City to visit showrooms such as Christian Liaigre, Wyeth, and ABC Carpet & Home. “They were drawn to slipcovered furniture and muted color palettes, and I was asked to incorporate more modern design elements and materials while still being respectful of the existing architecture.”

In the dining room, original design elements including a coffered ceiling, leaded-glass doors in a built-in buffet, and a picture rail (from which the couple’s photographs hang) were retained. Homesley chose a custom, oak “Courrier” dining table by Christian Liaigre paired with chairs slipcovered in a Rose Tarlow fabric. A seven-globe branching bubble chandelier by Lindsey Adelman completes the look. “The muted blue-gray tone of the linen slipcovers reminds me of a murky sea,” says Homesley, who calls the chandelier “the most surprising item in the home, as it is so modern and sculptural, a definite statement piece.”

In the kitchen, originally outfitted with laminate cabinets, key elements include vintage mercury-glass pendant lamps, a walnut butcher-block countertop, and a dark gray tiled backsplash. The living room sports a “Brousse” sofa by Christian Liaigre, custom-designed oak-and-metal side tables by Alana Homesley Interior Design, and a Mansour Modern flatweave kilim rug. Flanked by antique carriage lanterns, the fireplace surround is composed of Heath Ceramics tiles in Frost, which Homesley describes as “cheerful and fresh” for a beachy aesthetic that continues upstairs in the master bedroom with a rope-and-rattan lounge chair by Hollyhock.

The end result of long design hours and a carefully calculated combination of old-meets-new is a sparkling, light-filled residence fit for trips to the beach and gatherings with friends. “I just feel really happy about this project because we were able to take a house that had been more or less neglected for a long time and turn it into a lovely home for a lovely family,” says Evens.