Whether you call it “electric blue” or “painter’s-tape blue,” the startling hue that coated the front-parlor woodwork in Clark Mitchell and J.W. Brasher’s turn-of-the-century <a href=”http://www.oldhouseonline.com/american-foursquare/”>Foursquare</a> most definitely could not be called “period.”

The house had been built circa 1905 by renowned Dallas architect Otto Lang for himself and his family. But as the years passed, it changed hands many times as the once-thriving neighborhood around it fell to crime and decrepitude in the shadow of downtown Dallas’s rising skyscrapers.

When Clark and J.W. bought the house in 2004, it had been thoroughly remuddled. Originally a single-family home, it had been converted to an upstairs-downstairs rental duplex, with alterations to match: a second front door, a second-floor kitchen, a new room boxed in over the porch, and a staircase tacked onto the back. Its wood “teardrop” siding was cloaked in asbestos shingles. The house was in too woeful a state to inspire an initial rush of affection from its eventual owners. This romance unfolded in a more circuitous way.

Clark and J.W. had first fallen in love with a home of similar age in Munger Place, a planned community built in the early 20th century. That house, however, had such serious structural problems that a general contractor told them he could build a new house that looked old for half the price of fixing it. So Clark and J.W. did just that, purchasing a lot in the adjacent, more affordable Swiss Avenue neighborhood and designing a new-old house, inspired by J.W.’s grandmother’s West Texas home, where he fondly remembers family holiday gatherings.

The couple figured they would grow old in this home, but they couldn’t spend the rest of their lives looking at the sad old Lang house, which sat, neglected, across the street. So they bought that house, too, and set about restoring it. Their plan was to put both houses on the market and sell whichever one went first, then make the other one their home.

They had barely begun the restoration when a couple walking by struck up a conversation. Their contract on another house had just fallen through, and they lightheartedly asked how much Clark and J.W. wanted for the new-old house. Jokingly, the homeowners remember, they threw out a ridiculously high price. The couple went on their way, but, recalls J.W., they soon stopped walking, in serious discussion. They came back, and just like that, before it even hit the market, the new-old house had sold. The Lang house would be Clark and J.W.’s new domicile. 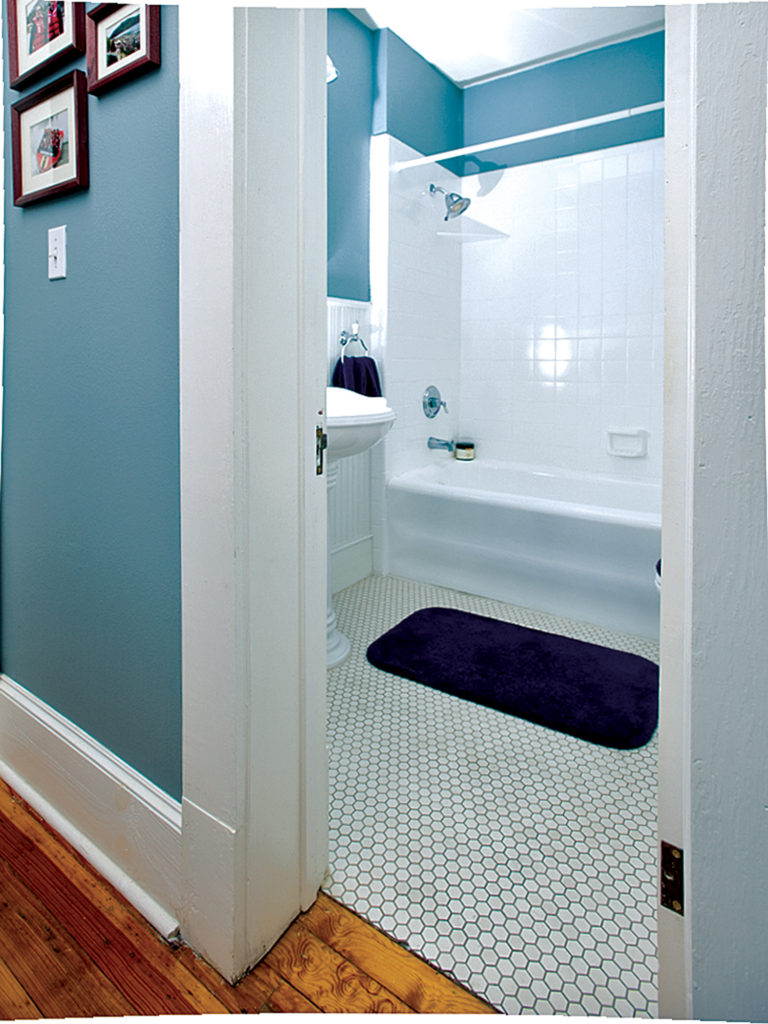 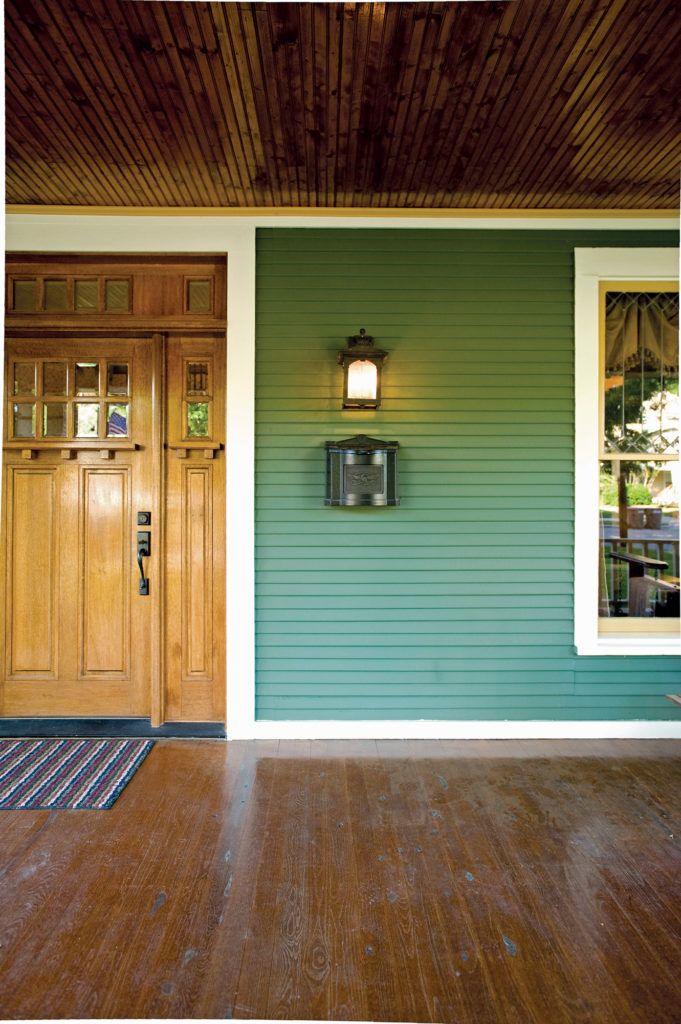 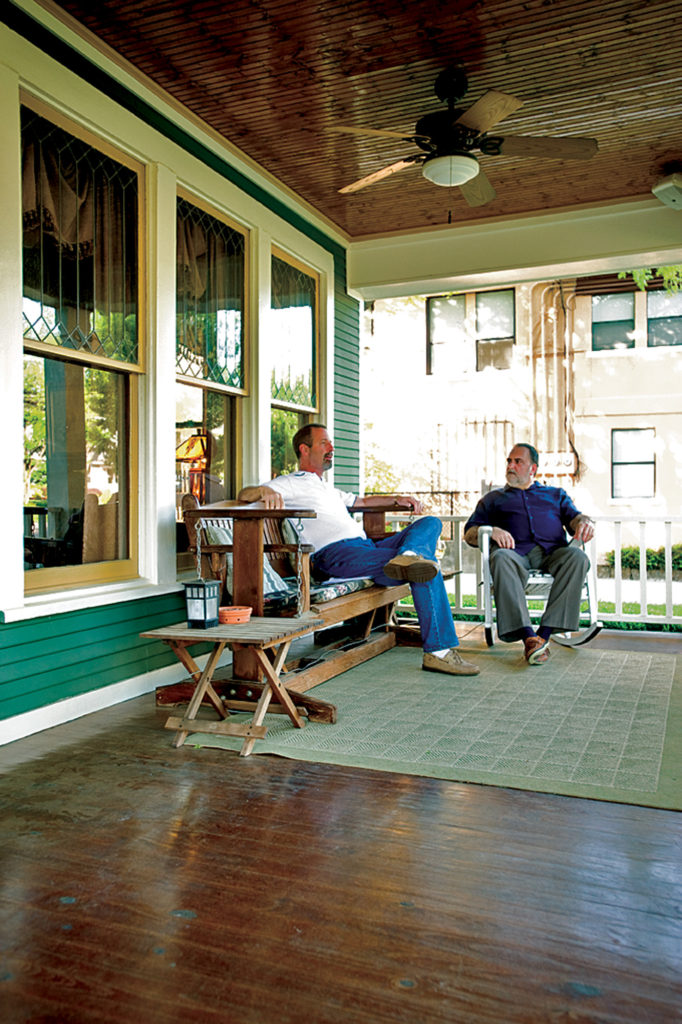 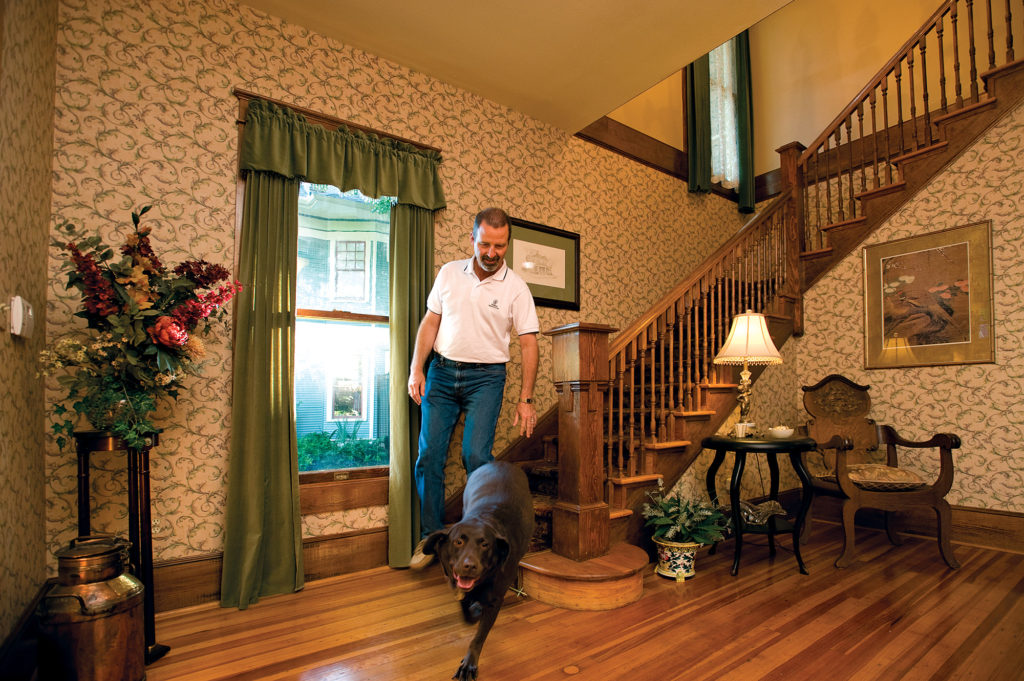 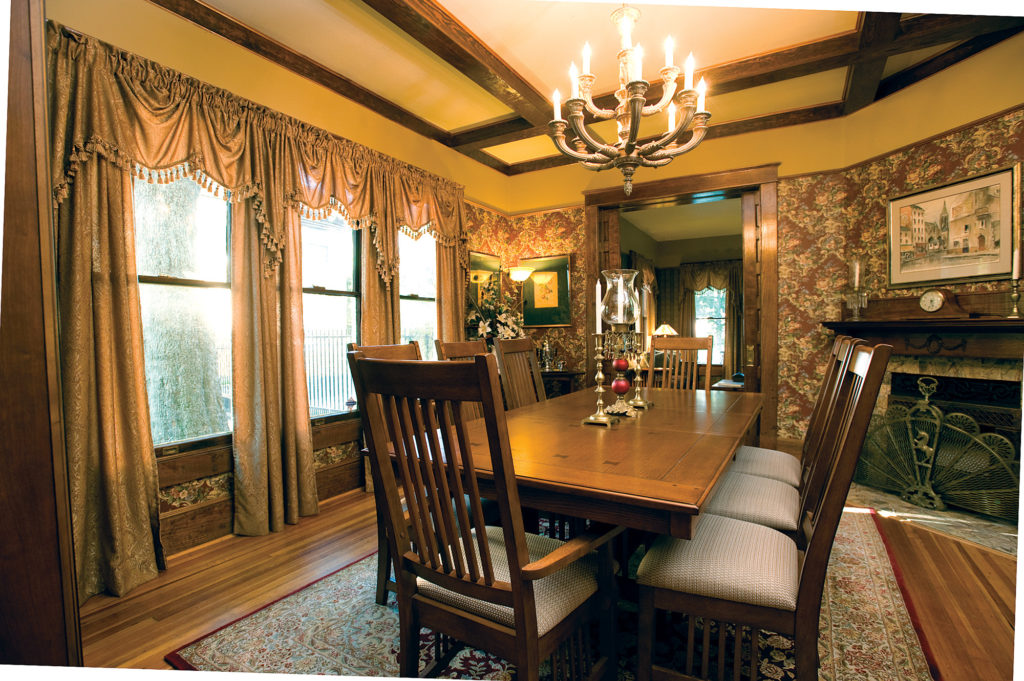 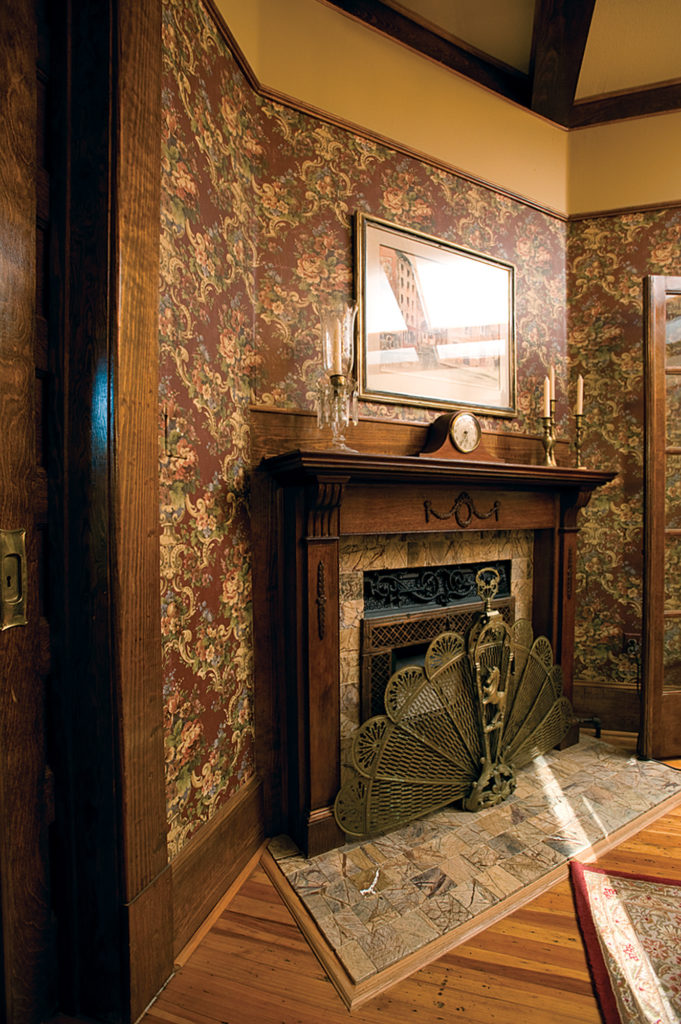 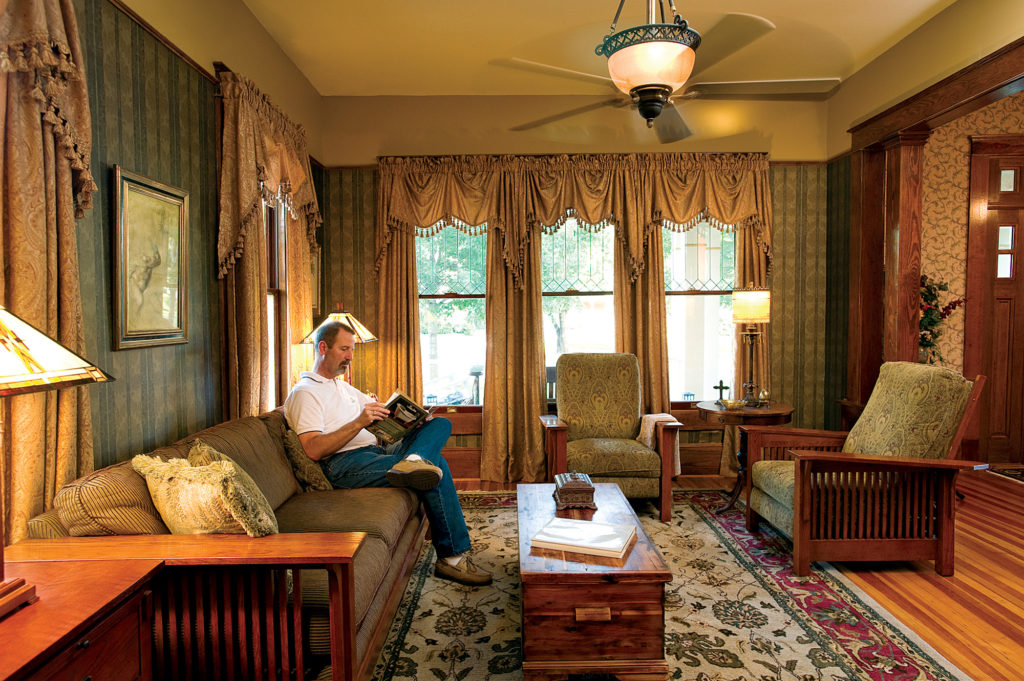 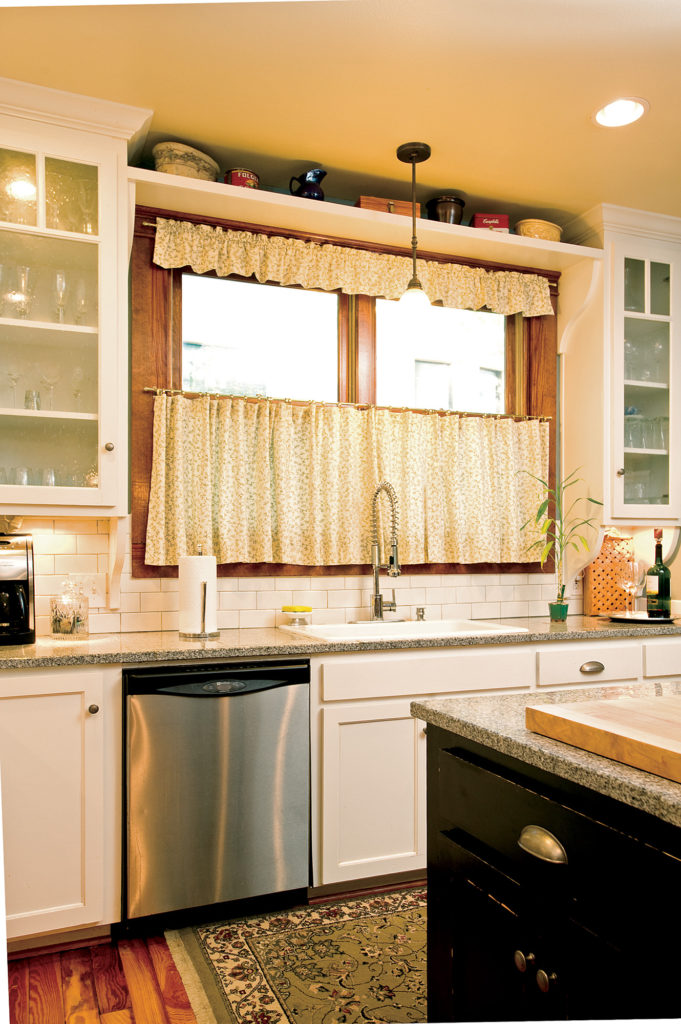 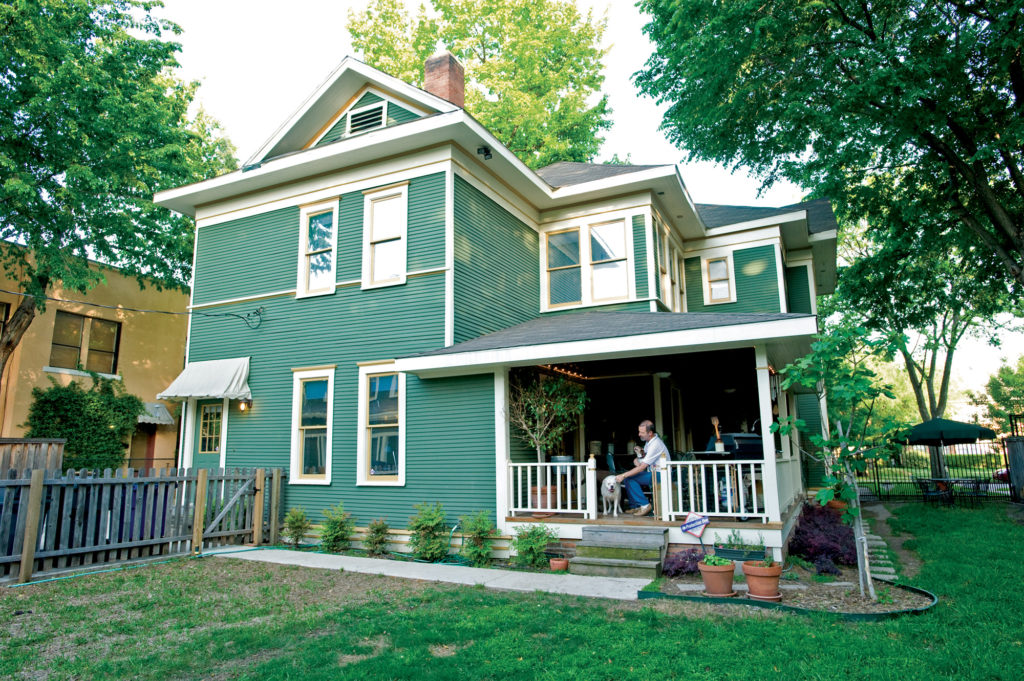 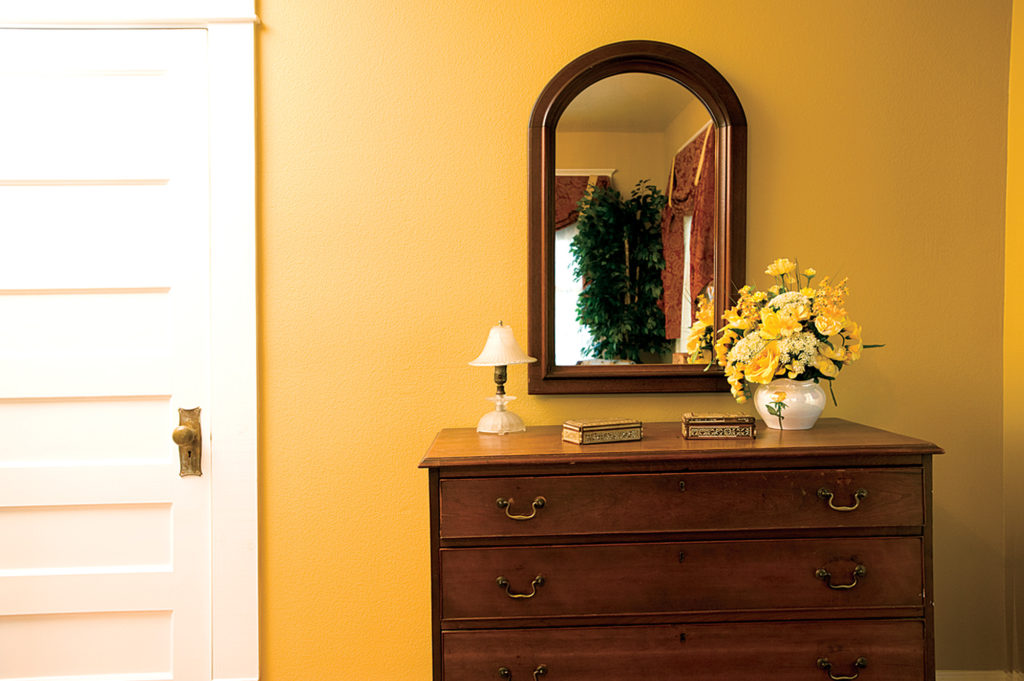 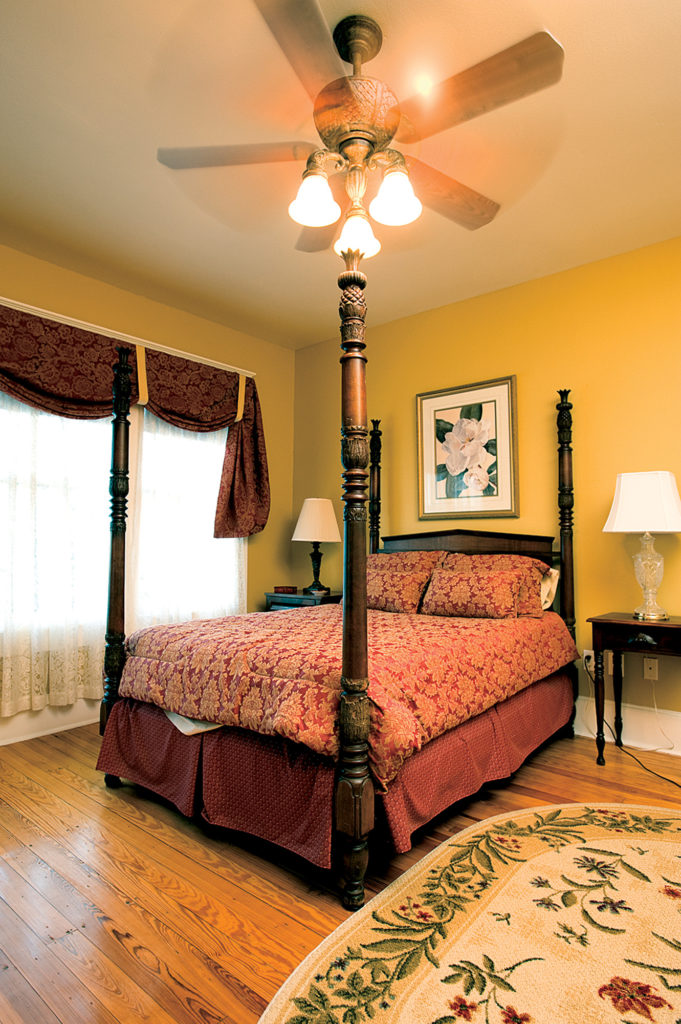 Plenty of restoration work remained to be done. An investor who purchased the house in the late 1990s had started, but had apparently run out of steam. He had taken the walls down to the studs, yanked out the kitchens, and refinished the heart-pine floors upstairs before giving up, leaving the house unlivable. Clark and J.W. moved into the property’s 400-square-foot garage apartment (formerly the servants’ quarters) and rolled up their sleeves.

They started by “buttoning up,” as J.W. puts it, in preparation for winter. They hauled original windows from the garage and reinstalled them in their openings, which had been inexplicably boarded up. They brought in professionals to modernize the wiring, update the plumbing, and blow insulation into the walls. Then they set about making sense of the interior.

One thing that didn’t add up: An angled wall in the dining room was adjacent to a similar one with a fireplace in the parlor, so they reasoned that the dining room must have had a fireplace, too. “One of the first things we did was go in and pry off that wood to see if it really was there,” says J.W. Indeed, the planks pulled away to reveal an original brick fireplace. They hired a brick specialist to repoint the mortar, then purchased an appropriate mantel from a local collector. (They’d lucked out with the adjacent parlor mantel, which was the only unpainted woodwork in the whole house.)

Stripping the rest of the wood trim of layer after layer of paint—including that shocking blue—would prove to be one of the restoration’s most difficult tasks. Using chemical strippers and a heat gun, J.W. spent weeks on just two living room columns before consulting with general contractor Wayne Guthrie about alternative methods. Wayne responded with an unconventional approach, using a planar, precisely adjusted, to remove all the paint but as little wood as possible from virtually every inch of trim in the house so that it could be re-stained in the original style.

The frugal spirit that led Clark and J.W. to build their new-old house once again guided them as they tended to the home’s remaining finishing details. J.W. throws the credit for bargain-hunting squarely in Clark’s court: “He’s one of those people who, if we see something we like and both think it’s too expensive, he’ll figure out a way to do it.”

Those novel cost-cutting approaches grace various rooms throughout the house. In the dining room, they re-hung draperies from the new-old house that Clark had sewn himself from material he found at fabric outlets. The light fixtures in the stairwell and dining room are treasures from the closeout aisle at a hardware store. They spent hours on the weekends sorting through spindles at a surplus store to re-construct the missing banister on the upstairs landing.

When it came to wallpaper, they shopped through DirectBuy, a service that enables consumers to save money by purchasing directly from manufacturers. They found a book of papers that were consistent in style with the house, then picked the patterns they would hang themselves. In the dining room, they chose one that “looks like it’s old and faded and cracked,” says Clark. For the front parlor, they made a near match to an old scrap of original paper they’d recovered. “It had the same color palette and a similar stripe to it,” says J.W. “It was kind of like, ‘I can’t copy it exactly, Otto, but I’m going to do the best I can here.’”

Clark refers to this sentiment as “channeling Otto”—both men take the original architect’s intentions seriously. “The man did some incredible work,” says J.W., noting his contributions to prominent Dallas landmarks like the Sanger Brothers Department Store and the Magnolia Building, with the iconic flying red horse on its roof. Clark and J.W. are honored to be ushering Lang’s own home into its next era, and they feel the weight of such responsibility. If Otto were to return tomorrow, says J.W., “I’d want him to walk in and go, ‘You know, I really like this. This feels like home.’”

Putting the Bungalow Back