For an introduction to the Aesthetic taste as it manifested in America, one need look no further than a house in, of all places, rural Hampshire County in central Massachusetts. The dwelling began as a modest Federal, built ca. 1810. Its greatness comes, however, from a remodeling done in the 1880s by the prosperous son of an early owner, who altered the entire house beyond recognition. Spindle-bedecked porches, eclectic windows, and a faceted tower, all in the Queen Anne Revival style, took the place of the earlier symmetrical façade. Still, the best features are found inside.

Most dramatic of all is the main hall, which was opened up to the rafters. The grand space soars to a decorative, stained-glass lay light, which caps a coved and vaulted ceiling finished in tongue-and-groove wood paneling. The newels and balustrades of black walnut are in the Eastlake style, an American version of the Aesthetic taste that was popular in Queen Anne houses. A Victorian neoclassical fireplace (with tiles creating an Italian scene) sits at the foot of the staircase, which ascends to a wide gallery. The house today is owned by Dan and Denise Smith, who keep the Aesthetic fires burning. 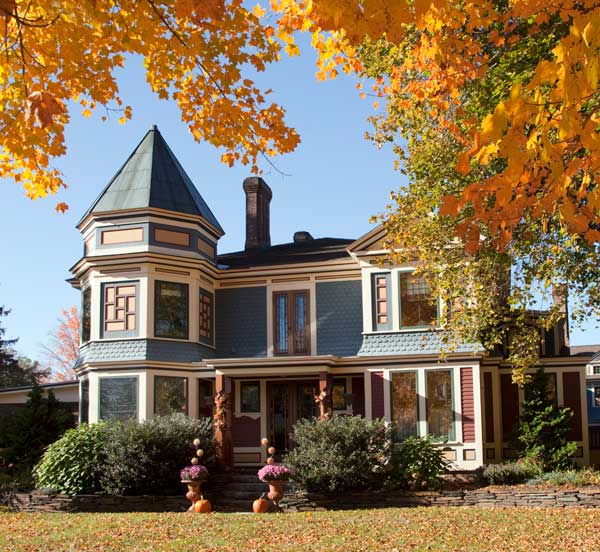 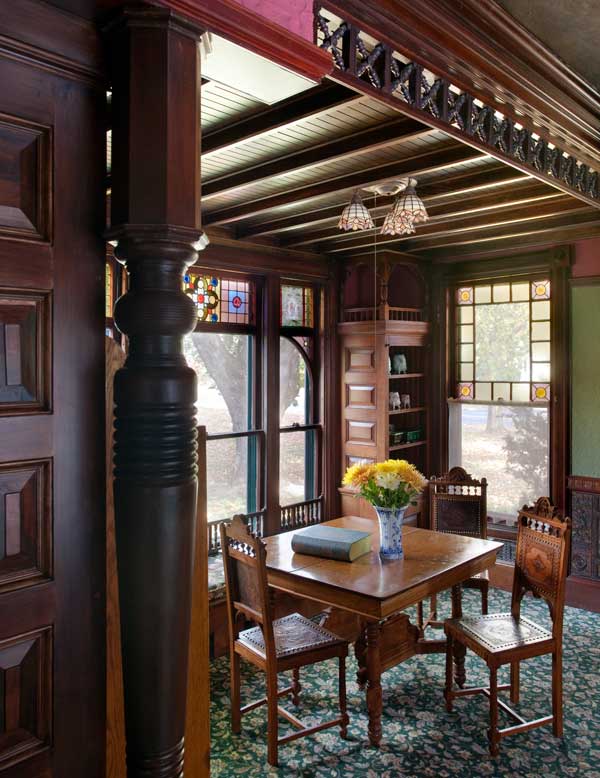 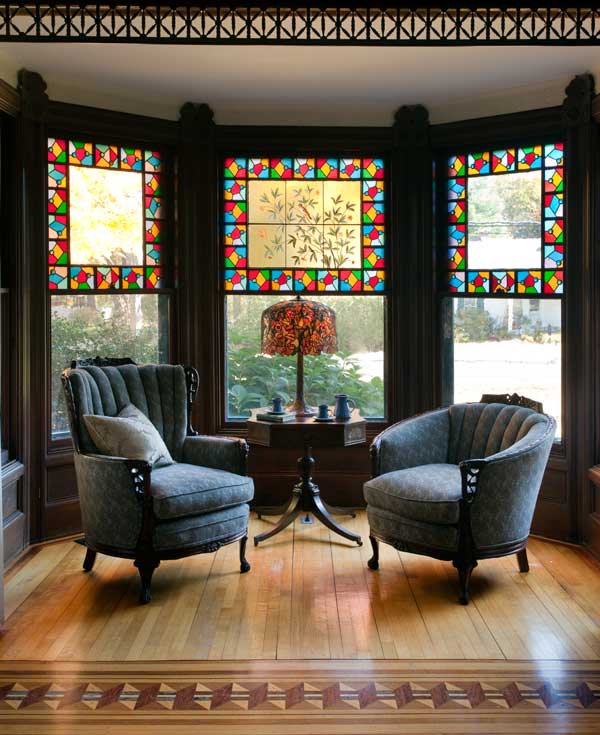 The Aesthetic Movement was a Victorian-era precursor of the English Arts & Crafts movement, arriving in the U.S. at about the same time as the residential Queen Anne style. Names associated with the American Aesthetic taste include Eastlake, Tiffany, and the Herter Brothers. The movement embraced interpretations of Japanese design and motifs, and Orientalism in general.

Embossed Surfaces: You may be familiar with Lincrusta–Walton, the embossed linoleum used as wainscoting in dining rooms, hallways, and stairwells—but few examples exist with their original polychromy, as here, where it is featured in several rooms. Borders, flowers, and spider-webs are picked out in color and metallic paints, in an approach more sophisticated that the usual glazed finish. The 1882 owners put Lincrusta designs in friezes, wall fills, and even the ceiling, resulting in a riot of pattern.

Spandrels: During the Grecian and Second Empire periods, graceful corbels and brackets made the transition from vertical columns to horizontal beams. By the 1880s, designers often specified the use of spandrels, composed of intricate turnings, which spanned the widths of colonnades or even entire rooms. The spandrel created an airy partition between two chambers or between a stairwell and a hall. This house has its 1880s spandrels, which boast a range of Aesthetic designs, including Asian-influenced geometrics and Rising Sun motifs.

Art Glass: Here the stained-glass windows are more reminiscent of British houses than American: nary a pane of opalescent glass to be found. Instead, window sashes are filled with decorative panels that were hand-painted with figural and floral motifs, many of them allegorical or derived from pre-Raphaelite paintings. A recurrent theme is the “cracked ice” pattern, a composition of random geometric forms that is a Japanese symbol of spring (i.e., thawing ice), with emerging plum blossoms represented here by glass jewels.

Hardware & Metalwork: Every surface bore the potential for embellishment, and numerous iron, brass, and bronze items were accented with Asian design elements. Along with hinges and doorknobs in this house, metal frames around fireplace tiles and cast-iron firebacks were cast with late-Victorian motifs. On a fireplace in the rear stair hall, the brass surround depicts “The House that Jack Built”; others have an abstracted, Eastlake-style foliate pattern.

Ceramic Tile: Plain and decorative tiles were the preferred, non-combustible facing for fireplaces in the late 19th century, in a departure from earlier slate and marble. This residence has a virtual catalog of tile designs: encaustic, majolica, hand-painted, and an exceptional blue-and- white Japonesque series depicting women in kimonos playing musical instruments. In another chamber, tiles depict an exotic Italian scene rendered in a faux three-dimensional perspective.

Hardwood Flooring: By the 1880s, hardwood floors had become very fashionable. The wall-to-wall Brussels and Wilton carpets of earlier eras were often laid as area rugs instead, and new patterns often mimicked oriental carpets. In this house, the floors have fancy geometric borders made up of ebonized wood and such hardwoods as walnut, maple, and mahogany.