The Van Deusen House in Hurley, New York, was built in 1723 as a story-and-a-half stone cottage with a kitchen ell. This simple form (not the bell-shaped gambrel we usually dub “Dutch Colonial”) is rooted in medieval Dutch architecture.

The old Hudson Valley house underwent a major renovation in 1909 when three dormers were added, the central staircase was re-conﬁgured, and ﬁreplaces that had been bricked over during the 19th century were uncovered. Otherwise, the house has remained more or less as built.

The owners, who are both antiques dealers, were conversant in different types and eras of antiques, but living in the Van Deusen House has heightened their appreciation for furniture, ironwork, fabrics, and crockery made in this area. Piece by piece, they have ﬁlled the house with things that ﬁt the mellow old rooms: hooked rugs and quilts made in Hurley, furniture produced for country homes by long-ago area cabinetmakers, local hand-hammered metal. Metalwork has been of particular interest; the house’s ﬁrst owner and namesake was a blacksmith, and much historic ironwork was original to the house. 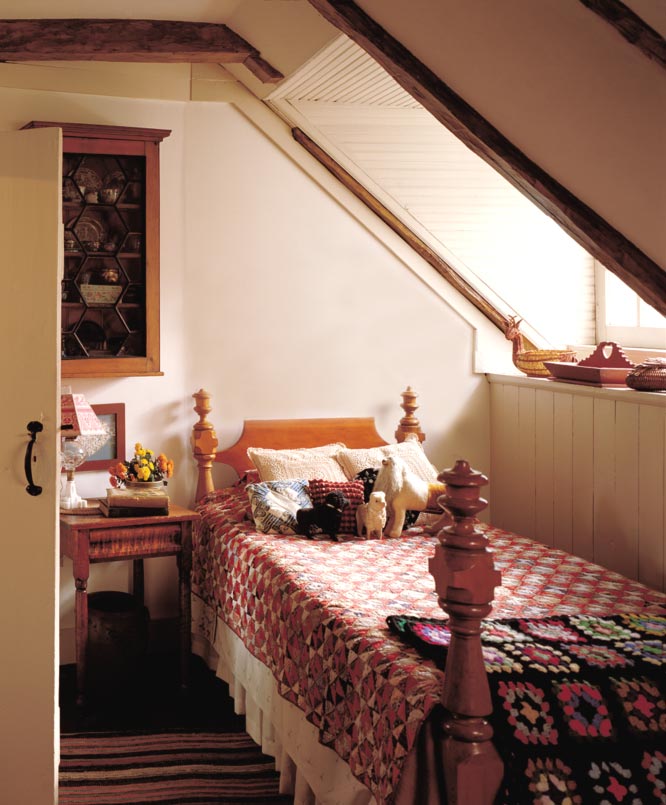 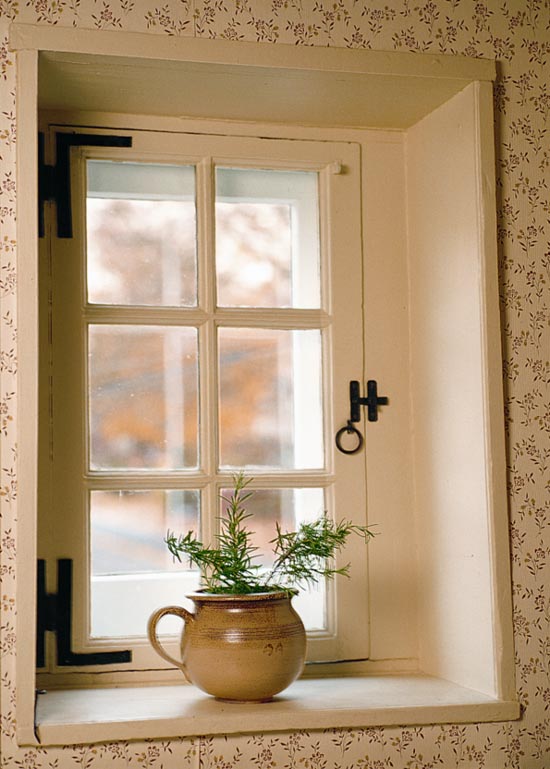 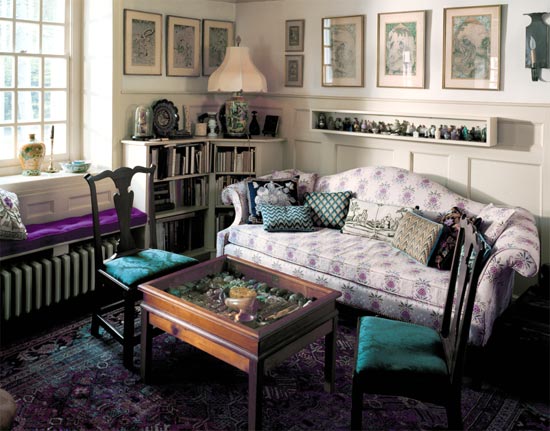 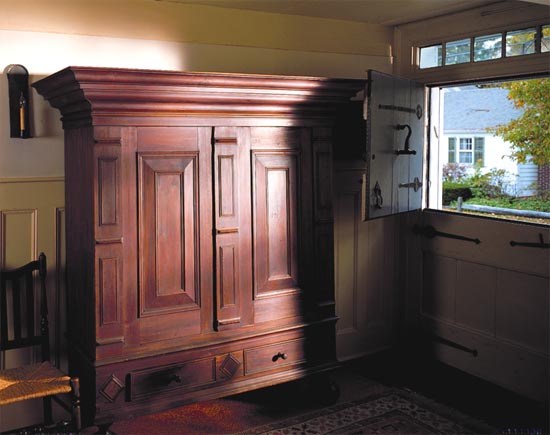 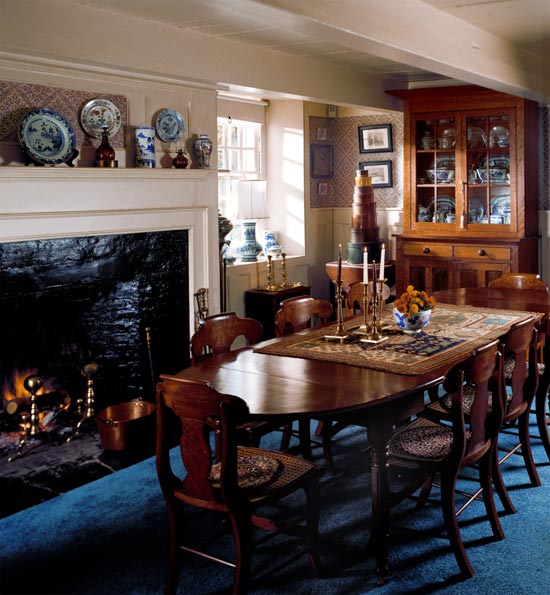 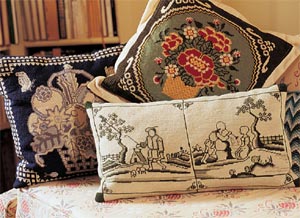 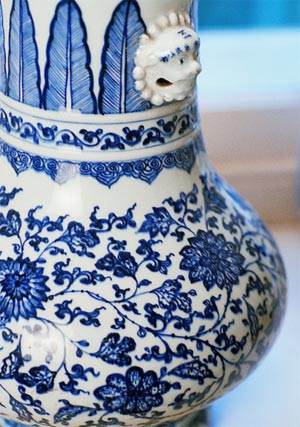 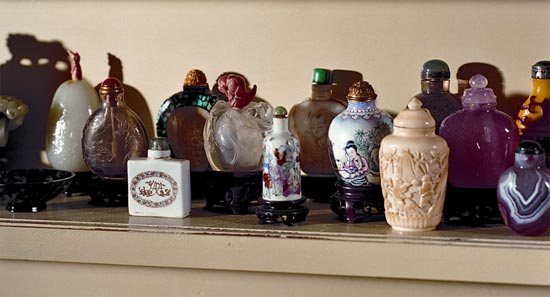 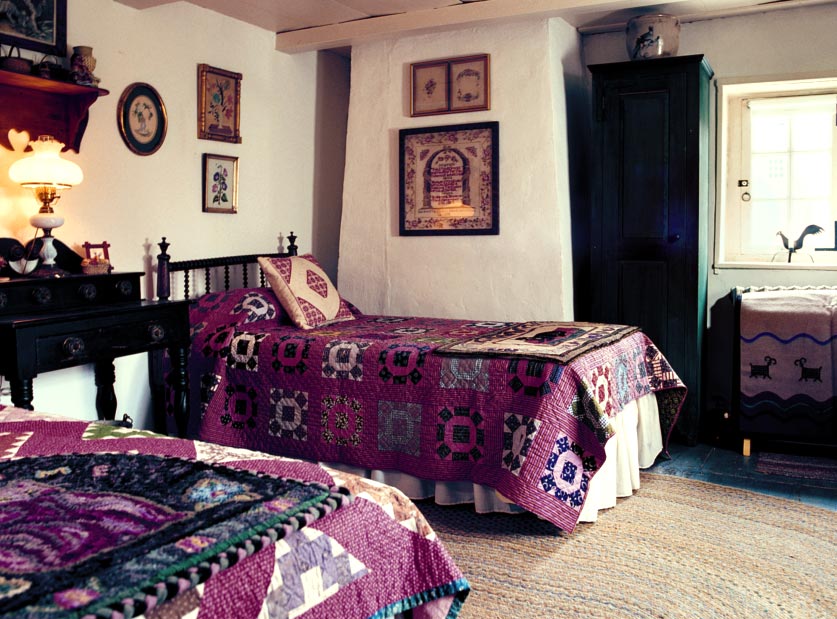 The furnishings in the Van Deusen House are not all from the 18th century (though many are), nor is there a strict geographical criteria for the collection. Well-loved objects came from this very house, or from this town, or China, and from places in between. But the furnishing scheme relates to this house and to the agricultural history of Hurley. The home is furnished with antiques that show us things about the lives of Hudson River Valley farmers across three centuries.

It isn’t surprising that the owners assembled a collection so sensitive to local history. From the moment they moved here, they began to work to heighten appreciation of Hurley’s antiquities; the wife was instrumental, in fact, in starting the Hurley Heritage Society.

This is still a place of cornfields, old stone houses, and rural serenity. Local pride in the Dutch architecture is high; Hurley itself is a National Historic Landmark. The Van Deusen house has played a prominent role.

The most compelling feature of the village is the superb collection of stone houses lining either side of Main Street. They were built starting in 1669, after the first log huts put up by 12 Dutch and Huguenot families in 1661 were burned by the Exopus Indians of the Algonquin Nation. By then the territory was English, and Nieuw Dorp (New Village) was renamed Hurley, after Governor Francis Lovelace’s ancestral home in England.

During the American Revolution, the English burned Kingston, New York’s colonial capital. Hurley became a refuge for Kingston residents, and for one month in 1777, the state’s capital. The Senate chamber was the Van Deusen House dining room (reportedly because its living room was too cold). The house was also a hiding place for state papers, and a prison for the noted Tory Cadwallader Colden.

Around 1797, Isabelle Hardenberg was born a slave in another of Hurley’s stone houses. She became famous as the abolitionist and evangelist Sojourner Truth; rumors persist claiming the town was on the Underground Railroad.