In 1901, Edward Hudson, an English publishing magnate and the owner of Country Life magazine, commissioned Edwin Lutyens, regarded at the time as the leading architect of country houses in England, to refurbish 16th-century Lindisfarne Castle. The fortlike structure on the highest point of Holy Island in the North Sea was to become a family home. Combining the English Arts & Crafts theories of the time with his budding interest in classicism, Lutyens created something of an anti-castle, balancing the imposing structure with an intimacy of scale.

Such was the challenge more than a century later for McKee “Mac” Patterson, AIA, of Austin Patterson Disston Architects in Southport, Connecticut: how to design a manor-like residence so that the components of the home “would all hang together as a cohesive whole,” and, he quips, “not look like a big wedding cake.” Taking his cues from the homeowners (Anglophiles like himself) and inspired by Lutyens, Patterson and his team achieved a design that, similar to Lindesfarne Castle and other notable Lutyens projects, was simultaneously unpretentious and grand. “It’s a beautiful, flowing house,” says Patterson, that “weaves a continuity” among the rooms and settles comfortably into its secluded setting.

Perched on a plateau 20′ above meadowland on a large lot with mature trees, the house and yard evoke a Brontë-esque grandeur softened by playful elements more reminiscent of Beatrix Potter. It is not a stretch to compare it to the Surrey cottages favored in the illustrations of another children’s book author, Ralph Caldecott, who encouraged young “Ned” Lutyens, his neighbor, to pursue a career in architecture. In early English Arts & Crafts fashion, stone, stucco, and brick bring a variety of textures to the exterior, along with well-proportioned solid forms, a wide terrace, a peaked roof over the master suite, and other features evocative of the movement, like upper wood shingles and timbering detail. 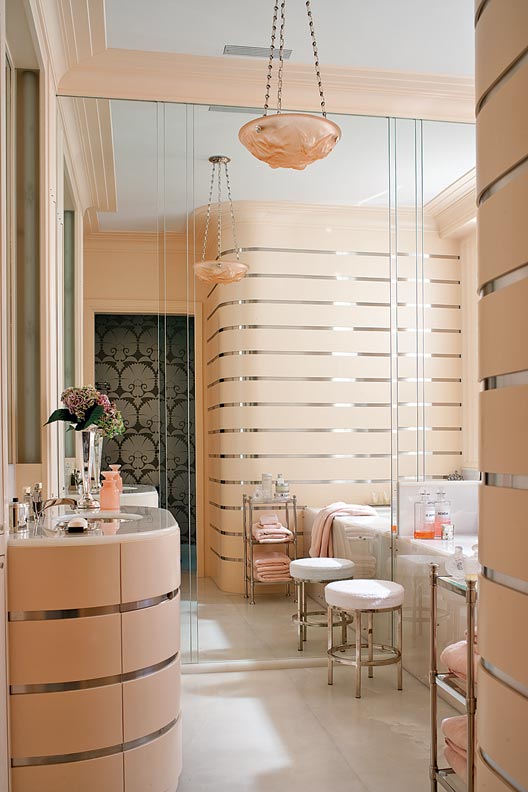 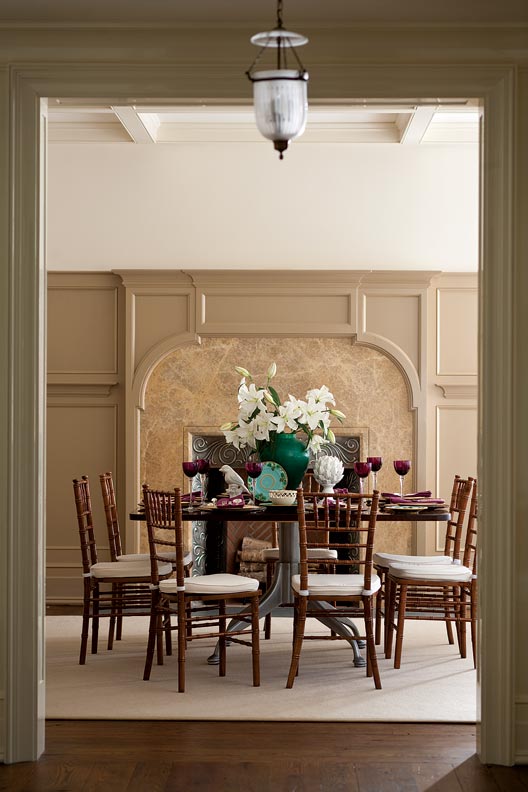 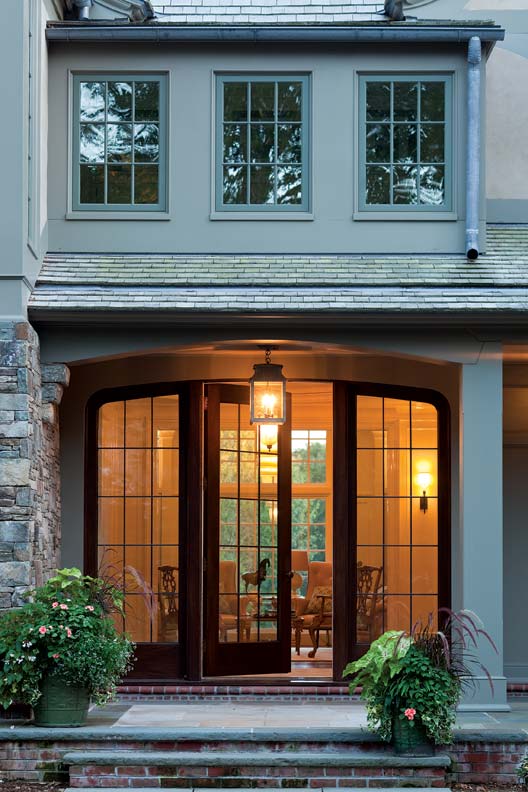 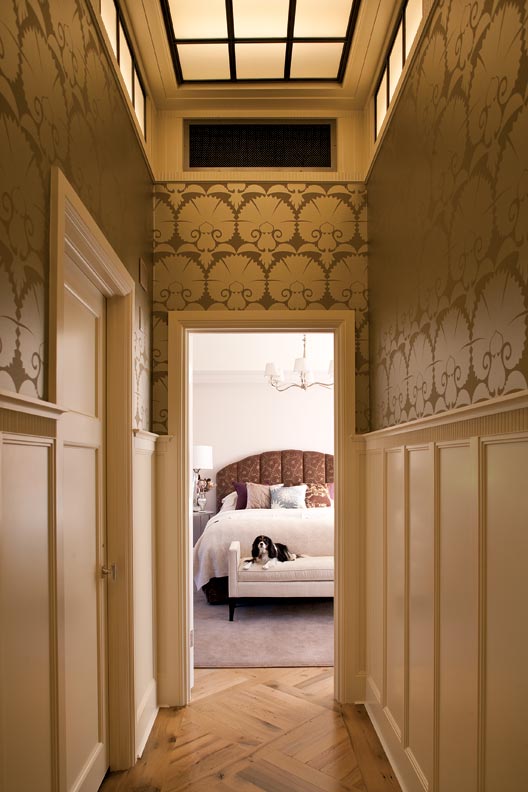 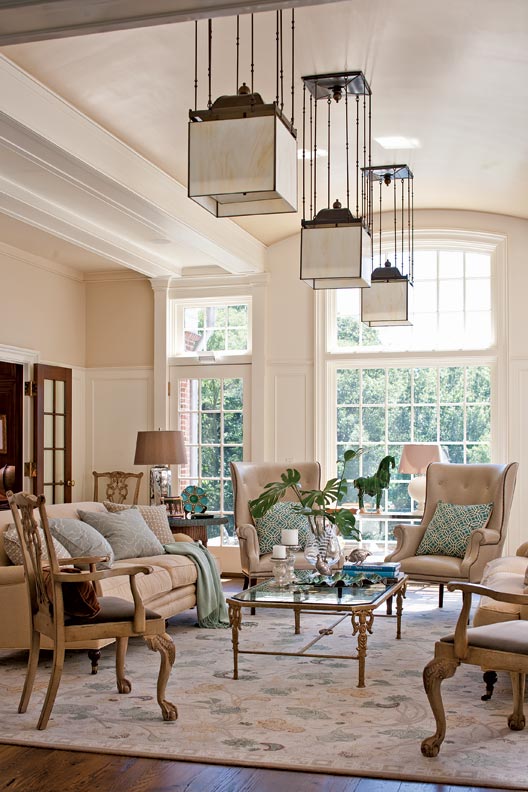 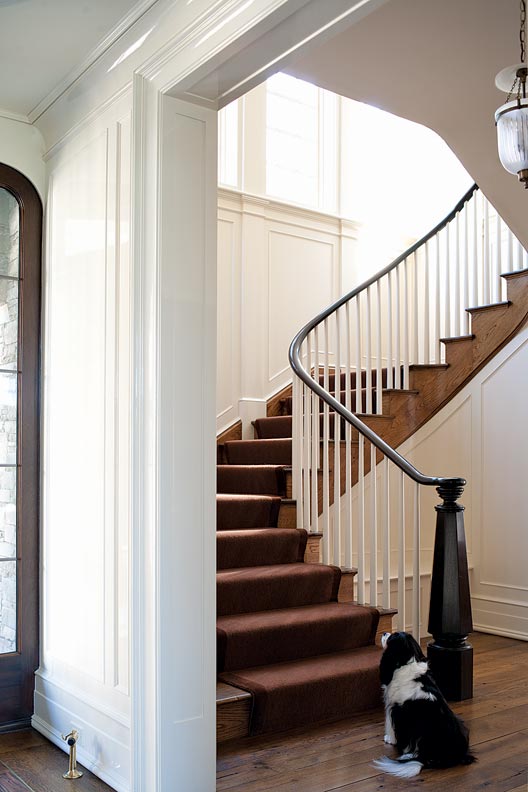 Noting the house’s exterior, jurors who selected it as this year’s winner of Connecticut’s AIA chapter’s Alice Washburn Award, which acknowledges excellence in traditional house design, cite its “picturesque play of forms and materials,” and “the overall asymmetrical massing of elements [that] is balanced and comfortable.” Transition areas between the house and the field below it include a terrace running the length of the house, an infinity pool, and a garden. Giant windows at one end of the living room draw the eye through the front door and entry vestibule to the view outdoors.

Details abound inside as well that illustrate how the architect balanced a large house with human scale. The downstairs level of interconnected rooms is oriented from the living room. The homeowners, frequent hosts, wanted a large-scale space in which to entertain, yet they wanted it to feel cozy. So from this central party room radiates a clutch of smaller gathering areas: an inglenook—a room within a room—with a fireplace, a paneled library, and a dining room featuring British-style finish work that includes high wainscoting, a large firebox with a pink-hued limestone surround, and a plate rail. Throughout the home, ceilings vary in height, with none under 9′. High ceilings dwarf a 7′ door leading from the living room to the library, a deliberate visual contrast that gives intimacy to the space. Dropped beams lend texture to the living room, and also to the dining room where the ceiling is coffered.

A butler’s pantry leads from the central party room to the kitchen, the pièce de résistance in the house, where ceiling design is once again brought to the fore. Like Lutyens, who was known for his sense of fun and using space in interesting ways, Patterson approached the interior structural design with, in part, the desire to create an “element of surprise.” He achieves this in the dynamic kitchen with a steel-and-frosted-glass structure in the ceiling illuminated by dormers. “The idea was to make a bright and airy English-style conservatory space,” notes Patterson, who collaborated with the wife, an interior designer, on the project. “She knows what she’s doing and how to do it,” says the architect, noting that her design decisions were influenced by her love of cooking and gardening as well as her fondness for the lifestyle in England, where she has traveled extensively with her husband.

For example, her preference for a piece of freestanding furniture in the kitchen, a classic approach in a European kitchen, was fulfilled by a custom table in walnut and burled-walnut veneers. The massive table acts as a center island. Natural light streams in during the day, while at night, the ironwork canopy illuminates the main section of the kitchen. Neutral cabinets around the perimeter of the room act as a foil to the commanding walnut table and equally imposing La Cornue stove imported from France with a custom-made hood.

Dramatically toplit like the kitchen, the main upstairs hallway, or vestibule, has illuminated false-clerestory windows, a distinctive column and beam treatment, high wainscoting, and a 5′ chair rail on which to rest artwork or family photographs. Eschewing a string of rooms one after the other, the architect organizes the master suite spaces centrally, with doorways in the upstairs vestibule leading to closets, dressing rooms, “his” lavatory, and “hers”—a French Art Deco jewel box of a bathroom in white onyx and brushed metal.

Subdividing big spaces, physically and visually; offering continuity with flooring and unification through trim systems—these preoccupations are central to Mac Patterson’s and his firm’s approach. “A lot of detailing, molding, the little things,” are key to bringing intimacy to a large-scaled house, says Patterson. “The trick is how you use those things and the restraint with which you use them.”

Janice Randall Rohlf is a freelance writer who lives on Cape Cod, and is the former editor of Cape Cod View magazine for the Cape Cod Times.

An Old Schoolhouse Converted Into a Home