The true test of the timelessness of a house is not only whether it fits the needs of its occupants, but also whether it has synchronicity with the style of the neighborhood where it’s sited.

Harrison Design (which has offices in seven U.S. cities and a studio in Shanghai)used this principle in creating an English manor designed for a contemporary lifestyle, but which also fits into the Tuxedo Park neighborhood of Atlanta, Georgia.

Tuxedo Park is a National Register of Historic Places-listed neighborhood in the chic Buckhead area; it boasts the governor’s official residence and features a number of large estates from the 1910s through the 1930s, as well as smaller infill homes built through the 1970s.

The husband bought the original house, a 1950s brick ranch, when he was single.

“He lived in it for some years, and he created an incredible backyard, with a swimming pool,” says Greg Palmer, principal architect of the Naples, Florida, office of Harrison Design. But “with a wife and three young and very active boys, he wanted to renovate the house.”

The couple gave Harrison Design two main mandates: keep the swimming pool, which was relatively new, and preserve the 50-year-old, magnificent magnolia tree that is the defining feature of the front yard.

After considerable study, the Harrison Design team, which included project manager Derek Hopkins, decided that the best solution was to build a new house on the one-and-a-half-acre property. 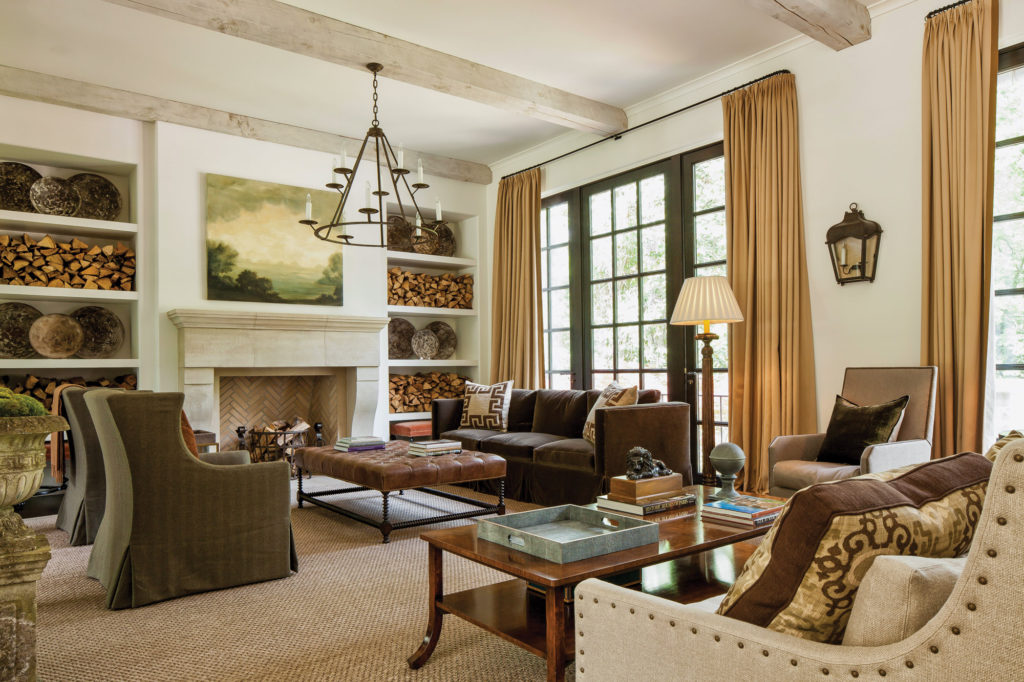 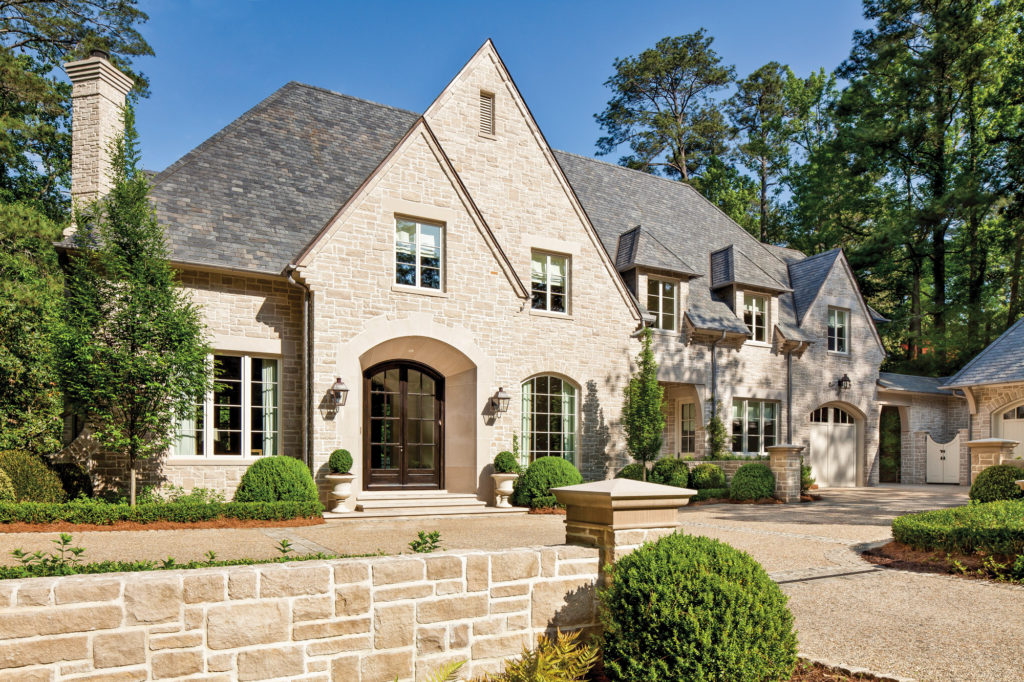 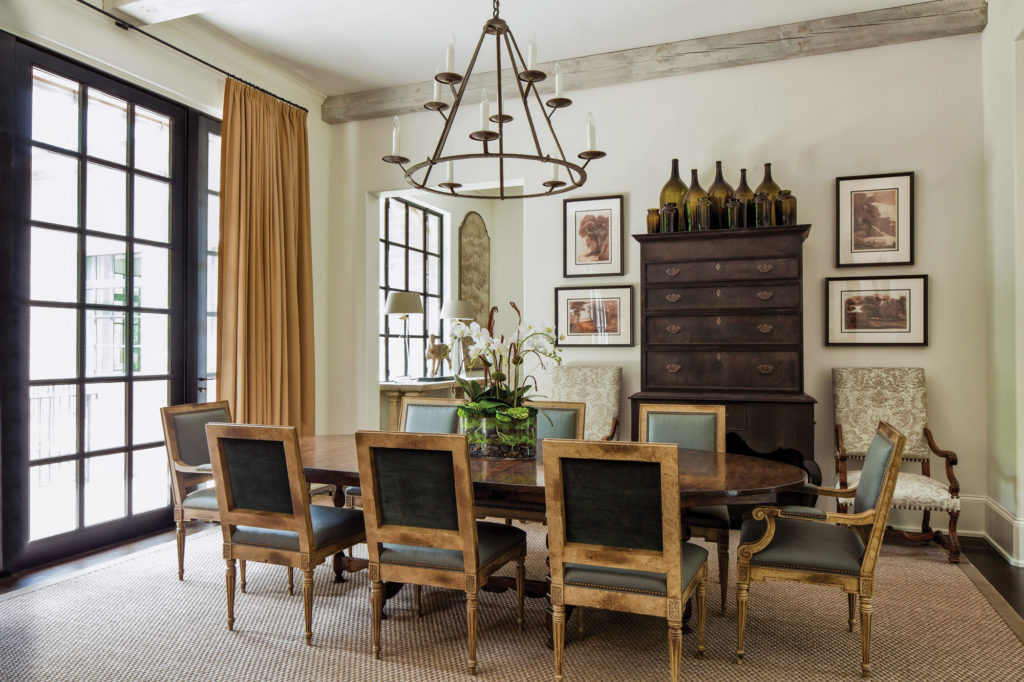 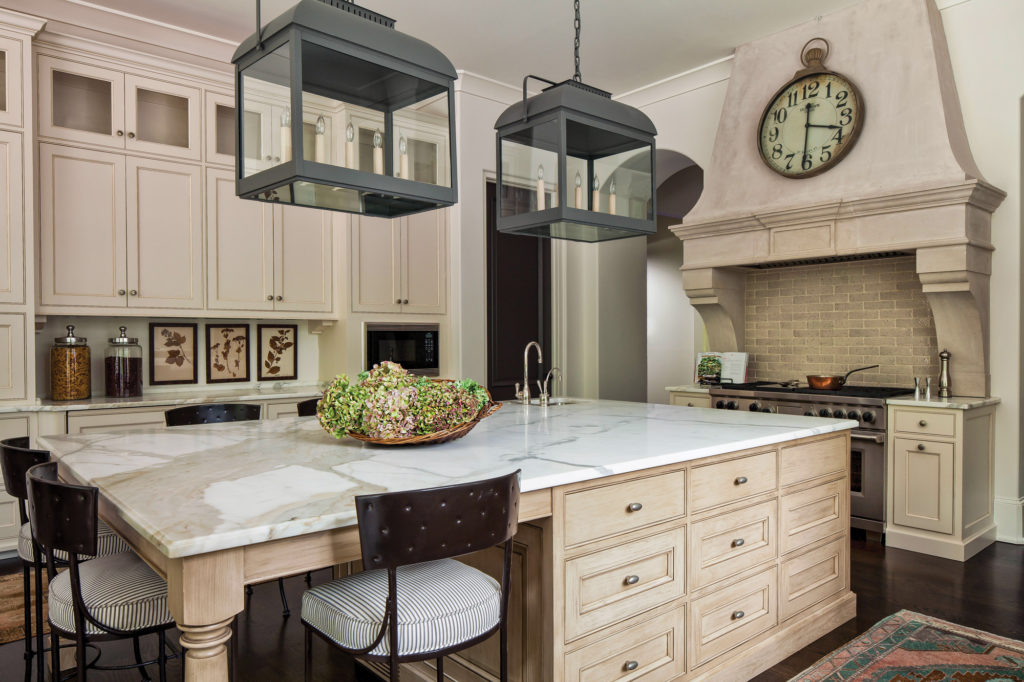 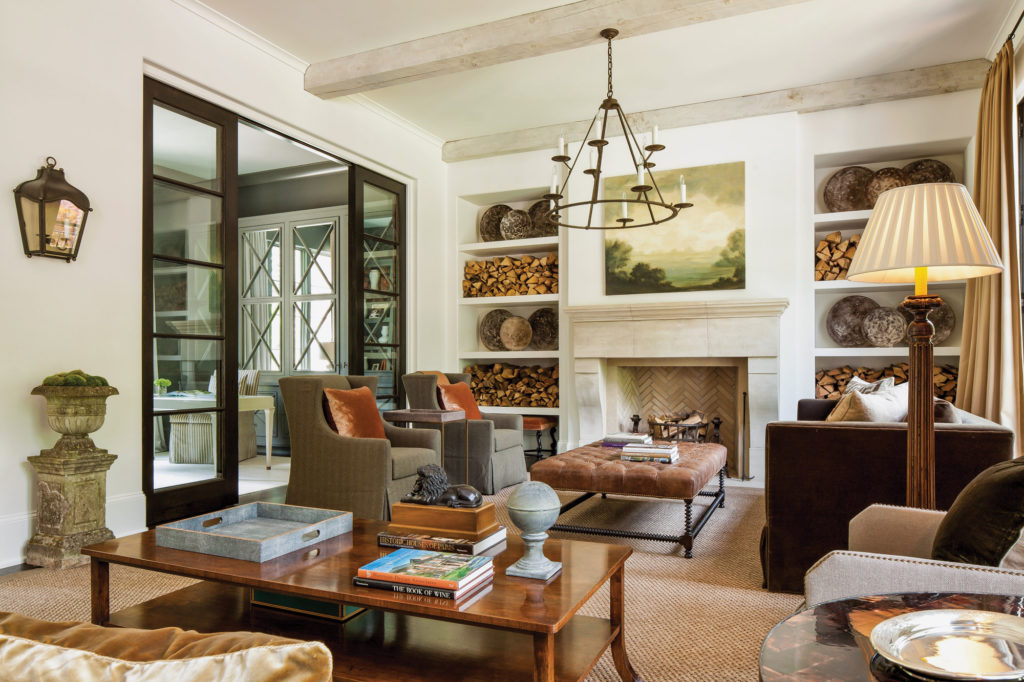 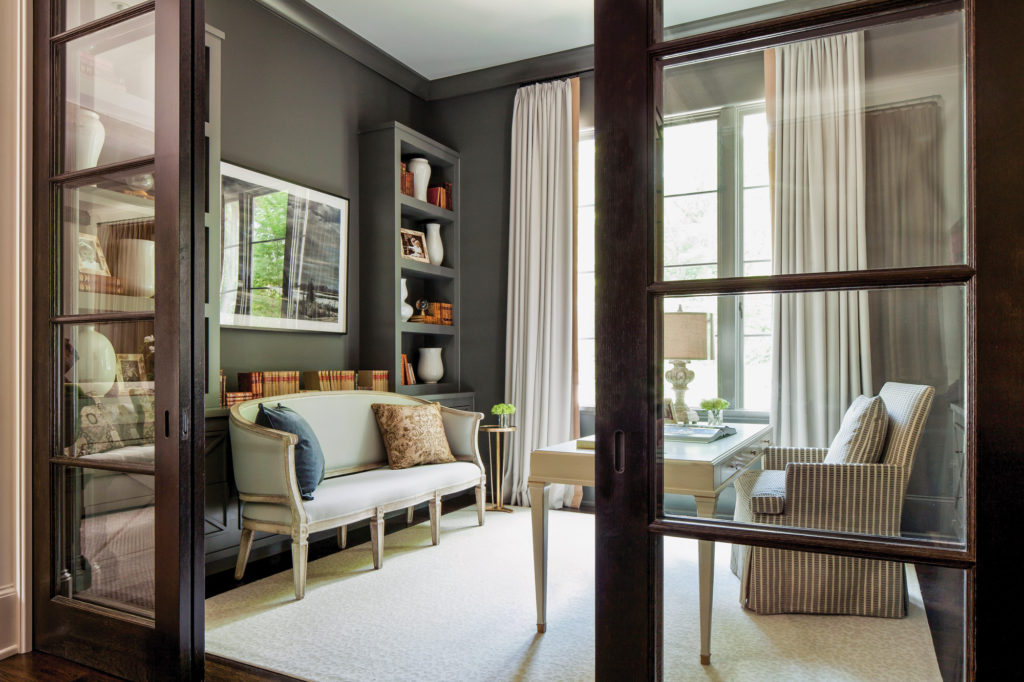 The English manor, which has a gray-black slate roof and dormers, is clad in cleft-face, tumbled Indiana limestone, which was acid-washed to give it the appearance of age.

“The house is in the spirit of the 19th-century English architect Sir Edwin Lutyens, who was known for his country houses and public buildings,” Palmer says. “There was ample historical precedent in Tuxedo Park for English style, yet it’s a modern house.”

The couple wanted a large home—its 8,000 square feet occupy two stories plus a basement, offering a living room, a dining room, a family room, five bedrooms, a mudroom, a project room for the boys, a study for the wife, and the kitchen/breakfast room.

“The perspective you get from the front of the house disguises its actual size, so it corresponds with the other homes in the neighborhood,” Palmer says. “We broke down the massing by attaching only a single-car garage, and adding a two-car detached garage that’s perpendicular to the house and largely hidden by the old magnolia tree.”

He adds that the design is asymmetrical: the front door was positioned off-center to accommodate the tree. The front façade also has a side porch, which Palmer calls a “friend’s entry” and which opens to the stairs. Another space, an archway, leads to a linear garden that’s the passageway to the pool.

“It was challenging, because the front of the house is visible from the street, as are its neighbors,” Palmer says. “And the lot has a slope from the street to the rear and also from right to left.”

The backyard living spaces were of prime importance to the owners.

“They wanted an active pool that could be seen from the kitchen and family room so they could monitor their boys,” Palmer says. “They also wanted to retain a large, flat yard in the back for playing, and they wanted the children to take advantage of the creek that flows along the back border.”

The 20 by 50-foot swimming pool is new, designed by John Howard. It is anchored by a circular spa/hot tub and a shallow-end sun deck that’s ideal for the boys.

Inside, the front entry hall features a vaulted ceiling. The home’s public and private sides are divided by a transitional wet bar/butler’s pantry.

The manor gets its contemporary cachet from wide doors, high ceilings—public rooms soar to 12 feet—floor-to-ceiling windows, folding doors, and French doors that open the rooms to the outside and add natural light.

“Craftsmanship and attention to detail allow this simple house to be successful,” Palmer says. “We kept the proportions at a human scale, but the rooms still feel spacious. The (contemporary) interior and (historical) exterior are each of their own time, but we bridged the gap by doing things like streamlining the trim.”

The furnishings are likewise traditional in style and gracious in proportion.

Family life centers around the kitchen and breakfast room and the family room, which opens to a covered porch. The wife’s study, off the living room, has sliding glass doors that allow her to retreat but keep an eye on her sons. “The house has settled into its site,” Palmer says, “and it’s a good neighbor.”