“Initially, we were looking for property to build on,” Murray says. “But in the course of looking, we found this particular property, which had a mid-nineteenth-century farmhouse on it. So we quickly changed course and decided to do a restoration rather than a new construction.” 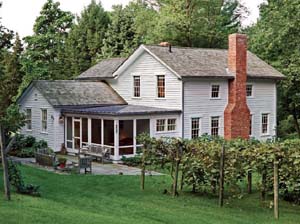 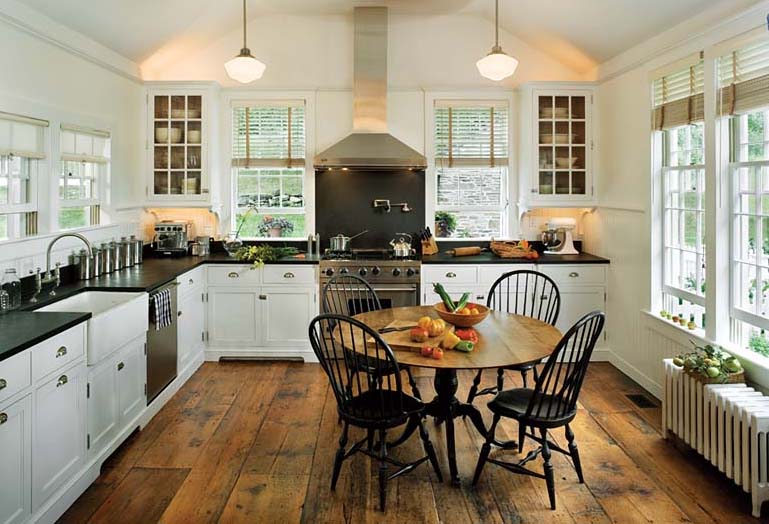 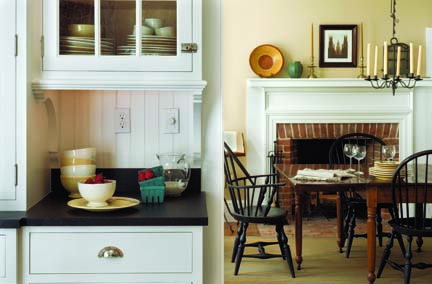 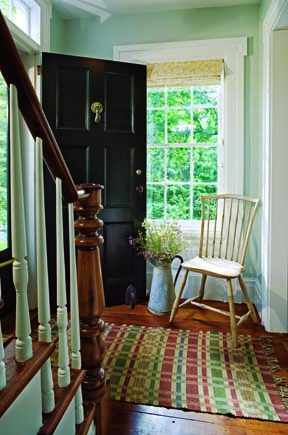 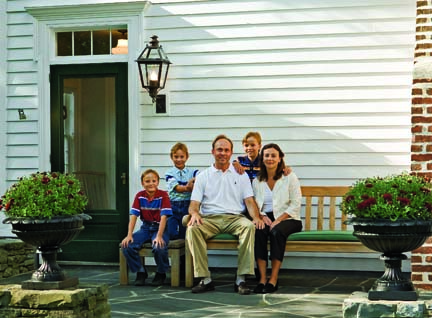 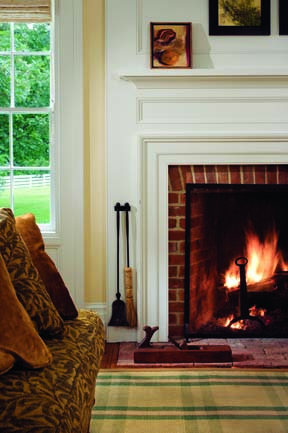 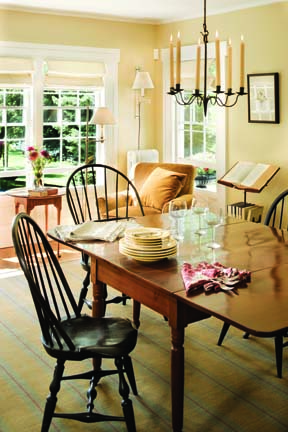 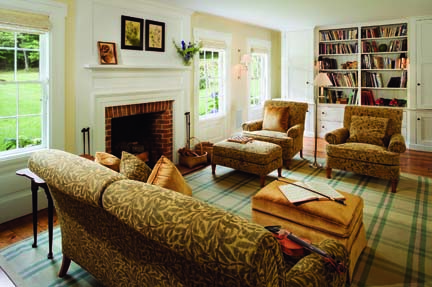 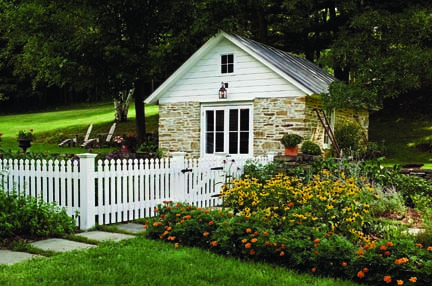 Murray has a reputation for refined and gracious designs and renovations of fashionable residences—from grand country estates to New York City apartments and town houses. But for his Chatham, New York, country house, Murray would concentrate his talents on a smaller and more personal scale. What makes this 2,000-square-foot farmhouse most noteworthy is how this owner/architect was able to simultaneously restore its historical integrity while gently imposing a sense of design on the structure and incorporating the contemporary features his young family needed.

Flipping through pre-restoration snapshots in Murray’s office, it’s hard to spot the home’s few original details. Indeed, it seems unlikely that very many significant features could have survived the injuries and depredations of time. And what remains must surely lie hidden beneath decades of imprudent alterations and expedient fixes.

“In the 1960s and ’70s there had been modifications that, well, you can probably imagine,” Murray says with a shake of his head. Some of the more egregious offenses included drop ceilings and fake wood paneling. “And there were hollow-core doors everywhere,” he says. “But the casings were original, and the mortises for the iron hinges were still present.” Murray points to the windows, noting that several retained their antique glass, and others still had their wood trim and paneled bases intact. “So here were just the kernels of this really sweet design, and it was exciting for us to try and bring it back.”

Antique doors—located by the contractor—were hand-cut and fitted into the openings with iron hinges secured from an architectural salvage yard. Wood single-pane storm windows and bronze screen sashes took the place of aluminum triple sashes. (Murray changes out screens for storm windows each fall.) The asphalt roof was replaced by cedar shakes. New gutters and leaders of lead-coated copper were installed, the same material chosen for the roof of a porch addition. Paint was removed from the 7″ white pine floor in the entry hall as well as from the stairs’ newel-post and banister. Where the floors had been damaged, dutchmans were cut—a time-honored repair method.

Appropriate new elements were introduced during the restoration, too, but these were informed by existing features. One notable exception was the addition of cast-iron radiators. Previously, the home had a forced-air heating system, and the second floor was unheated. Murray installed 10 refurbished radiators from a Hudson, New York, salvage yard, placing them mainly opposite each other at the outside corners of the rooms rather than directly under windows. The result improved heating throughout the house while enhancing the character of each room.

Establishing a Sense of Design

Although the house is ostensibly a Greek Revival, it owes much of its design to the region’s farmhouse vernacular and to sheer necessity. Unlike a traditional Greek Revival, for example, the front door is not on the gable end. The gable faces a steep western slope, so the door simply could not be located there.

“There was a certain quirkiness with no particular way to resolve it but to go with it,” Murray says of the entry. He installed an antique door with an overdoor and transom, added a carriage light, and transferred a window from the kitchen to a spot above the entry, balancing out another window on the second story.

“What we were trying to do was establish a nicer compositional feeling at that entrance,” Murray says. “The placement of the window above and the addition of the transom give it a bit more weight.”

The new kitchen and porch addition on the house’s eastern side fulfilled a number of design goals. It offers much-needed living space and adds compositionally to a sense of organic growth occurring through the years. Additionally, the new wing activates this end of the house and connects it more closely to a small stone outbuilding on the property.

Inside, Murray opened up the northern views by installing windows on either side of a new fireplace in the living room. The fireplace was built of old brick, and the fireplace tools, spark arrester, and andirons were all fashioned by the head blacksmith at Hancock Shaker Village in nearby Pittsfield, Massachusetts. In the family room, Murray returned the basement door to its original position, adjacent to the fireplace. The new fireplace surround incorporates this door, reintroducing an idiosyncratic element that had been lost decades earlier.

Among the challenges facing anyone renovating an old home are finding ways to utilize the existing space better and—if necessary—to enlarge the space appropriately. As home buyers, the Murrays were attracted to the structure’s compact, tidy, and uncomplicated design, and it was important to them to preserve it. But as an architect, Murray also recognized there was a need to update the building to accommodate a contemporary family—in this case, his own.

The house as they found it was a simple L shape. On the first floor, a family room was located to the east of the entry and a dining room, small kitchen, and bath were located to the north. A beam between the dining room and kitchen was replaced by a steel beam, and the newly opened space created one large living area. The new kitchen, with adjoining porch, bath, and mudroom, was then constructed at the rear of the house. The kitchen opens onto the dining room, which, as Murray explains, “for all intent, has become our family room.”

The new kitchen offered an opportunity for Murray to flex his creative muscle and even play a bit. “I was very attentive on this layout,” he says, “partly because it was fun.” For example, he literally raised the roof in the kitchen, specifying a 10’6″ tray ceiling. “Elsewhere the house has 8’2″ ceilings, and I felt it was important to have a contrast in terms of the volume of the room.”

Murray carefully considered how the furnishings and fixtures would fit into this volume, too. “Everything about the kitchen was studied in terms of balance and in respect to the massing,” he explains. The stove and hood form a center point at the rear of the room, with an upper cabinet and a window placed symmetrically at either side. Cabinets are balanced on either side of the doors to the dining room.

Other updates and improvements appealing to a modern homeowner’s sensibilities were undertaken upstairs. Closets were enlarged, and two small bathrooms were combined to make a large one with a standing shower and tub. The tiny fourth bedroom was converted into a study by removing the doorway to the hall and making the room accessible only from the master bedroom. Murray erected a small interior window in the study overlooking the stairs. “When I’m at the desk, I can see the hall and still be engaged in what’s going on,” he says.

These alterations were carefully enacted to preserve the building’s character and what Murray refers to as the “simplicity and manageability” of the house. “My wife [Antoinette] says the house was fortunate that we came across it. And there is just something right about regenerating a building like this and knowing there will be those who will enjoy it past us.”