When people say a house makes time stand still, it’s usually meant as a compliment, a way of saying that the home resembles nothing so much as a beautiful, carefully preserved history book. But there’s another kind of time stoppage that can happen in old houses, and it’s not pretty at all. That’s what Mike and Irena Guinness encountered the first time they walked into an 1825 Greek Revival-style farmhouse in Scottsville, New York.

Their first clue should have been the “lock” on the vacant structure’s front door: a 2×4 beam, wedged from the doorknob downward to a doorstop that had been nailed into the home’s original maple floor. The main house, which had previously been owned by members of only two families, made them draw a deep breath—and not in a good way.

The home’s primitive “locking system,” as the couple jokingly calls it now, was the least of their problems. Raccoons and mice skittered throughout the attic, creosote had leaked down interior walls, and decades of occupants’ smoking had tinged much of the interior a gritty tobacco yellow. Moreover, the elderly previous owner—a bachelor who had lived there since World War II—had evidently been a trapper who used a second-floor bedroom to dry skins.

“There was no indoor plumbing,” recalls Irena, “and only seven outlets in the whole house. The kitchen had a hand pump for water.” Looking at these aspects of the house, Mike and Irena knew what lay in store for them: countless coats of primer and paint to cover the dingy walls; traps and push brooms to rid the house of animals and their waste; and scrub brushes, strippers, and peels to remove paint from woodwork and clean plaster and brick.

Most couples would have backed away, mumbling excuses and grabbing for their car keys. Not the Guinnesses. They saw the old house as a blank canvas on which to inscribe their personalities while still respecting and restoring its original character. “We envisioned what it could become,” says Irena, “and we both liked it.” 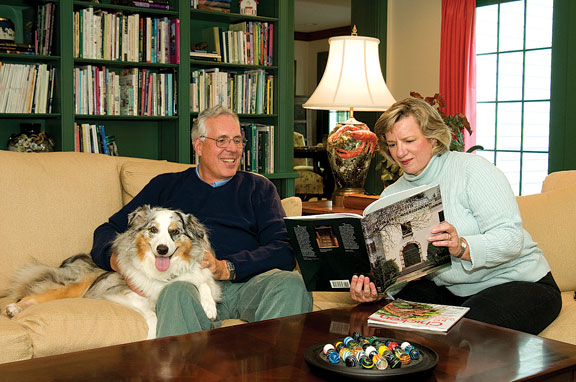 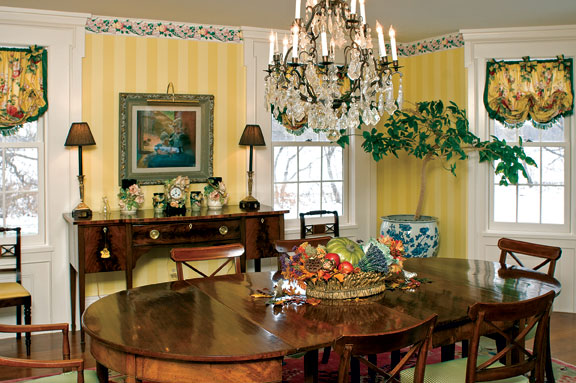 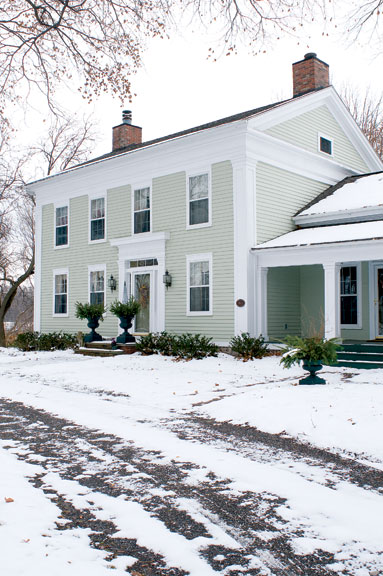 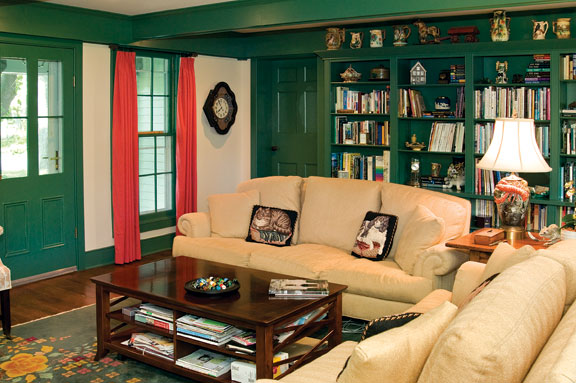 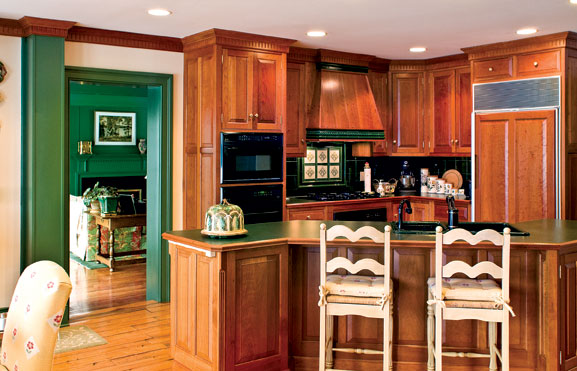 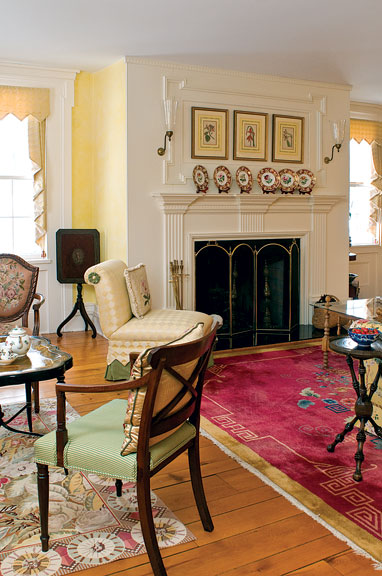 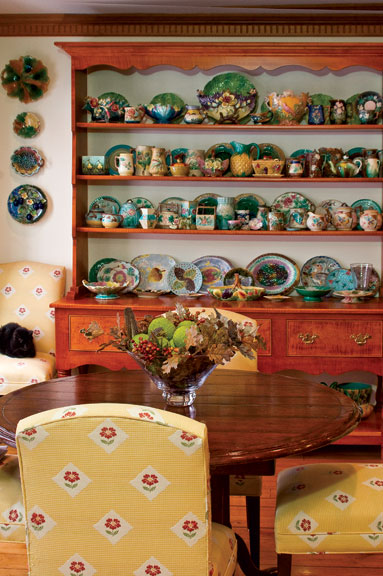 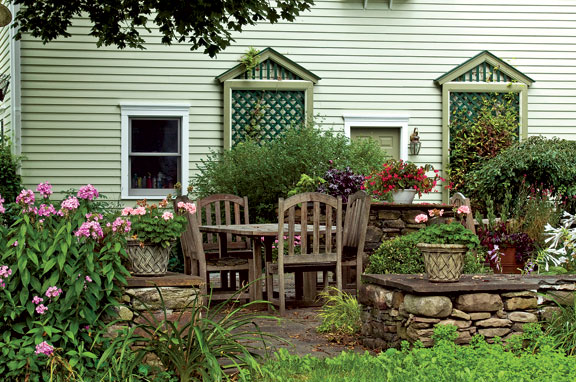 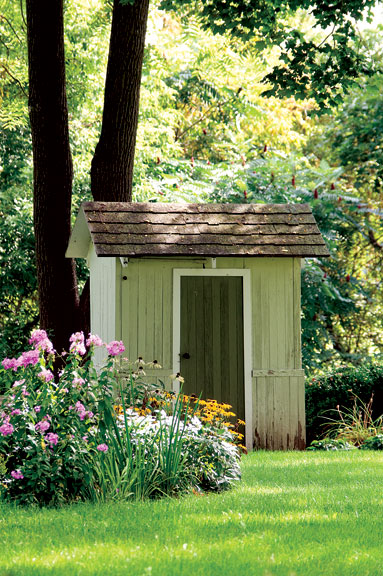 Instead of fretting about the inevitable crises that popped up—“When you’re restoring a house, things come up that you don’t expect,” Irena notes—they sat down and brainstormed their ideal version of the house. Irena took their notes and drafted a lengthy “mission statement” for the property. When the couple found an architect they wanted to work with—Rochester-based Mark Muller—Irena gave him this document asked him to use it as a Bible.

“We basically outlined every room in the house and how we wanted to use it,” Irena says. “It was about how we like to live, how we entertain. That we needed a lot of light. That any additions should be in keeping with the house—and look like they had always been there.”

But first, they had to tackle structural repairs—specifically, 16′ worth of cobblestone cellar wall that tumbled down when digging began on the foundation for a new addition. Luckily, the rest of the home was so sturdily built that it never shifted; the crisis was solved by replacing not just the stone in the wall, but also part of the basement’s cobblestone floor with a gravel floor that allowed them to incorporate French drains. “It was actually somewhat of a blessing,” Mike says.

The couple dismantled much of the first floor, but kept the floor plan largely the same. In the family room, they numbered each of the structural floor beams as they were lifted out, and put them all back in the same positions. All interior doors were also taken down, labeled, stripped, repainted, and then re-hung in either the original locations or other spaces in the expanded home that needed doors. “We reused every door we could,” Irena says.

The new kitchen, the most labor-intensive part of the restoration process, tapped the talents of regional craftsmen to create a design that echoes, rather than mirrors, an antique kitchen. Appliances and furniture are all new; the walls of built-in wooden cabinetry were created by cabinetmaker David Lapp, designed to store Irena’s collections of vintage linen and majolica and Staffordshire pottery.

Despite these updates, Mike and Irena wanted to keep the old, scarred chestnut floors in the kitchen, which proved to be a challenge to match with modern flooring when a bump-out addition along the back of the home was planned. Rejecting the contractors’ offer of a pine substitute, the couple hunted down closely matching antique chestnut in a New Hampshire barn. “They brought it in on a tractor-trailer!” says Mike.

The addition added 10′ along the back side of the house in the kitchen and dining room, allowing for extra eating and storage space and giving the Guinnesses room on the second floor to create a lofty master suite with cathedral ceilings, blue-and-white toile wallpaper, a white-tiled master bath, and a bank of windows overlooking their acres of back yard.

Irena, who adores gardening, was the driving force behind the yard’s landscaping. She had workers dig up the foundation stones of an old barn that had burned in the 1920s, and turned them into a rock wall, fencing in a naturalistic, curving garden behind the house. Water features and a paved terrace complete the space and give the couple a cozy outdoor spot to entertain and enjoy meals.

The street-facing front of the house was the only part of the structure that owners in the 20th century seemed to have kept up with any degree of regularity. (Even on the back of the house, Mike and Irena noticed with amusement, the newer coats of paint only went up as high as a man could reach.) It required just a few cosmetic tweaks and a color change to be photo-album-worthy. “We just gave it a good power wash and a coat of paint,” says Mike.

Walking through the Guinnesses’ fully restored farmhouse today, it’s hard to imagine that the home was ever anything but beautifully preserved.

An adjacent powder room, a study in raspberry, highlights the strengths that Irena’s artistic eye brought to the entire project: The walls are covered in a damask-like stenciled pattern she conceived and cut herself, then painted to achieve a vintage wallpaper effect.

Upstairs, other secondary bedrooms became walk-in closets, a home office, spaces for grandchildren and guests to sleep. (A secondary servants’ staircase in the house was sacrificed to free up square footage for these purposes as well.) An all-new addition on one side created formal living and dining rooms, done in yellow and red, with Liberty of London fabric on the dining chairs and Schumacher paper on the walls. Other sympathetic additions to the property include a large garage and an 1,100-square-foot guest suite, connected to the main house via a long hallway, that Irena’s mother lived in for a few years.

Looking back on their work, the couple sees these flexible uses of the vintage home’s spaces as a way to bring the 1825 structure into the 21st century, keeping it relevant and livable while still respecting its history. “If it’s going to be a museum house, that’s fine,” says Irena. “But if a home is going to be lived in, it has to work for today.