Homeowner Anna Anderson is a hard-working professional who has a coterie of adorable pets: Wally the faithful Corgi, Lars the cool grey cat, and Vern the inquisitive Cornish Rex (cat). They inhabit one of the coziest mid-century houses on Portland’s West Side. Since Anna’s renovation, it’s big enough for family and friends to stay over.

“I loved that the house had some English cottage style, as half my family is British,” Anna says. She found it when she and her friend Karla Pearlstein were driving in the area nine years ago and noticed a for-sale sign. “When we got inside,” Anna recalls, “I loved all the old-house fabulousness: coved ceilings, a curved hallway wall, an original kitchen with a tower-like rotunda, built-ins and solid wood doors, original leaded-glass windows, and period hardware.”

Karla Pearlstein is a renovation specialist. She recommended that Anna make a few simple fixes to the original kitchen, by adding new Marmoleum countertops edged in stainless steel and red Marmoleum flooring with a black Art Deco strip. These were modest suggestions, unlike the costly and not really appropriate granite upgrades so prevalent today. For an accent wall, Anna chose a 1940s pattern from Karla’s collection of vintage wall coverings, and had it reproduced. The 1940s gas range came from BeeJay Stoves in Portland.

Then, in 2012, Anna decided to build an addition to provide more storage, a laundry, and a family room that could serve as guest quarters with its own bathroom. Karla and home designer Matthew Roman stepped up. “The house,” Matthew says, “didn’t really engage with the backyard. Creating an L-shaped family room wing framed the yard and defined the two sides of the garden.”

“When I’m in this part of the yard,” Anna adds, “the family room separates us from the neighbors, providing privacy. If I’m in the addition reading, it feels like I’m in a greenhouse, because there’s such a connection to the yard.”

In this phase of the renovation, the kitchen also underwent some exciting changes. Karla recommended ameliorating some of the DIY kitchen work done by the previous owner, which had included inserting a small dishwasher in a cabinet near the refrigerator. “Anna does a lot of entertaining and needed a more substantial dishwasher,” Karla notes. She suggested installing a fully integrated Fisher & Paykel dishwasher to the right of the sink, and relocating the old drawers to the butchered spot.

Next to go was a plywood counter in the rotunda, where bent steel with sharp corners had stabbed Anna a few times. Mike Edeen at Artisan Woodworks devised an undulating stainless-steel counter edged with stainless steel trim. “Its flowing, rounded edges are very sexy, very Art Moderne,” says Anna.

Before the addition, a hall adjacent to the garage led to the back door. That exterior door was relocated to be used as a side entry in the garage. The hall was extended into the addition. But the red Marmoleum tile flooring, added by Anna in 2006, had been discontinued.

“Karla had a great idea,” Anna says. “We popped out some of the existing red tiles in the red and white checkerboard, and intermixed them with grey Marmoleum.” The same grey flooring was used in the new bathroom.

The entire addition, in fact, echoes many of the quaint design elements already in the house. Most strikingly, the new rounded guest shower repeats the rotunda in the kitchen, referencing even the original use of glass block.

“Anna had requested a large shower,” says Matthew, “and the circle with curved walls maximized the space.” His original drawing included high transom windows to admit light. But “kudos to Karla for finding a source for curved glass blocks,” says Matthew. They chose Pittsburgh Corning Arque Block–IceScapes, which allows for smooth, tightly curved walls with consistent mortar joints. The dense pattern provides privacy: “I didn’t want to be an exhibitionist!” Anna laughs.

Aaron Sloper (Aaron Sloper Decor)helped Anna pull together the color scheme for the new family room. “I was really struggling with the wall color, trying to find the right blue that would stand up to the intense red wall in the new hallway.” Aaron found a deep teal blue that played well against the colorful furnishings he chose. “He was sensitive to the fact that I love orange,” Anna says. “But I couldn’t really have a massive orange couch. So Aaron found a Dania orange ottoman instead.”

Dana Griffith, who is owner and designer at Portland Furniture, assisted with the living room’s furnishings. “Dana knew I wanted bright colors,” Anna says about the yellow room; “she chose the navy couch, which I wouldn’t have thought of, but I absolutely adore it.” So, apparently, does Wally, the adorable dog who lounges there beneath the portrait of another Corgi.

“I wanted a place that was fun, with bright colors throughout,” Anna says. “But a place where you could plop down on the furniture. I feel like we’ve accomplished that.

“It’s been fabulous to offer family members who stay with me their own bathroom, and to ask neighbors over for soup night with plenty of room to spread out. This is truly a forever kind of home.”

TRUE TO STYLE UPGRADES
Two of the original leaded windows at the front of the house were beyond repair. Consultant Karla Pearlstein replaced them with salvaged vintage windows with ivy-motif stained glass, bought at an auction and refitted. The ivy windows in the little casements were custom made to match the salvaged windows.

Small, sloping copper roofs were added to protect the old windows in the living room and kitchen rotunda. Energy-efficient Indow interior storm windows were placed inside the living room’s casements, which open out.
The kitchen’s rotunda provided a cue for a new circular shower used by guests. The shower stall’s glass block echoes originals in the kitchen.

The new family room in the addition features a voluptuous curved wall, which draws the eye down the hall to the kitchen. It was modeled on a rounded wall in the hallway that leads to the master bedroom. 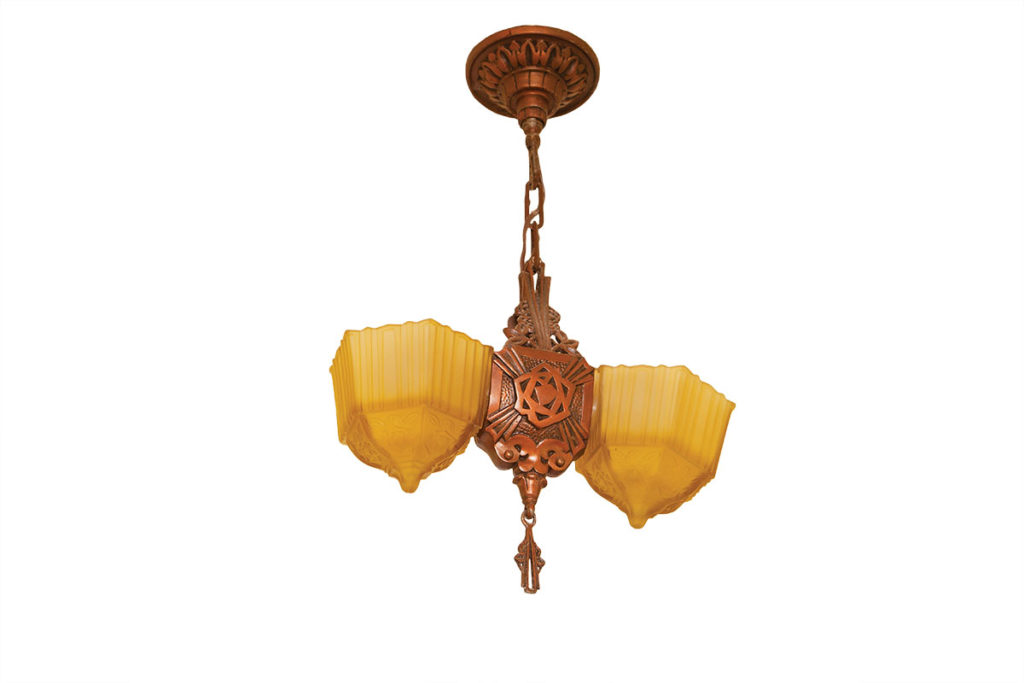 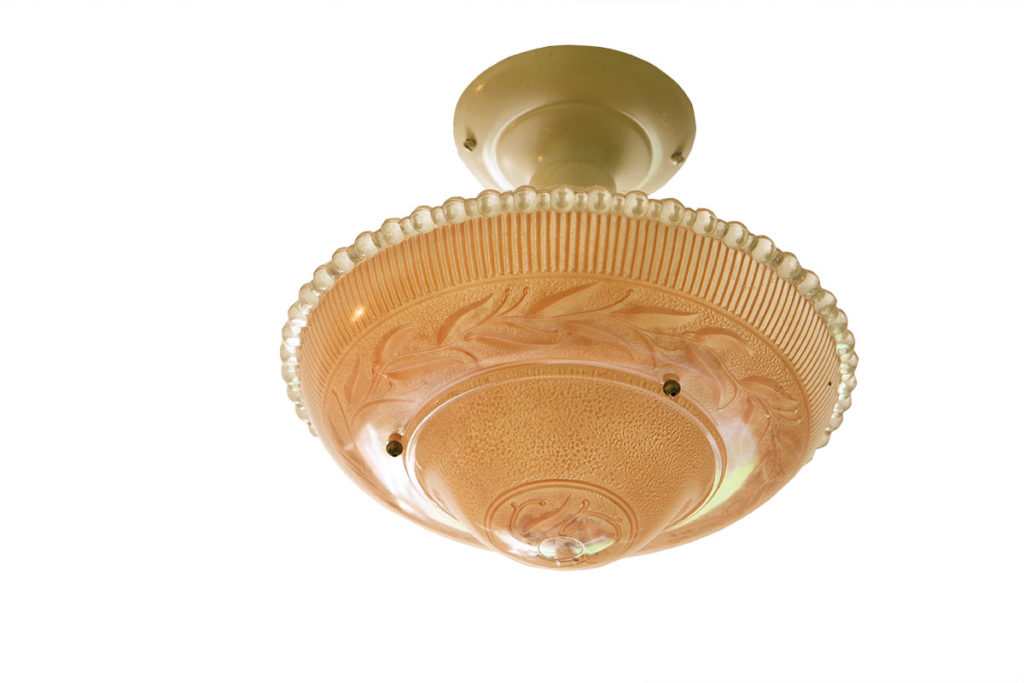 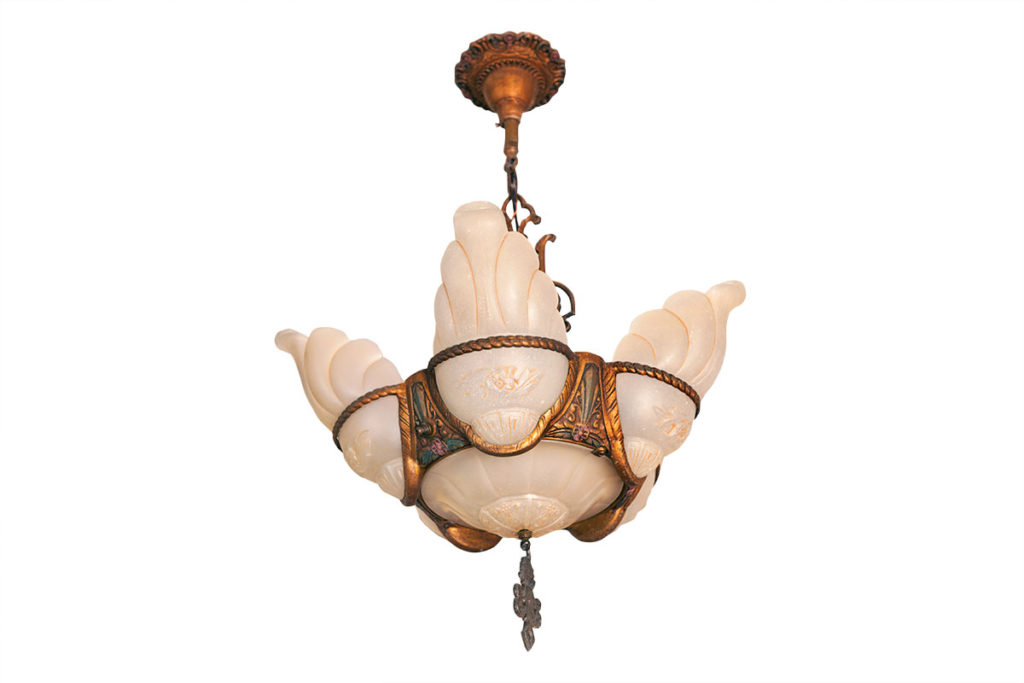 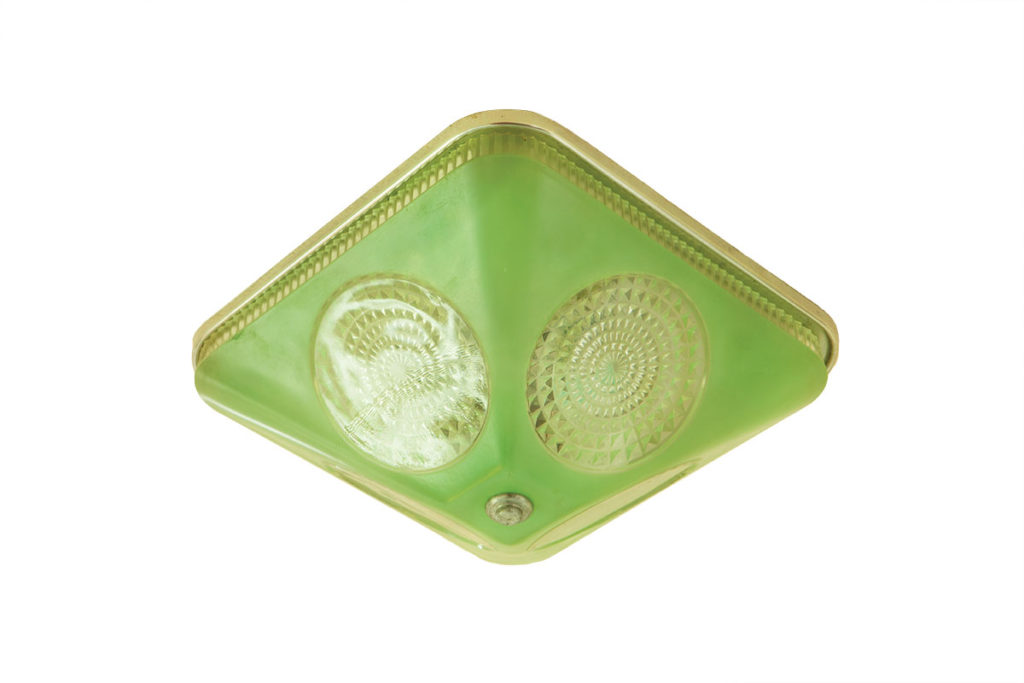 VINTAGE LIGHTING
When Anna Anderson bought this house in 2006, original lighting fixtures were either missing or unusable. Karla Pearlstein found numerous vintage chandeliers and ceiling lights that add color and character to each room. “I was playing off the Hollywood Storybook theme, so I went for slipper shades,” she says. 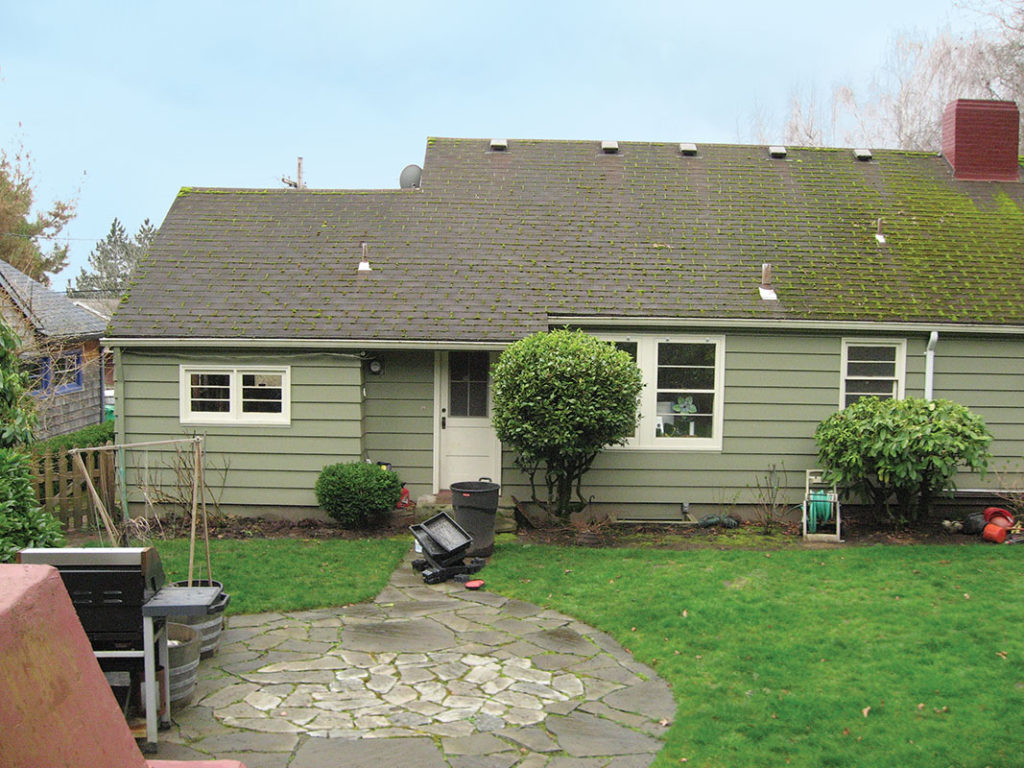 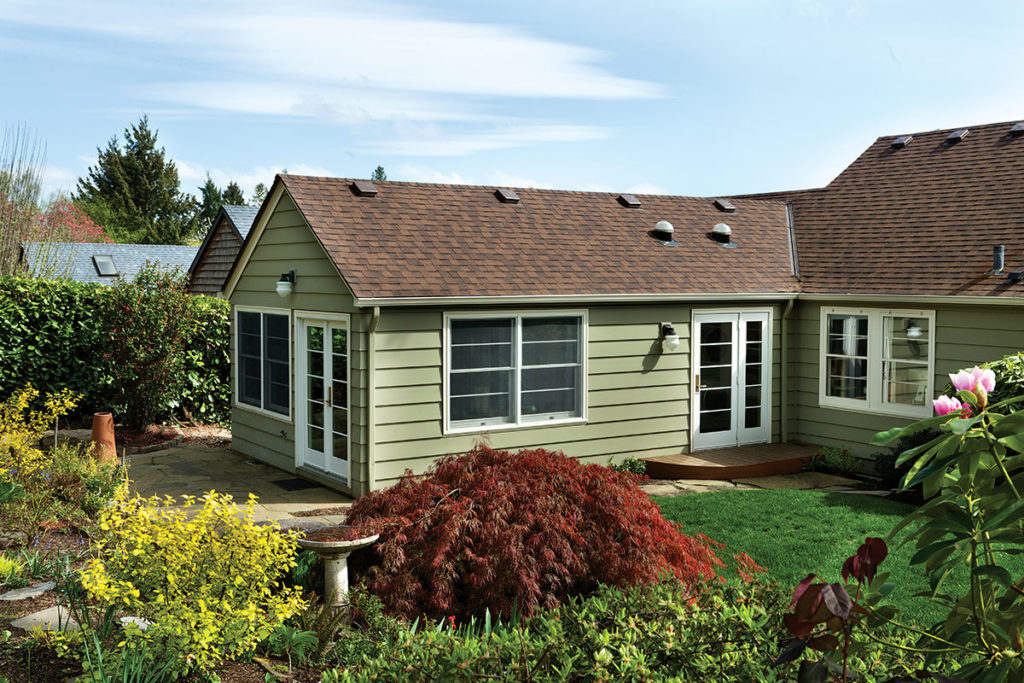 ADDING ON
The small mid-century house had an after-thought rear façade that didn’t engage with the backyard. The addition helped: designer Matthew Roman created a modest ell wing that frames the yard, providing privacy, and defines garden areas. “When I’m reading in the new family room,” the owner says, “it feels like I’m in a greenhouse, because there’s such a connection to the outdoors.”