When clients in Louisiana wanted to downsize, moving to a home on a bayou near where they’d always resided, architectural designer Terry Pylant and his team did their homework. “As precedent for the design, we studied the local vernacular,” says Pylant, referring in particular to the region’s French Creole cottages and traditional Acadian homes. “Our clients were well versed in the language of the local architecture, and wanted their new home to feel genuine. We toured the area, paying attention to nuances, to details we could work into the design.” Pylant is a senior principal at Historical Concepts, an architecture and planning firm whose guiding standard is to discover in each design challenge the essence of the project’s unique heritage and place.

Typically consisting of one main story raised on piers, authentic French Creole houses are distinguished in part by their generous galleries set below broad rooflines—usually hipped and double-pitched—and small rooms (cabinets) opening onto the galleries via French doors. Two of the best embodiments of the style that the design team researched are Magnolia Mound, in nearby Baton Rouge, and St. Joseph Plantation, in Vacherie, Louisiana, where the incredible craftsmanship of the enslaved people who built it is a poignant reminder of its past. The design was inspired, too, by the acclaimed architect A. Hays Town, who, in the 1960s and ’70s, was among the first in the region to salvage old building materials for use in new houses.

But it was something else that Town championed—the use of shutters—that especially resonated with Pylant. “The use of Bermuda-type shutters to enclose the porch was key in how we set up the façade,” he notes. Like the Creole galleries of yore, this one has two distinct enclosed spaces at either end, namely, a pantry to the left and a dressing room to the right. In between, the front door, with a fanlight transom illuminating the stair hall, is the focus of the façade. 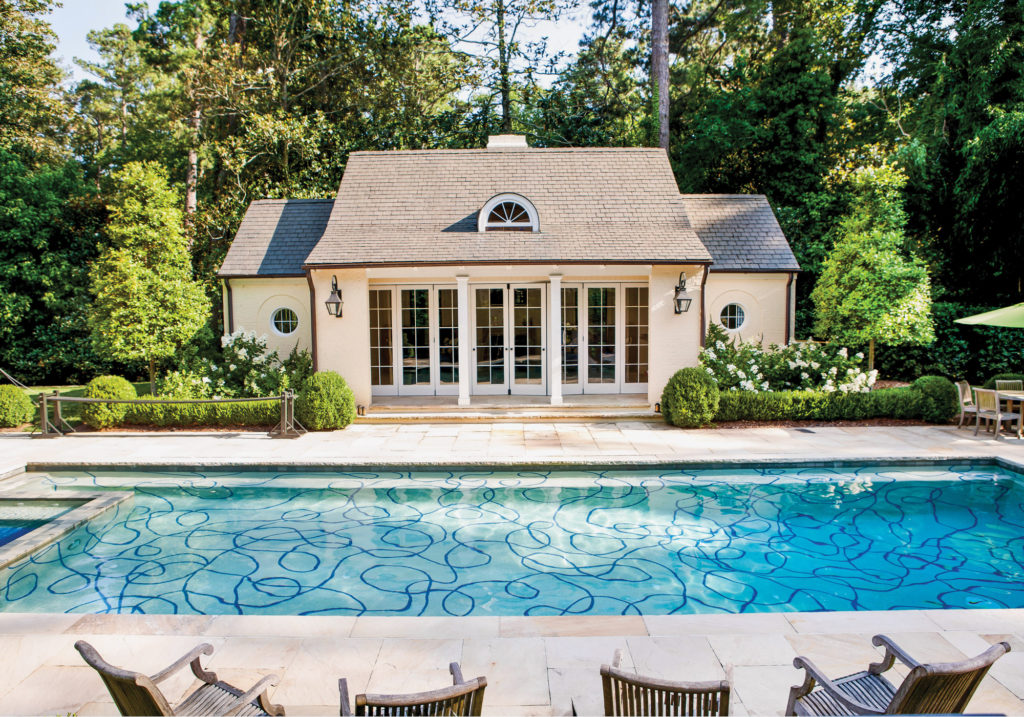 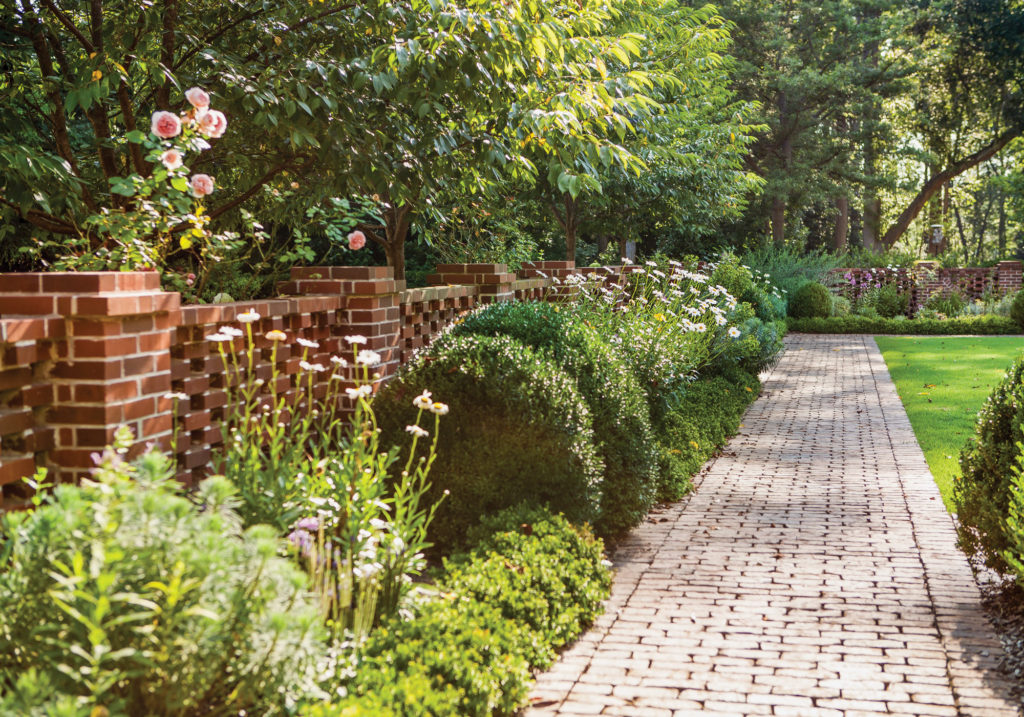 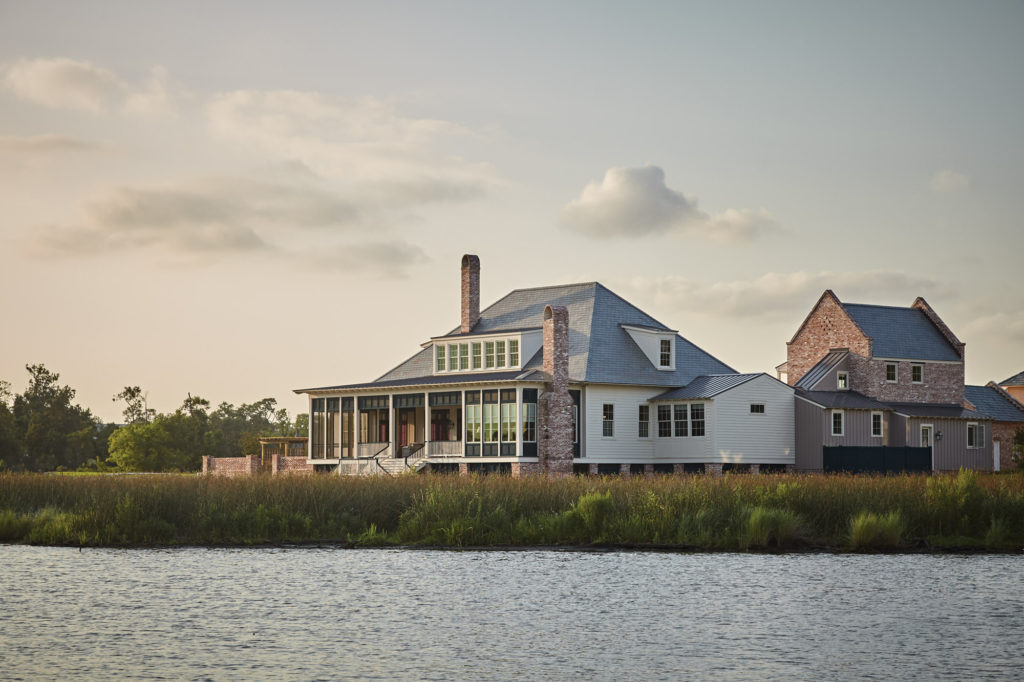 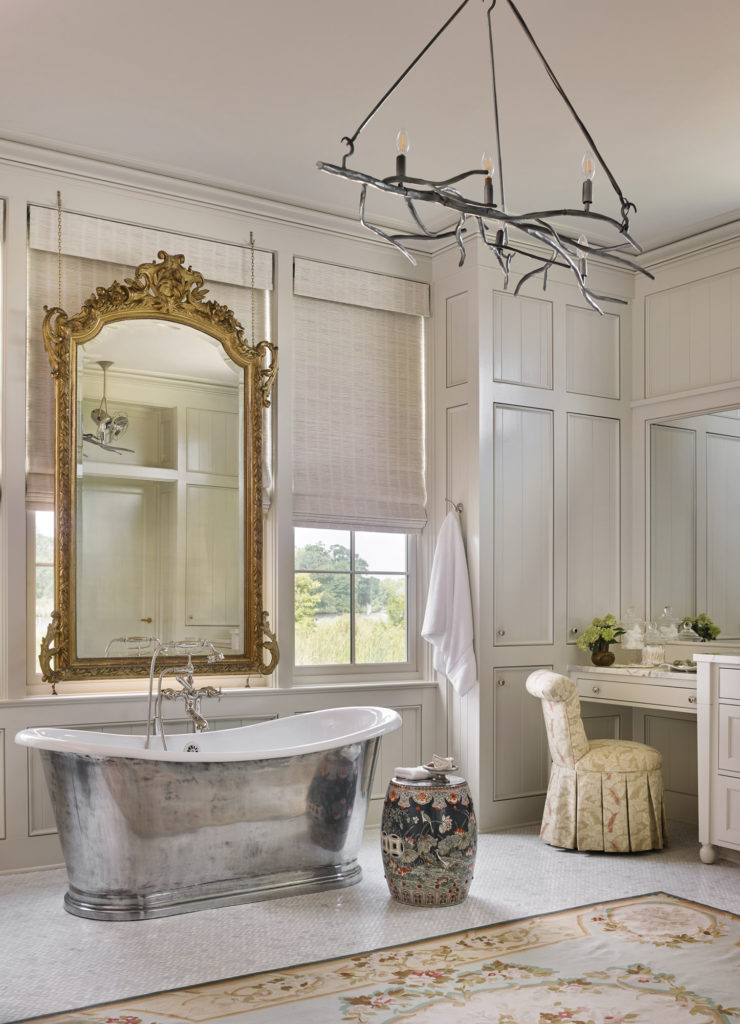 The rear porch runs the length of the house and has a southwestern exposure overlooking the bayou. This space makes strategic use of shutters, as well, in equal measure for privacy and for protection from the weather. The shutters are fixed at the top to provide shade from the harsh light of this exposure. Big and deep, well lit and with ceiling fans, the center of the porch is an extension of the great room, which has two sets of French doors. Enclosed by shutters, the master bedroom’s sleeping porch and a den off the kitchen bookend the gallery—which, Pylant says, “our clients use even in the hottest weather.”

For the interiors, he says, “We wanted something where a level of elegance is still casual. The homeowners had previously lived in an A. Hays Town house, so they appreciate the classical proportions and details that would give their new house a solid and timeless feeling.”

Working with Atlanta-based interior designer Carter Kay, the team achieved a melding of formality and simplicity. Gorgeous moldings and wood details are highlighted (almost no drywall was used in the house), the views are emphasized, and the scale of the home’s tall ceilings and oversized windows have been respected.

“The way Terry [Pylant] situated the house is beautiful,” says Kay; “being two rooms deep, it has light all the way through. It was up to us to come up with a mostly open floor plan that would give the clients three different areas to enjoy—family room, dining space, and a tighter seating area around a fireplace.” To do justice to the antiques and heirlooms the clients brought with them, walls, ceilings and door trim throughout are painted the same neutral color, differentiated only by sheen. One exception is in the den, where paneling in cypress, a wood indigenous to the area, and a floor-to-ceiling brick fireplace lend coziness to the space. This brick, with an old look to it and popular regionally, appears prominently in two structures flanking the main house: a carriage house, and a pigeonnier, a peculiarly French form of the dovecote in the Creole building tradition.

Both husband and wife are good cooks and also like to host catered events. “The kitchen had to be very functional,” says Pylant; a large, adjoining butler’s pantry with supplemental refrigeration allows expansion of prep space when needed. Sleeping space is similarly flexible. Besides the first-floor master suite, two guest bedrooms and baths are upstairs, plus sleeping quarters in the carriage house.

“The trend is to have an [open] flow,” says Pylant, “but we’re also rooted in history. Our modus operandi includes having a touchstone to the past.”