While the finished product, a new brick wall, may look deceptively simple, bricklaying is a fine art, a skill that demands precision at every turn. Imagine the masons’ confusion, then, when architect Charles Hilton stopped by a worksite of his one day, and said to the craftsmen: “Throw away your transits, your plumb lines. Just do it by eye.” His encouragement of a free-style approach got the architect just the result he was after: more than 200 half-timbered bays infilled with brick laid randomly so that no two patterns are alike.

Over his 40-year career, Hilton has put much thought into classical architecture’s role in the modern world.

He is a stickler for getting even the smallest details right, no matter what genre he is building in. But for this project, a French Norman manor house in Greenwich, Connecticut, the definition of “right” was sometimes counterintuitive. “It didn’t look rustic enough,” says Hilton. “In the old days, they weren’t doing all that
stuff to lay the bricks perfectly straight.”

Between the 15th and 17th centuries, in the Normandy region of France, the rural vernacular was expressed by post-and-beam dwellings clad in brick, stone, stucco, shingle, or any combination thereof. Functional and decorative half-timbering on a portion of the façade was ubiquitous; other features included multi-pane windows, dormers with hip or shed roofs, and plank-like entry doors with large, decorative, wrought-iron hinges. Barns were attached to the living quarters, and there was a central tower for the storage of grain or silage, usually cylindrical but in some instances square or octagonal.

The French manor house, a revival style that harkens back to medieval European architecture, inspired Hilton, whose charge was to design a residence on a 13-acre property where, over the span of two decades, he had left his mark on a variety of projects: a Georgian house, a gazebo, a pool house, a tool shed, and other service buildings, all complemented by landscape architect Charles J. Stick’s orchards, berry fields, and magnificent gardens appointed with sculptures and follies. But it wasn’t until a trip to France brought Hilton to the Hameau de la Reine at Versailles that his stylistic hunch for the house in Greenwich was affirmed: “I loved the scale of the structures, the earthiness and tactile sense of the materials, and the playfulness of the designs,” says Hilton. 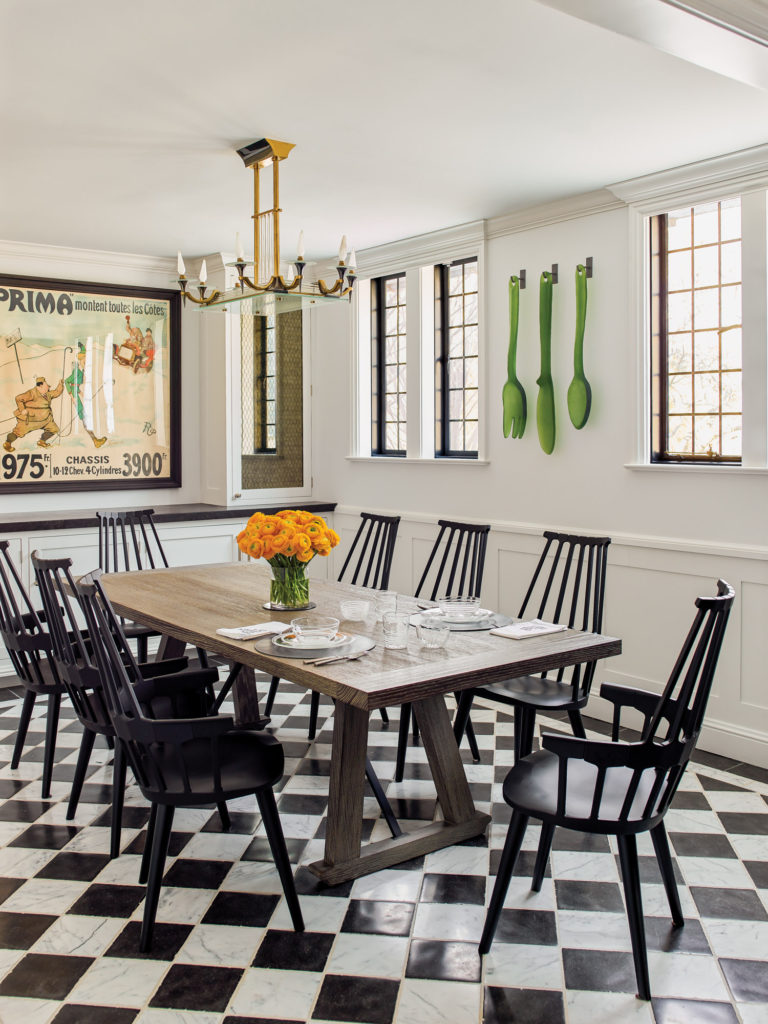 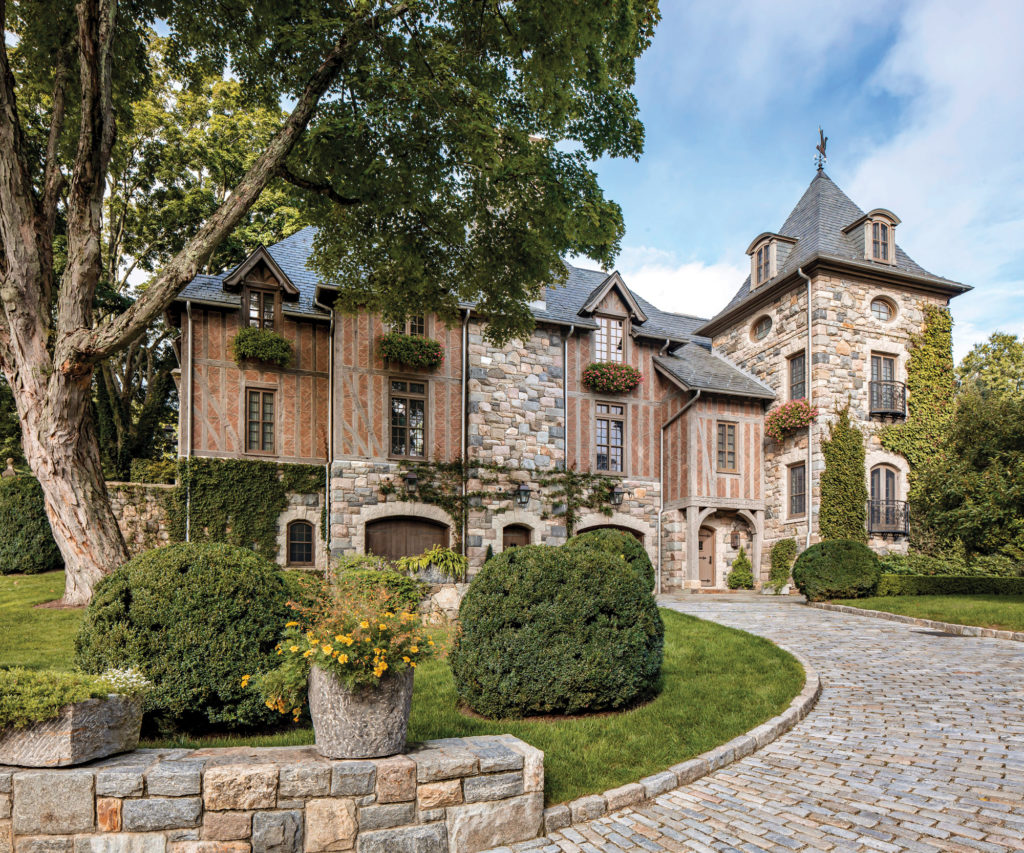 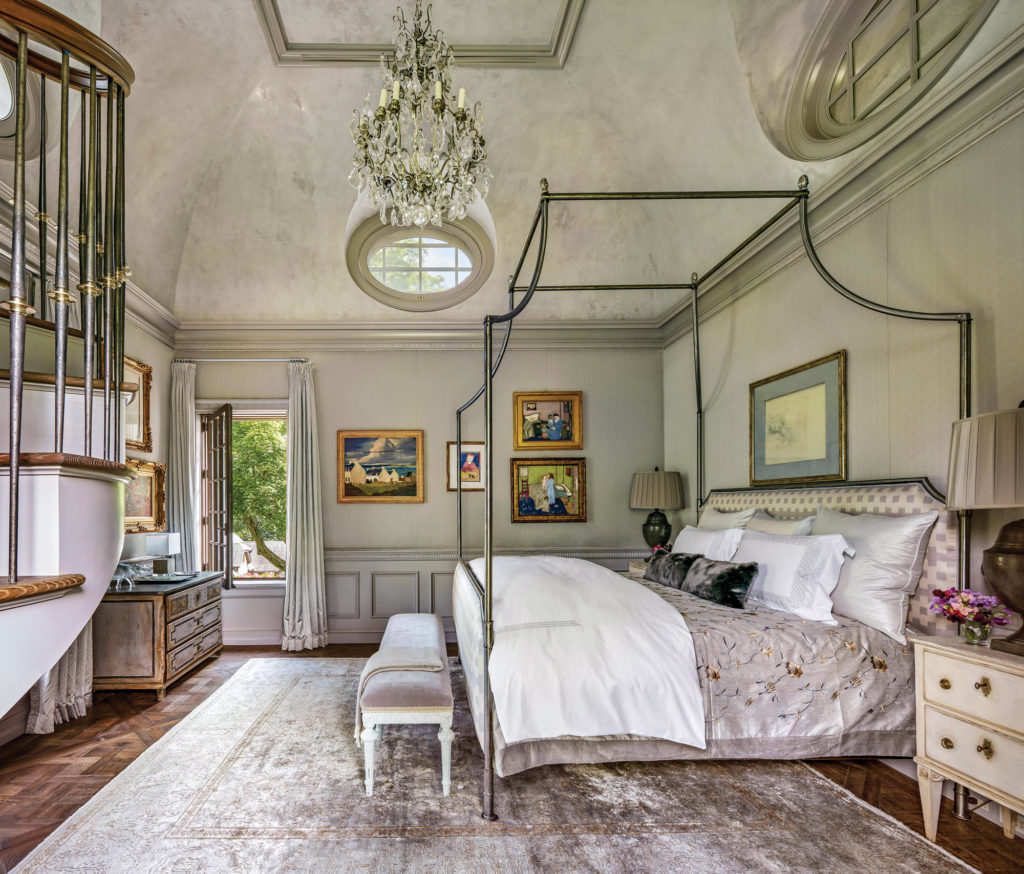 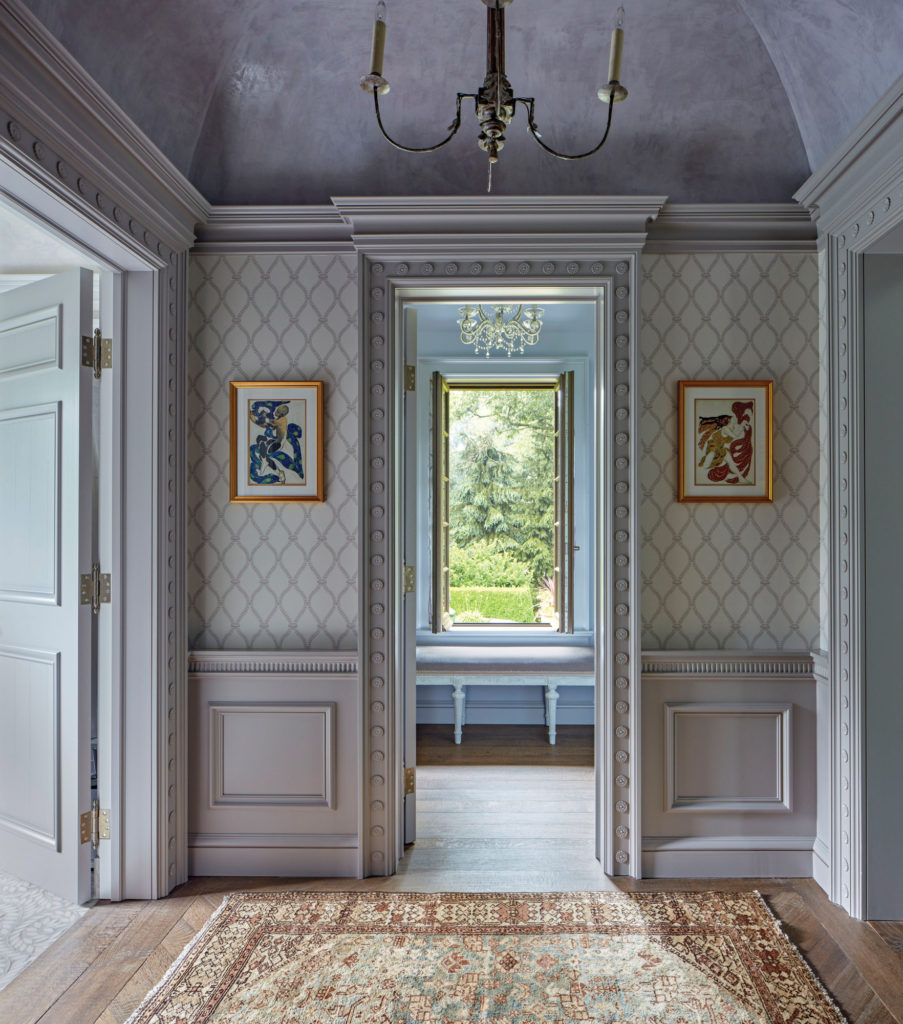 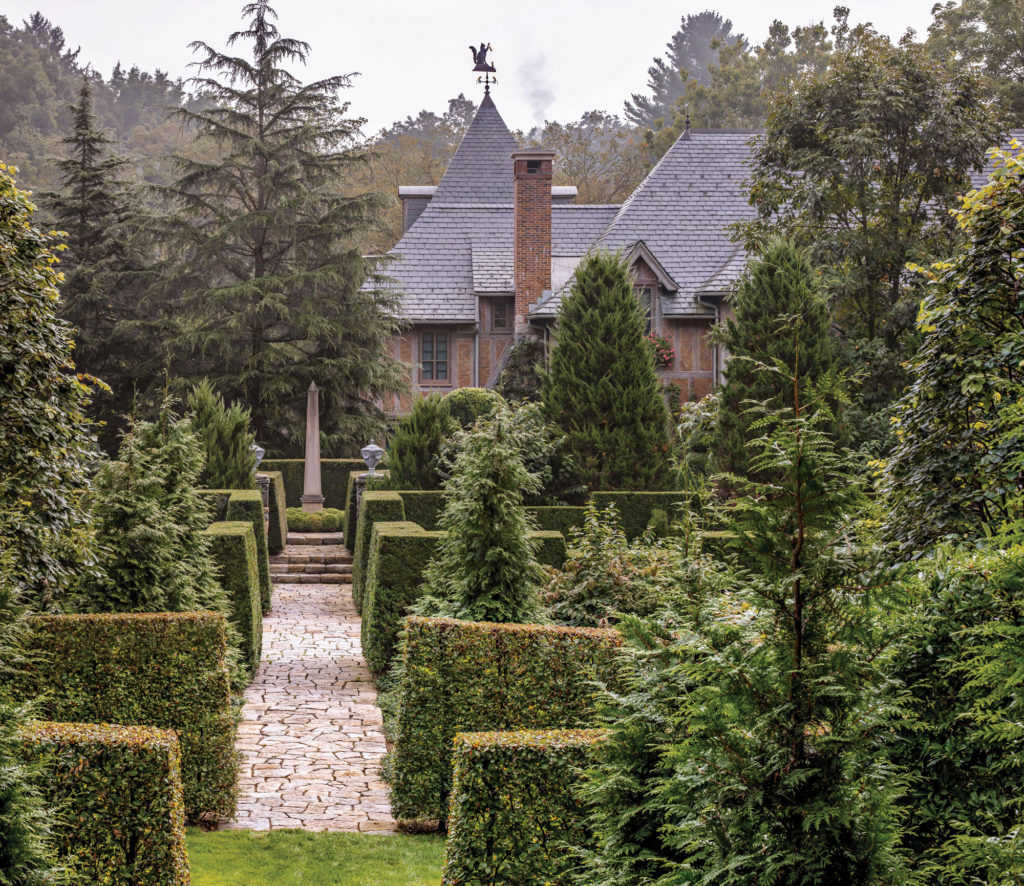 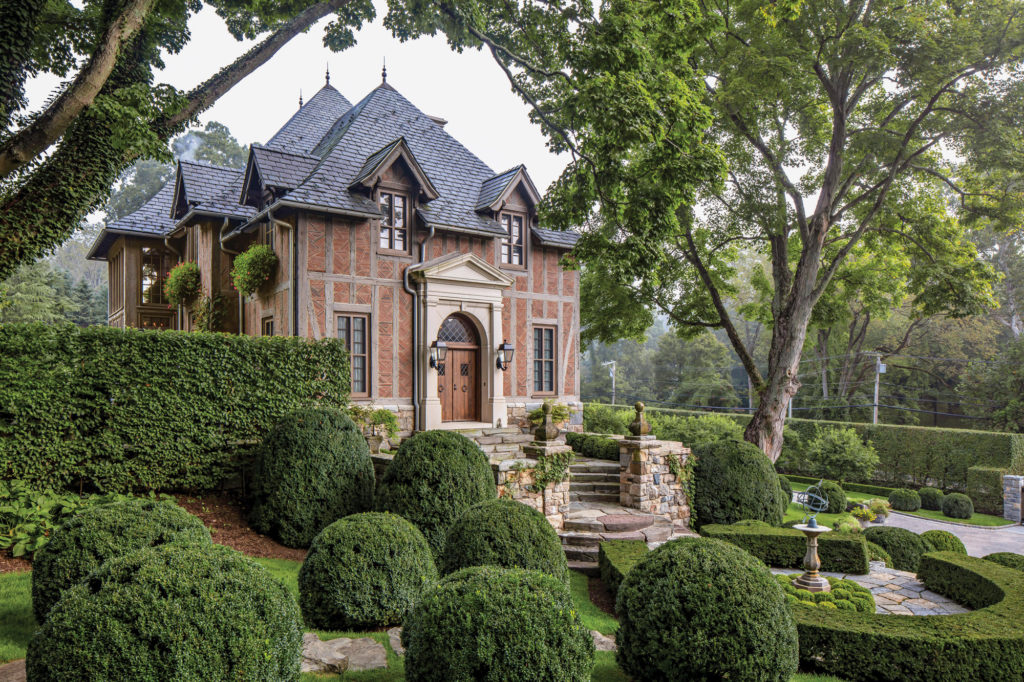 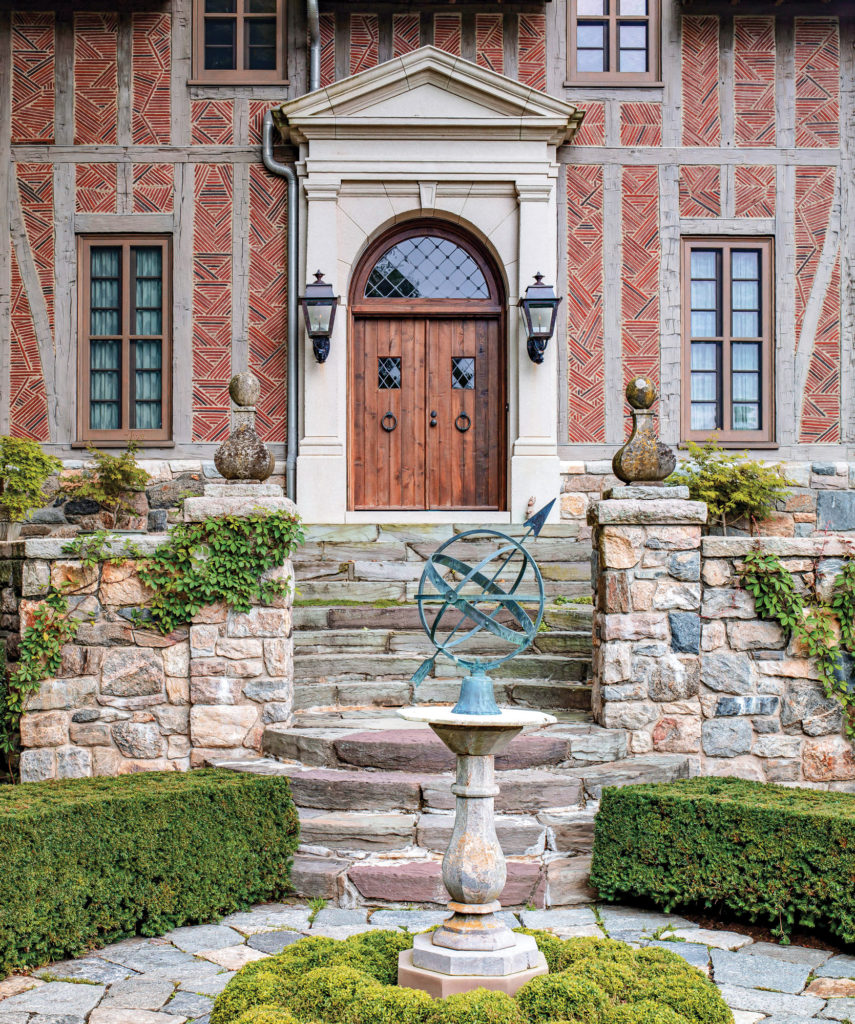 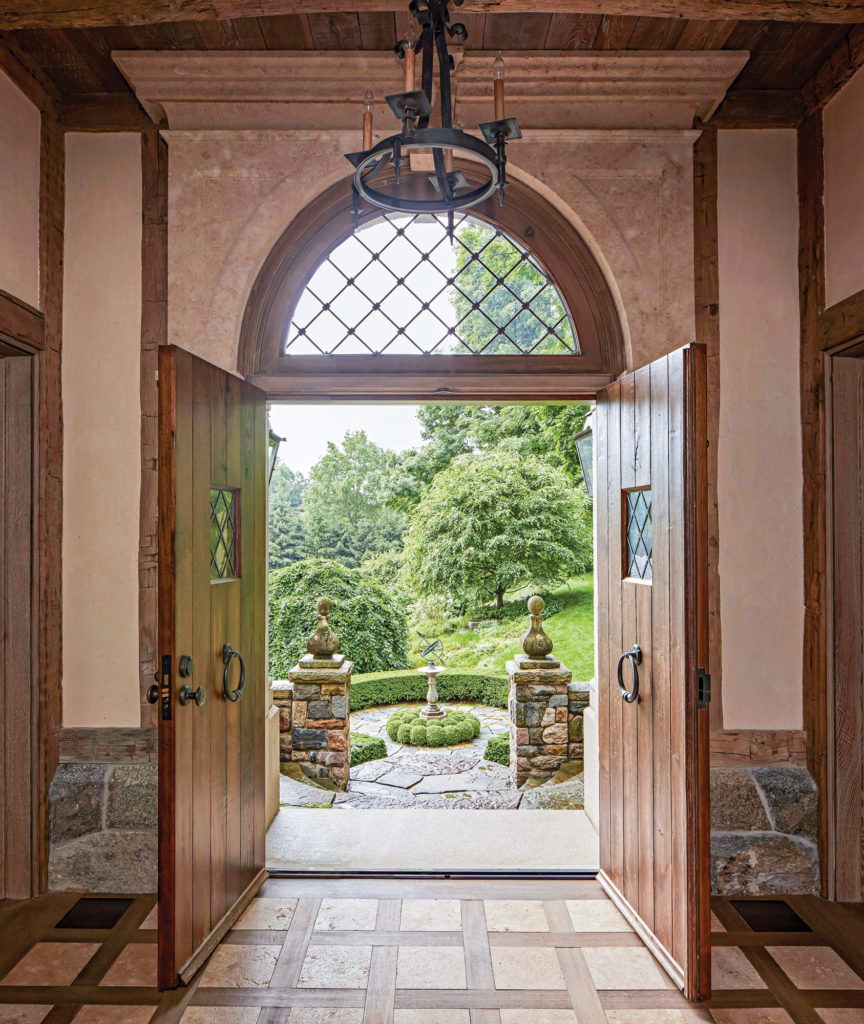 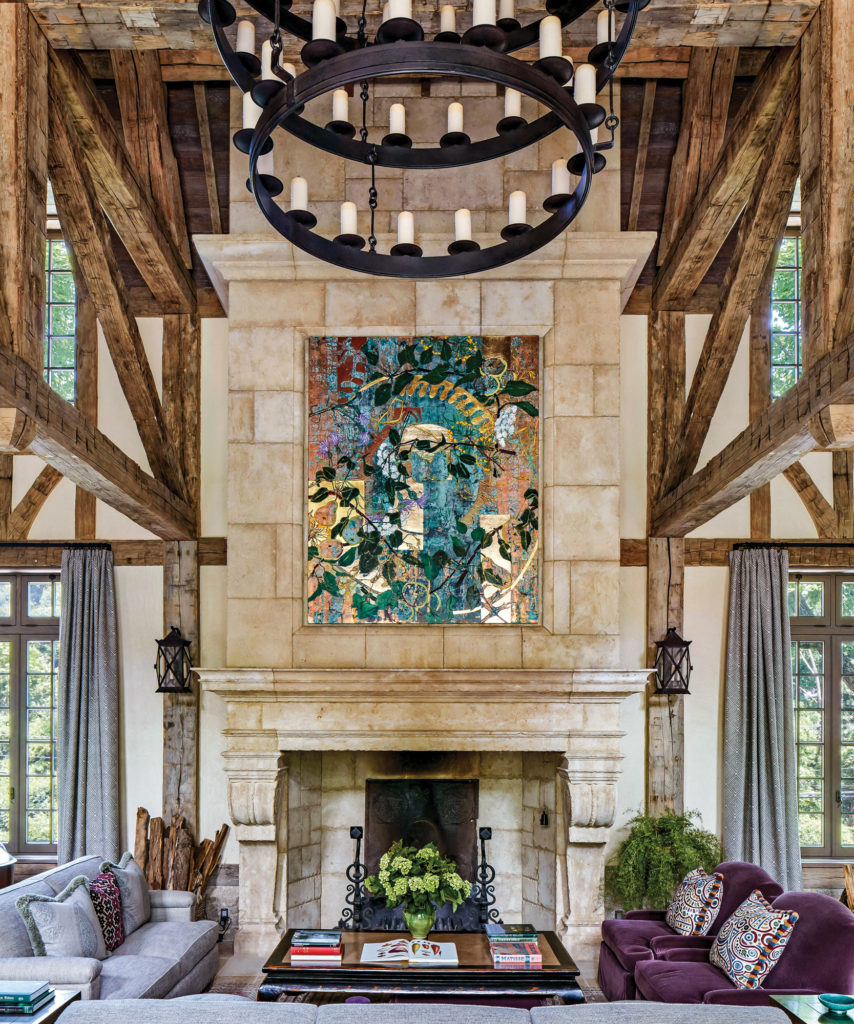 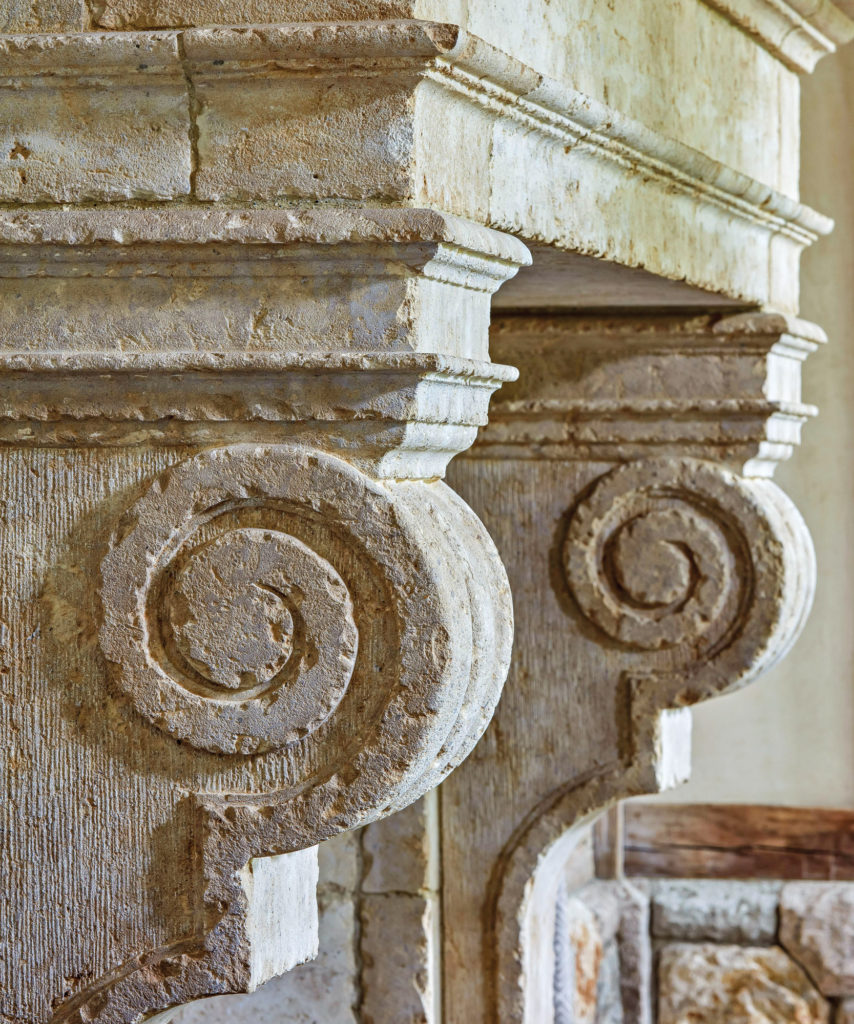 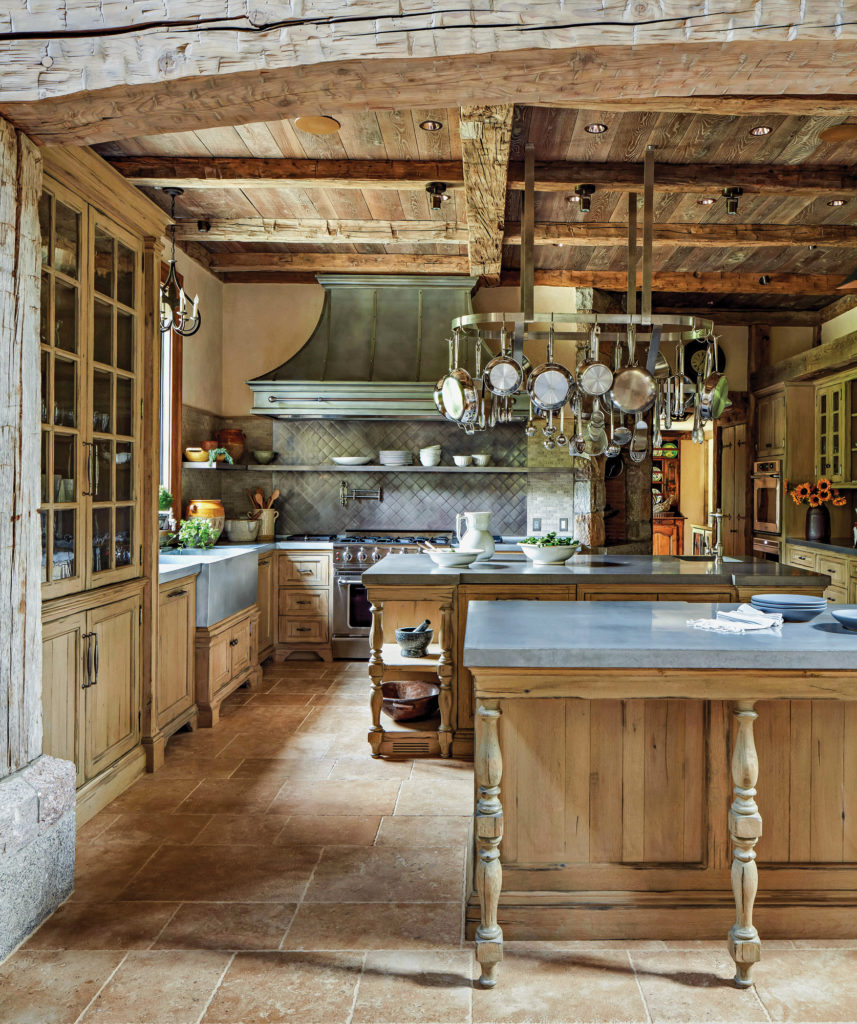 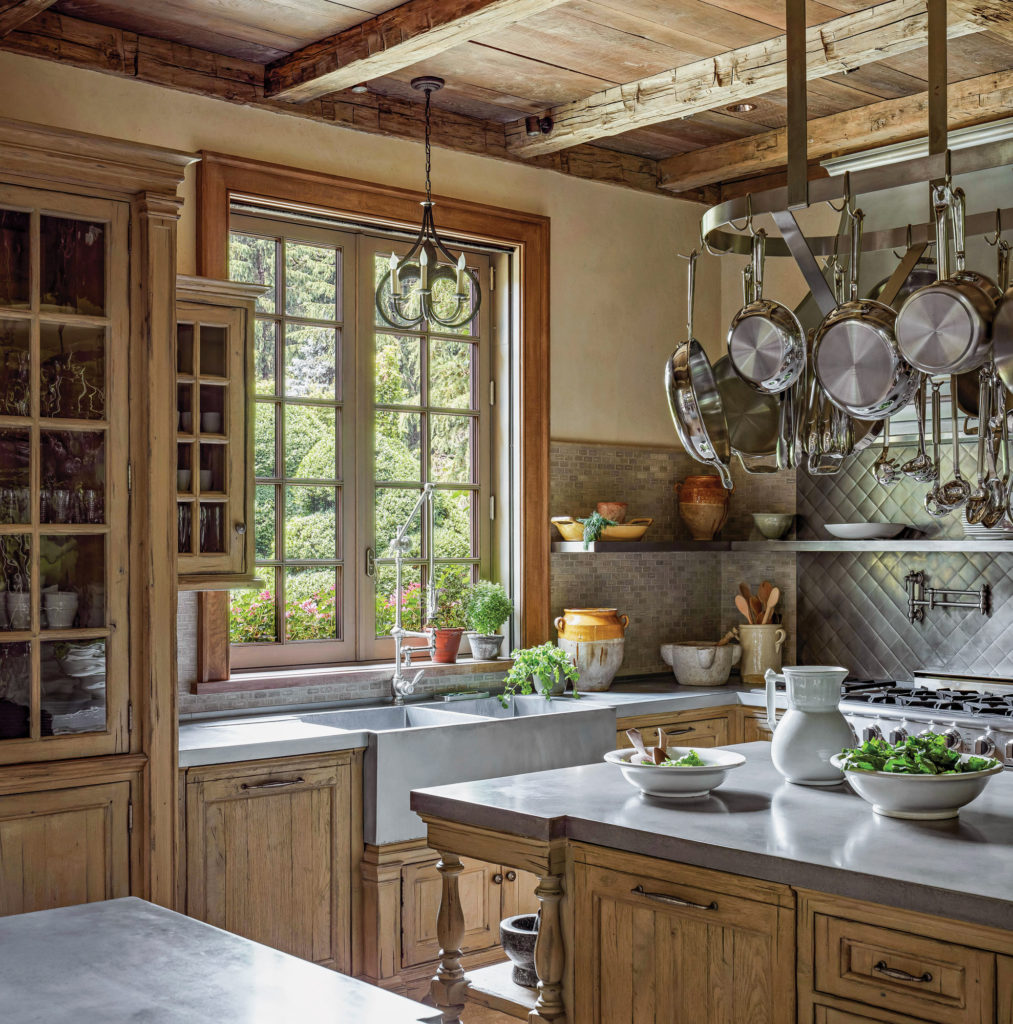 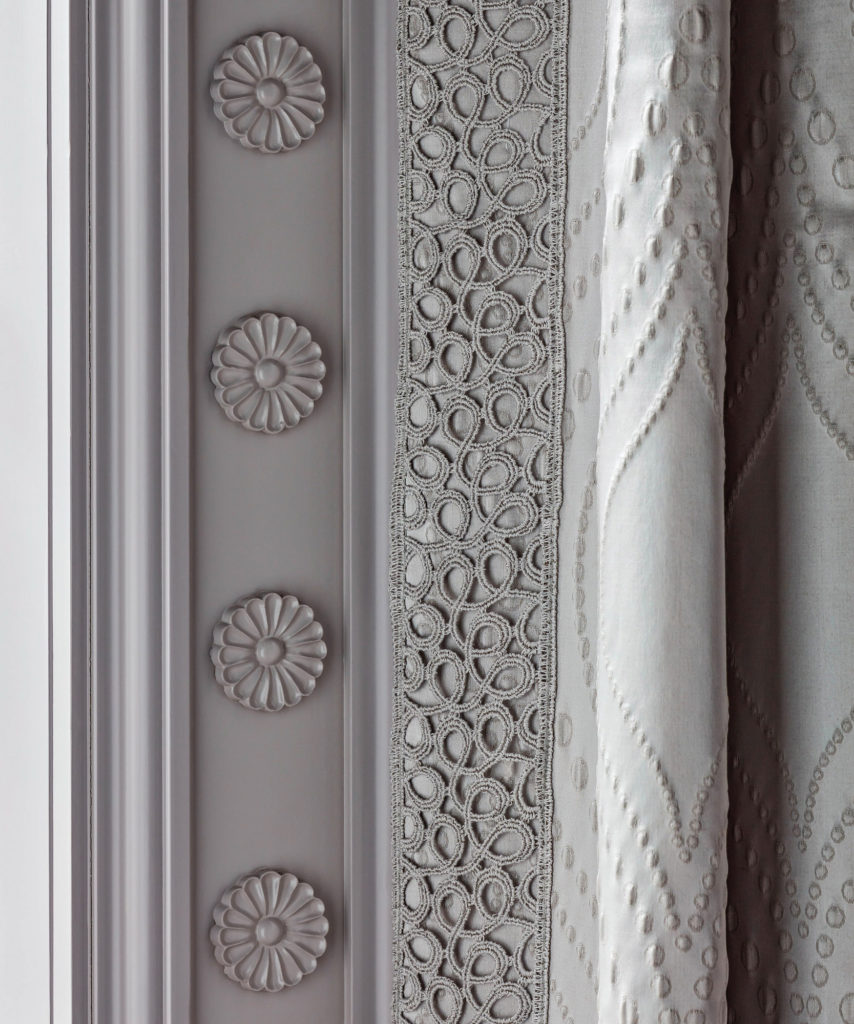 Built for Marie Antoinette in 1783, the rustic Queen’s Hamlet so captivated the architect that he snapped hundreds of photos, and once back in Connecticut, he announced to the homeowner, “I’ve found our aesthetic direction.”

Hilton says, “It was really appropriate for the agrarian feel we were trying to create,” explaining that his clients (husband and wife are both avid gardeners and cooks) dreamed of having their own organic farm. “We used brick, slate, and stone, which were the materials we used on the main [Georgian] estate, so there was a tie to the materials used earlier, making it stylistically compatible yet distinct.” In contrast to the Georgian dwelling, the French Norman building, referred to as the Barn, is less formal in structure and uses more casual materials.

“Once we selected the architectural direction, we tried to stay fairly pure to that inspiration,” says Hilton, “but we have to build for our local climate and to meet today’s codes.” So, for example, whereas an authentic French Norman house would have been built with native beige limestone, they used Connecticut fieldstone, knowing that limestone wouldn’t hold up well in the New England weather. To get one particular effect they wanted without using French limestone, “We had an off-white granite carved for the front door surround and some other accents,” the architect explains. Fieldstone for the base matches the stone walls on the property, a vernacular treatment. In lieu of authentic oak windows from France, which were beautiful but lacked proper weather-stripping and screens, Hilton turned to Artistic Doors and Windows in New Jersey, who replicated the casements based on a traditional French knuckle meeting-stile detail, customizing them in a way that was true to period and style. To get the right, period-appropriate colors, sizes, and shapes for the Roman-brick nogging, Hilton commissioned custom bricks from Ludowici, who typically produce terra-cotta roofing tiles.

The French Norman aesthetic continues inside, where authentic materials were used more faithfully than on the exterior, since weather factors weren’t a concern. The great room’s dramatic walk-in fireplace was a thoroughly transcontinental collaboration—the U.S.-based architectural team supplied drawings to a quarry team in France who cut, carved, and antiqued the surface texture of the French Camargue limestone pieces before shipping them to Greenwich. With its massive hearth and 30-foot height, the great room is the focal point of the dwelling and sets its prevailing style, overseen by designer Isabelle Vanneck.

The soaring ceiling is composed of antique timber planks supported by a dramatic system of antique, hand-finished timber trusses that replicate the old construction. Greenwich-based Stephen Gamble finished all the distressed stained wood, antiqued the casework, and skillfully applied the imported French plaster.

Adjacent to the great room, a 27-foot-long timbered arch announces the entryway to the kitchen, a near professional-grade workspace where rustic period details, including French Camargue limestone flooring and oak cabinetry, set the stage for such complementary elements as extra-large concrete countertops and other modern amenities. The tower, from top to bottom, houses an office, the master bedroom, and a 250-square-foot wine cellar, where several thousand bottles can be stored.

Charles Hilton’s French Norman manor house took shape on a trip abroad, so it’s apt that the architect says this about its detail- and labor-intensive execution (along with seven other buildings on the property): “It’s a journey I didn’t know I was going on when I started,” he says. “I’m definitely lucky!”