In the rolling countryside of Salt Point, New York, sat an 1840s Greek Revival with a history as rich and varied as its democratic style. Known as the White Pillars Farm, the stately house had “good bones” but needed work after sitting in quiet decay for years—and a few very unfortunate additions didn’t help the condition of the house. Although the building needed a major overhaul, a professional couple looking for a weekend getaway fell in love with the historic 120-acre farm complete with pond, open fields, and evergreen forest. Just over an hour from Manhattan, the commute was convenient for weekend visits, so they purchased the house and set about looking for an architect who could help with the renovations.

The couple had seen the work architect John Murray had done to his own Greek Revival farmhouse in Chatham, New York, and they knew his firm, John B. Murray Architect, could help them with their project. “The house is a wonderful example of the Greek Revival style,” says Murray. “It also has quite a colorful history.” In the 1940s James Forrestal, Secretary of the Navy and then Defense under Presidents Roosevelt and Truman during World War II, purchased the property. The house was full of wonderful memorabilia from that era, including old photographs of hunting parties and social gatherings. In fact, Roosevelt himself used to make the short drive from Hyde Park in his convertible to visit the home. 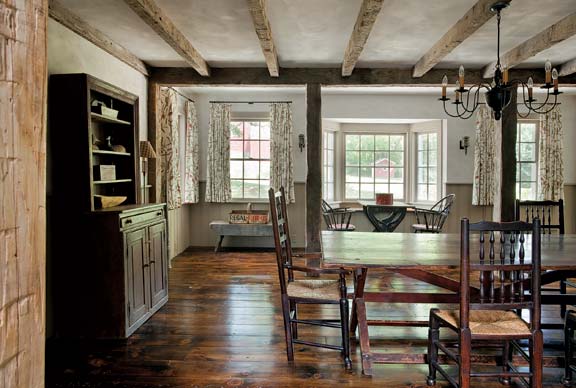 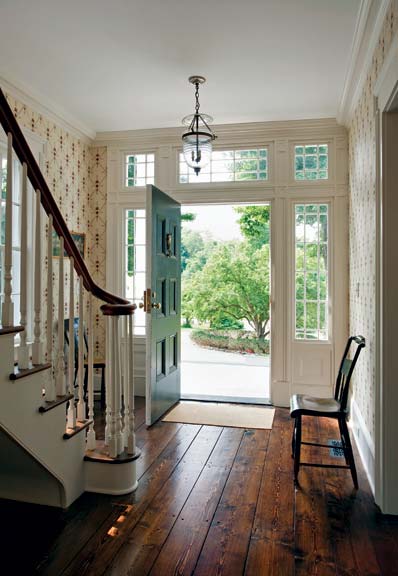 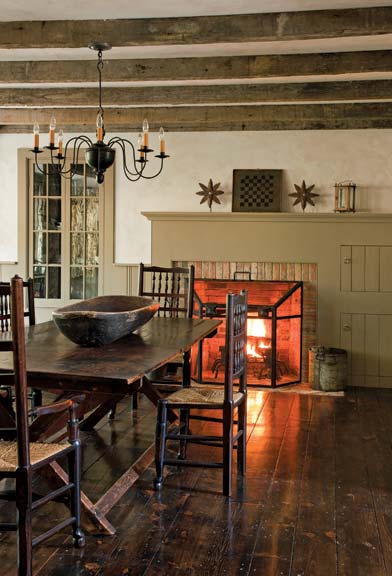 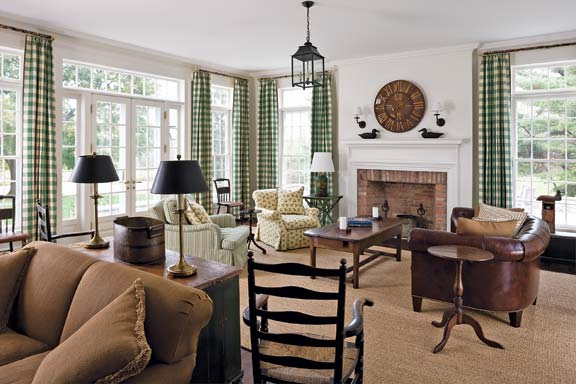 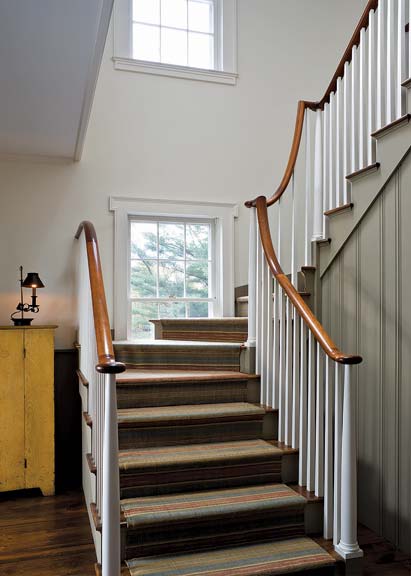 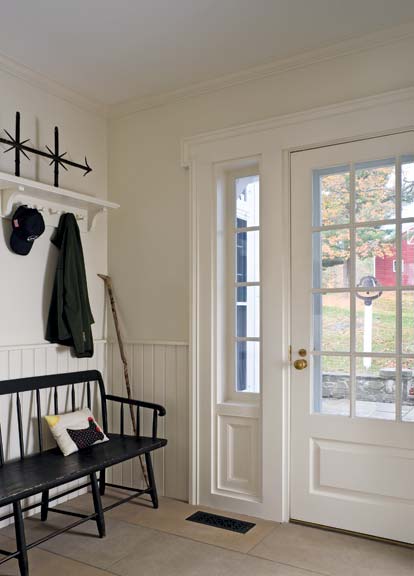 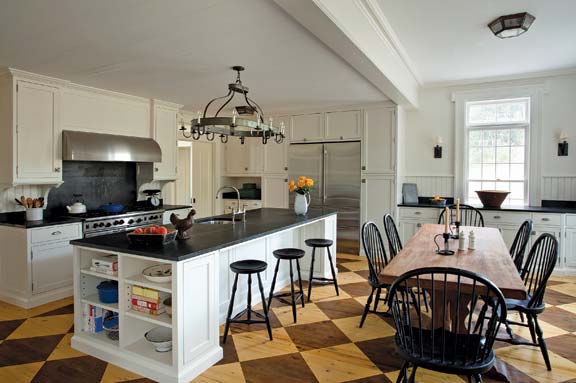 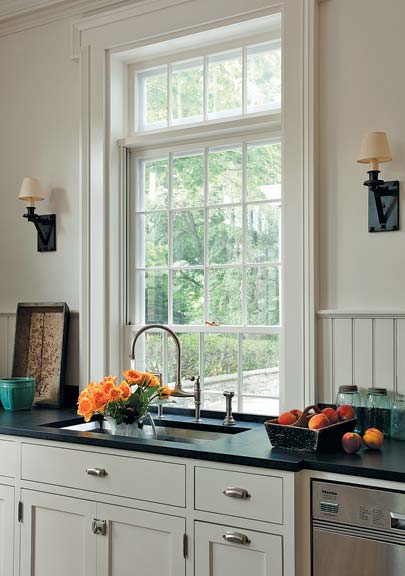 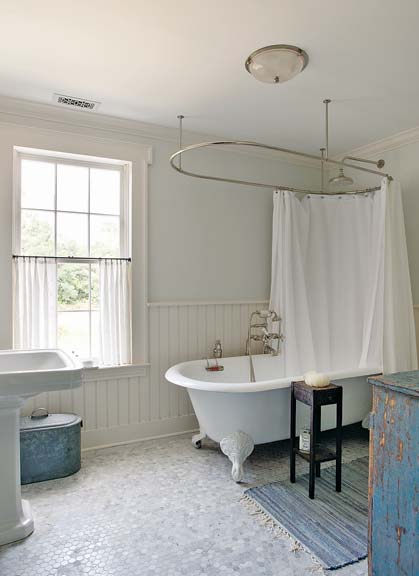 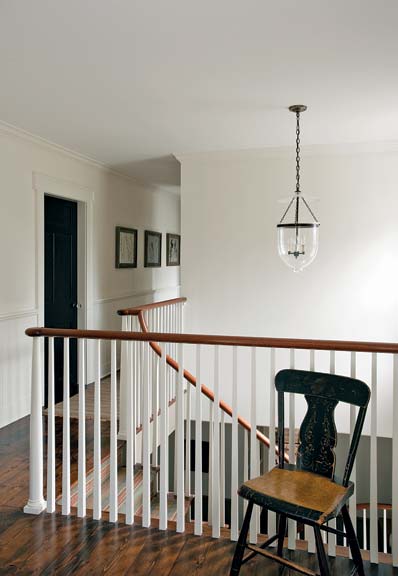 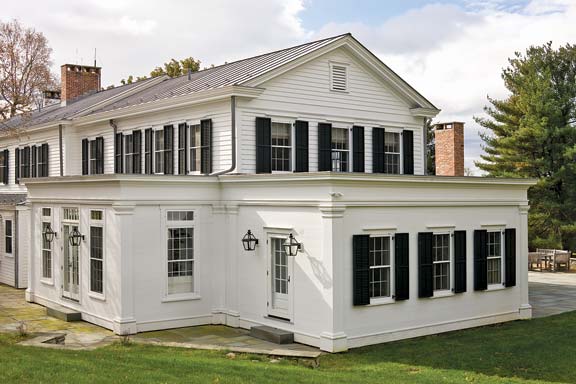 The owners had no preconceived notion of what they wanted in the house; they just knew they needed ample space for family and friends to come and visit, and wanted guidance with their decisions. “The old house really needed everything,” says Murray. There was no insulation in the walls, all the mechanical systems were antiquated—even the temple pillars had rotted through and needed to be replaced. “A large addition went onto the back of the house in the 1950s,” says Murray, “but unfortunately it needed to come off—there was nothing salvageable.”

Murray ended up razing the mid-twentieth-century addition and extending the massing of the main house by a third. This new addition is recognized through a slight offset of the roofline. In conjunction with the extended massing, Murray added three flat roof additions to the north side of the house. “We looked at examples of the Greek Revival style throughout the area to get ideas on how to approach the design of the new additions. Flat roofs were common on Greek Revival structures, often appearing in the front of the building,” notes Murray.

These additions incorporate a new kitchen and a breakfast room, family room, and guest suite just off the north side of the house. “We really wanted to create light-filled spaces in the new additions,” says Murray. The kitchen is situated on the east side of the house to catch the early morning light, while the family room, located on the west side of the house, takes advantage of the afternoon light. “We added a bank of windows, French doors, and transom windows to engage the spaces with the landscape,” notes Murray.

Although Murray wanted to preserve as much of the original fabric of the house as possible by keeping original windows, doors, and a pediment fanlight, it essentially had to be gutted. “We approached the process of the renovation by really peeling back the layers to the house,” he says. The old portion was taken down to the studs to install insulation and new plaster. “We restored as many historic windows as we could. We also incorporated bronze screens, screen doors, and removable storm sashes—there is no insulated glass, which adds to the authenticity of the house.” The only exception to the single-paned glass is in the French doors and transoms off the kitchen, family room, flower room, and mudroom, which are made with insulated glass.

Murray also redesigned the front hall stairs, creating a freestanding staircase. This open stair, which seemingly floats above the stair hall, makes the hall leading into the living room more spacious and creates a better proportion. A small antique chest and chair occupy the space under the stair, creating the perfect spot for keys and mail. The simple tapered balusters and curved newel create an understated elegance in the space. A second winding stair at the back of the house has a very simple articulation with a rounded, tapered newel post. A random-width scalloped wallboard becomes the backdrop.

The general contractor, George Carrothers of George Carrothers, Ltd., also rebuilt the four fluted columns in mahogany. “He assembled them as they would have been originally—in staved boards,” says Murray. The result of the restoration, renovation, and sensitive additions to the old Greek Revival is success—not only in its design and execution, but also as a warm and welcoming getaway for the homeowners to enjoy for years to come.