Off the coast of Georgia, just southeast of Savannah, there is a string of barrier islands dotted with saltwater marshes and maritime forests, bounded by sinuous rivers and the broad plane of the Atlantic. From Tybee Island in the north to Cumberland Island in the south, the islands are a stopping point for migrating shorebirds and a passageway for northern right whales heading to their winter calving grounds.

These islands have been the home of diverse communities: Native Americans, Spanish missionaries (who called them the “Golden Isles”), English colonists, and American millionaire industrialists. The region has played a significant role in American history, from providing rice to Boston’s Colonial soldiers during the Revolution to serving as a Civil War battleground. This is where Sherman’s “March to the Sea” concluded.

Between Ossabaw Island and St. Catherine’s Island, a secluded, environmentally conscious development has recently arisen. It is called Hampton Island, and its first home is a new Greek Revival known affectionately as the “Big House.” 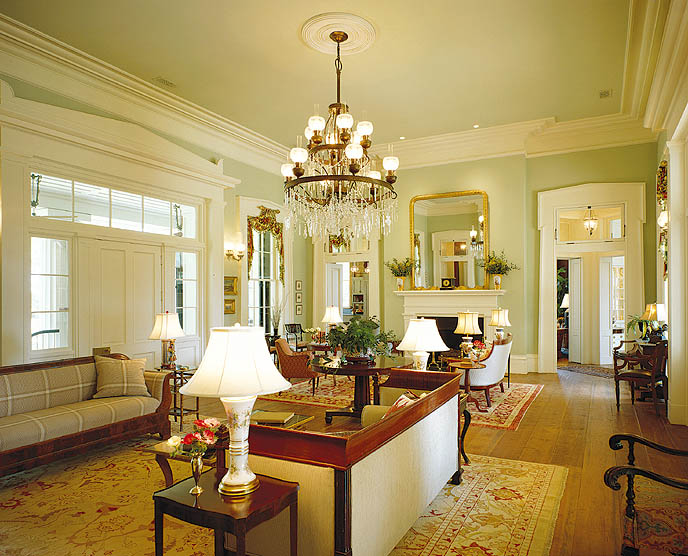 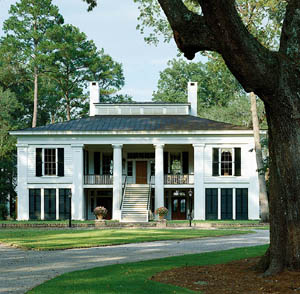 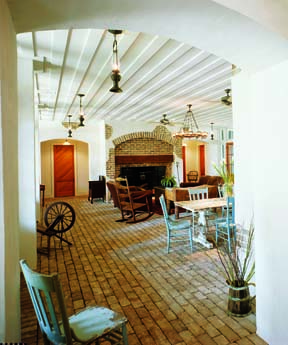 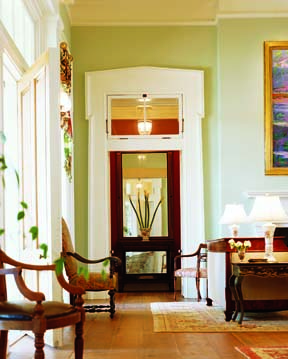 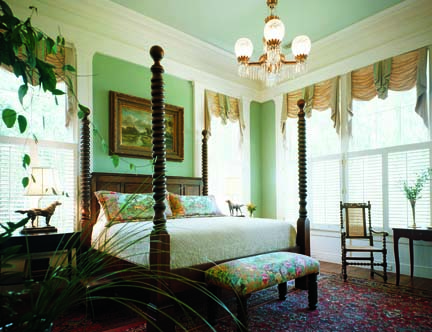 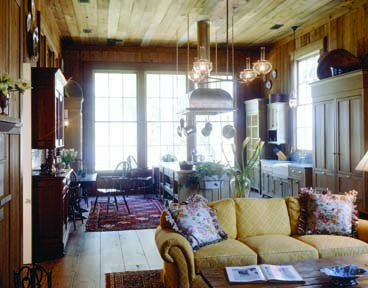 The house was initially intended as a compact one-bedroom hunting lodge for the property’s then-owner. Before building, the owner traced the lineage of the land and chose a location on the North Newport River at the terminus of the ancient Ferry Road, one of the oldest roads in the area. The owner then approached Jim Strickland, design principal and founder of Historical Concepts, a Peachtree City, Georgia, architecture firm.

Strickland and his design team knew they would need to modify the initial plans for the structure to better address the challenges posed by the site. “It was clear that with the possibility of tidal surge the house would have to be built up high,” Strickland says, “but doing so would change the dimensions of the house dramatically.” The result is a house fronted by Doric columns and raised on a redbrick pedestal that appears as if it were a plantation home from the region’s prosperous antebellum era.

The second floor has the more formal rooms, and the first floor is rustic and built with the threat of flooding in mind. There is clear precedent for such a design, as old homes in coastal Georgia were regularly built on raised-basement foundations. At the nearby Woodmanston Plantation—a rice plantation dating back to 1772—the now-lost main house was believed to have been built this way. The curators of Woodmanston Plantation acknowledge not only that such an arrangement affords flood protection but also that a raised foundation was believed to protect the home’s inhabitants from “harmful vapors.”

The entry to the Big House is through a second-floor veranda, up a grand set of stairs of which Scarlet O’Hara would approve. But inside, tradition meets with innovation. Rather than the entry hall and staircase one would expect upon entering a Greek Revival, visitors encounter a large centrally located living room.

Symmetry and formality are the overall aesthetics at play here, with doors and windows directly opposite each other and twin fireplaces flanking the room. The living room floors are salvaged 12″ heart pine. “They are not straightedged or tongue and groove,” Strickland points out. “They are hand-planed, fitted together by hand, and then rubbed with good old-fashioned wax, making them look like they have been here 150 years or more.”

Stylistically appropriate sidelights and transom lights are set into grand pediments around the front and rear doors, bringing in light and permitting views toward the river. Transom windows over interior doors allow for ventilation; Southern breezes blow through just as they have in Georgia homes for generations.

Four rooms radiate off the living room at the outer corners: the dining room, master bedroom, kitchen, and study. Traditionally, the kitchen would have been located on the first floor or in an out-of-the-way addition, but kitchens today are far too important not to be close at hand. This posed a challenge for Strickland, as the kitchen would be the most utilitarian room accessed directly off the living room.

“The relationship between the formal public rooms and the rustic private rooms was especially hard to achieve,” Strickland says. To ease the progression between the living room and kitchen, Strickland specified a faux finish on the back of the kitchen door to give its entry a more formal look.

The only set of interior stairs is in the kitchen, providing an appropriate transition to the unpretentious first floor. Unlike the sophisticated second floor, here rough plasterwork and a brick floor make the rooms feel ancient, as though they were part of an old summer kitchen and cellar. This comfortable, unassuming space houses a two-car garage, two storage rooms, and a large gathering room with a fireplace. The board-and-batten construction harkens back to the historical ferry piers that once stood just a few yards away.

The Big House is the crown jewel for Hampton Island, a development that has been called the first conservation-centered community in the state. It was created by Atlanta developer E. Wade Shealy, Jr. Soon after he and his business partners purchased the island’s 4,000 acres in 2003, Hampton Island Preservation, LLC, donated 826 acres to the Coastal Georgia Land Trust; 80 percent of the land has been placed into conservation easements so that it will remain undeveloped.

All homeowners on Hampton Island must go through an interview process and demonstrate a dedication to preservation before joining the community. In this way, the land’s natural beauty and character will be preserved and future generations will continue to enjoy one of Georgia’s little-known Golden Isles.