The Georgian-period mansion called Hamilton House is sited spectacularly on a bluff overlooking the Salmon Falls River. It was built ca. 1785 in South Berwick, Maine, by shipping merchant Jonathan Hamilton. A hundred years later, the house, decrepit but largely unchanged, became the summer retreat of Emily Tyson and her stepdaughter Elise. The women had been introduced to the Piscataqua area by writer Sarah Orne Jewett, owner of a historic house nearby, who wanted to find the right buyer lest Hamilton House be razed. (In a book, Jewett called the property “a quiet place that the destroying left hand of progress had failed to touch.”)

Along with Elizabeth Bishop Perkins and her mother Mary Soules Perkins, who were restoring an old house in York, these women all but created the Colonial Revival interior. Even before such icons as Henry Davis Sleeper’s Beauport, John D. Rockefeller’s Williamsburg, and Henry Francis du Pont’s Winterthur, the Maine women introduced motifs and conventions that still influence taste today.

Hamilton House, a property of Historic New England since 1949, has been interpreted as a quintessential Colonial Revival country estate to reflect the occupancy of the Tysons in the early 20th century. Restoration since the 1980s has been based on photos taken for House Beautiful in 1929. An amateur photographer, Elise Tyson also left documentation of the house and gardens.

The Tysons hired architect Herbert W.C. Browne of the Boston firm Little and Browne to oversee renovations and to design additions [removed in the mid 20th century]. Plumbing and a kitchen were new conveniences, but the goal was to keep as much original fabric as possible. The Tysons had reproduced the original pillar-and-arch wallpaper pattern for the stairhall, an unusual decision for this period. The women also wanted to re-create the gardens that, according to local lore, had surrounded the house. They created a large garden, decidedly Colonial Revival, which was surrounded by a pergola. By 1900, the major projects were done. 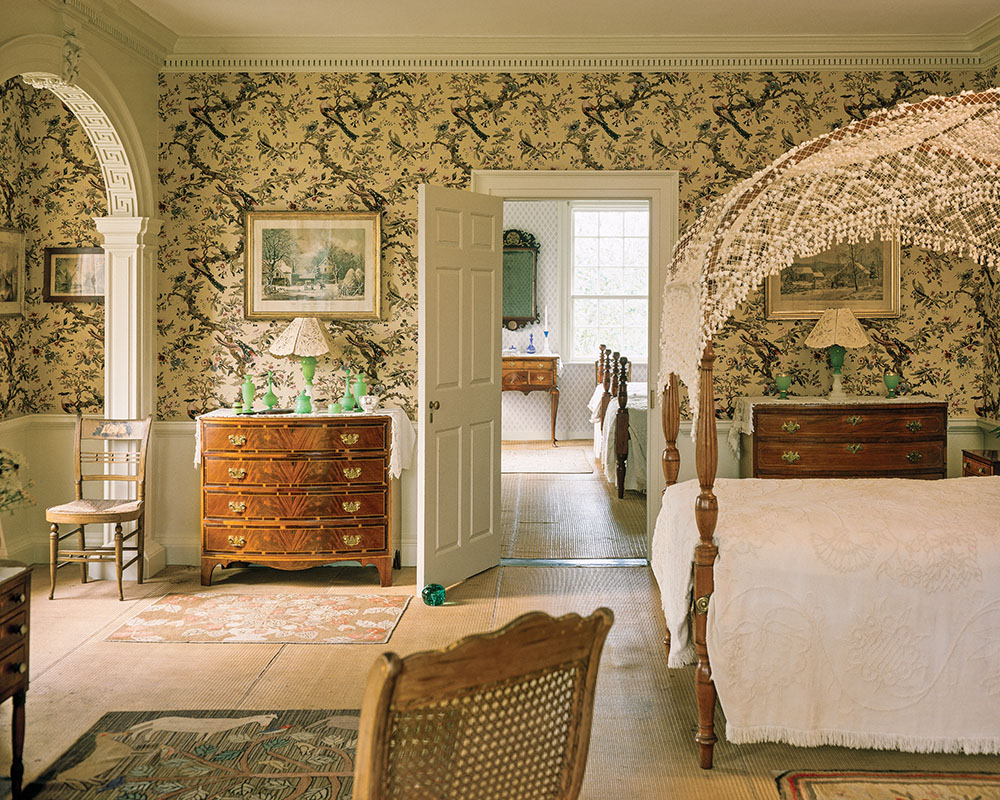 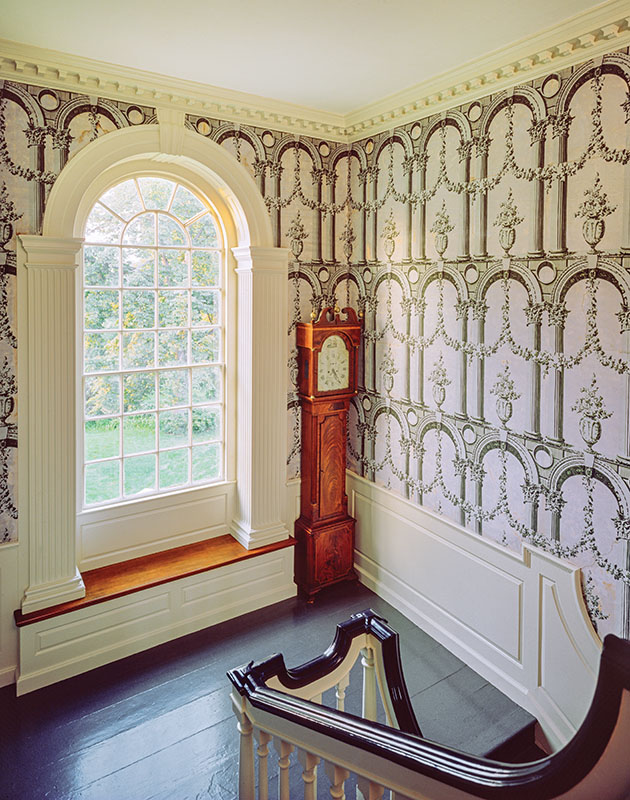 In the next decade, the Tysons commissioned murals in the main public rooms. Artist George Porter Fernald painted the watery blue-green scenes in classical Italian and French styles, but fancifully incorporated local landmarks and history. In the 1905 drawing-room mural, Hamilton’s ships are being unloaded onto wharves right in front of the imposing house.

The “restored” house was soon published. Critics raved about its “pure colonial” roots, its “atmosphere…of the olden time.” The house invoked the spirit of the past, but did not re-create it: The exterior was painted white with dark green shutter–blinds, which would become an enduring tradition. Inside, ivory woodwork provided a backdrop for iconic antiques, colored glass, hooked and oriental rugs, Currier and Ives prints, and Chinese lacquer and English japanned furniture chosen to represent the merchant trade. Painted furniture, straw matting, and white dimity curtains were typical for summer homes.